You are here: Home / Site News / Featured / London History: A Look at The London Underground During World War II 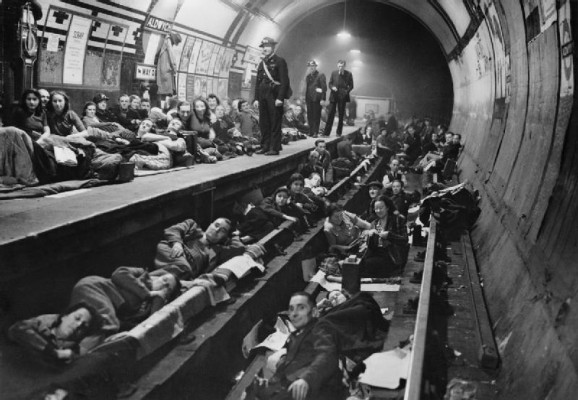 Millions of people travel on the London Underground every day, but few of them have ever taken shelter there or know fully how their everyday commute played such a large role in World War II. Of course, most people know about Londoners taking shelter in the stations during the London Blitz or secret bunkers hidden away from the danger of bombs, but there’s even more than that. As it turns out, the Underground played a vital part of Britain’s war effort in many areas: sheltering the people, providing leaders with a base of operations, and even producing the weapons that the nation used to defend itself.

To start off, the idea of the London Underground as a bomb shelter wasn’t a new one by 1940. During World War I, German zeppelins and Gotha airplanes had bombed the city and forced people to take shelter in the tunnels. At this time, the Underground lines were mostly owned and run by separate companies, all of which were merged together with the bus system in 1933 to create the London Additionally, the government had taken the position between the wars that the use of the stations as air raid shelters should be actively discouraged.

To that extent, when the bombing started, the Ministry of Home Security sought to build about ten air raid shelters throughout the city with the facilities and bunks to house thousands of people. However, while ten were planned, only eight were actually constructed, and what’s more, while they were adjacent to the Tube stations, most of them were used by the government until five were opened to the public in 1944.

As a result, a majority of Londoners seeking shelter continued to use the Underground. Meanwhile, a test of the air raid siren and anti-aircraft missiles on 3 March 1943 led to a panicked rush on the Bethnal Green Station for shelter which ultimately resulted in the deaths of 173 people. It easily became the highest civilian loss of life during the war (as well as being arguably the single worst disaster in the Underground’s history). While the government at first attempted to prevent the use of the stations and tunnels as shelters, it eventually relented as thousands continued to use them anyway and some people would even squat in the tunnels to sell prime spots to the highest bidders. The government then started regulating and policing the stations as well as handing out tickets to prevent overcrowding.

The government also made use of certain tube stations for its administrative offices and for the military during World War II. Most notably, the Brompton Road Tube Station, which had permanently shut in 1934, was reopened during the war as a station for the 1st Anti-Aircraft Division to defend the city. The front of the station was bricked up and turned into offices, while the tunnels became the division’s operations centre. It was subsequently given to the Territorial Army after the war, and the main building was demolished in 1972. When Blue Peter paid the remaining parts of the station a visit in 2000, they still found maps and other war memorabilia in place. What’s more, even the Americans were able to use some portions of the Tube as a base, including the Goodge Street Station, which served as a base for General Eisenhower. South Kensington was also used by the government for various purposes from a signaling school to storing equipment used to study time-delay bombs.

As the Blitz had done significant damage to factories and other key pieces of British infrastructure, some of it was relocated to the Underground to protect from further attacks. Several stations were converted to manufacturing of aircraft components and other necessary items for the war effort, such as Earl’s Court and Gants Hill. The latter of the two had an entire section of the Underground converted to its use between that station and the Leytonstone station, even utilising the tracks to move people and components from one end of the factory to the other. In yet another use, the long-disused Aldwych station, which is often now used for filming scenes in need of an older station, housed plenty of great British treasures. The British Museum housed a number of exhibits and works of art there, including the Elgin Marbles, in order to protect these national treasures from the Nazi war machine.

Thus, beyond the uses that many people know about, the Underground served Britain during World War II in a variety of roles. It not only sheltered London’s citizens, but also Britain’s great works. It aided the war by providing the British military and its allies with a place to operate as well as giving its factories work space to continue making vital components to fighting the war.