You are here: Home / Site News / Featured / Down the Pub: 10 Interesting Facts and Figures about London Pubs You Might Not Know 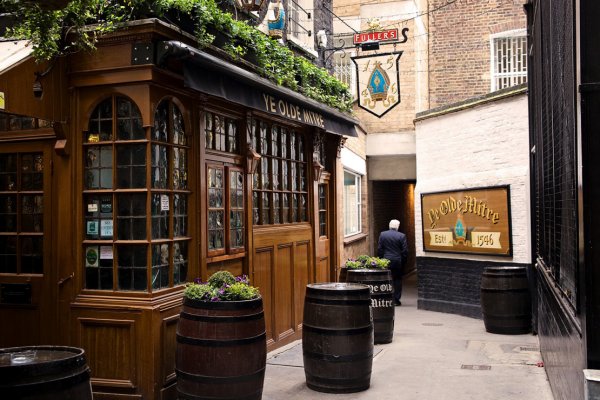 People visit London for plenty of reasons. They love the parks, the theatres of the West End, the museums, and the monuments to history. One experience anyone visit London must have is to experience a real London pub. The first pubs were established as ale houses during the Medieval period, and were actual houses where the homeowner would serve ale he brewed to paying customers. Additionally, inns began to appear that served ale and gave travelers a place to stay. Over time, ale houses became public houses, or pubs. Today, you can find one on nearly every block of London, serving all many of domestic and foreign ales, with some pubs owned by the same family for centuries, while others are managed by corporations. So what interesting facts can we find in the pints of London’s pubs?

Pub for the Off-Key

The Coal Hole pub was named for the coal leavers, workers who unloaded and moved coal by the River Thames. Before it received its current name, it was a private social club called The Wolf Club, and the only way to become a member was for your wife to bar you from singing in the bath. However, this may have just been a pretense for those henpecked husbands to drink a lot in the company of loose women.

Plenty to Choose From

The nursery rhyme, “Pop Goes the Weasel”, actually refers to the act of having to pawn your suit after spending all your money in the pubs of Clerkenwell. One version of the rhyme had the line “Up and down the City Road/In and out the Eagle/That’s the way the money goes/Pop goes the Weasel!”

It’s not unusual for pubs to have some rich and famous owners. The Limehouse pub known as The Grapes is actually owned by none other than Sir Ian McKellan.

The “porter” style of beer was “officially” invented at the Bell Brewhouse in Shoreditch by Ralph Hardwood in 1722. Prior to that, an ale known as “Three Threads” was a popular choice and was a mixture of pale ale, brown ale, and strong ale. This origin and the name are subject to some speculation and myth. However, as porter started getting popular in England, Arthur Guinness began to make his own version at St. James Gate brewery, producing a stronger version known as Guinness “Extra Stout”.

Five of London’s Underground stations are named after pubs that used to be nearby. These include: Angel, Elephant & Castle, Manor House, Royal Oak, and Swiss Cottage. Of these, The Angel and The Elephant & Castle are the only surviving pubs to share their name with a Tube Station.

Some pubs in Smithfield and Borough, such as the Fox and Anchor and the Market Porter, are licensed to serve alcohol beginning at 7AM. The reason for this is that it fits in with the hours worked by market porters.

Japanese bank Nomura owns 5,000 pubs and another 2,500 off-license shops, making it the owner of the most alcohol-selling establishments in the city.

The oldest pub in London is a much-contested title and historians don’t seem to be able to resolve up. Some believe Ye Olde Mitre (believed to have been built in 1546) is the oldest, while others think it could be the Lamb & Flag (with a pub occupying its building since the 17th Century). Meanwhile, under the belief that less is more, some believe The Rake is the smallest pub in the city, though the pub itself disputes this claim. Meanwhile, the Guinness Book of World Records gives the title to The Dove, which has a small room with a bar (as well as a larger room and a patio), not only making it the smallest in London, but the smallest in the world.