You are here: Home / Culture / Buildings / Great London Buildings: Paddington Station – One of the Most Iconic Victorian Train Stations 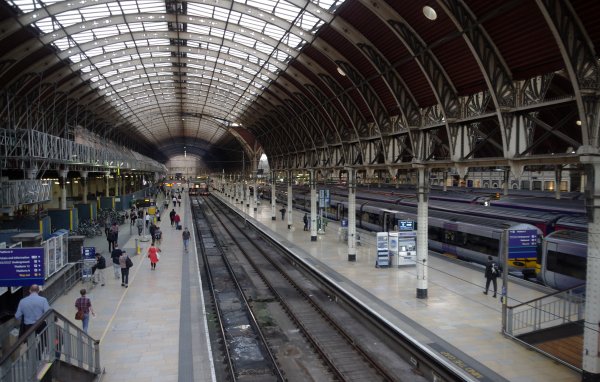 Editor’s Note: This is the start of a new ongoing series at Londontopia about London’s most iconic buildings. We’ll explore their fascinating histories.

Most people who don’t live in Britain or even London might hear the word Paddington and think of a bear that loves marmalade. Officially named London Paddington, this railway station on Praed Street began its life in 1834 when a temporary station was constructed as the London terminus for the Great Western Railway. It was located on the west side of Bishop’s Bridge Road and served the line while the station proper was being built. Once the current station was constructed, the temporary station became a storage depot.

The station as we know it today was designed by none other than Isambard Kingdom Brunel. Brunel was one of the preeminent architects of 19th Century Britain. In fact, some of the major railways, tunnels, and bridges in the UK were designed by Brunel, including the Thames Tunnel, the Clifton Bridge, and, of course, the Great Western Railway. The railway was founded in 1833 and ran from London to Bristol (and eventually Exeter). Brunel’s idea was that someone could board the railway in London and travel to New York, after boarding the Great Western steamship in West Wales.

Paddington Station was begun in 1850 and opened on 29 May 1854. Brunel was praised for his design and a statue of him was placed on the concourse (thought it was eventually moved to platform 1). The station features a 699-foot long glazed roof with wrought-iron arches in three spans which are supported by two transepts connecting them. It was originally believed that they were added to accommodate traversers to carry coaches between the tracks of the station, though no one has found any evidence to support that notion.

Under the three spans are the stations original lines, with platforms numbered 1-8. The station added another eight lines, beginning with platforms 9-12, in 1916. Platforms 6 and 7 are dedicated to the Heathrow Express, which runs from Paddington Station to the airport. Befitting the time in which they were built, span 4 has a more Edwardian architecture that has necessitated refurbishment in recent years. Platforms 13 and 14 are part of the old Metropolitan Railway station on Old Bishop Road and can only be used by local lines. Meanwhile, platforms 15 and 16 are dedicated to the London Underground and specifically the Hammersmith & City line.

In 1922, Viscount Churchill (not Winston Churchill, but Victor Spencer), who was then the chairman of the Great Western Railway, dedicated a statue depicting a WWI soldier reading a letter on Armistice Day. The statue was meant to honour the GWR employees who lost their lives. Another of the station’s famous statues would be inspired about thirty years later and would become one of the station’s biggest tourist draws. In 1956, Michael Bond, then a cameraman for the BBC, wrote the first of the Paddington Bear stories.

Bond was inspired to write the story after purchasing a lonely stuffed bear for his wife from the nearby Selfridges on his way home from work through Paddington Station. Bond was also inspired by memories of children being sent away from London during the Blitz, as the evacuees passed through his hometown of reading with little more than a suitcase and their names on tag attached to their coats, which is how Paddington is first described in A Bear Named Paddington. In 2000, a statue of Paddington Bear, designed by Marcus Cornish, was installed on the concourse, depicting Paddington with his trademark hat and his tag sitting on a suitcase.

One of the station’s biggest and most grim mysteries happened in 1961, when the body of a small child was found in a suitcase with paper stuffed in his mouth. No culprit was ever apprehended. Beginning in the 1990s and continuing into the 21st Century, plenty of renovations were made to the station, including the fourth span, which was altered slightly to maintain the character of the original architecture while permitting more daylight to enter the station. Today, the station continues to serve thousands every day and millions each year.