You are here: Home / Culture / Art / 10 Interesting Facts and Figures about the Victoria and Albert Museum You Might Not Know 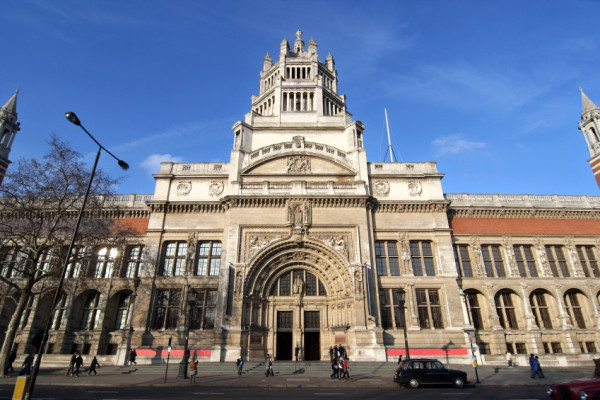 Founded in 1852, this museum of architectural and decorative arts was named after Queen Victoria and Prince Albert. One of the many buildings in Kensington that spotlights the pair’s love and patronage of the arts and sciences, it was part of the area known as “Albertopolis”, in the prince’s honour. Originally part of the Great Exhibition, it continues on to show great works of architecture from the past and present and, like other national museums, is free to the public. Boasting an enormous collection, you are guaranteed to find many interesting facts in its galleries.

The museum itself covers approximately 12.5 acres of land with 145 galleries. The V&A collection includes roughly 4.5 million objects spanning 5,000 years of art from ancient times to the modern era. During 2013-2014, the museum received 3.2 million visitors.

When it first opened, it was still known as the Museum of Manufactures, a holdover title from the Great Exhibition. When the collections transferred over the museum’s current site, it was renamed the South Kensington Museum, though Queen Victoria wanted to name it the Albert Museum. It wouldn’t change names again until 1899 when Queen Victoria made one of her last public appearances to lay the foundation stone of the Aston Webb building, when it was christened the Victoria and Albert Museum.

The V&A holds the world’s largest collection of art from children’s author Beatrix Potter. The collection not only includes her drawings, but also manuscripts, correspondence, photographs, and other related materials. The collection was donated to the museum following the death of its owner, Leslie Linder, an engineer who was a great collector of Potter artefacts. He was the first person to break the code that Potter used to make notes in her diary and published a number of works about her.

When the museum’s current building first opened, some space was made for collections from the National Gallery, which had run out of space at its Trafalgar Square museum. Perhaps feeling a bit territorial, the National Gallery asked to have its own entrance that was separate from the V&A.

The Victoria and Albert Museum was actually the first to have a public restaurant. The restaurant was the idea of Henry Cole, the museum’s first director, and was located in the Gamble Room. The Gamble Room was one of the first places in the museum visitors entered and Cole wanted them to be amazed at its design. The restaurant had first and second class menus, as well as a third class menu for “mechanics and all workmen employed at the Museum Buildings and even for humble working class visitors.”

The V&A was the first museum to have interior gas lamps that enabled night visits as well as permitting laborers to work into the evening.

Robert Lowe, the Chancellor of the Exechequer from 1868 to 1873 wasn’t a fan of Henry Cole, or more specifically, how much money Cole was spending on the V&A. In 1871, the Treasury Office discovered the Mr. Simkins, the museum’s accountant, was embezzling funds. Lowe used the incident to push for Cole’s removal as the museum director in 1872, but the Ministers of the Commons Public Accounts Committee refused to sack him. The next year, in 1873, Lowe attempted to have the British Museum absorb the V&A, but that was also unsuccessful. Both Lowe and Cole retired later that year.

There was a pneumatic railway planned for the museum in 1872 that would carry visitors from the South Kensington Underground station to the museum and the Royal Albert Hall, but it was never built. An Underground station was constructed on nearby Brompton Road in 1904, but it was determined to be uneconomical and closed in 1934. The 26th Anti-Aircraft Brigade used it as a command centre during World War II and now it’s been sold to a developer to turn into flats.

One of the artworks in the museum’s collection is the Tippoo’s Tiger, which was made for Tipu Sultan the ruler of Mysore in India. It depicts a tiger pouncing on a man and has long been a very popular exhibit at the museum, in part for its interior organ that mimics the growls of the tiger and its victim’s moans.

Put on a Show

The V&A museum staff puts on an annual pantomime at its Christmas party, providing a satirical review of the year’s events.