You are here: Home / Columns / Exploring London / 10 Random Facts and Figures about the River Thames That You Probably Didn’t Know

The River Thames, for centuries it’s been a much of a London landmark as any of the city’s man-made structures.  A major trade route and lifeblood for early Londoners, here are a few facts and figures about that river that you may not have known.

The River is tidal in some areas and non-tidal in others, meaning that it is subject to tides as much as the ocean.  The non-tidal part goes from the source about a mile north of the Village of Kemble to Teddington and tidal from that point until it flows into the Thames Estuary, which is part of the North Sea.

Two-thirds of London’s drinking water comes from the River Thames.  It is said that a drop of rain falling into the Thames at its source in the Cotswolds will be drunk by at least eight people before it flows into the Thames Estuary.

There are a total of forty-four locks along the River Thames.  The first is St. John’s Lock near the Town of Lechlade, Gloustershire.  The last lock is at Teddington in the County of Greater London.  From 1984, the World’s Poohsticks Championship has been held at Day’s Lock.  Pooh Sticks is a game deriving from A.A. Milne’s book “The House at Pooh Corner”, in which contestants drop a stick into the water simultaneously from a bridge, and whoever’s stick appears on the other side of the bridge first is the winner.

Over 200 bridges cross the river.  The first was built in London by the Romans almost 2000 years ago, near to the spot where London Bridge is now.  Many other bridges are built where older bridges were founded.  Westminster Bridge is painted the same shade of green as the leather benches in the House of Commons.  Waterloo Bridge is the longest in the City of London at 1,250 feet.

London Bridge is Falling Down

King Henry II commissioned the first London Bridge, with work beginning in 1176 A.D.  He dedicated it to his friend and political opponent, Thomas a’Becket, the Archbishop of Canterbury.  Many buildings were erected on the bridge, totaling 200 by the Tudor Dynasty, with some buildings reaching seven stories high and jutting out seven feet onto the river on either side.  The famous nursery rhyme details several of the bridge’s collapses.  Driving on the left was first required in 1722 when traffic became too congested on the original London Bridge.  Following an Act of Parliament in 1758, all houses and shops on the bridge were demolished.  Eventually the bridge itself was torn down and a new one erected in 1831. The Victorian-era bridge was eventually torn down itself and sold to the Americans where is now sits in Arizona (it is an urban legend that the owner thought he was buying Tower Bridge). 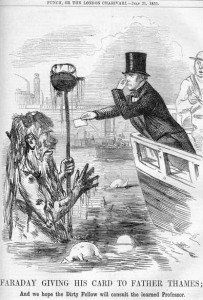 Much of the city’s waste was dumped into the River Thames before Sir Joseph Bazalgette built London’s sewer system in 1865.  In 1858, the stench from all the sewage in the river was so bad that Parliament had to be suspended. This event was called “The Great Stink” and it led parliament to act in creating a sewer system for London, much of which is still in use today.

At least one body per day is fished out of the Thames.  In 1795, Mary Wollstonecraft (feminist and mother of Mary Shelley), threw herself off of Putney Bridge after her lover left her for an actress.  She survived the fall and her unconscious body was pulled out of the river by a boatman.

Approximately 119 different species of fish inhabit the River Thames.  Some of the creatures that live in the Thames include otters, river voles, and European eels.  Jellied eels are considered a traditional East London dish.

The Thames has been the inspiration for many artists.  French Impressionist Claude Money painted the river three times, his most famous painting being “The Thames Below Westminster”.  Kenneth Grahame was inspired to write “The Wind in the Willows” from the Thames and lived in the Village of Pangbourne on the river’s banks.