I’m fortunate to have been on all of the London Transport Museum ‘Hidden London’ tours of disused stations and tunnels but not everyone has had that opportunity. The tours are only available on certain dates (not all year round), and the (sometimes) long climbs may have put you off. Some say the tours are expensive (I think they are exceptional value) and also, children can’t go on the tours for health and safety reasons. So the London Transport Museum had an idea: to try and recreate an abandoned tube station within the museum. And this is that exhibition.

Hidden London: The Exhibition is open from 11 October 2019 to reveal secrets of disused Underground stations. The largest number of rare archive photos, objects, heritage posters, secret diagrams and decorative tiles from disused stations that have been brought together in one location to help us discover ‘forgotten’ parts of the tube network. You can feel as if you are visiting a disused station in this immersive exhibition as the walls appear to be black and grubby, the information posters appear to be creased and dirty, the stairwell is dark, etc.

The exhibition explores why some stations were abandoned, how others have been adapted for new uses and uncovers stories about living and working underground. The transport system’s evolving history has meant some stations have become redundant, while others were never completed. Stations closed because of changes in population, new and expanding Underground lines resulted in lower passenger numbers at certain stations such as Aldwych, economic priorities and political pressures.

Aldwych station was shut on 30 September 1994 and you can see the poster that informed passengers of the closure. The £3 million cost of replacing the lifts couldn’t be justified for the 450 people using the limited service each day. 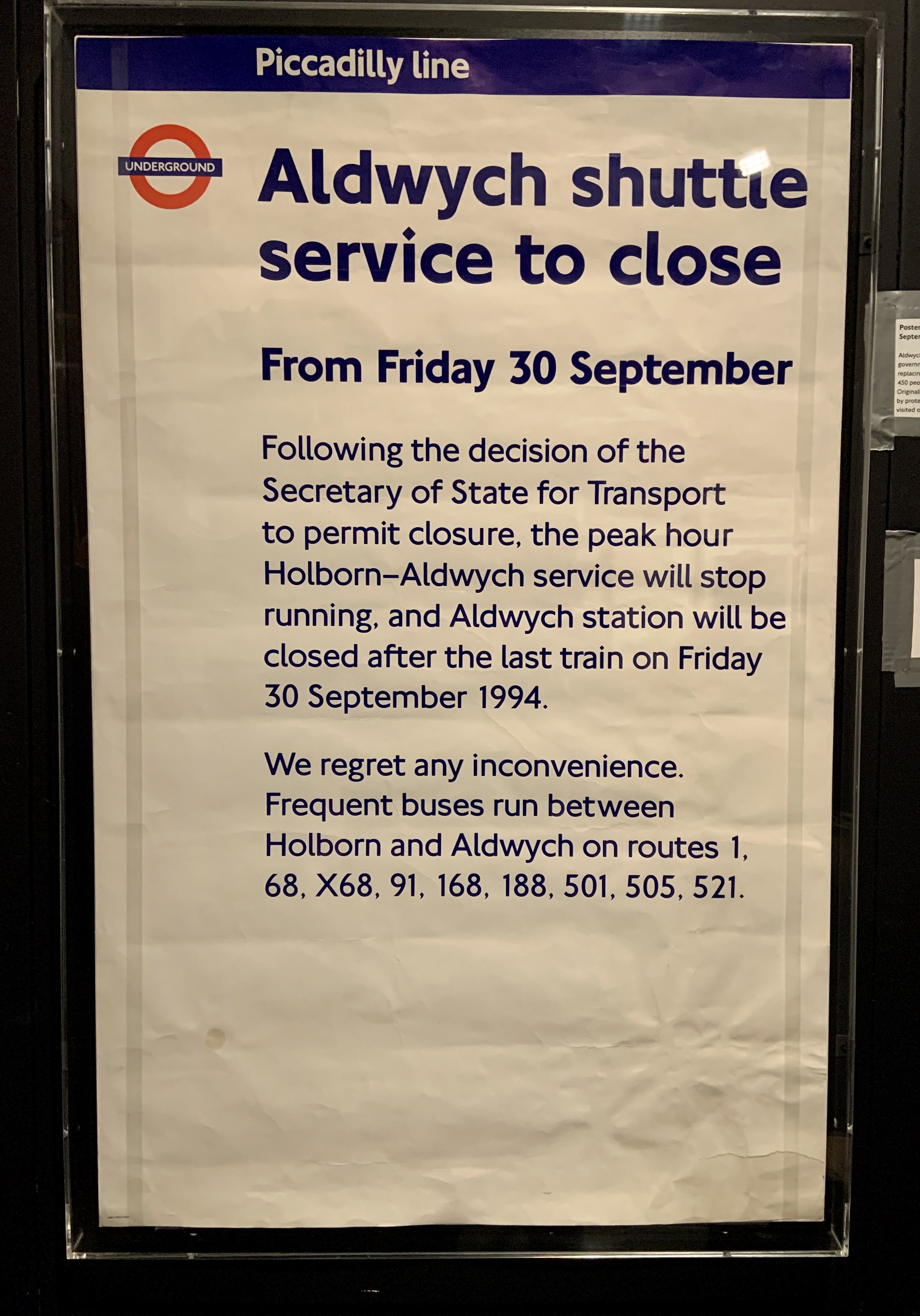 As you enter, you get to see the historic abandoned ticket hall at Aldwych station with an original 1930s ticket booth and its famous Leslie Green tiles. There’s audio of an interview with Robert Elms from the staff at the time of the closure. 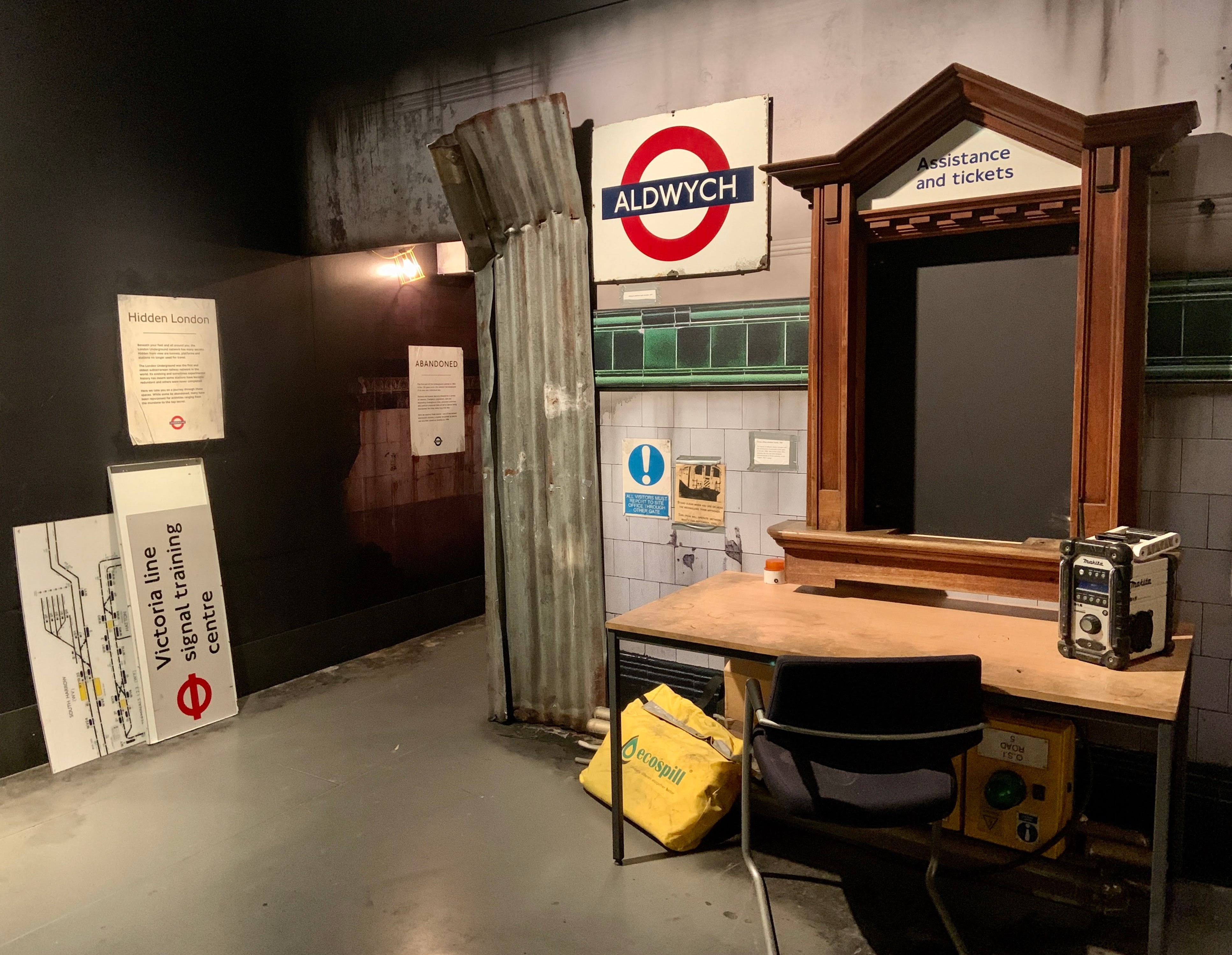 You can see architectural drawings of The Strand station as Aldwych was known when it opened in 1907. And do check the map of disused stations on the wall in this section. It’s always worth remembering, the London Underground was the first and oldest subterranean railway network in the world.

Oh, and do look out for the weedkilling train poster. It took me a while to remember that a lot of the Underground network, outside of central London, is actually not underground so, of course, weeds would need to be dealt with on those lines. 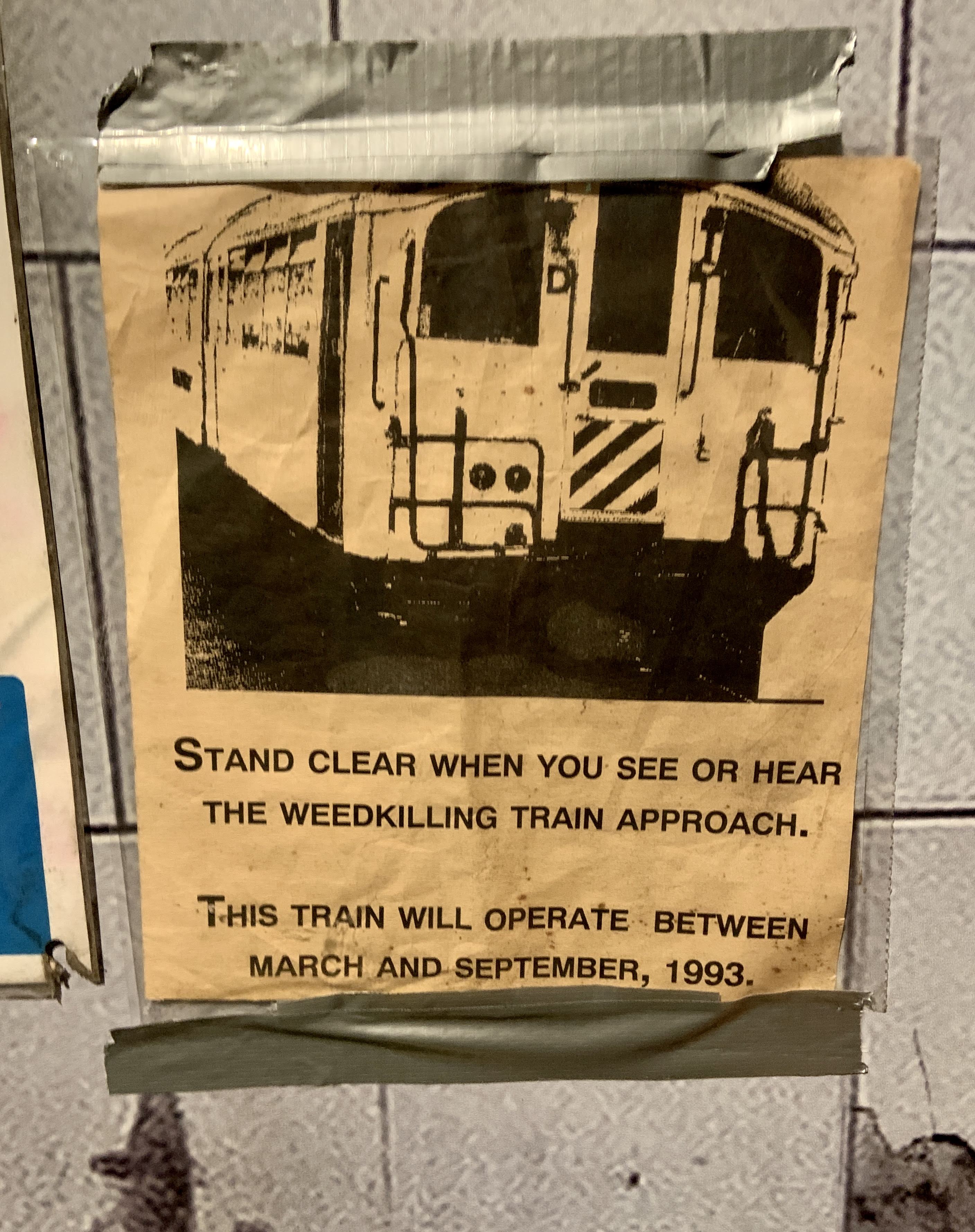 The exhibit captions are fixed to the wall with heavy-duty duct/gaffa tape to keep the industrial-feel, and the information posters look dirty and creased (they’re not really). 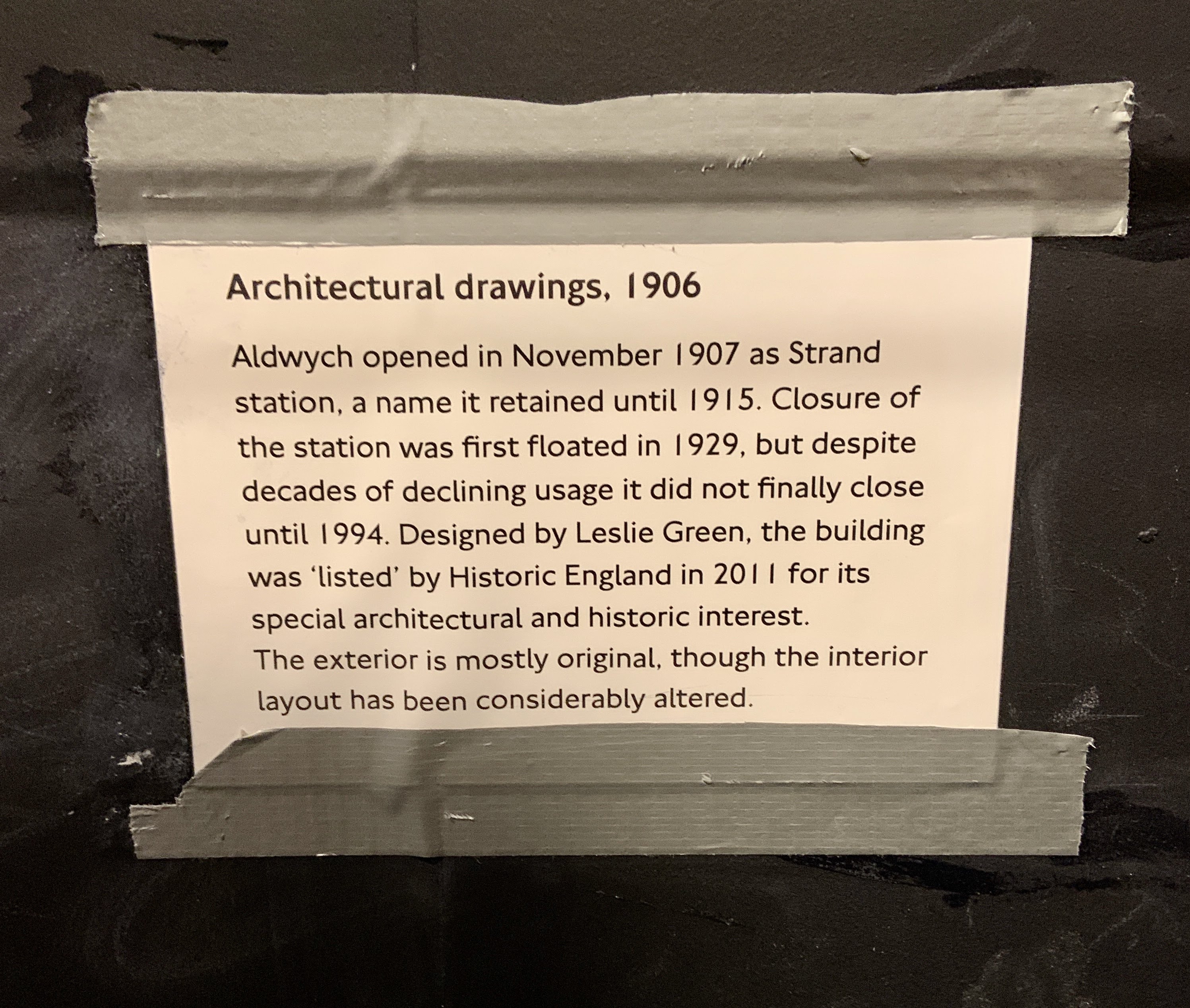 The next section is about King William Street station in the City of London that opened in 1890 as part of the first electric tube railway. It was abandoned in 1900 after being open for just 10 years as its platforms pointed the wrong way for a northwards extension.

The Underground Group unsuccessfully tried to sell the station platforms, which can be seen in newspaper cuttings from the time. The Daily Mirror writer suggested using the space for farming, something that became a reality elsewhere on the network 80 years later. 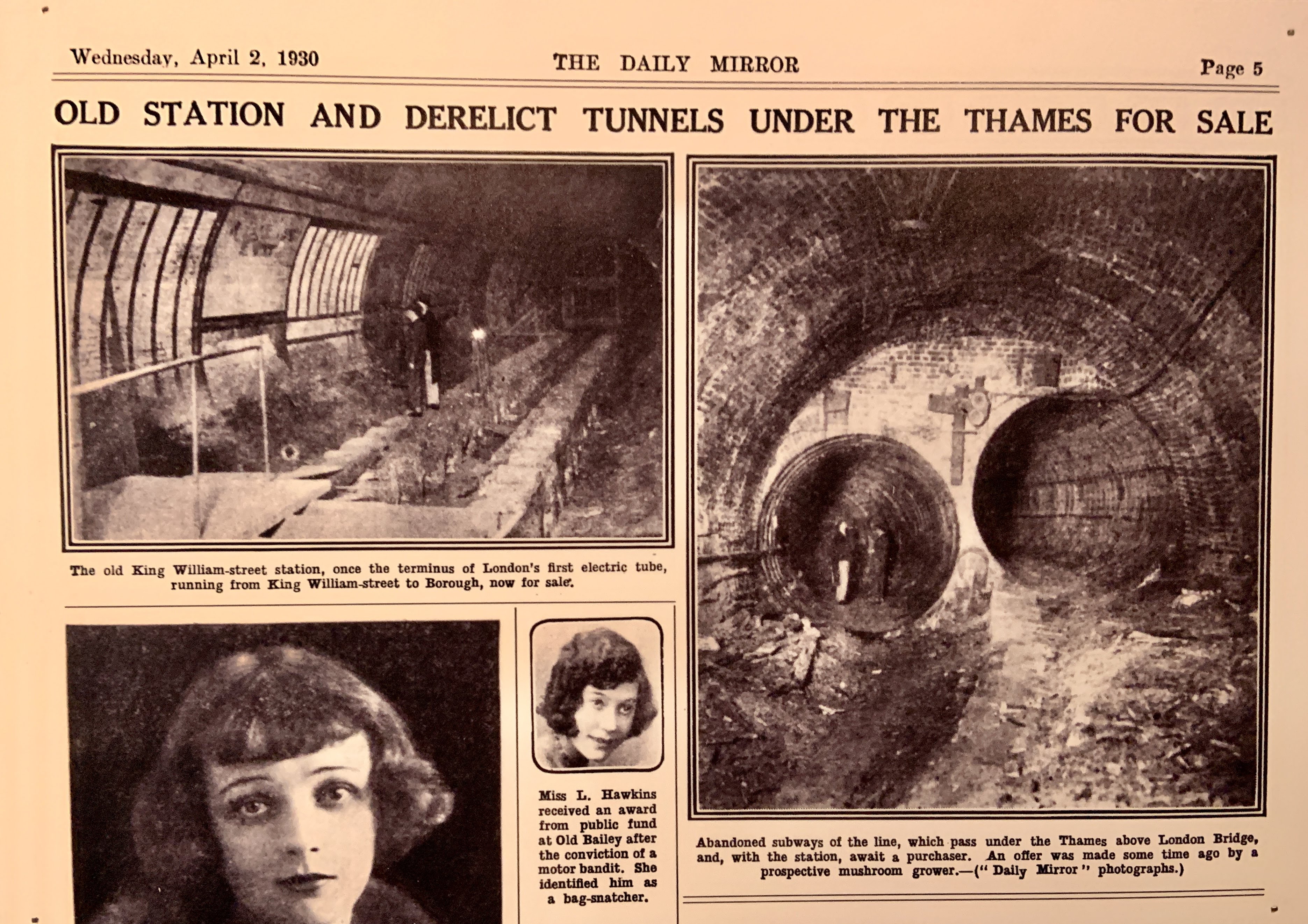 The ongoing Bank station upgrade has removed the last traces of King William Street station but on display here you can see the hand-drawn architectural drawings to convert the station into an air raid shelter in 1940.

There’s then a look at Highgate where the Northern Heights extension project was planned in the 1930s but World War Two stopped the work. Highgate’s brick tunnels haven’t had a train pass through them since 1970. Reclaimed by nature, the area is now home to a protected bat habitat – which you can exclusively visit with London Transport Museum’s Hidden London tours in the summer. Bat numbers are increasing and five different species have been found.

There’s also a look at Ongar station on the Central line. All distances on the Underground are still measured from Ongar, the network’s most easterly point, even though the station has been closed for 25 years. 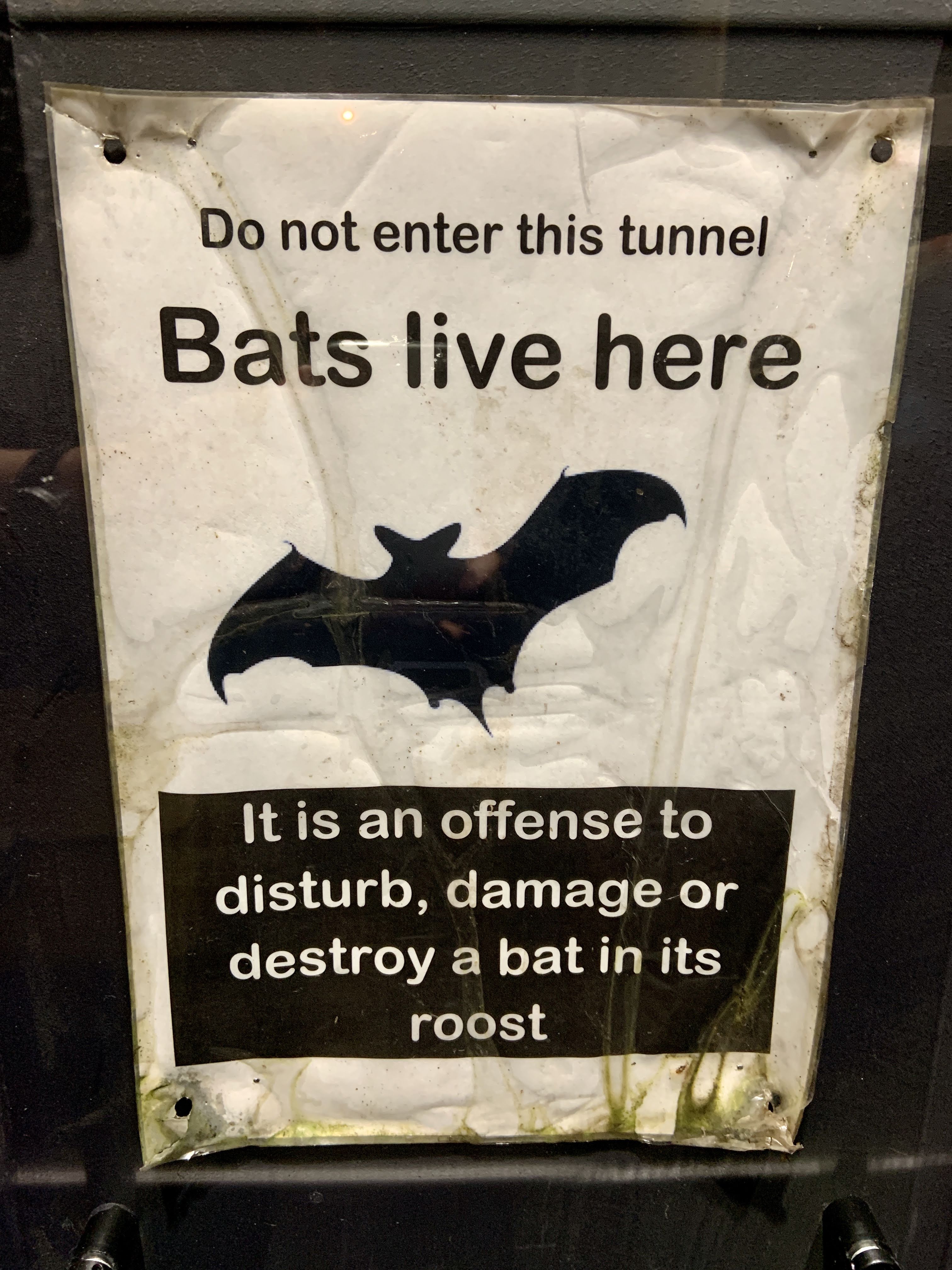 London Underground has served as a location for movie makers since the 1920s and is still used for filming today. Here you can see film posters and take a seat to watch clips of movies filmed in disused stations and tunnels. 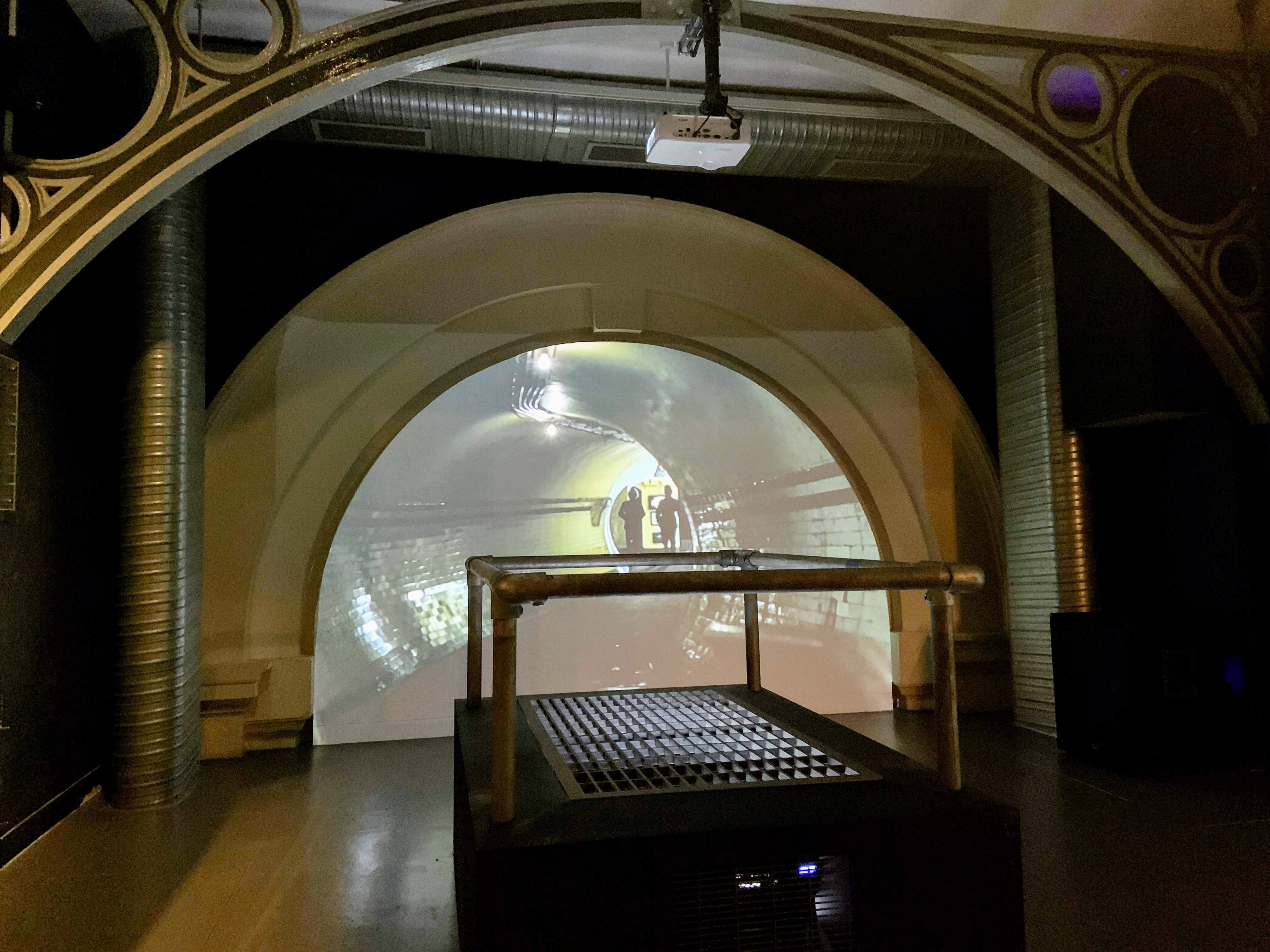 Do look down into the grille to the (projected) platform below to continue that feeling of being in a station. 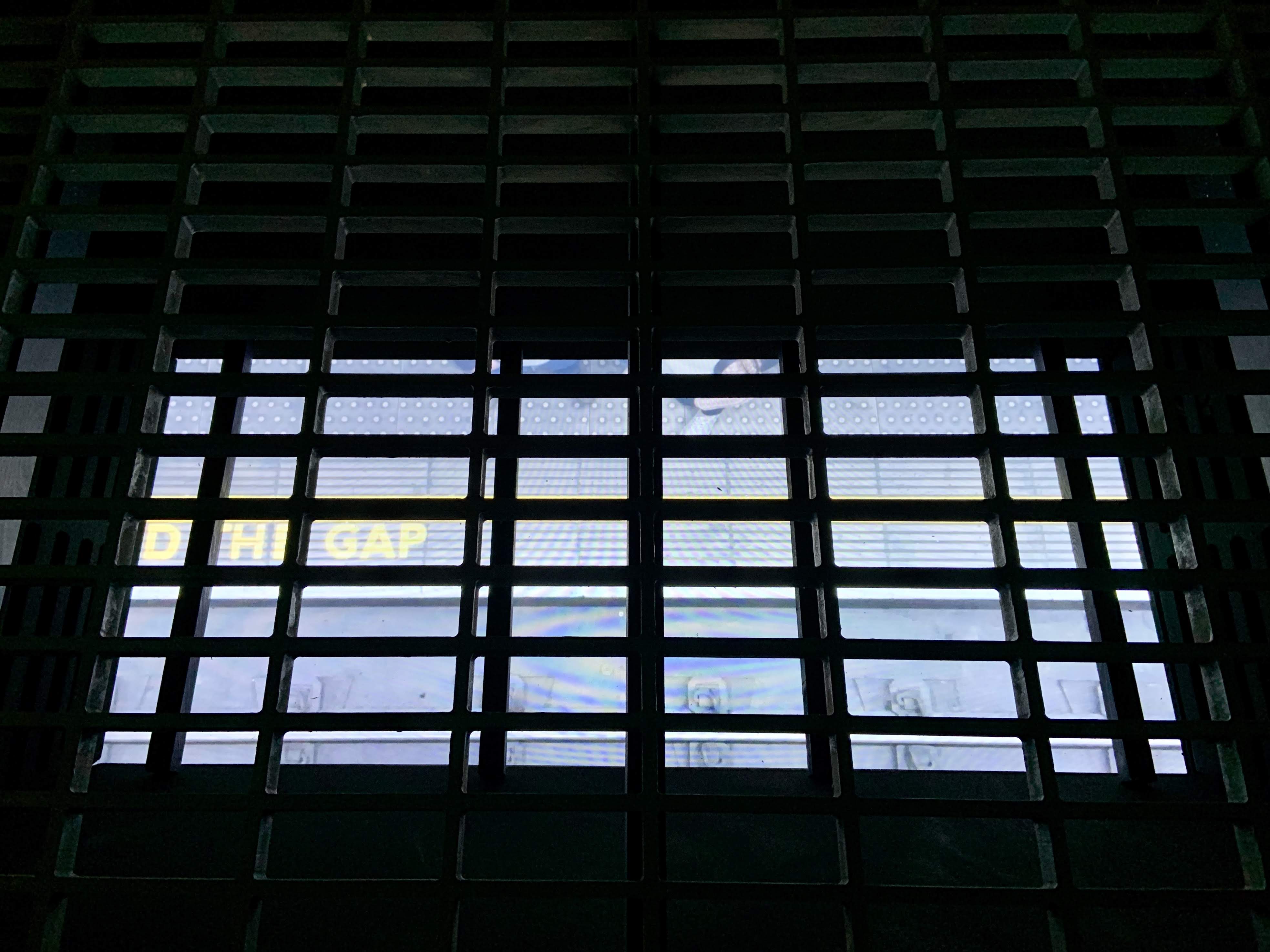 Head down the stairs (the stairs are perfectly safe, the safety tape has only been added to add for the scene-setting).

You can try your hand at being a wartime Telephone Exchange Operator as they race against the clock to connect incoming callers to the appropriate government departments. 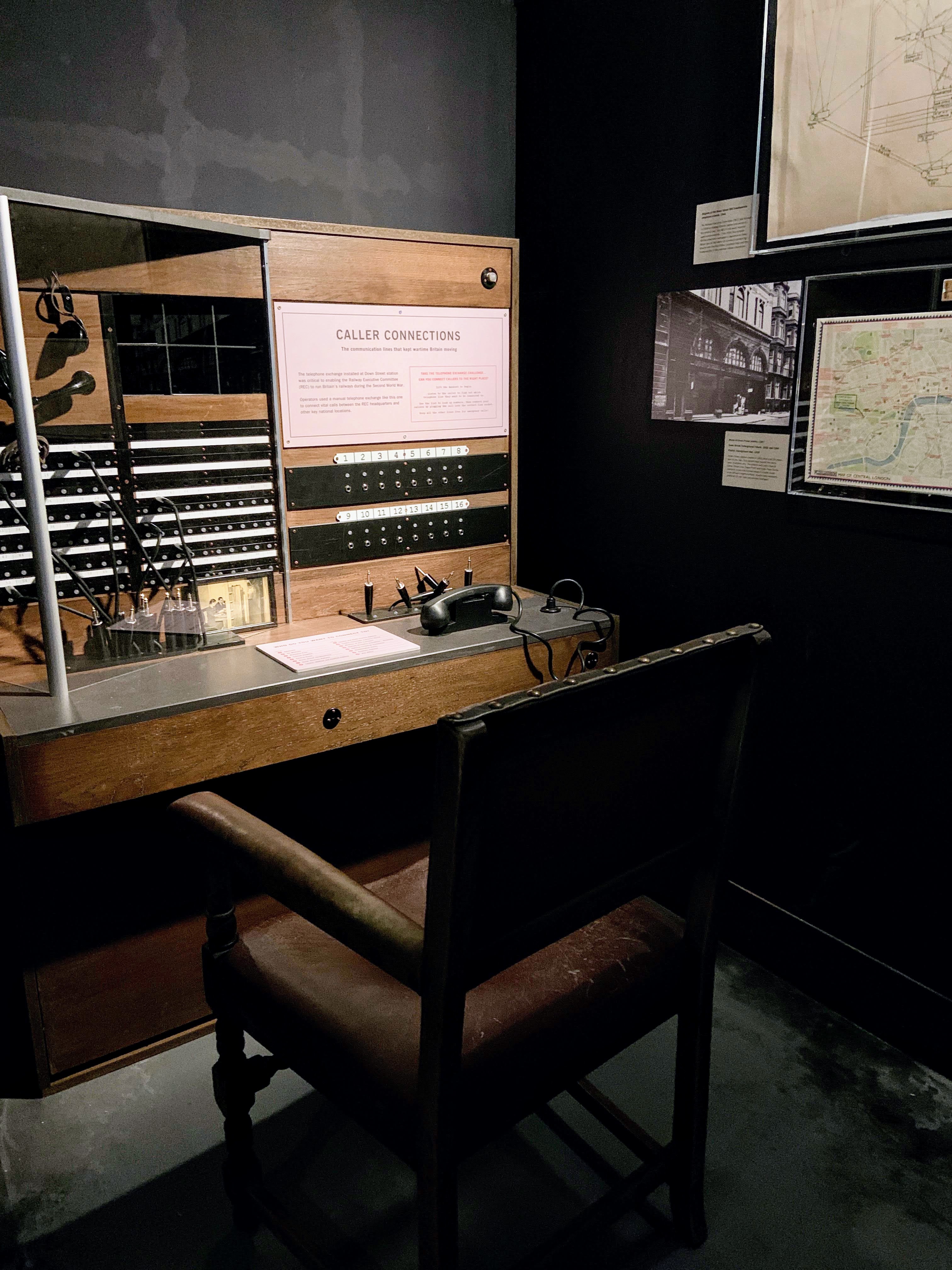 And then wander into a recreated secret-life-size underground dining room as it would have been at Down Street station during World War Two. Underground stations were ideal locations for secret activities in times of crisis and Down Street station was turned into the bomb-proofed offices and accommodation for the Railway Executive Committee, who took over Britain’s railways during the war. Prime Minister Winston Churchill also used the underground space to work, dine and sleep safely while both 10 Downing Street and the Cabinet War Rooms were being reinforced and repaired.

The dining room has replica tables, chairs, wine bottles, menu cards and ashtrays like those Churchill would have used. Despite rationing, Churchill was served the best caviar, Champagne, brandy and cigars; courtesy of the railway hotels. 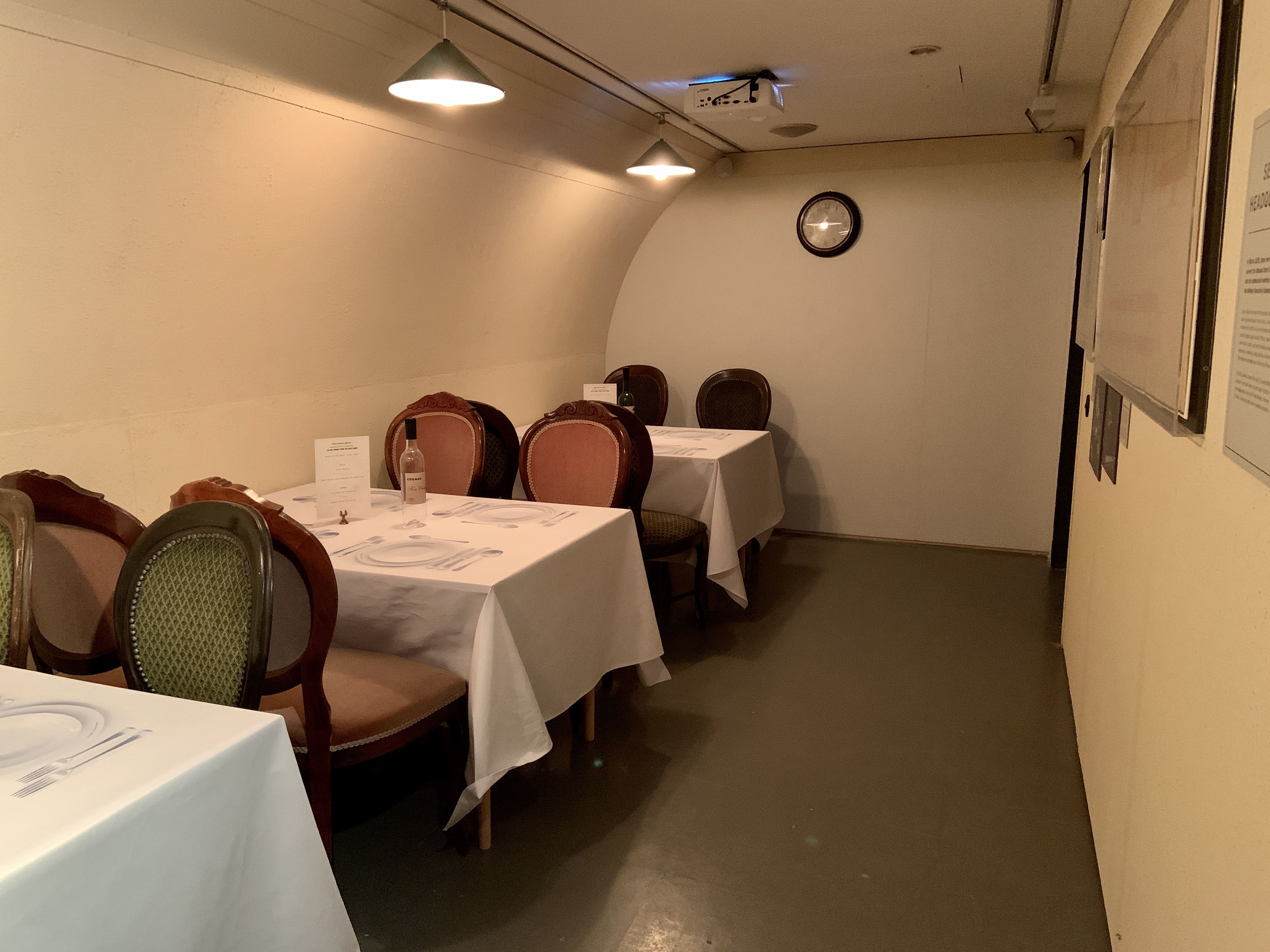 Another wartime use underground was for the Plessey aircraft factory. The Plessey factory in Ilford had been heavily bombed so 2.5-mile-long tunnels on the eastern section of the Central line became the workspace for 2,000 members of staff (mostly women) working on defence electronics.

Do see the dark corner where it looks like a train is whooshing past (you can even feel the rumble!) just as it is at Down Street station. And see the information about floodgates underground to protect the railway network from flooding during the WWII bombing.

More commonly, many underground stations were used as overnight shelters for citizens escaping air raids. At the height of the Blitz, over 100,000 people were sheltering each night at 83 stations across the network. 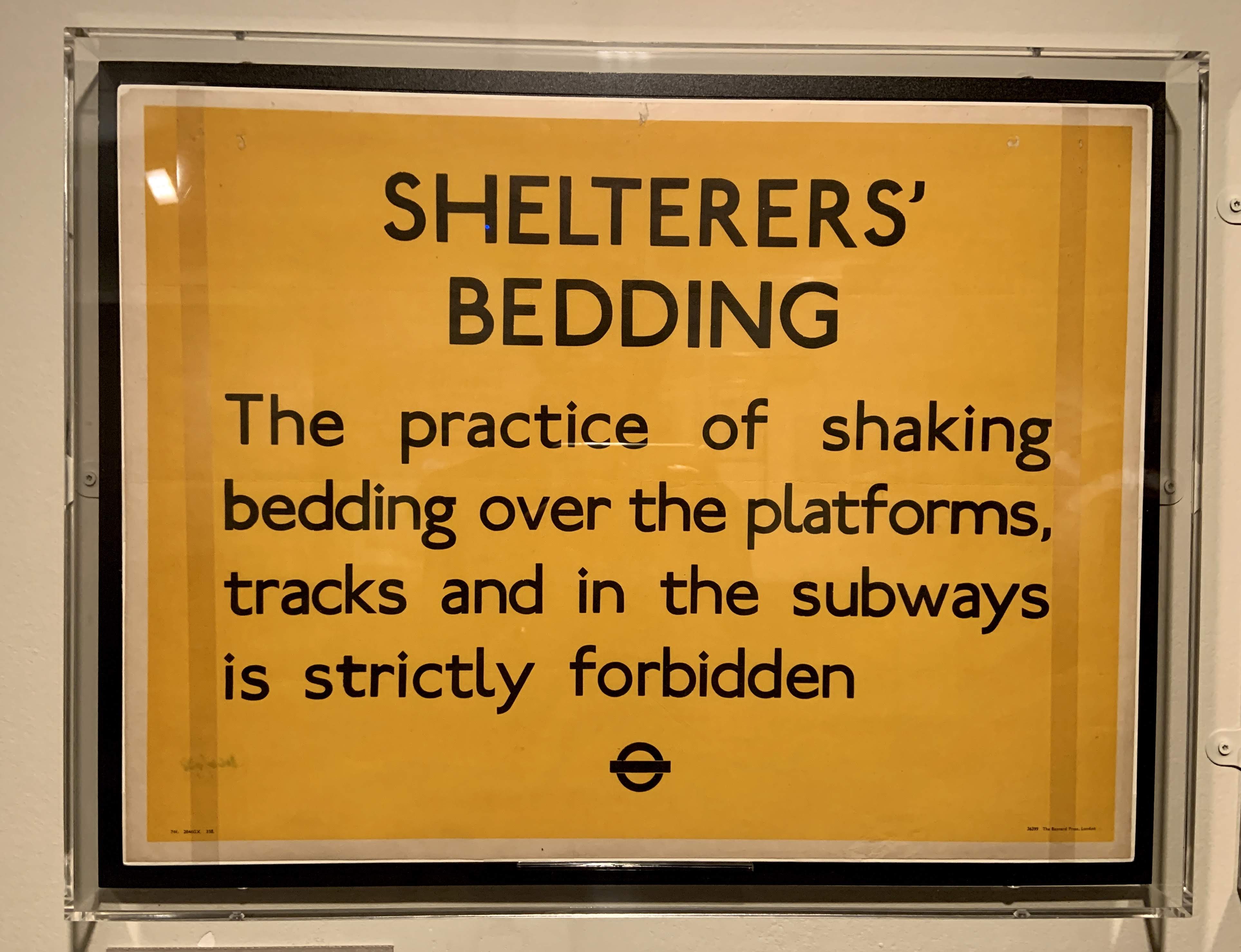 Conditions for sheltering in Underground stations were initially very basic: with toilet facilities often amounting to little more than buckets with cloth partitions for privacy. Better living conditions came with the construction of eight purpose-built deep level shelters, some of which opened in 1944.

You can see here some bunk beds for sleeping (although many slept on the floor and on the lines once the last train had gone through), plus original shelter tickets, advertising posters warning of the dangers of air raids, as well as a graph from 1941 showing how infectious diseases could spread. 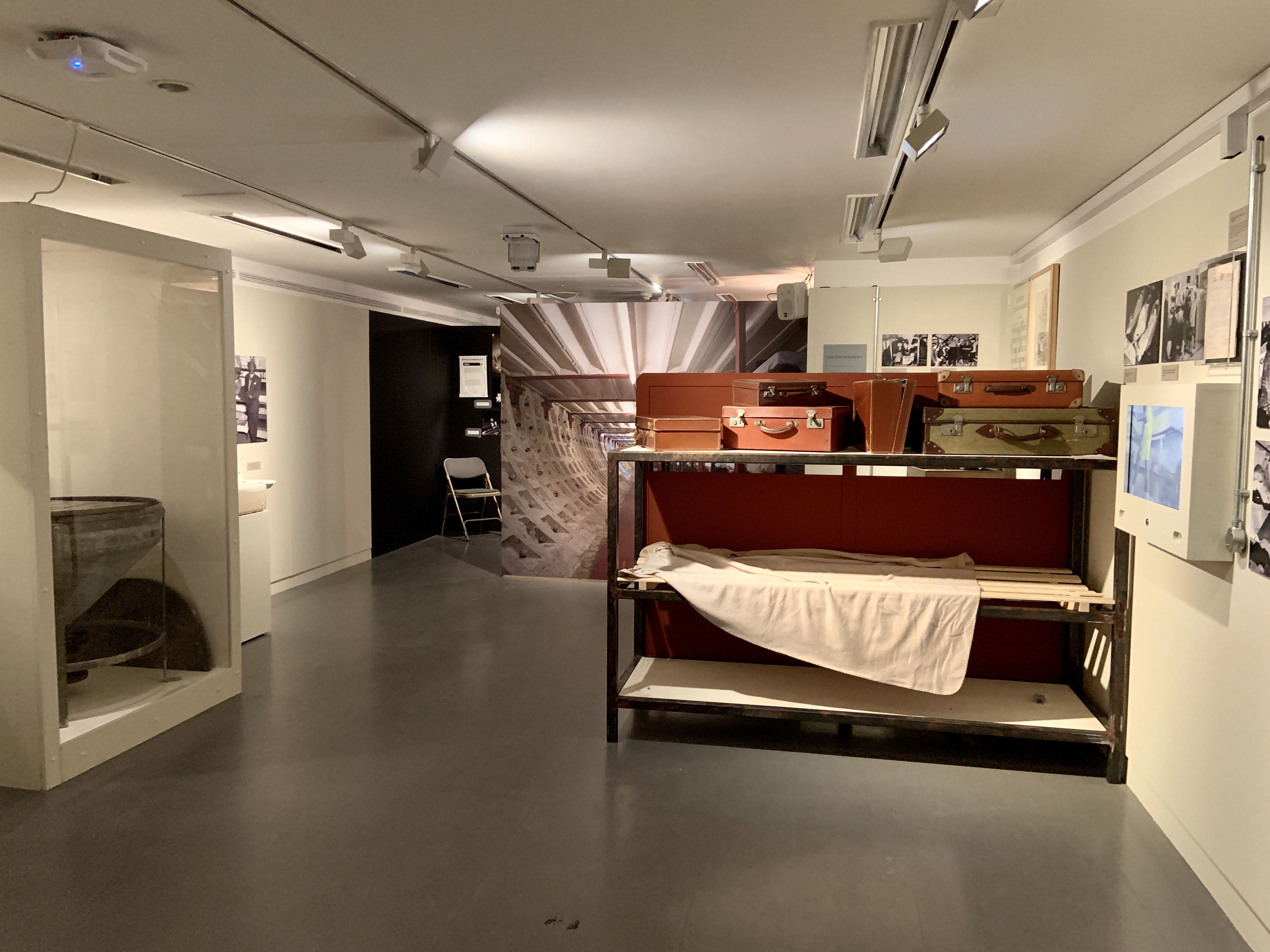 As well as the harsh realities of life underground, there is also some information about entertainment including singing and dancing plus board games and religious services.

The final section looks at some of the jobs on the Underground network.

I didn’t know that construction teams, like the ones working on the Bank station upgrade, will often position a figure of Saint Barbara – the patron saint of artillery and mining – at the site entrance, watching over and protecting the workers.

Large teams work behind the scenes to keep the network running, from engineers to rat catchers to ‘fluffers’ who clean the tracks and maintain the network that keeps London moving.

This is a really well-designed exhibition. I spoke to people who haven’t been on any of the Hidden London tours of stations and tunnels and they felt they now had a good idea what to expect. And now they were keener than ever to book a tour so we can be sure it’s going to be harder than ever to get the limited number tickets.

I’ve written about most for Anglotopia/Londontopia and all the tours have highlights making them worth seeing. The current list of tours available is Aldwych, Charing Cross, Clapham South, Down Street, Euston, 55 Broadway and Highgate. And I heard a rumour more locations may be joining the list soon. The best way to hear about the tours is to sign up for the London Transport Museum newsletter.