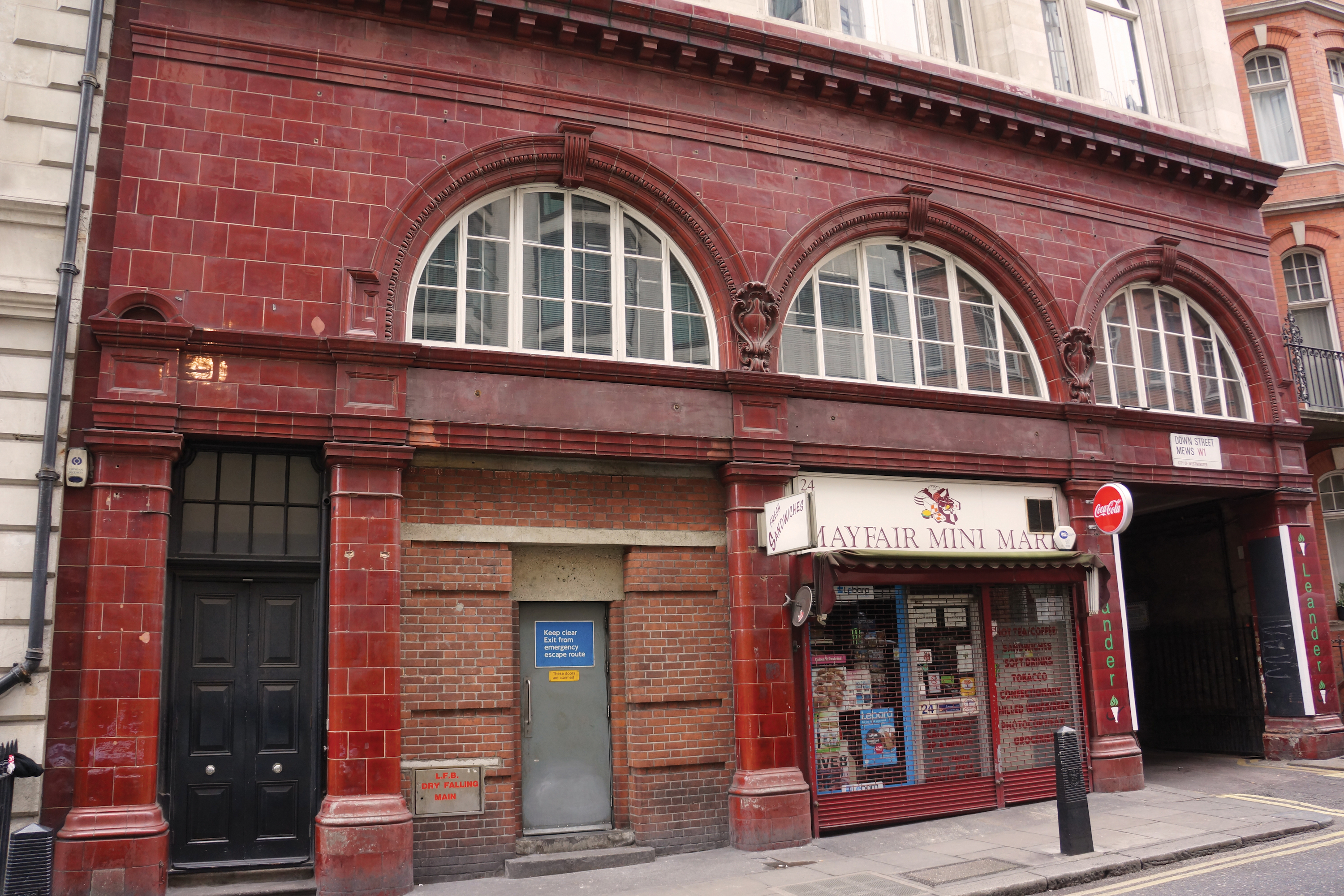 London’s abandoned Tube stations have a special aura about them. It’s hard to believe that in a city of eight million people, some tube stations were not used enough to justify staying open. But just because a stationed is abandoned, doesn’t mean it can’t serve a purpose. And when war is a certainty, every available underground space all of a sudden becomes important. Churchill’s Cabinet War Rooms are very much well known, and you can visit them to this day, but what many don’t know is that until they were ready for his use, he had another secret bunker – Down Street Tube Station. We had the chance to explore this dark and dangerous place on an organized tour last February. It was a once in a lifetime opportunity.

As with every Tube station, it was originally built with great optimism. The first lines of the London Underground were privately built and funded, so each station was meant to be a money-making proposition. With great fanfare, Down Street Tube Station opened up in 1907 by the Great Northern, Piccadilly and Brompton Railway.  It was latterly served by the Piccadilly line and was situated between Dover Street (now named Green Park) and Hyde Park Corner stations. It was designed by Leslie Green in the beautiful Arts & Crafts style of other Piccadilly Line stations. It was thought that a station located just off Pall Mall would be popular with the wealthy residents and guests at the world-class hotels located nearby.

What they didn’t figure was that wealthy people had no desire to ride the Tube. They had their own means to get around London. The station entrance was also poorly placed because the only place they could fit a station entrance was on Down St, a few hundred feet from Pall Mall itself. Dover St and Hyde Park Corner Stations were not too far away anyway, so people just used those instead. It was simply too inconveniently located to be useful to anyone. As a consequence, the station was little used and was closed in 1932.

Then the war came.

It started to look like war was a distinct possibility in 1938 and preparations began to shore up Britain’s infrastructure to ensure continued operations during any kind of attack. Britain’s Railways were it’s most important national asset so it was decided that the Railway Executive Committee (REC) would be formed to get the railways on a war footing. At this stage in Britain’s rail history, this was pre-nationalization, so all the different rail lines were privately owned and privately competing; they weren’t exactly keen to work together. So, it was up to the REC to coordinate amongst the various organizations to ensure continued operations.

The REC needed a secured telephone exchange to allow it to communicate quickly with the various railway companies. It needed bomb proofing and they need space for the Committee to meet and work 24 hours a day. The plan was to put this new exchange in the basement of their original Westminster headquarters, but this was deemed unsafe due to a flooding risk and the fact the building could not withstand a 500lb bomb blast. They thought about putting it somewhere in London’s suburbs, but they really needed to be as close to the government as possible. Someone had the bright idea that there was a perfectly good Tube station, unused and close to London’s poshest hotels and restaurants.

It did not take much to convince the patrician REC Committee Member that this was the ideal solution. A large sum of money was spent to convert the entire below ground station into their new wartime headquarters. The telephone exchange was installed. The elevator shaft and tunnels were reinforced, and living accommodations were installed. The place was to be manned 24 hours, seven days a week. Due to its sensitive nature, employees were required to live on site during their shifts so that the comings and goings wouldn’t be obvious to would-be spies. It didn’t even have its own postal address. Dispatches had to be sent via a crack team of motorcyclists always on call, some of whom were women.

The place served it’s purpose well, and Britain’s railways were able to continue operating during the war, some would say better than before the war! The entire place was a self-contained community with all the provisions they would need (outside of the ration system, I should add). There was a staff canteen which was known to have good food and there was kitchen staff on duty at all hours.

During the London Blitz, which lasted from September 1940 to March 1941, no part of London was safe from German bombs. That included Downing St, the official residence of the Prime Minister which was heavily damaged during the bombing raids. His bunker at the Cabinet War Rooms was not ready. The most important man in Britain needed somewhere to sleep. The brother of the REC Chair, Sir Ralph Wedgwood convinced Churchill that he would be the safest in the REC’s emergency headquarters at Down St.

Churchill spent a total of forty nights during the Blitz in Down Street, taking over the office of one of the committee members as sleeping quarters. The railway hotels serviced the facility, so the food and drink were up to Churchill’s standard, and it was said that he rather liked the accommodations, he always made the best of any situation as best he could. He liked the place so much that he arranged to have new personal quarters built for his future use. Alas, they went unused as once the Cabinet War Rooms were completed, he did not need to visit Down St again.

After the war, the REC no longer needed the facility, and it was returned to the London Underground which used it as an engineering access area for the Piccadilly Line. Most of the fittings and fixtures from the war were removed, but elements remain in place, an eerie reminder of Britain’s wartime past. The most amazing treasure down there are the remains of the telephone exchange, a beautiful piece of mechanical 20th-century engineering history. There are other bits and bobs from its human habitations, from bathtubs, boilers and the ruins of the kitchen. It’s very bizarre to think of all the people working down here, doing their bit for the war as bombs well down from above.

We went down in a tour group of ten people, from all over Britain – and even one fellow who flew in from the Netherlands – so it was an intimate tour. Our tour guide has done the tour almost 100 times, so he’s old hat. The station is not suitable for ‘tourist’ consumption. It’s dark, dirty and dangerous. If a Tube train passed, we had to turn out our flashlights, which made it even darker. It was dusty, loud and beautiful. The station is occasionally open for tours through Hidden London, part of the London Transport Museum. The tickets often sell out a year or so in advance, but you can keep an eye on their website to find out when tickets will be available again. If you have any interest in London’s transport and wartime history, I cannot recommend doing this tour more highly. 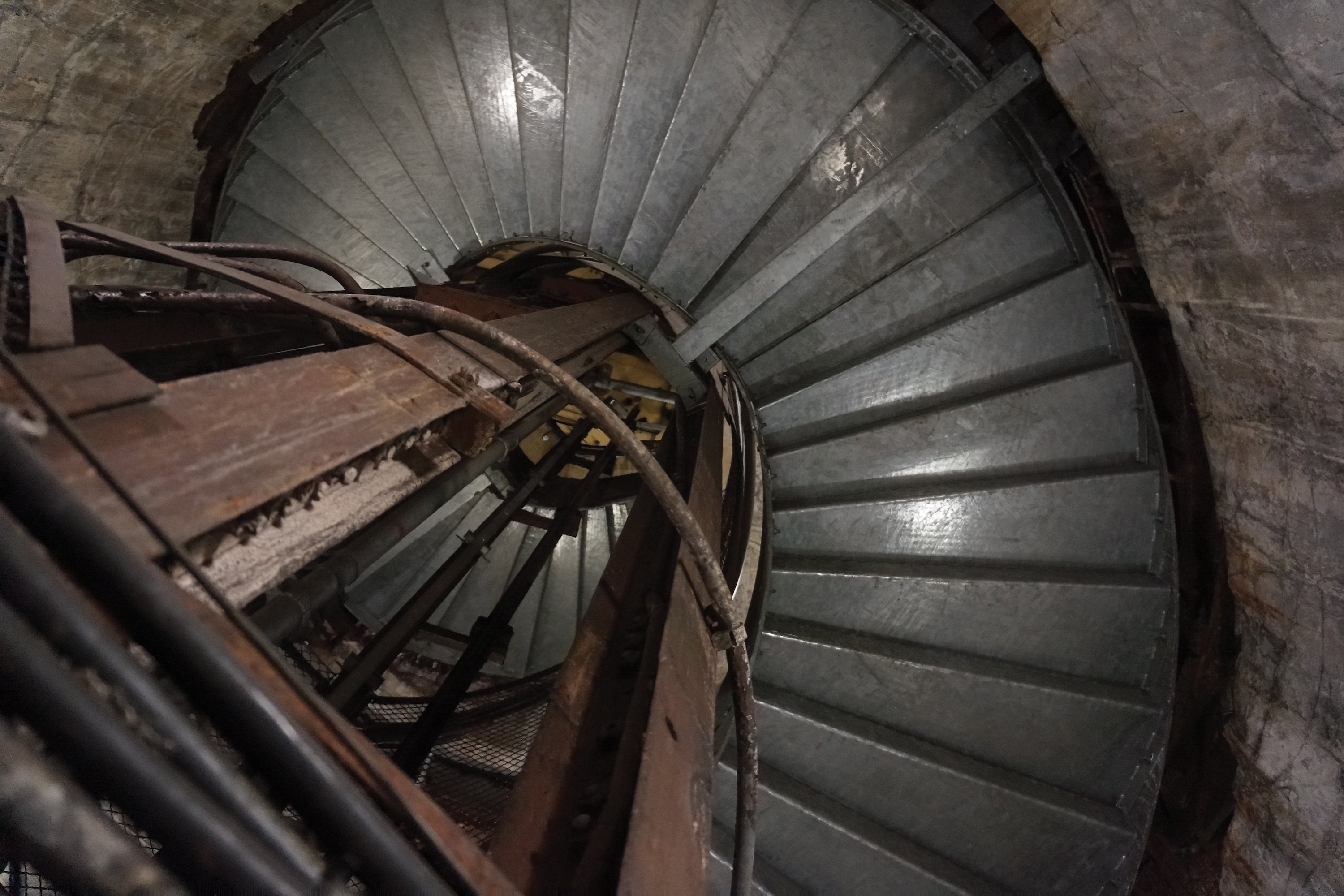 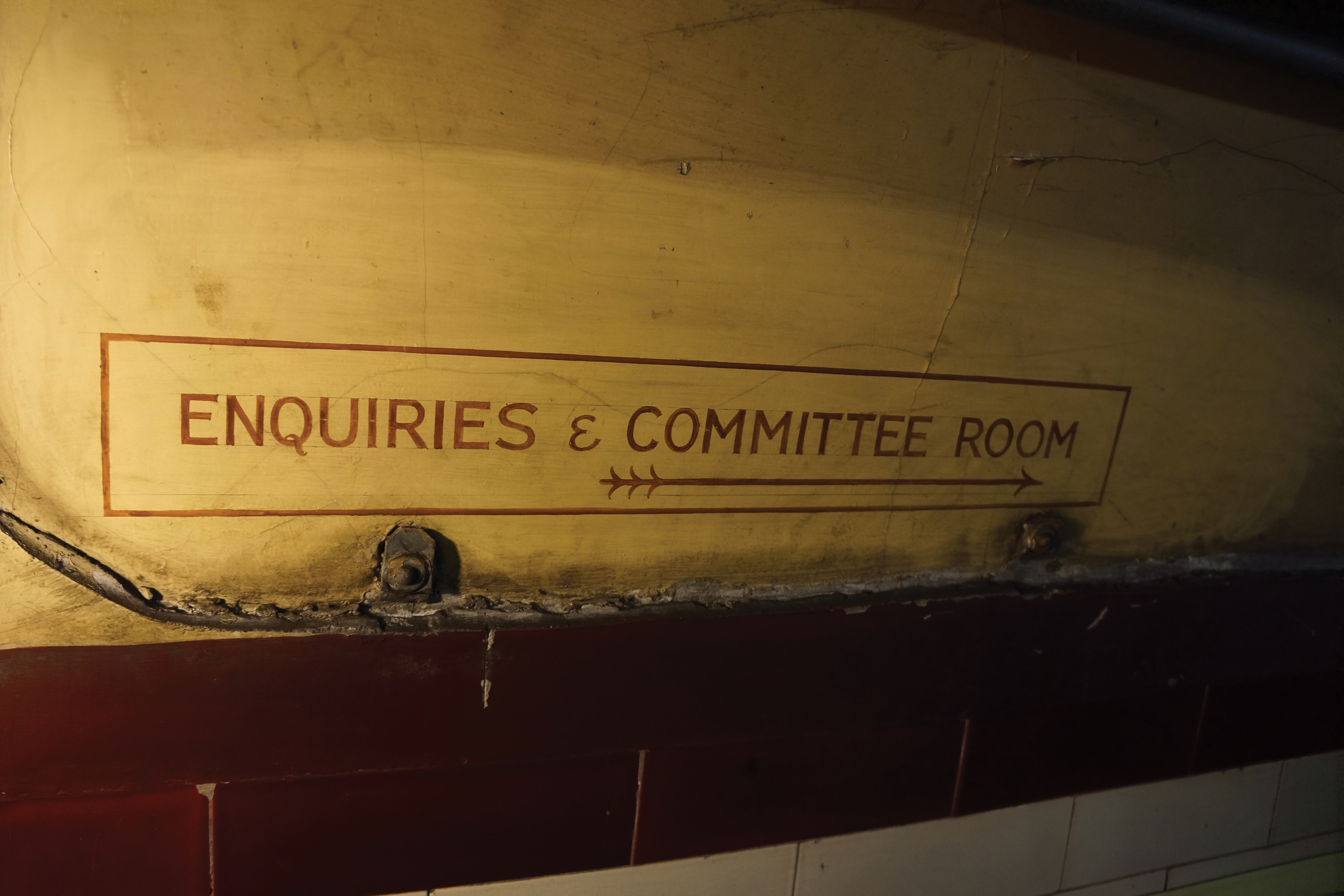 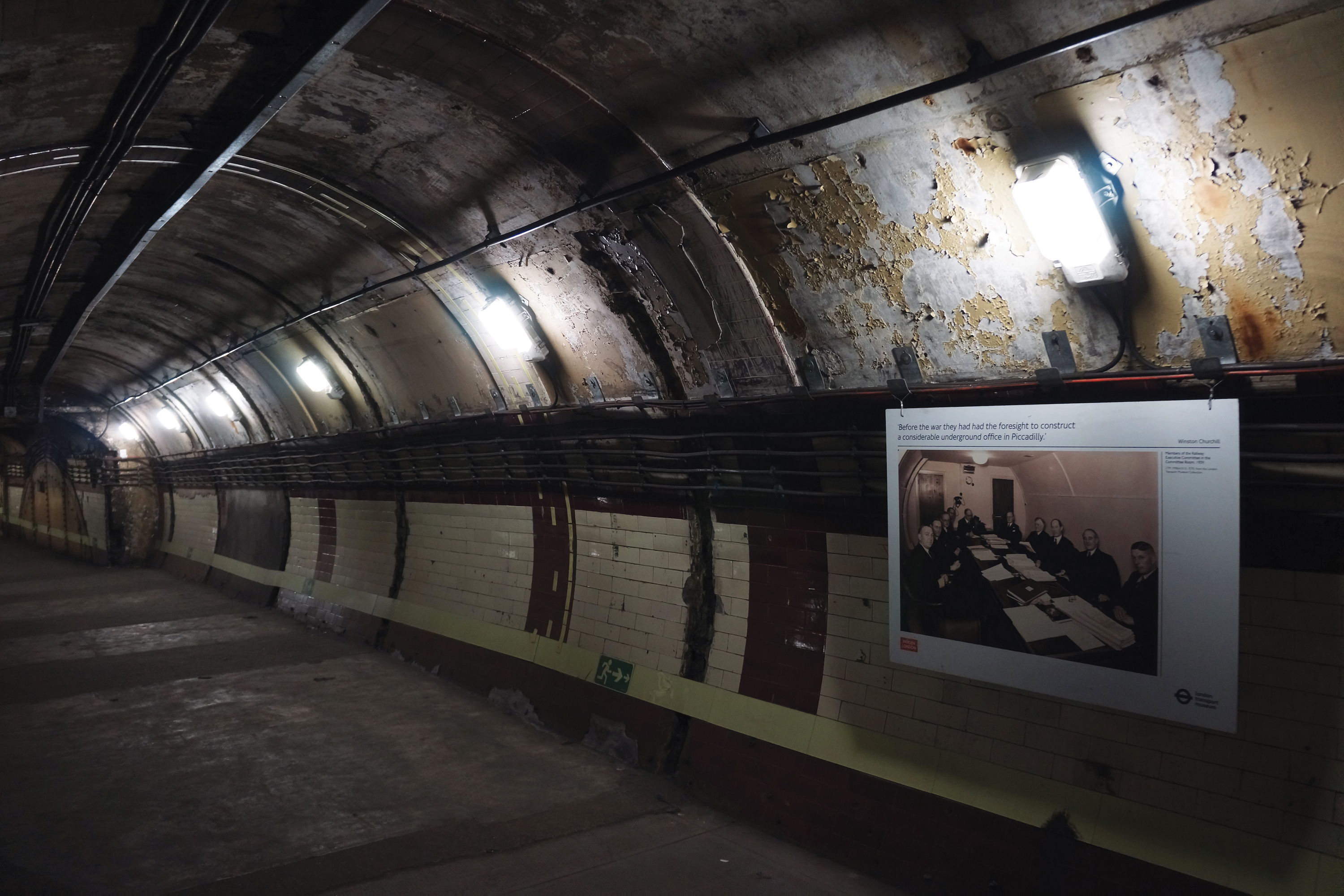 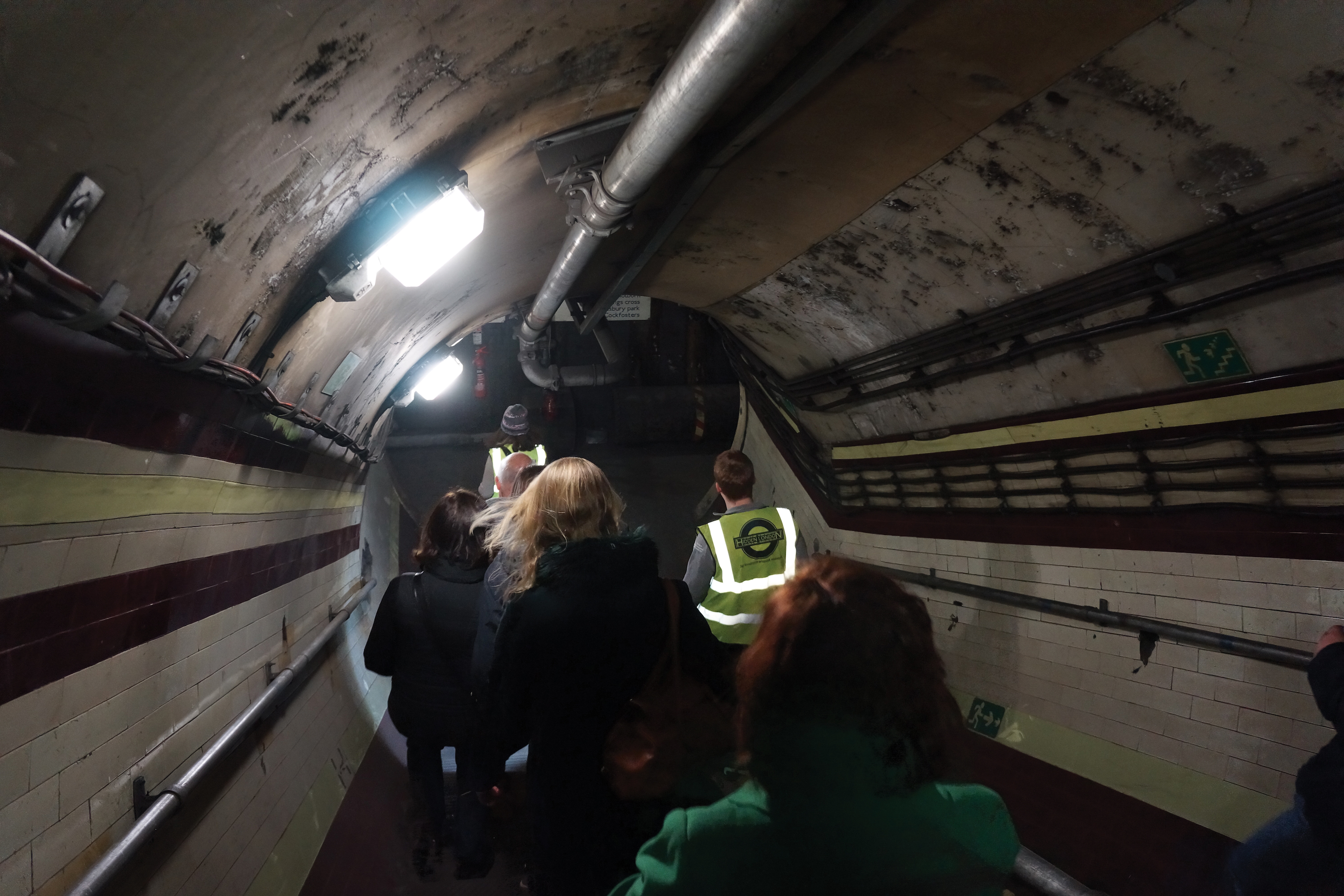 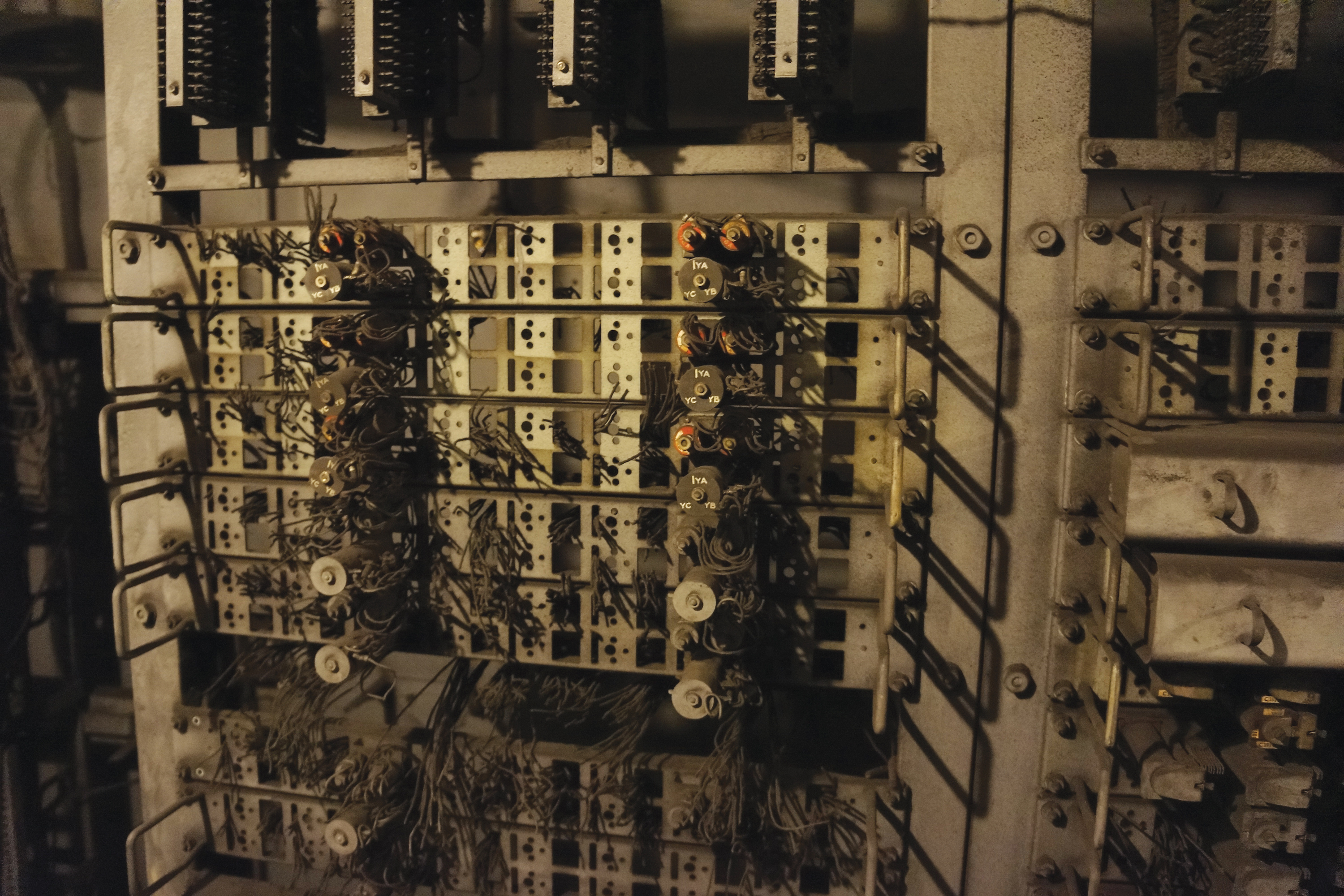 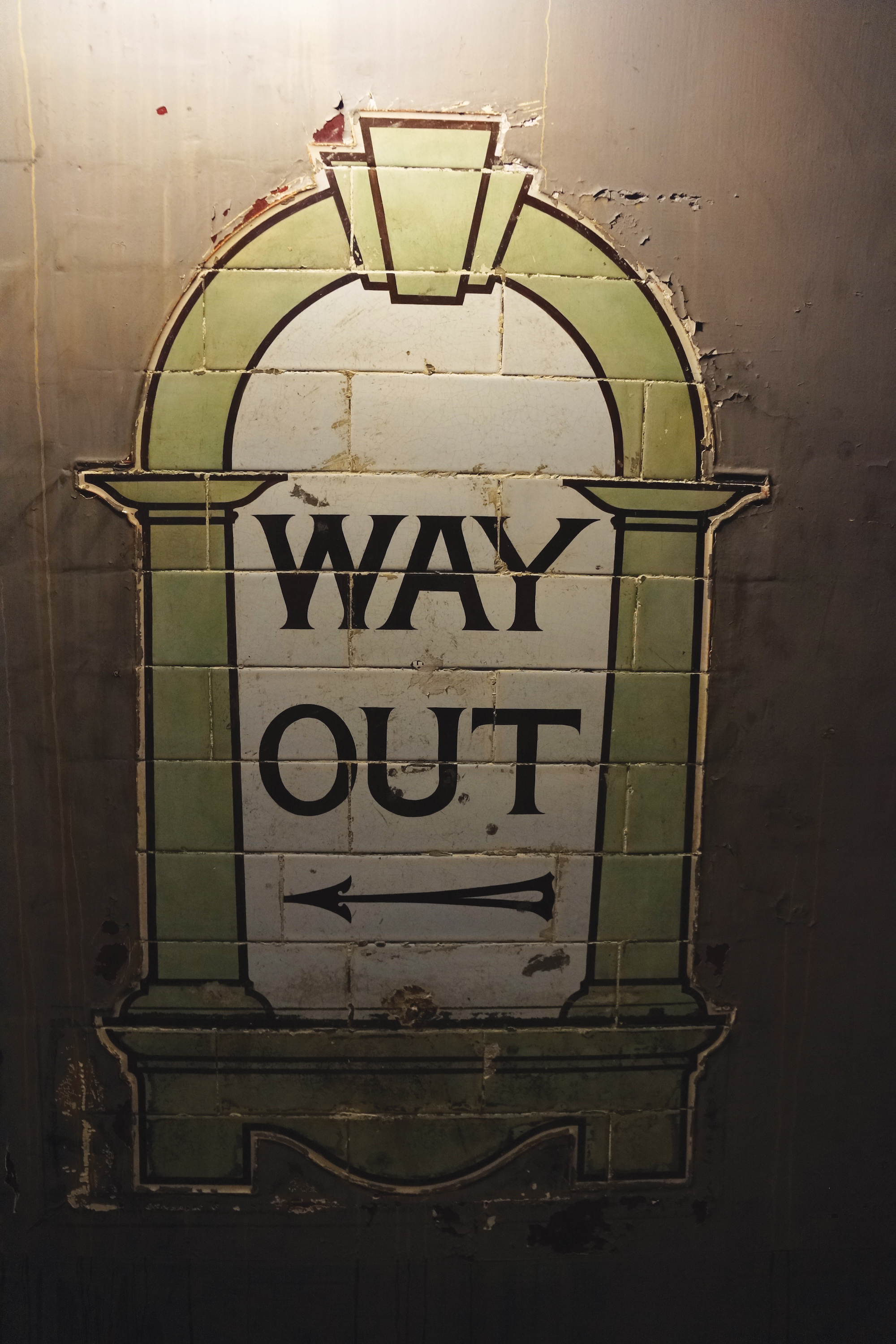 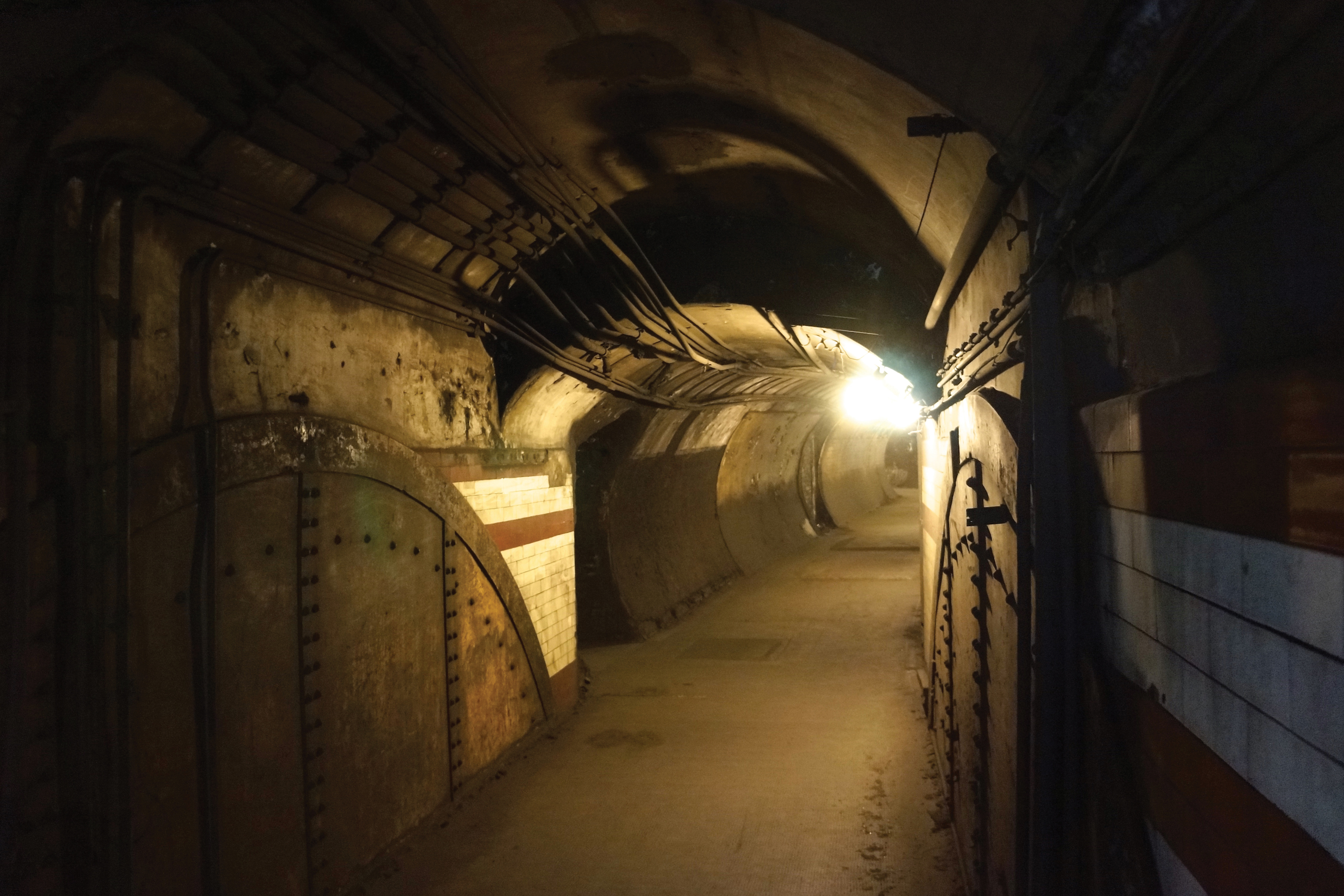 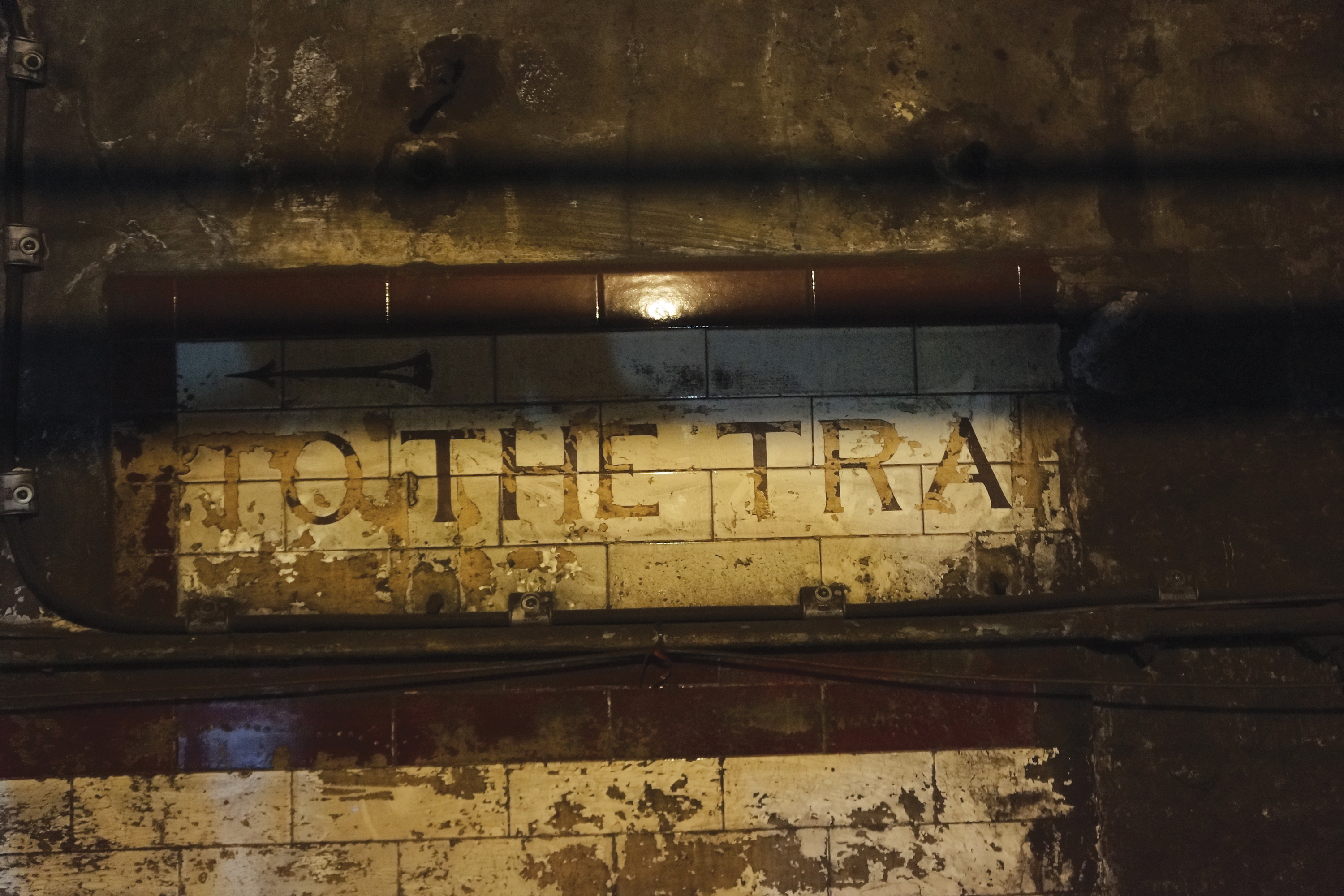 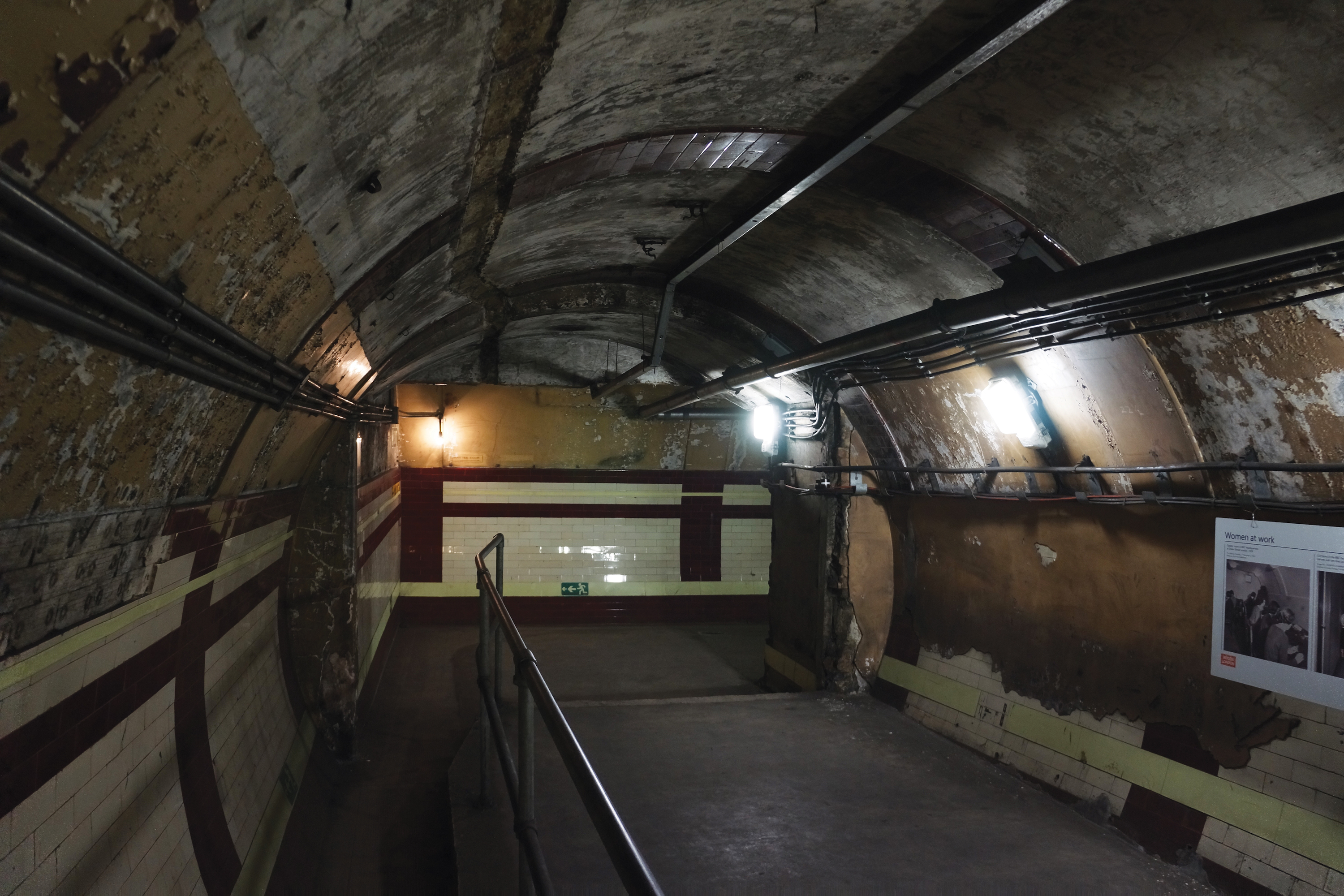 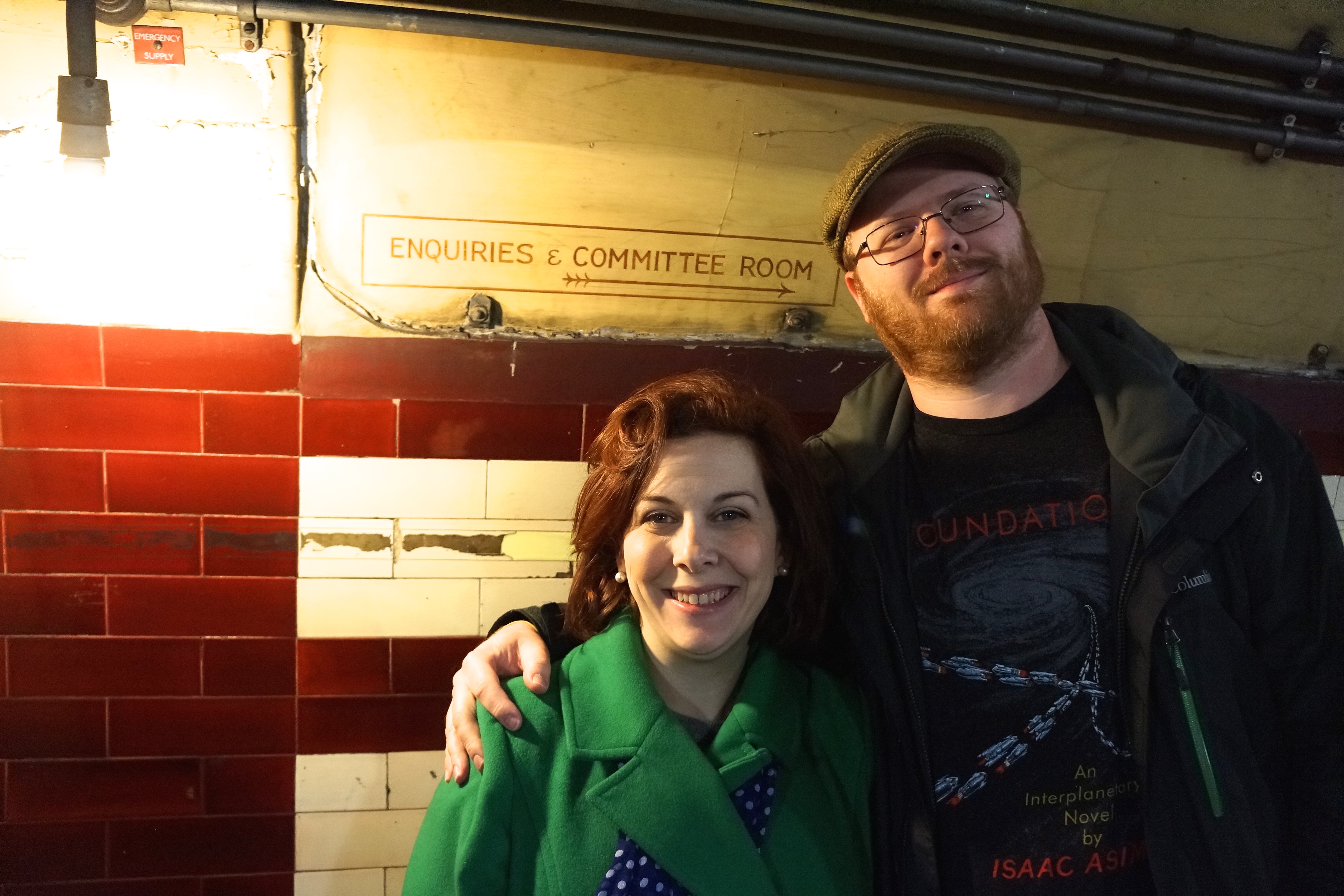