You are here: Home / The Tube / HIDDEN LONDON: The Lost Tunnels of Euston Station 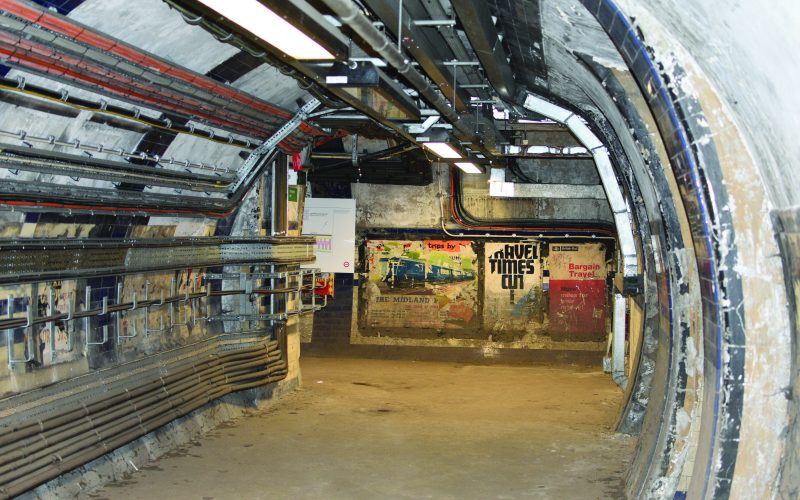 London Transport Museum’s ‘Hidden London’ tours are great to know about as you get access to tunnels and stations on the London transport network that are not usually open to the public.

In Londontopia magazine issue #1 I reported back about the hidden tunnels at Charing Cross station. So it was a treat to join another tour, this time at Euston station. This one was a treat because soon the old Euston Tube station and tunnels will be swept away to make room for High Speed 2, Britain’s new £50 billion high-speed railway.

High Speed 2 (HS2) is the second national high-speed rail line, this time directly linking London, Birmingham, the East Midlands, Leeds and Manchester. Work is underway on Phase 1 (London to West Midlands), and the project is due to open in phases between 2026 and 2033.

The sixth busiest railway station in the UK, Euston was opened in 1837 and currently serves more than 40 million passengers a year – twice compared with its design capacity. Euston station needs a major redevelopment to be a modern transport hub for providing high-speed rail services, and the work has started. The £2.25bn ($3.47bn) transformation is being built in stages to allow continued operation of the existing facilities.

While other ‘Hidden London’ tours can be available for many years, all of this work on Euston station means this tour has had to change. 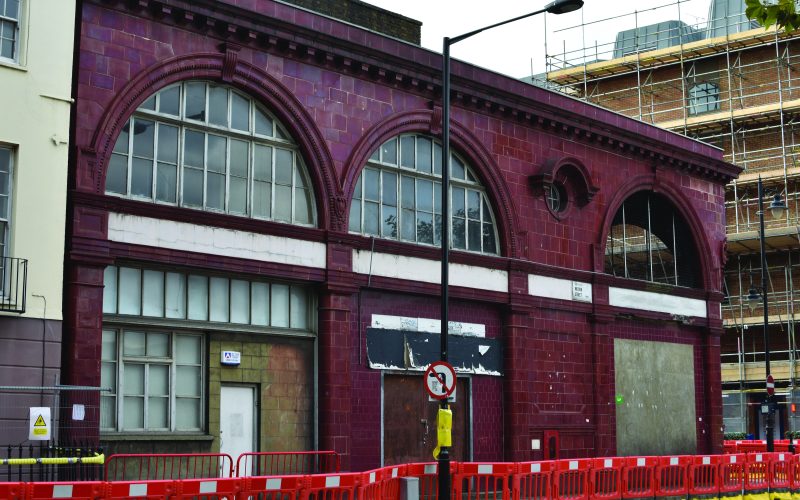 Due to the local building work, the meeting point for the tour can vary. I had hoped to go inside one of the original tube station entrances but, sadly, it was already closed with access no longer permitted to the London Transport Museum team.

It can still be seen on the corner of Melton Street and Drummond Street, on the western side of Euston mainline station. Even though this entrance has been closed for over 50 years, it is still recognisable as an Underground station due to its distinctive ox-blood red-tiled façade. It is clearly a Leslie Green designed station as his legacy can be found across London at Oxford Circus, Russell Square, Camden Town and many more tube stations.

This was the station for the Charing Cross, Euston and Hampstead Railway (CCE&HR), better known as the Hampstead Tube. It was one of two original Underground lines serving Euston mainline railway station. Opened in 1907, this line ran from Charing Cross to the north of London (Golders Green and Highgate) through Euston station. (The second of the lines was the City and South London Railway (C&SLR) which ran from the City of London through to Stockwell in south London and extended from the City to Euston in 1907. This was London’s first deep-level tube line.)

It is worth remembering that these were independent private companies and were two of the nine train companies operating in London back then.

The mainline station at the time served the London & North West Railway (L&NWR), and they also owned much the land around the station. It was agreed that both lines would serve Euston station but on the condition that they each had their own surface access and ticket offices. The C&SLR surface building (demolished in 1934) was built on the corner of Seymour Street (renamed Eversholt Street) and Drummond Street. 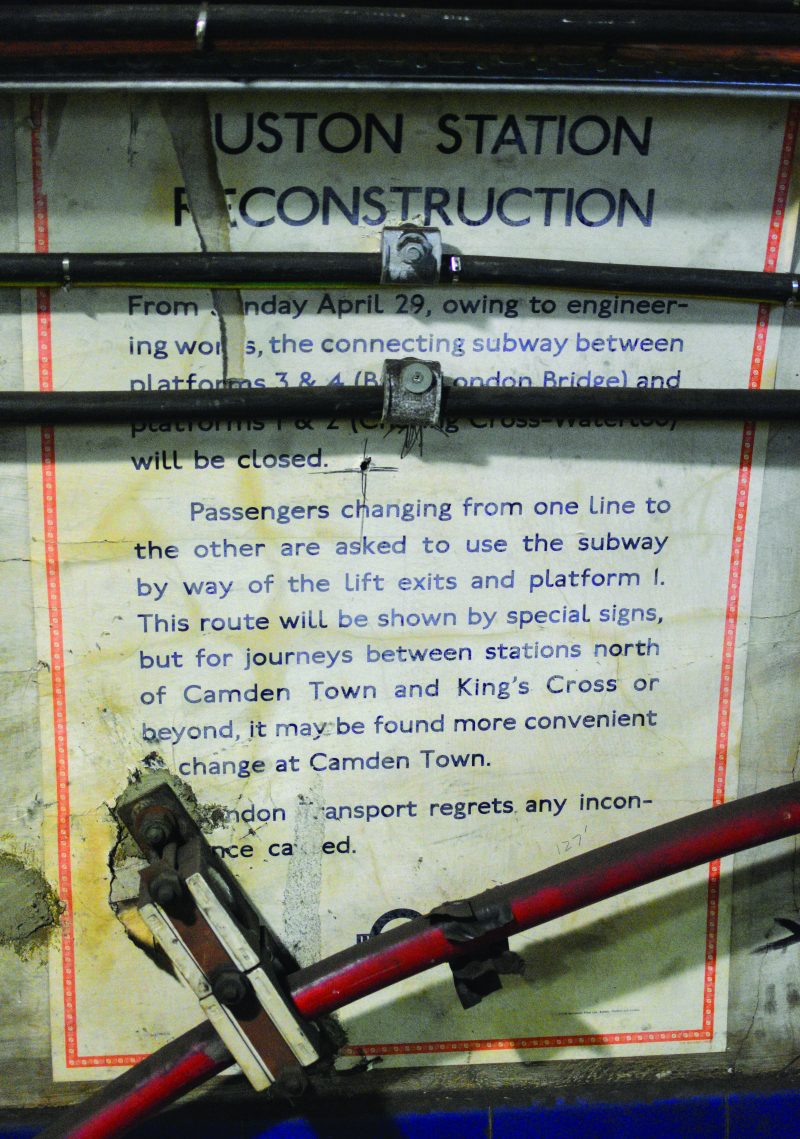 Due to their close proximity, the two rivals agreed to build subterranean interconnection tunnels at track level, and this was to include a ticket office between the two lines – a unique feature for a London Underground station. This interconnection tunnel proved to be very popular with travellers of the “penny tube”.

The two rivals eventually merged in 1914 forming what would eventually be known as the Bank branch and Charing Cross branch of the Northern line. The two separate station buildings were closed on 30 September 1914 after the two railways were taken under the ownership of the Underground Electric Railways of London along with the interconnecting passageway providing access to Euston Station.

Inside the CCE&HR building, there are no longer any booking hall windows or lift machinery as the station is now mainly used for air ventilation ducting. There’s also a suction pump to maintain air circulation at platform level.

This station is required for HS2 construction access so its ventilation equipment will be relocated and the surface building will be demolished. 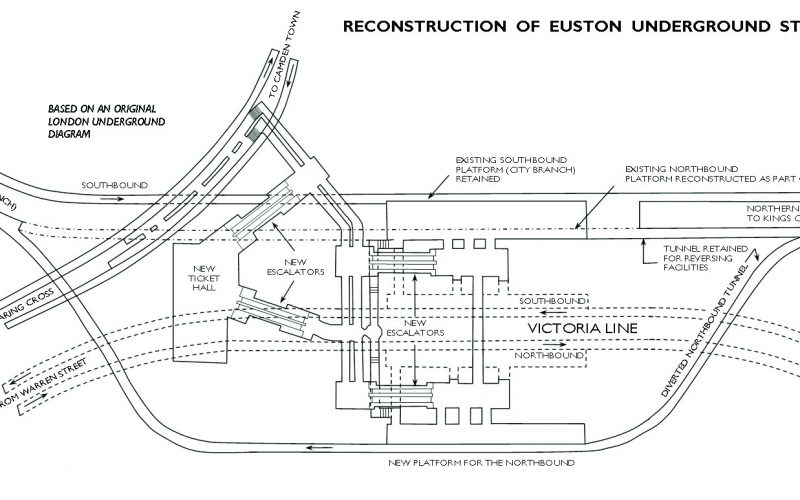 Euston mainline station was rebuilt in the 1960s and, during the construction of the new Victoria line running through Euston (open from 1968), the opportunity was taken to rationalise the various underground passageways and ticket halls for the underground lines. The interconnection tunnel was closed to public use on 29 April 1962, and with the introduction of escalator operation, all of the other lift shafts were closed on 8 March 1965 along with the tunnels that led to the lift concourse.

This tour is in two parts as we started with a presentation in a nearby office building and then we went across the road to Euston station and through a door at the western end of the eastbound Northern line platform and into the ‘hidden’ part of the tour. This took us to the subterranean interchange tunnel between the two old lines and the lift shaft tunnel on the C&SLR side.

Through this doorway, there were a series of steps leading upwards. You don’t need any special clothing to go on this tour, although sturdy footwear is a requirement and we were all provided with a hi-vis vest. But the tunnel walls are very dirty, so we were strongly advised to touch nothing.

Shortly into the southern interchange tunnel, an original notice of impending closure was still in place on the wall, and still perfectly readable even though cables were later installed over it. The notice made it clear that changing underground was still possible (for a short while anyway) and that passengers should use the nearby tunnel that passed through the lift concourse instead. 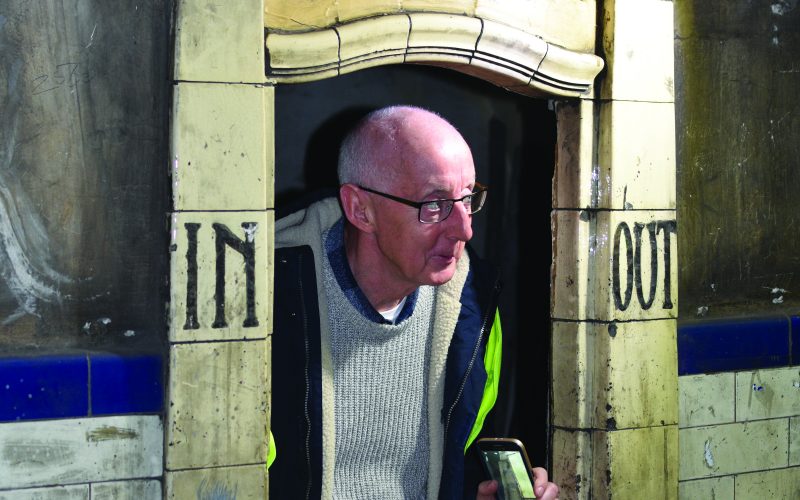 I mentioned that the two lines had to provide a ticket office underground and we got to see the small ticket booth. This was for passengers wanting to get access between the CCE&HR and C&SLR lines without having to head up to ground level to do so. This is believed to have been the only such ticket office in existence on the London transport network and would have shut many years before these tunnels were finally closed to the public.

We got to go inside the Booking Office and could see through the small windows on each side that the staff used to check when passengers were approaching.

From the time of opening, the joint ticket office was preferred by passengers, and the two station buildings at street level were lightly used by comparison. Each station had its own tile ‘identity’, and here Euston was a blue line with two parallel black lines below so passengers could visually confirm where they were without having to go to street level.

The IN and OUT signage on the side of the booking window denoted the direction in which people should queue. There may also have been a small barrier in line and just behind the window to enhance this request. No record is left on how the competing lines shared the money from here.

Apart from the installation of cables, these tunnels have not been used since the closure, and there was no reason to remove the advertising posters. While many have been ripped over the years, the lack of sunlight means that the colours on the pieces left are still impressively vibrant.

Advertisements from the sixties adorn the walls promoting cinematic releases such as Psycho, West End productions such as West Side Story, religious groups, hair products and a P&O cruise that took travellers from the UK to Australia. There’s a British Rail “Bargain Travel” poster in another tunnel section that closed in 1967. We know this closed later as the BR two-way arrow logo was only used from 1965. 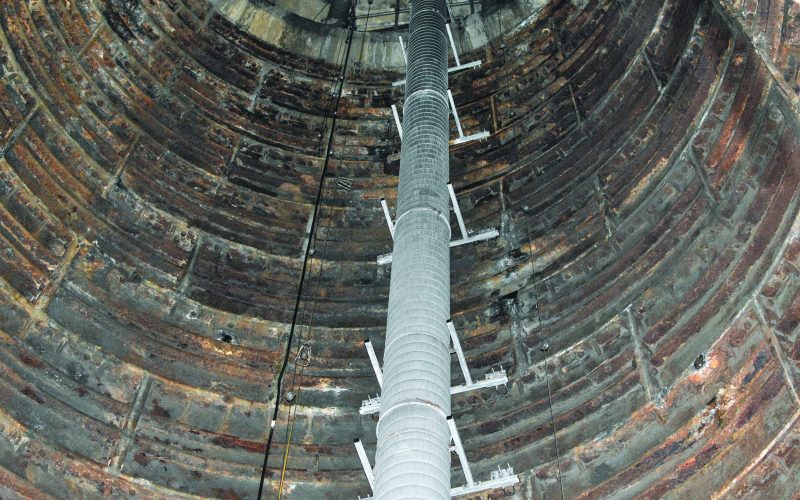 After the two lines were brought together, lifts were added inside Euston mainline station to reach the underground lines. While there is no sign of these lifts in the mainline station anymore, we got to see where these lifts arrived below. The lift shafts have been capped at the surface, but the shafts are still there, and we could look directly up inside one of them to five storeys above. 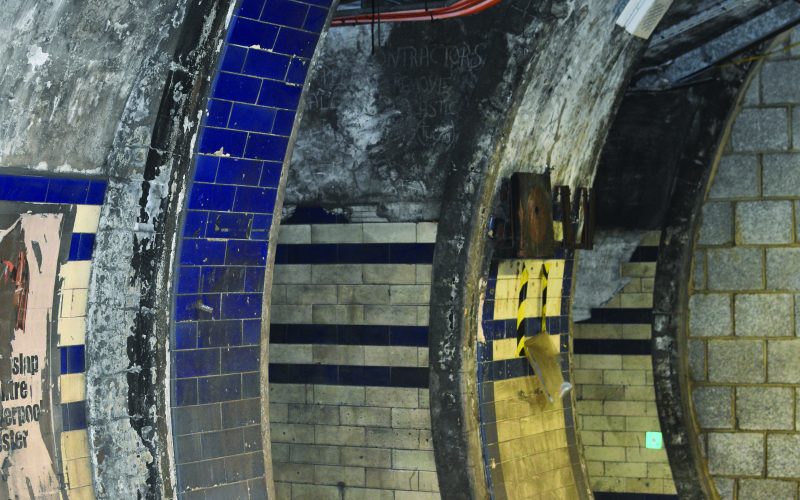 These tunnels were constructed in the same way as the tube tunnels so we could see the eight sections of each tunnel shield, each section stamped with the date of manufacture.

At the top of a short incline, we came to a chamber with grilles in the floor, fenced off by girders to prevent engineers from stepping on or through them. Completely oblivious to us above, we could see passengers on the platform of the Victoria line. Trains entering and leaving the station help with ventilation by causing a large amount of air movement as they pass through. And I can confirm as a train went past, cold air was blasted up into the tunnel.

Otherwise, it was surprisingly hot inside the tunnels – and loud at times as the Northern line Charing Cross branch trains were sometimes close overhead. 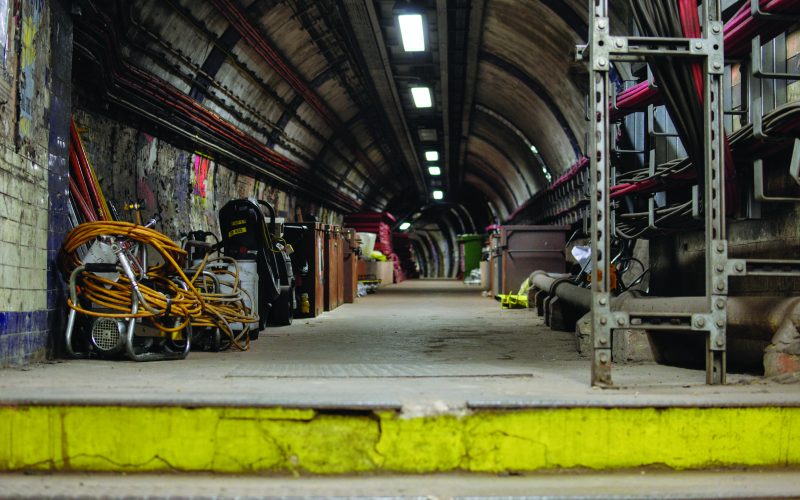 Back onto the Bank branch Northern line platform, it was easy to see how unusually wide the eastbound platform is today. Many of the C&SLR platforms were constructed with a central island platform. This meant passengers for either train direction were waiting on the same platform which must have been dangerously crowded during rush hour. This arrangement was done away within the 1960s at Euston and has been eliminated in many stations. However there are a few that still retain this layout such as Clapham North and Clapham Common.

The ‘Hidden London’ occasional tours have been running since 2015, and you can find out more about all of the tours, and book tickets, on the London Transport Museum website: www.ltmuseum.co.uk

There are 20 places available on each tour, and you need to wear sturdy walking shoes. The tour lasts around 75 minutes, and the time goes very quickly.

Every few months, new tours and dates are announced to the London Transport Museum Friends mailing list, we would advise you to join this list as the tours can fill up quite quickly with the most popular tours selling out in 24 hours.

We recommend touring the Euston Tunnels as soon as possible because very soon, it will not be possible anymore once HS2 construction starts in earnest.