You are here: Home / Culture / Museums / Top 10 London: Ten Things to See at the Victoria and Albert Museum (When it Reopens…) 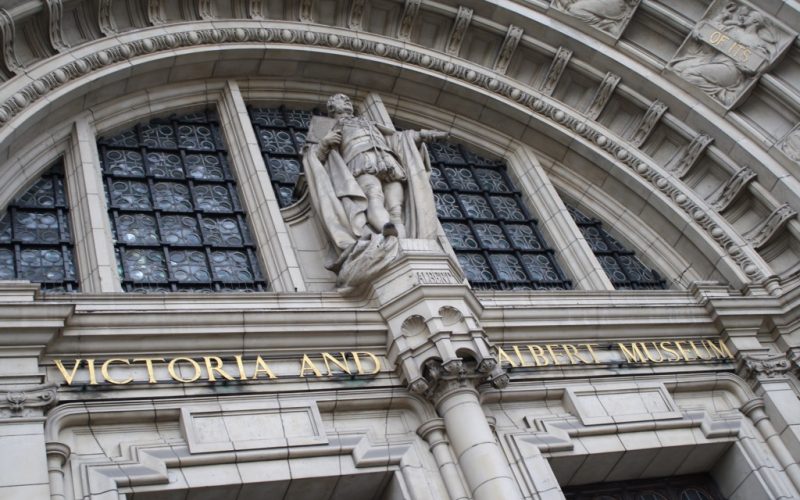 More than an art museum, the Victoria & Albert Museum is dedicated to applied and decorative arts and design.  This goes beyond painting and sculpture to photography, fashion, logos, furniture, textiles, and more.  This means the museum’s collection is quite expansive, clocking in at over 2.27 million objects.  With so many things to see in the V&A, it can be hard to pinpoint which items to see first.  Fortunately, if you find yourself with this problem, we’ve outlined ten of the top items to visit when you go to the Victoria & Albert Museum.

Cast Courts & the Cast of David

The Cast Courts may make you think they’re full of the greatest statues in the world, but the truth is that they’re all recasts.  Walking into the courts is like visiting the history of art’s greatest masterpieces.  The most notable of these replicas is the reproduction of Michelangelo’s David, which was allegedly so accurate that Queen Victoria had a maple leaf made to cover

Of course, just because the pieces in the Cast Courts are replicas doesn’t mean all the statues and busts in the museum are.  Antonio Canova’s “The Three Graces” is one such prime example.  It’s based on Zeus’s three daughters and was carved in the 19th Century replicating classical imagery and techniques.  It is truly one of the most breathtaking works of art at the V&A.

The V&A’s Jewelry Gallery includes over 3,000 jewels “from ancient times to the present day”.  The gallery is kept in low light deliberately to allow the gems in various sets to let them shine.  As the museum’s website points out, these pieces include a Celtic breastplate, diamond tiaras, modern designs, and jewelry worn by royalty such as Queen Elizabeth I and Catherine the Great.

This unique piece of Indian furniture is actually a working barrel organ.  Carved to resemble a tiger than has pounced on a soldier in 1795, Tipu’s Tiger was created for Tipu Sultan, also known as the Tiger of Mysore, the Indian kingdom he ruled.  Aside from its details and macabre subject, it’s one of the best examples of early musical automata to come out of India.

If you’re like me, the very title makes you think of a different cartoon Raphael, but this exhibit actually relates to his namesake.  The Raphael Cartoons are seven large illustrated tapestries created by the famous Renaissance artist from 1515 to 1516.  Each depicts a moment from the Bible, and they once hung in the Sistine Chapel.

The Cromwell Road entrance of the V&A has one of the most unique and beautiful glass blown chandeliers hanging from the ceiling.  Dale Chihuly’s great glass work was inspired by the Murano glassworks in Venice and is very extravagant, with green and blue glass tendrils reaching in all directions.  It has been hanging at the museum since 2001.

Living up to its mission of honor art and design, the Fashion Gallery presents the top designs from the early 1700s up to the present.  This includes fancy ball gowns, tuxedos, and even a pair of shoes that date back to the Ancient Egyptians.  The gallery shows how our styles have changed over the centuries to feature the formal and the practical while interjecting artistry in our attire.

One item you’ll definitely want to make sure you see is the very first photograph of London.  Monsieur de St. Croix took the photograph depicting Parliament Street from Trafalgar Square in 1839 before Nelson’s Column was constructed.  The photo was taken as part of de St. Croix’s public demonstration of the daguerreotype (the earliest photography technique) for Londoners.

Four-poster beds can certainly be works of art, and the Great Bed of Ware is one of the top examples of how furniture can be its own art form.  Jonas Fosbrooke built the bed around 1590, covering it with ornate carvings and making it so large it can reportedly fit four couples.  It was so well-known that it had a mention in William Shakespeare’s Twelfth Night.

Perhaps one of the most infamous photos of the 20th Century, Lewis Morley’s photo of the woman at the center of the Profumo Affair.  The stark black-and-white photo of a naked Keeler in a chair makes it easier to understand how several politicians created one of the biggest sex scandals and political incidents of the Cold War.