You are here: Home / Culture / A Tale of Two Cities – The City of London and Greater London – Why There Are Two Londons 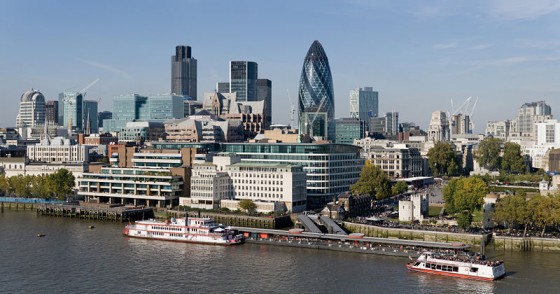 Most people would think of London as one great big city, but there are really two cities within London: the City of London and Greater London. The City of London in many ways is the “original” London. When the Romans came in 43 A.D., they created the settlement of Londinium and built walls for protection. The London Wall essentially formed the edges of the city. In fact, the City of London itself does not extend much beyond the Wall and certainly not below the Thames.

Following his domination of London, William the Conqueror built what is perhaps London’s first landmark, The Tower of London. At the time, its multiple-stories were designed to remind Londoners who was in charge. Perhaps the most influential moment of in the City of London’s history was the Great Fire of 1666, which raged for days and destroyed about 60% of the city, including Old St. Paul’s Cathedral. As the city was rebuilt, Sir Christopher Wren rebuilt St. Paul’s and many other churches within the city.

As the population of London grew, the original City of London couldn’t hold everyone and began to expand outward. Many cities existed outside of London began to be absorbed into the growing metropolis while maintaining their own administration. The cities finding themselves part of the new London included the City of Westminster, Shoreditch, Greenwich, Bethnal Green, Islington, Fulham, Chelsea, Hammersmith, Paddington, Kensington, and more. By 1889, the administrative district of the County of London was formed and only eleven years, later, the county was divided into the City of London and 28 metropolitan boroughs.

Despite being only one square mile, the City of London is governed by the Court of Aldermen (consisting of 25 Aldermen elected for a period of six years) and the Court of Common Council (consisting of 100 Common Councilmen elected among the city’s wards). Meanwhile, the Greater London Authority has the Greater London Council with 25 elected assembly members. While the Mayor, Boris Johnson, belongs to the Conservative Party, the Labour Party controls the Assembly with 12 members. The rest of the Assembly includes 9 Conservatives, 2 members of the Liberal-Democrats, and 2 members of the Green Party.

City services are also divided, with the GLA solely responsible for passenger transport and fire response. The GLA and the CLC both handle housing, strategic planning, transport planning, and highways. The City of London and other boroughs’ councils are responsible for all other city services. The GLA coordinates land use planning throughout Greater London and it’s the responsibility of the Mayor of London to produce the strategic plan, dubbed “The London Plan” to which the boroughs (including the City of London) must comply. Additionally, the London Sustainable Development Commission exists to craft the city’s energy policy and reduce emissions.

In the end, London is more than just one city. The story of London is one of two cities of the same name—and many other cities as well. As the city grew, its administration changed to handle the massive metropolis it formed. Now what we think of London includes both the City of London and Greater London.