Who doesn’t love a boat trip on The Thames? Combine that thrill with the fun of Horrible Histories ‘on location,’ and you’re ready for the new Terrible Thames River Tour. 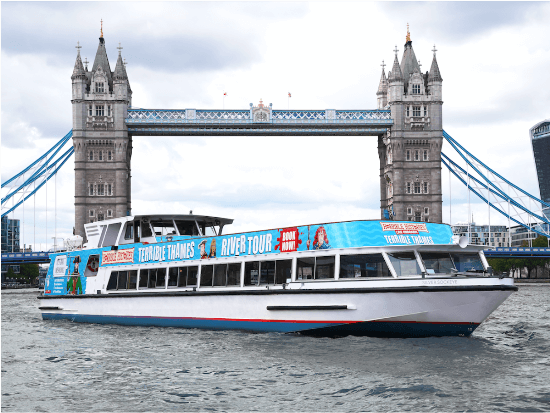 Horrible Histories is a multi-award-winning comedy sketch series from Children’s BBC with some great songs as well (this one may well remind you of an Elvis tune!). Fact-filled and uniquely funny, the books are the world’s bestselling children’s history book series, and there are theatre shows too. They keep the historical facts accurate and appeal to children by including lots of jokes. I’ll happily watch the TV shows without a child in the room, and I’ve been to see a few of the live productions (with kids). Using names like the ‘Vile Victorians,’ ‘Cut-Throat Celts,’ ‘Gorgeous Georgians’ and Groovy Greeks,’ you soon get the idea that they know how to appeal to families. 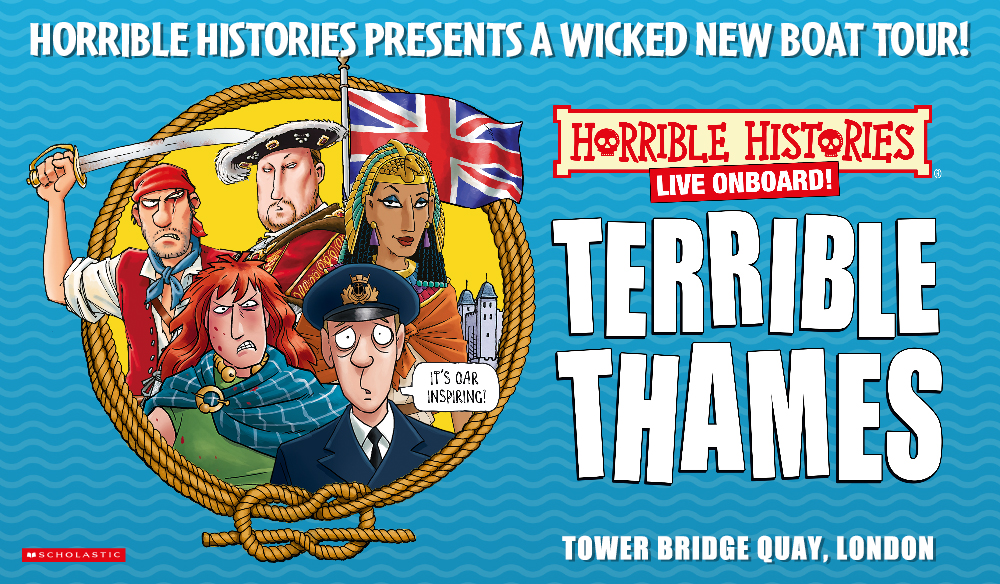 When I explain about the different types of boat tours on the Thames, I always point out that the Woods’ Silver Fleet is the best.

The Woods family have been Thames Watermen since 1866. Lillian and Alfred Woods started their sightseeing tours in the early 20th century from the Tower of London. Lillian encouraged her son Alan’s inspired idea to gradually build the ‘Silver Fleet’ in the 1960s; each vessel was handcrafted for the River Thames in Kent and Suffolk shipyards.

Since then, Woods’ Silver Fleet has become highly sought after with yacht interiors, finishes and hospitality. The Silver Sturgeon, Silver Barracuda, and Silver Darling have been privately chartered for film stars, politicians, and British Royalty for decades. If a world-famous pop star wants to get a boat to their shows at The O2 Arena, or if Vogue magazine wants to do a photo shoot, this is the company they use. And if you want to be on the river for New Year’s Eve, this is the company to book with.

Now the Chairman, Alan Woods, was awarded an MBE for Services to River Travel in 2020. He is also a Past Master of the Company of Watermen & Lightermen and is an ‘Extra Waterman to HM the Queen.’

The next generation has been in their roles for nearly two decades. Siblings Thomas, Kate, and William Woods navigate the business from Woods Quay, which is their new building on the water near Waterloo Bridge.

The Terrible Thames Tour is on their newly refurbished luxury sightseeing cruiser, Silver Sockeye. (Sockeye is a type of salmon.) Woods also own Tower Bridge Quay, which is where these tours depart. 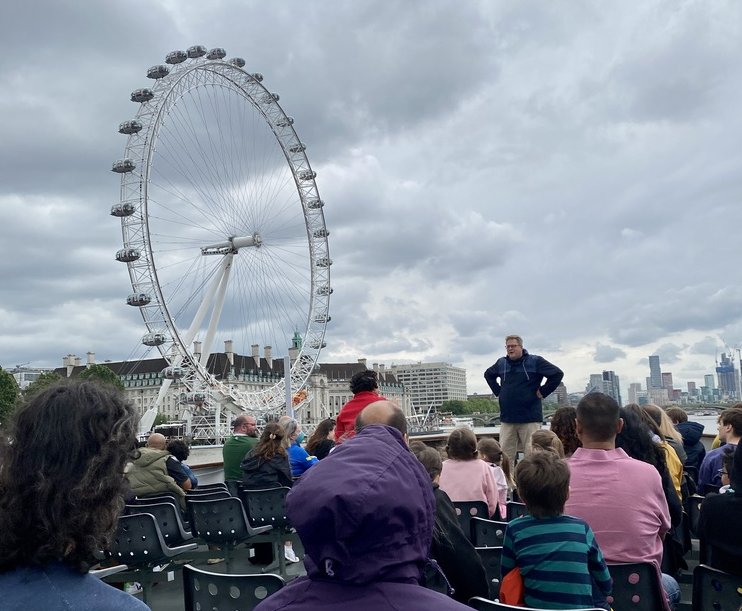 This is a brand new tourist experience from the Horrible Histories team for summer 2021. It’s a 45-minute circular tour on the city’s historic river from Tower Bridge Quay (St Katherine’s Docks side of the famous bridge).

Two actors from the Birmingham Stage Company play the roles of teacher and cheeky pupil as they point out the terrible truth about London’s most iconic landmarks. You’ll hear tales about King Henry VIII, Anne Boleyn, Julius Caesar, the Duke of Wellington, Queen Boudicca, Jack the Ripper, and Captain Kidd, in this history of the Thames with the nasty bits left in (that’s the Horrible Histories unique selling point). 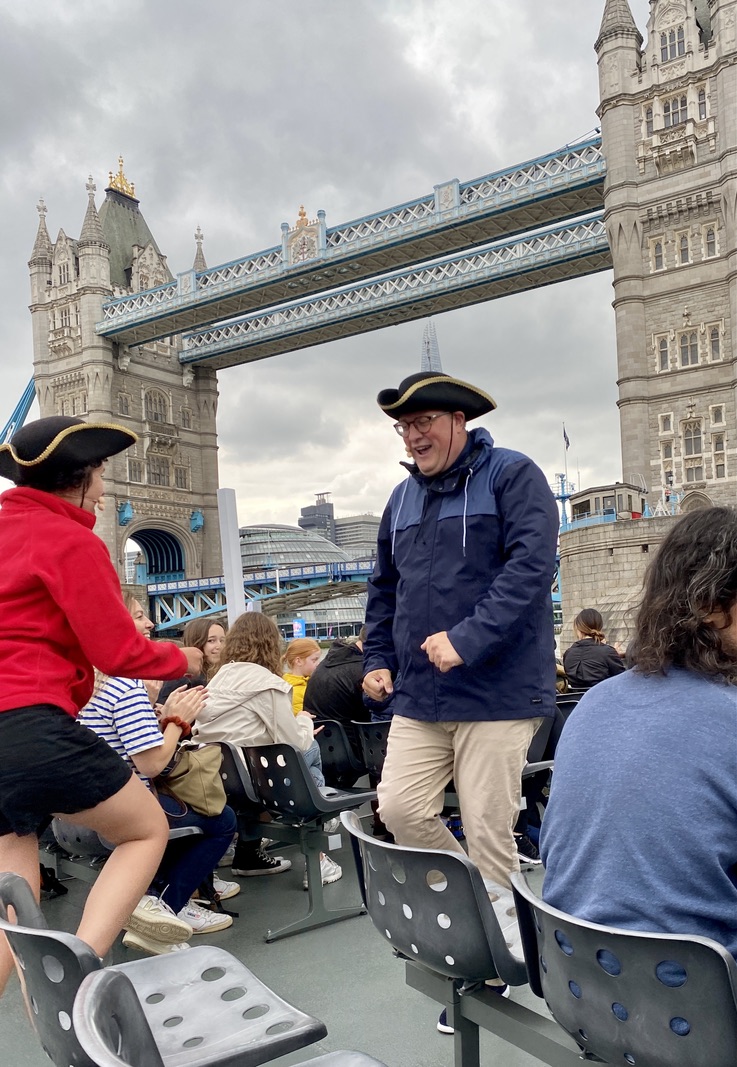 I’ve Been On The Tour.

It would be remiss to write about this new tour and not try it, so I joined a preview cruise before the official opening on 17 July 2021.

The Silver Sockeye has an open-air top desk with four seats on either side of a central aisle. This is London, so the tour goes ahead if it’s raining, so it is best to dress appropriately for the weather. Even on sunny days, it can be chilly on the water, so a light jacket is never a bad idea.

It would be impossible for the two actors to do multiple costume changes throughout the tour, so, instead, they are a teacher and pupil called Billy. Billy has won a history prize to go on the boat tour, and the reluctant teacher has to accompany him. While Billy is probably not a top-of-the-class student, he does love his Horrible Histories books, and his family have generations of London connections. (Billy’s aunts and uncles seem to have single-handedly built London.)

The actors have headset microphones, and there are speakers positioned along both sides of the boat. The audio quality is excellent, and it doesn’t matter if you can’t always see the actors as they run around and entertain. 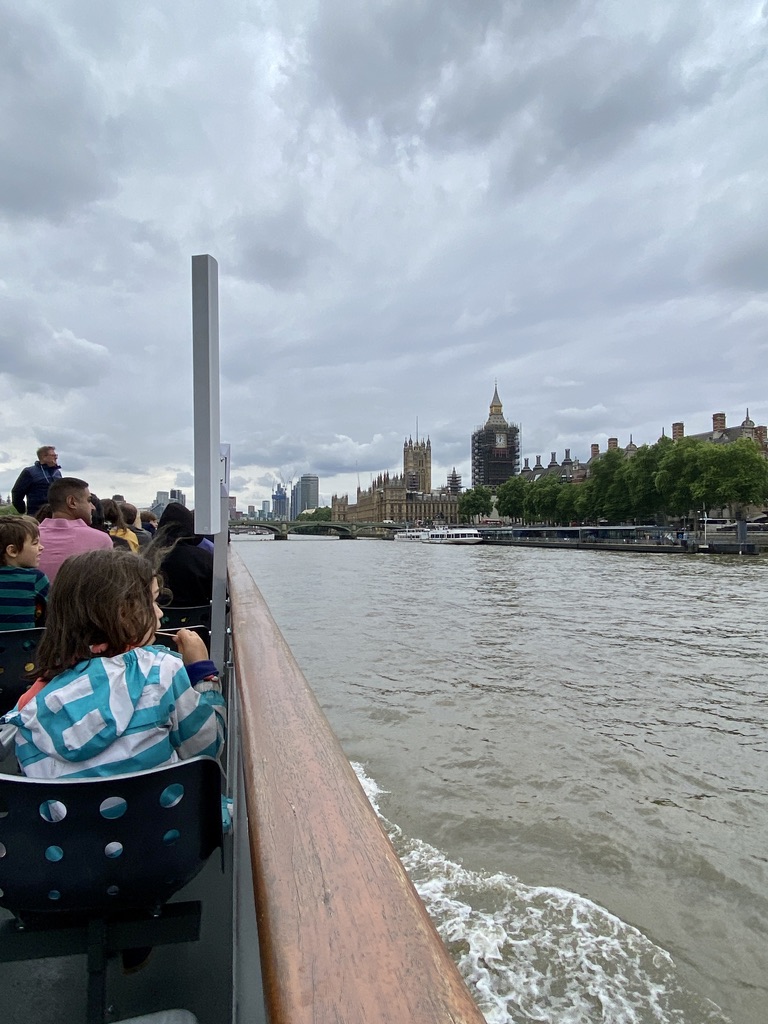 The tour has been kept quite short (45 minutes) to hold the attention of children. So that means the historical facts come thick and fast. (Do remember, everything you hear on this tour is true, unlike other London sightseeing cruises; I’m particularly looking at City Cruises with that comment.) 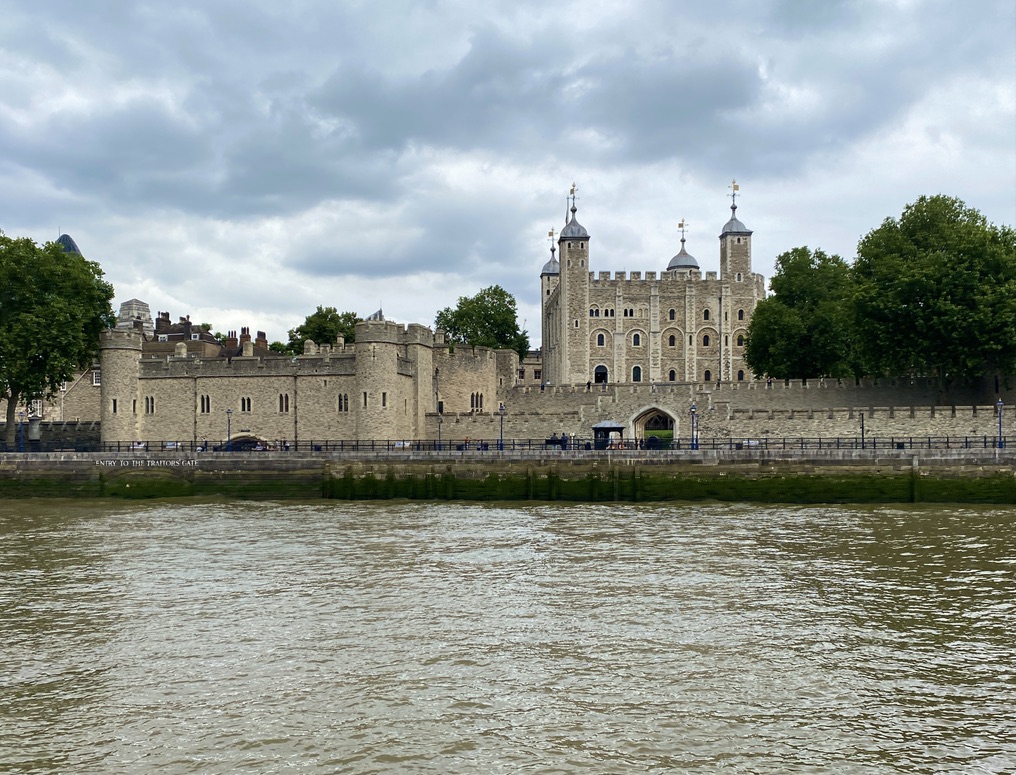 Even before you are under Tower Bridge, you hear about the famous executions at the Tower of London. Did you know HMS Belfast, moored opposite, was built at the same shipyard as the Titanic? Or that school groups can stay overnight on the ship? I can imagine many kids going to school to tell their teachers what they’ve discovered on the tour. 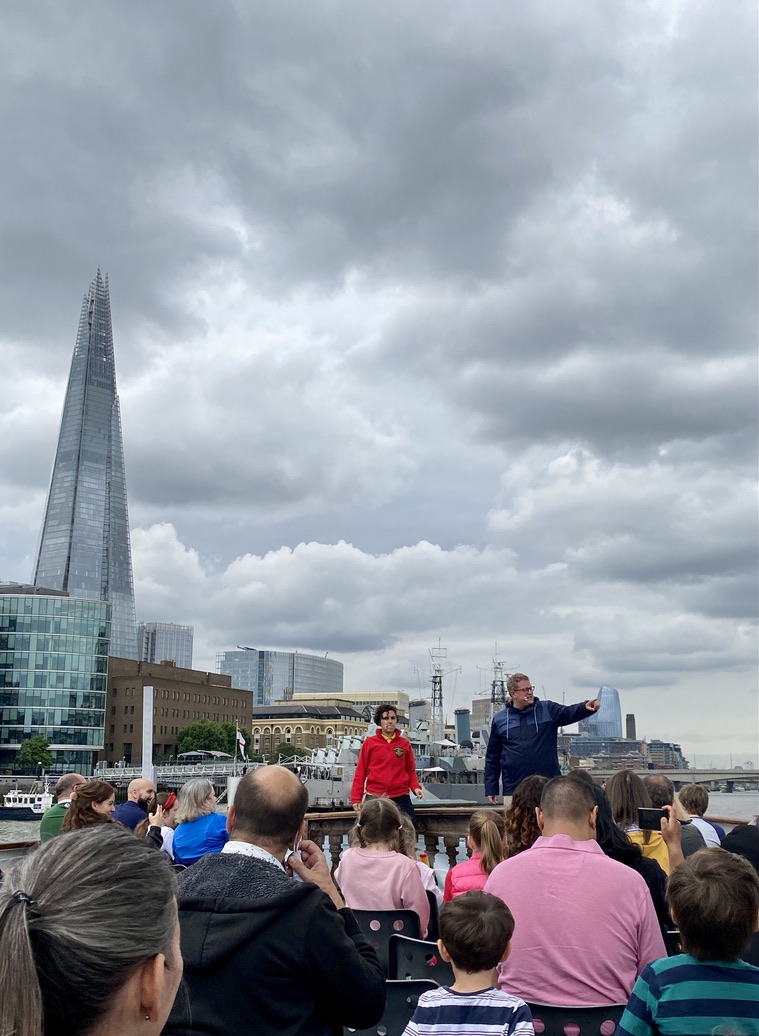 The timing of the scripted information is brilliant as you are at the location as they tell you about it. Even the new ‘super sewer‘ currently being built features in the tour as kids love poo and fart jokes.

Disney’s Frozen gets a mention as the actors explain how many times the River Thames has frozen over and what happened on the ice.

They didn’t shy away from controversy when we reached Cleopatra’s Needle, as there was banter about “What else have we Brits nicked?” And passing the Houses of Parliament gave the opportunity for tales of the Gunpowder Plot in 1605 (a failed attempt to blow up King James I) with gruesome details on what it means to be hung, drawn, and quartered. 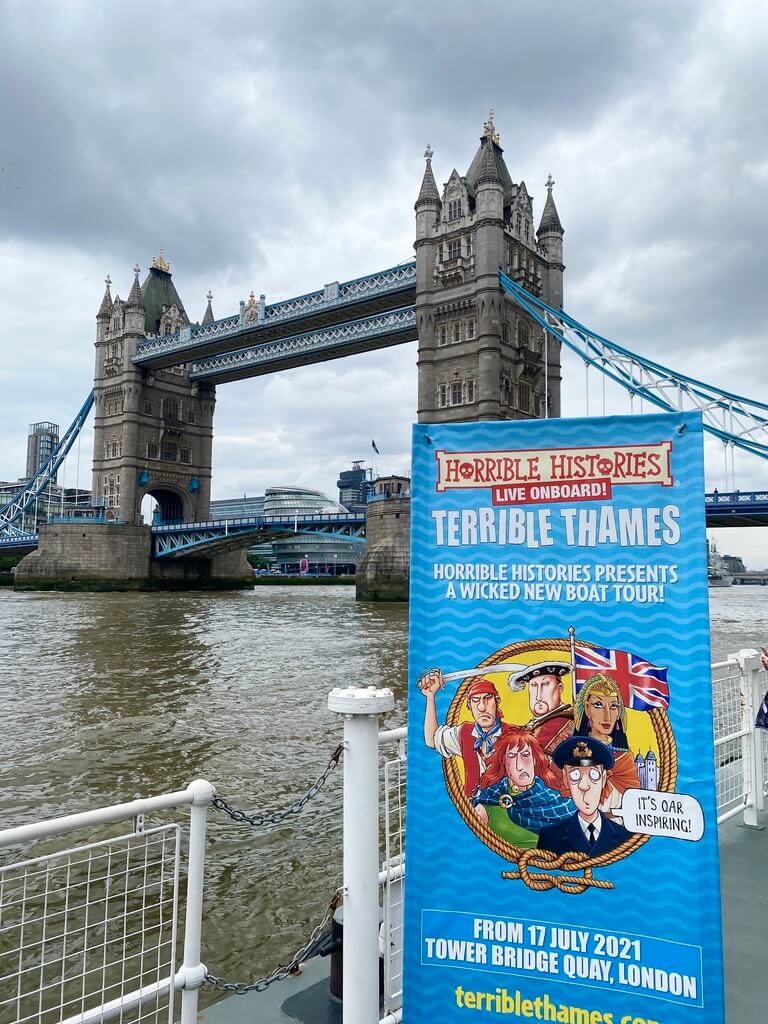 The boat turns back after Westminster Bridge which gives time for more political judgments on the current Prime Minister. The stories move on to WWII as “the oil on the Thames was like a silver stream of light guiding the bombers.” That London was a whaling port may well be a surprise to many. Bombs and assassinations feature as well as the Great Plague of 1665 and the 1666 Great Fire of London.

There are songs and the gory parts of Shakespeare, witches and hidden tunnels, plus slavery and pirates. How they packed so much into a short tour, I’ll never know. But I was impressed, and it was clear that as everyone disembarked, they were exhilarated.

I really enjoyed the Terrible Thames River Tour, and I’m sure it will be a big hit this summer with families. 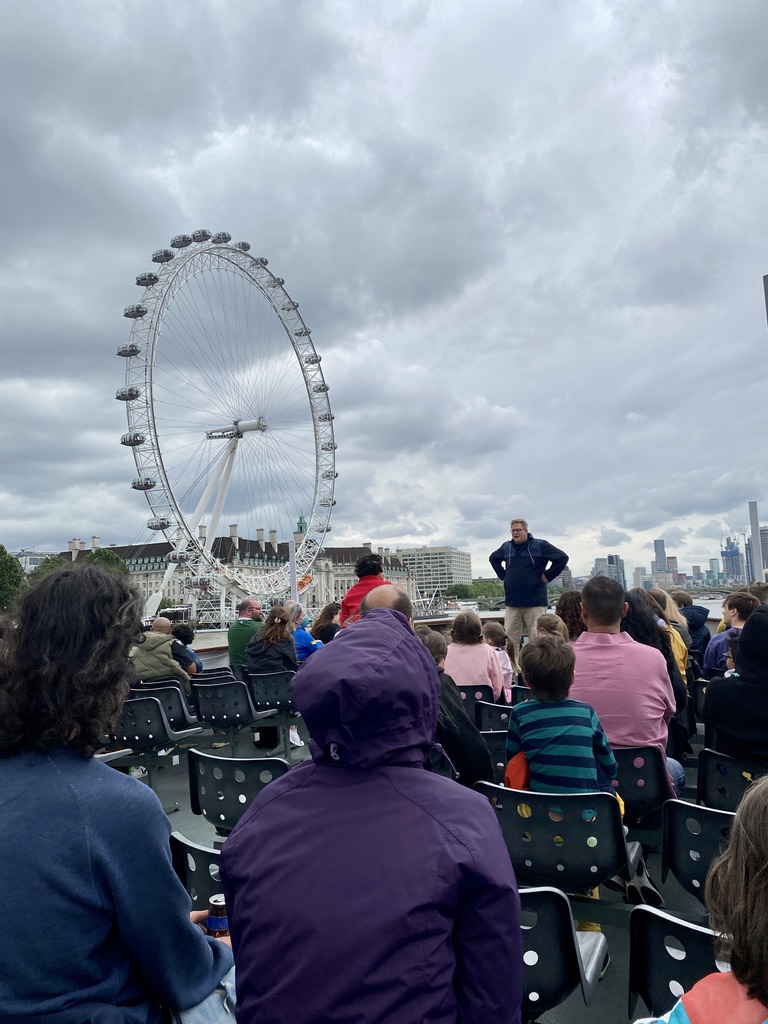 When: Daily sailings from Saturday 17 July 2021

Where: From Tower Bridge Quay
This is NOT Tower Pier in front of the Tower of London. Tower Bridge Quay is on the St Katherine’s Dockside of the famous bridge. Rather fortuitously, the What Three Words location is //curiosity.pirate.rides 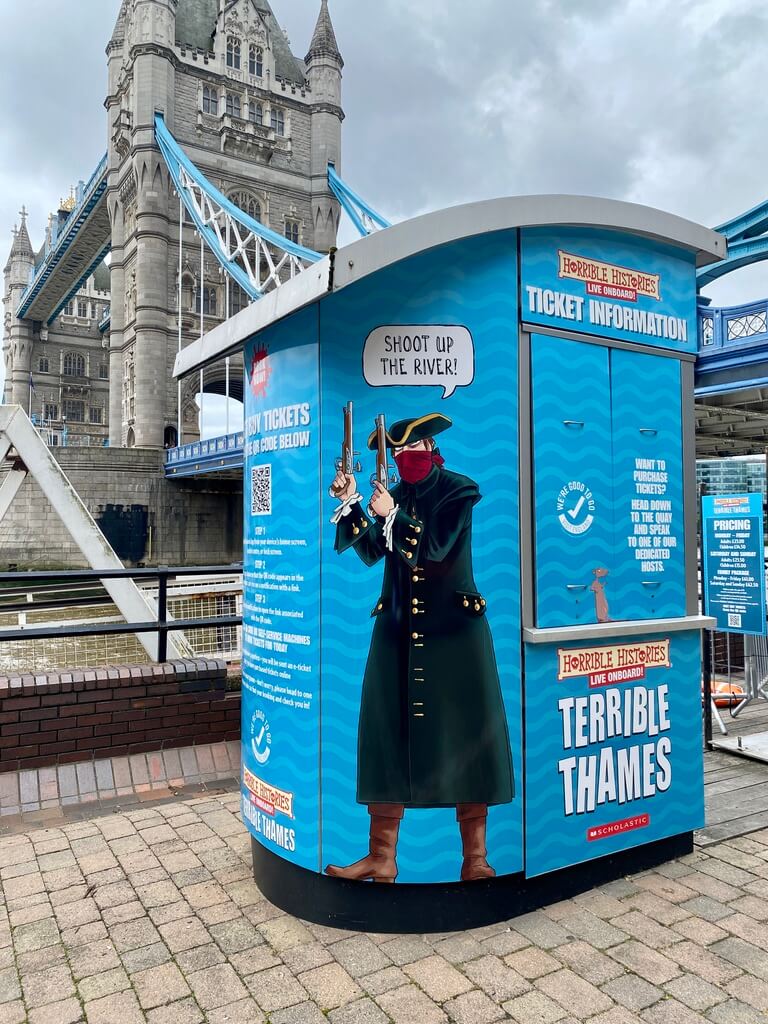