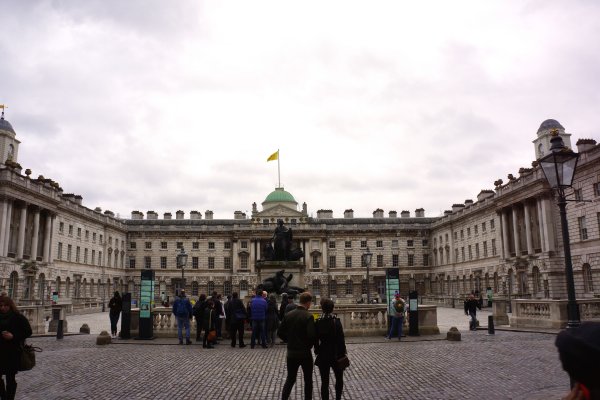 One of the stateliest homes in London, Somerset House at one point was a Tudor palace and today sees use as a venue for the arts and major event location for the city.  Its history began in 1547 when Edward Seymour received a land grant from his brother-in-law, King Henry VIII.  Following Henry’s death, Edward became Duke of Somerset and Lord Protector of the Realm for the young King Edward VI.  Two years later, he pulled down the Strand Inn, one of the Inns of Chancery, and several houses on the land in order to begin building a magnificent home for himself.  Unfortunately for Edward, in the midst of his building scheme, he was arrested for treason in 1549 and then executed in 1552.

Still named after him, “Somerset Place” then fell into the possession of the Crown.  Following Edward’s death and Mary’s ascension to the throne, her half-sister Elizabeth lived there for a time even after she became queen herself.  Always under construction, the process was long and expensive, and even by 1598, historian John Stow referred to it as “unfinished.”  After Elizabeth died and King James VI of Scotland became King James I of England, he made Somerset Place a home for his wife, Queen Anne of Denmark.  Anne was responsible for many renovations and expansions which were designed by Inigo Jones.  As a result of her work, the palace was renamed “Denmark House.”

With the advent of the English Civil War, Somerset House fell under the control of the Parliamentarians who burnt the altar and chapel.   They attempted to sell Somerset House but were unsuccessful, and it was where Oliver Cromwell lay in state upon his death.  When King Charles II came to power in the Restoration, the home fell to his mother, Queen Henrietta Maria, who like Anne before her began an extensive rebuilding plan.  Sir Christopher Wren would add the House to his list of works with a refurbishment later on, but after the Glorious Revolution, King William III and Queen Mary II became more interested in Kensington Palace and lost interest in Somerset, letting it fall into disrepair. 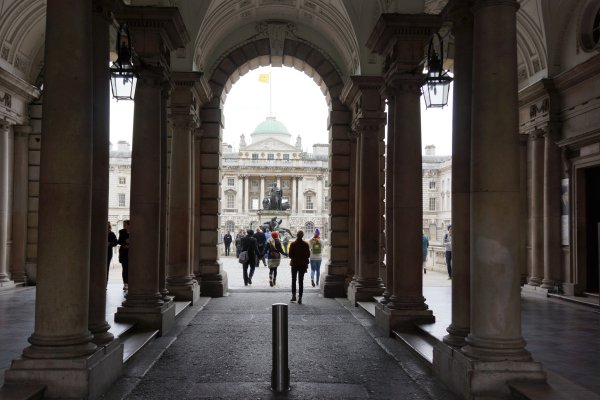 The original Somerset House was then demolished in 1775 to make room for the current building.  Mean to be a public building for London; William Chambers designed and built the new structure in a neoclassical style with three wings surrounding a central courtyard.  Each wing held offices for the government and public societies, while the quadrangle itself was an open public space.  It would be another twenty years before the building was completed, but the Royal Academy of Arts became the first tenant in 1779, occupying the North Wing.  After Chambers had died, the remainder of the work was completed by James Wyatt.  Minor additions continued through the early 19th Century, and then Robert Smirke added the East Wing in 1835.

Around this time, Somerset House (specifically some houses near the South Wing) became a home for the Admiralty and one of the stairways inside the South Wing is still known as the Nelson Staircase.  These houses were later demolished and rebuilt in 1856 and today is still referred to as the New Wing.  Several learned societies also made use of Somerset House, including the Royal Academy, the Royal Society, the Society of Antiquities, and even the University of London.  While the building barely survived being consumed by the Great Fire of London, it was hit by a bomb during the London Blitz and many rooms in the South Wing (as well as the Nelson Stair) were damaged.  It wouldn’t be until the 1950s that these sections were rebuilt under the care of Sir Albert Richardson.

Today, most of the government offices have moved out of Somerset House, and it instead plays home to many artistic exhibitions, cafés, and a restaurant.  During the winter months, the main courtyard is turned into an ice skating rink available to the public and a small Christmas market for the holidays.  Admission to Somerset House is free with the exception of some exhibits, and guided tours are also available.