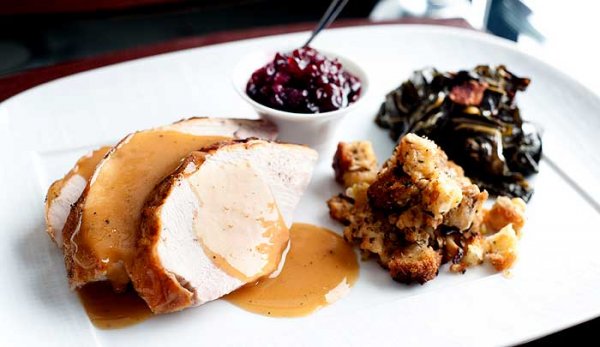 Thanksgiving is a very American holiday despite having English origins. But traveling to London over the Thanksgiving holiday has become very popular with Americans seeking to avoid the holiday gluttony and shopping madness of Black Friday (or their families…). It’s also an easy time to get time off of work for most Americans since most people have a long weekend (well, except for the heroes working retail that weekend) so it’s a great chance to pop over to London without using too much of valuable vacation time. So, we thought it would be a good idea to put together a list of places where you can get a Thanksgiving feast in London – it’s kind of unusual things for a restaurant to do so it can be hard to find these places.

In the United States, the holiday’s origins celebrate the first harvest of the Pilgrims and Puritans who founded the Plymouth colony in Massachusetts.  It is now recognised as a day to be thankful for everything that we have.  Because of its harvest origins, the day is typically celebrated with a large feast.  While not as popular in the United Kingdom, a version of Thanksgiving has existed since 1843 when it was known as the “Harvest Festival”.  The American version of the holiday, while still not widely celebrated, is starting to gain some popularity and many restaurants in London provide Thanksgiving meals in November for expats and locals alike.  Here are a few of our favorites, but you can let us know your own in the comments.

The Arch is one of the best hotels in the city, and Hunter 486 is the hotel’s restaurant boasting a “‘Best of British’ inspired menu”.  From 23 to 26 November, however, Hunter 486 offers an American-inspired Thanksgiving menu that includes traditional dishes such as sweet potato casserole with marshmallow topping and cornbread with stuffing alongside more unconventional options like jeweled fruit and avocado, grapefruit, and chicory salad.

Blues Kitchen celebrates Thanksgiving with a special menu at all its London locations on 23 November this year.  The menu will definitely treat you to some soulful Southern favorites to go along with the music as they offer buttermilk fried chicken, twice-baked mac & cheese, and other dishes depending on the location.  What’s more, if you’re a U.S. citizen celebrating the holiday abroad, you can present your passport for a free Goose Island beer.

This lovely restaurant in Victoria, London starts you off with cocktails before moving onto the main course that includes Norfolk bronze turkey, cornbread, sausage and sultana stuffing, maple butter roasted potatoes, creamed corn casserole, and glazed sprouts with bacon, followed by a choice of pumpkin brulee pie or pecan pie.  The menu is only offered on 23 November, so you better get it while you can.

Iconic American 80s film The Breakfast Club lends its name to this American-style restaurant, so naturally, they have a Thanksgiving menu that will make any U.S. citizen or America-loving Brit happy.  The three-course meal for £28 per person begins with a butternut squash bisque with jalapeno and coriander cornbread, followed by bacon and beer roasted Norfolk turkey with Hasselback potatoes, pan juices, and cranberry relish.  Sides include three cheese mac & cheese, sauteed kale, spiralized sweet potato, and more.  Pumpkin pie with ice cream wraps up everything for dessert, so you’ll definitely get your money’s worth.

Bodean’s is mostly known as a barbecue restaurant in London, but that doesn’t prevent them from giving an American Thanksgiving their all.  Along with your choice of clam chowder or a pulled pork quesadilla, they offer a sharable turkey platter with drumsticks, glazed ham, mashed potatoes, stuffing, and grilled veggies.  You can pick from pumpkin or key lime pie for dessert and the price is roughly the same as Breakfast Club along with multiple locations from which to choose.  If that might be too much food for you, the Pilgrim Burger is half the price and tops the beef with turkey, ham, and stuffing.

Jackson & Rye is focused on American brunch food but serves up its best Thanksgiving menu for Thanksgiving weekend from 23 to 26 November.  For just about £2 more than the previous two entries, you get a three-course meal with appetizers, main courses, and several dessert options.  Each of these courses includes options such as shrimp and bacon chowder, chicken wings, boned and rolled turkey with sweet potato, veal juis, and rosemary, and of course pumpkin pie, though you can also pick from lemon tart or chocolate fondant.

This Creole restaurant in Covent Garden, Kings Garden, and Canary Wharf offers a couple different options for Thanksgiving dinner.  On the one hand, you can have a pit-smoked turkey with stuffing, cornbread, mashed sweet potatoes, and green bean casserole.  You can also choose a self-styled lobster feast for £10 with a whole lobster, lobster roll, or lobster mac & cheese instead of the turkey.  Everything is served family-style and costs £35 (unless you get the lobster instead).  The menu is slightly different at Kings Garden and Canary Wharf, so make sure to call before the 23rd to check on what’s available.

Of course, US chef Wolfgang Puck’s Cut offers a Thanksgiving menu for the holiday.  It’s quite possibly the most expensive Thanksgiving menu on this list at £110, but for that, you get a turkey wild mushroom stuffing, potato puree, cranberry compote, and gravy.  Sides include red jewel sweet potato with pecans and dessert options are pecan pie, pumpkin & ginger cheesecake with candied ginger ice cream, russet apple & blackberry crumble with vanilla ice cream and a salted caramel brownie

Balthazar is a restaurant that started in New York City, so its London location recognizes its American origins on Thanksgiving with a special menu for £55.  The set menu includes spiced butternut squash soup, winter kale salad, a traditional turkey with all the trimmings, and pecan or pumpkin pie for dessert.  The restaurant also offers a special gingerbread flavored cocktail for the holiday and you can also order a sharing pie for the table with pumpkin, pecan, or apple pies as your choices.

Christopher’s bills itself as London’s original American restaurant, so it brings its A-game for the Thanksgiving holiday.  The main dish features ballotine turkey with cornbread, hazelnut, and cranberry stuffing or you can opt for Missouri-rubbed rack of lamb with a pulled lamb, pomegranate, and avocado tamale.  Desserts feature pumpkin pie, baked pecan pie cheesecake, spiced apple and almond cobbler, or chocolate fudge brownie.  The three-course meal costs £60 and is served all-day, so you won’t need to rush to get there on the 23rd.