The Old Deanery is a Grade I seventeenth-century mansion house close to the West Front of St Paul’s Cathedral. Set back with its own courtyard, it is among a small handful of surviving secular buildings erected in the aftermath of the Great Fire of 1666. It is the office of the Bishop of London and recently underwent restoration. It’s not somewhere we could usually see inside, so I booked a ticket for a guided tour during Open House London. 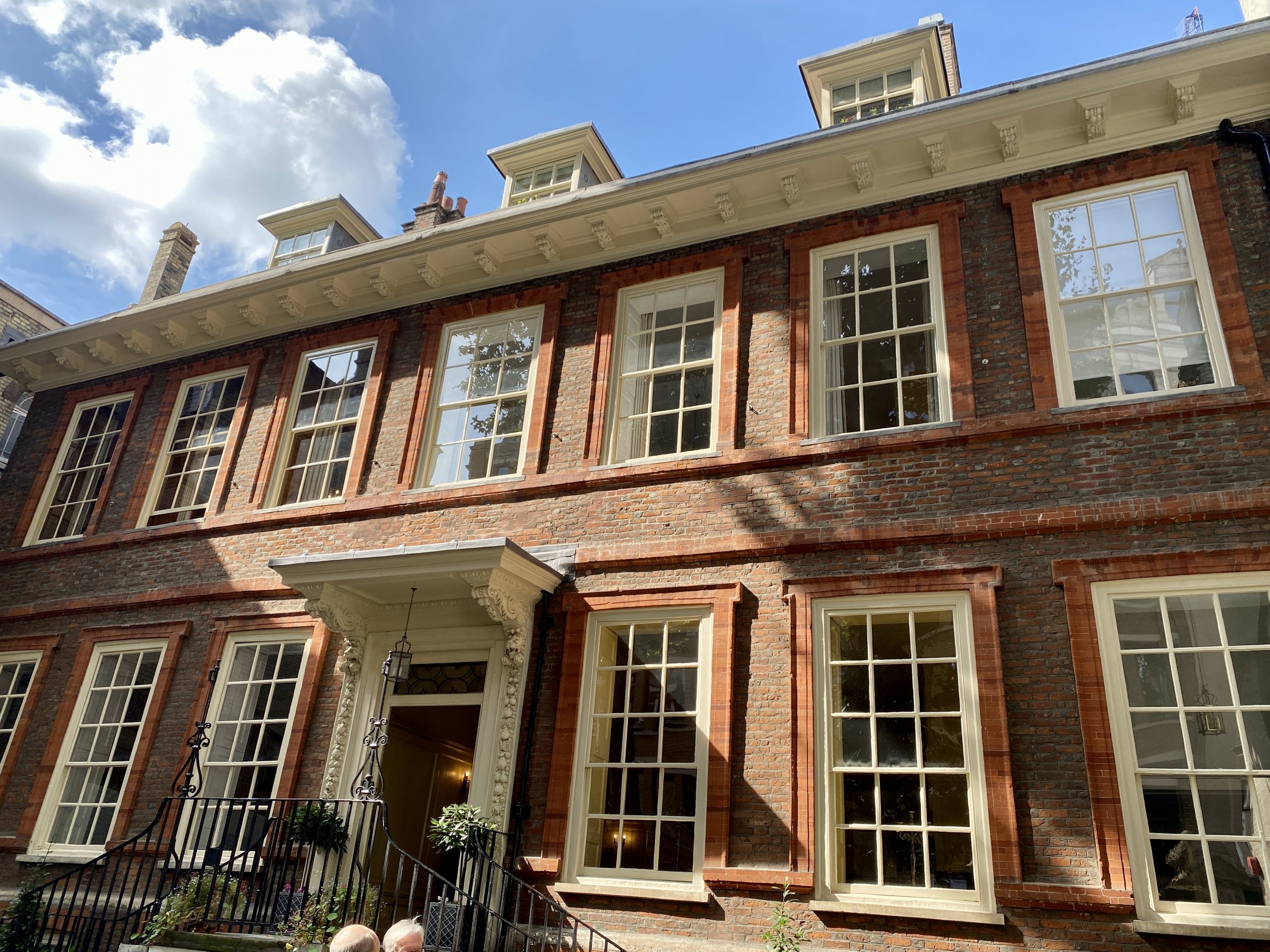 What Was There Before?

The exact form of the pre-Civil War Deanery House at St Paul’s is uncertain. Described by John Stow in 1598 (English historian who wrote the Survey of London in the sixteenth century) as a ‘fair old house’ and dating originally from c.1145 with later extensions and renovations.

During the Civil War, Parliament decreed its temporary use as a prison in 1643, but in 1645 it was repaired and given over to the ‘Sunday lecturer’ at St Paul’s, Cornelius Burges. It was surveyed by Parliament in 1649 but destroyed in the 1650s during the ‘troubles.’ Shops were built on the site during this time. The Dean’s property was returned at the Restoration of the Monarchy in 1660, and the 1669 Act was passed ‘for the building of a Mansion-house for the Dean of St Paul’s Church London.’

During the latest renovations, there were excavations in the front courtyard. The remains of a brick-paved cellar floor were discovered. This dated from one of the pre-1666 houses that existed on the site and was overlaid by more than 3 feet thickness of Great Fire of London debris. 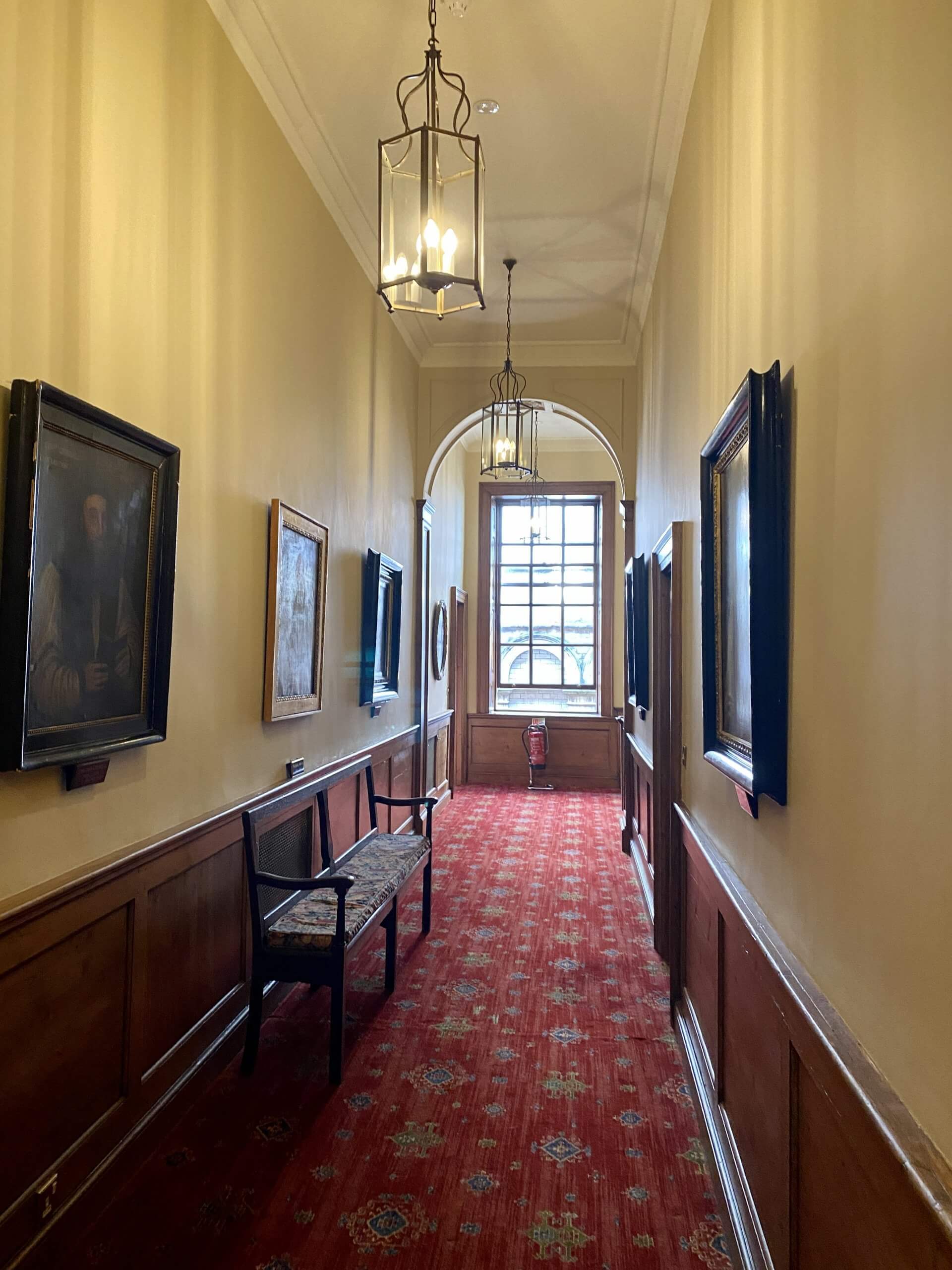 For a long time – centuries in fact – the building was attributed to Sir Christopher Wren. But more recent research now thinks the original architect was the surveyor Edward Woodroofe, who was an assistant surveyor to Wren on the rebuilding of St Paul’s Cathedral. It was Woodroofe who signed the building contract, but it is thought Wren may have been consulted.

Woodroofe has an excellent draughtsman in his own right. From 1662 he was Surveyor to the Dean and Chapter of Westminster, and in the mid-1660s, he was associated with the development of Hatten Garden. He also designed the nearby Charterhouse.

He worked with Wren on St Paul’s from January 1668, overseeing Wren’s short-lived attempt to patch up the fire-damaged nave of Old St Paul’s. This work stopped in April 1668 when a damaged column collapsed. The building was demolished in July 1668, and work on the new St Paul’s began in 1675.

Woodroofe was a mason at Westminster Abbey before the Restoration and was buried there in 1675. 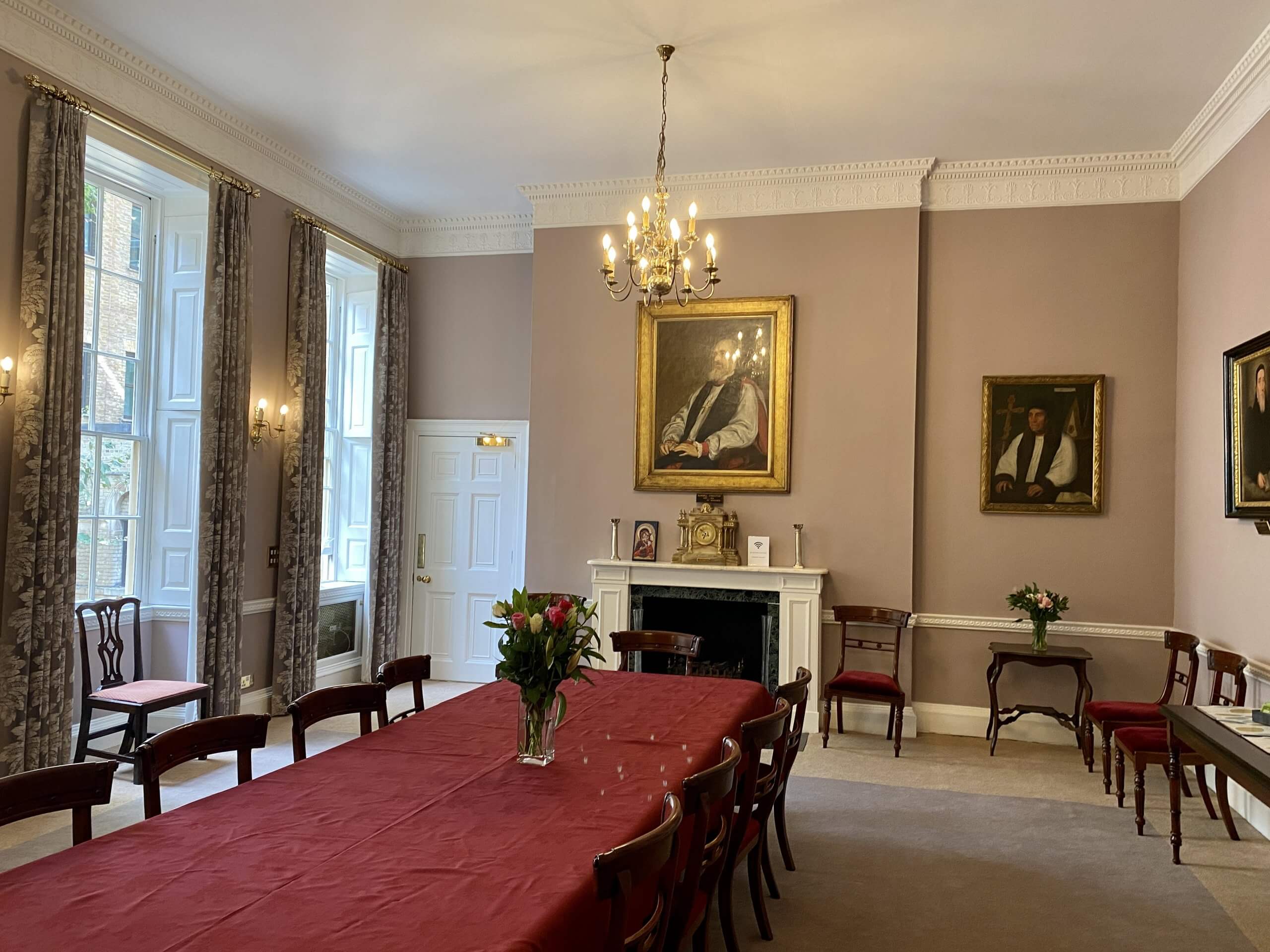 William Sancroft became Dean of St Paul’s in 1664, and it was he who commissioned the new Deanery House. Sancroft was a Cambridge-educated priest and deft clerical administrator with a strong interest in architecture.

In 1650, when still at Cambridge, he sent home for his copy of Sir Henry Wotton’s The Elements of Architecture, first published in 1624. Sancroft went into voluntary exile during the Civil War and visited Amsterdam, Utrecht, Geneva, Rome, Venice, and Padua in 1659–60, acquiring books on art and architecture on his travels.

Sancroft had worked with Sir Christopher Wren before Deanery House as his previous post was as Master of Emmanual College, Cambridge. Appointed in 1662, he commissioned Wren to design a new classical, east-orientated Chapel flanked by a cloister.

Once completed in 1673, Deanery House became the residence of William Sancroft. He used the building as his home, administrative office, and for entertaining. He also contributed £1400 towards the rebuilding of St Paul’s after the Great Fire of London.

Bishop Henry Compton was the Bishop of London from 1675 to 1713. While he lived at Fulham Palace, he oversaw the rebuilding of St Paul’s Cathedral after it was destroyed during the Great Fire of London in 1666. 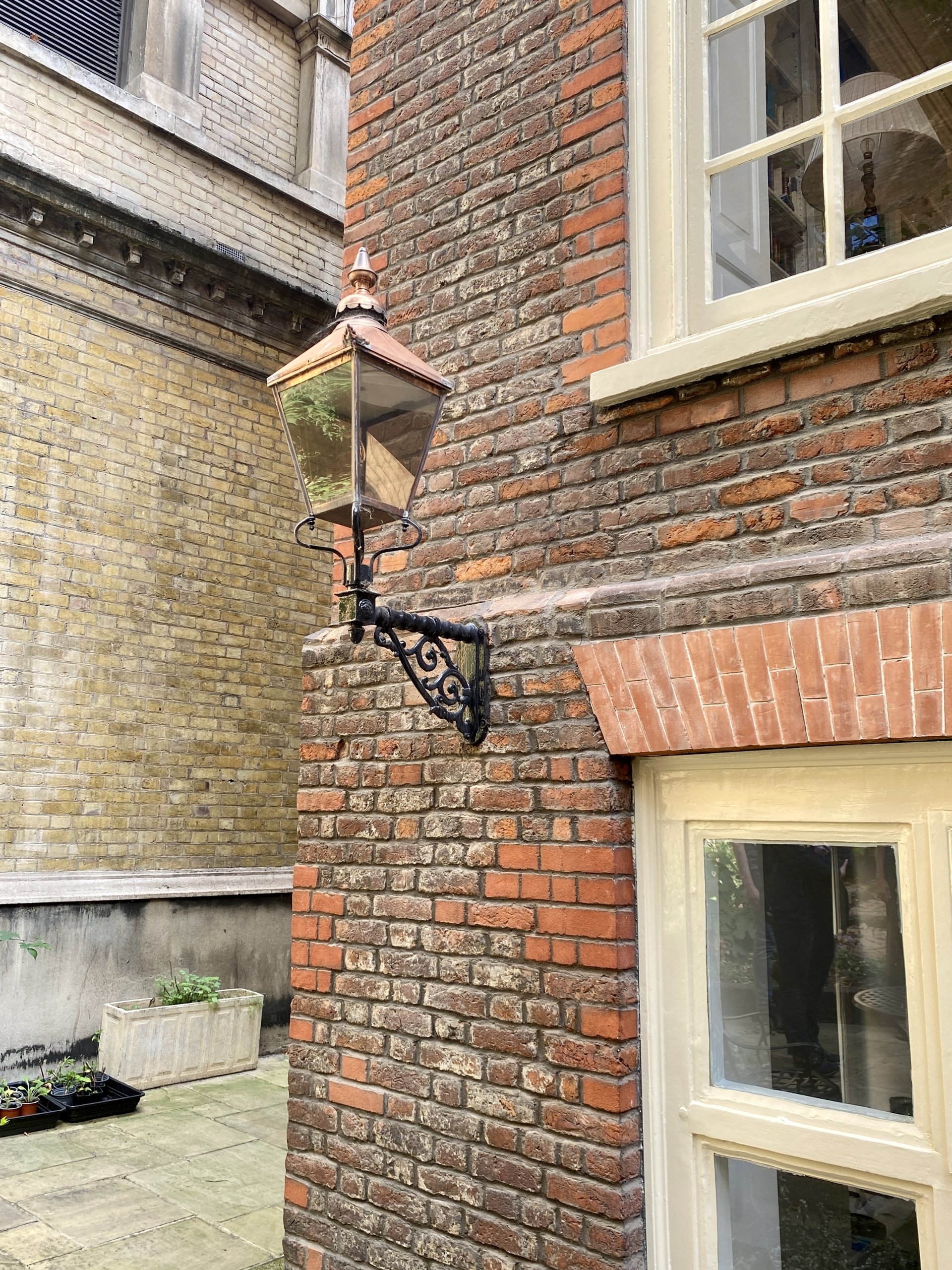 The building was designed to have equal status to leading City merchants’ houses. There were four classes of mansion house allowed in London after the Great Fire, and this was the fourth class. Stylistically, Sancroft’s new Deanery House did not depart radically from the domestic architecture of the City of London in the 1650s and 1660s.

The building was free-standing with a fire break. Seventeenth-century plans of the City of London show that there was a row of shops where the wall at the front of the house now stands. As so many City residents left after the Great Fire of London, there was no longer a need for these traders. 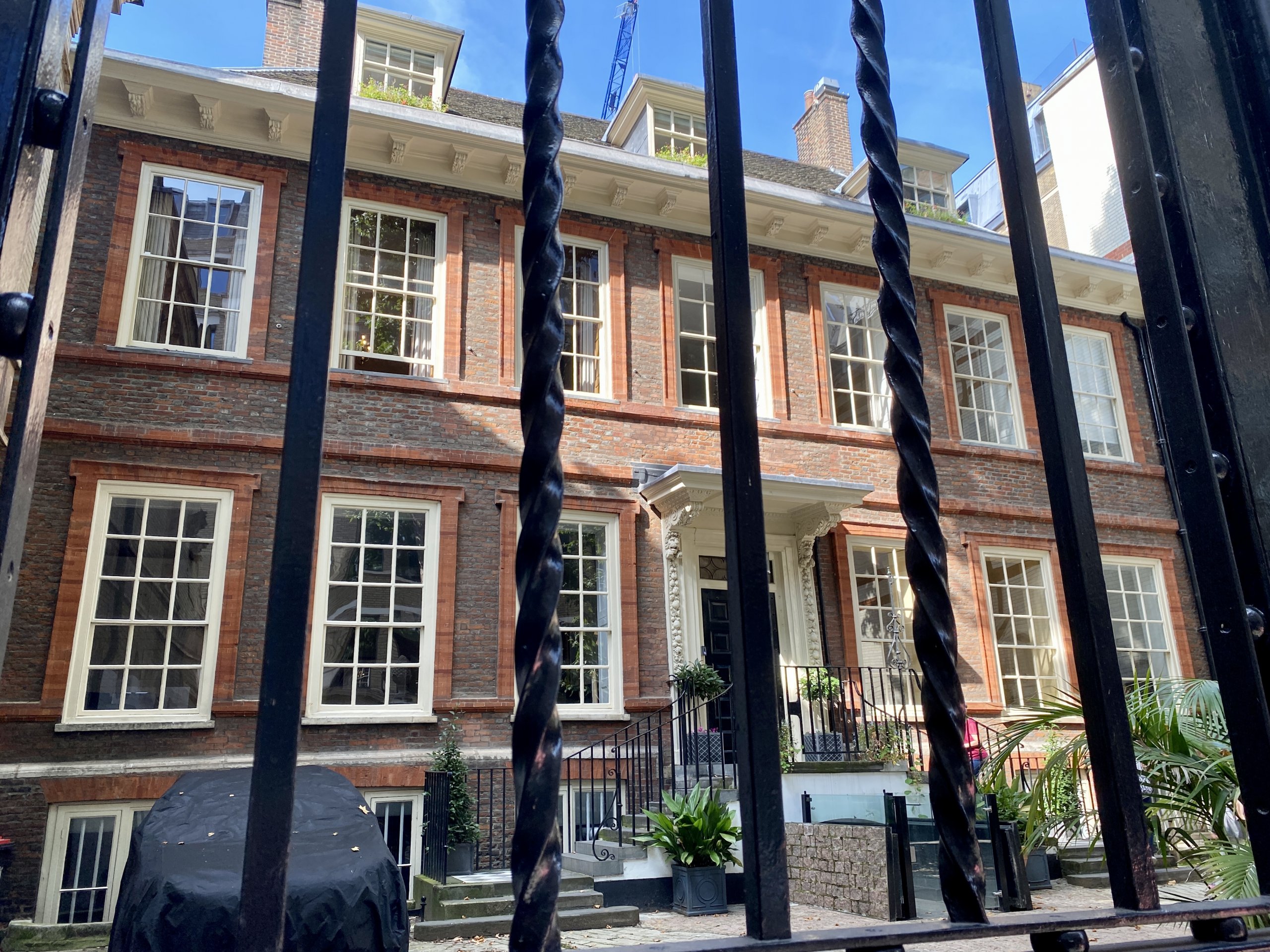 To the side of the house stood its stables and a coach house which also ran along Carter Lane. These buildings were replaced by a new Choir School in the mid-1870s. The Choir School moved to a new building east of St Paul’s Cathedral, in New Change, in 1967. The building is now a youth hostel and has been used to house the homeless since the pandemic started. 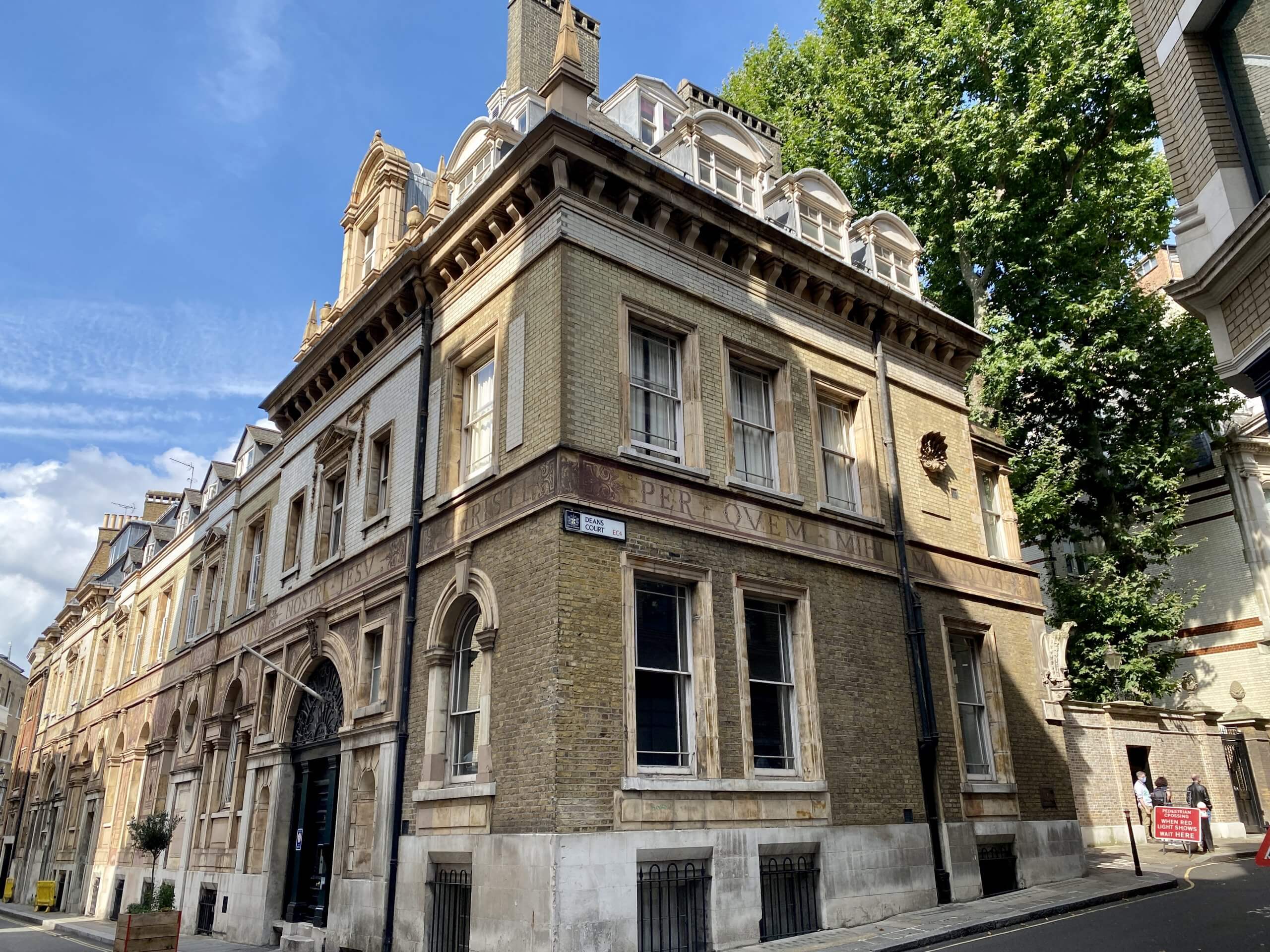 Thomas Newton, Dean from 1768 to 1782, made some alterations, including reforming the front courtyard with a new wall and paired gates on either side of a central doorway, in place of the single entrance of the 1670s.

Works mentioned in the early nineteenth century include the installation of a water closet, the fixing of several marble chimneypieces, and the replacing of the hearth in the library. In 1821 the entrance hall and staircase were painted, and grained wainscot (oak) and that mahogany graining was also executed in the library.

Following bomb damage in the Second World War, the Deanery House was restored and modernized in the 1950s by W. Godfrey Allen, then Surveyor of St Paul’s – who believed at the time that the house had been designed by Sir Christopher Wren.

In 1977 it was decided that the Deanery House would no longer be the residence of the Dean of St Paul’s Cathedral. Major structural work was carried out in 1981–82, both in the basement and the roof, to give the house greater stability. An extension was built to the rear, which, at the time, was considered sympathetic to the original house. 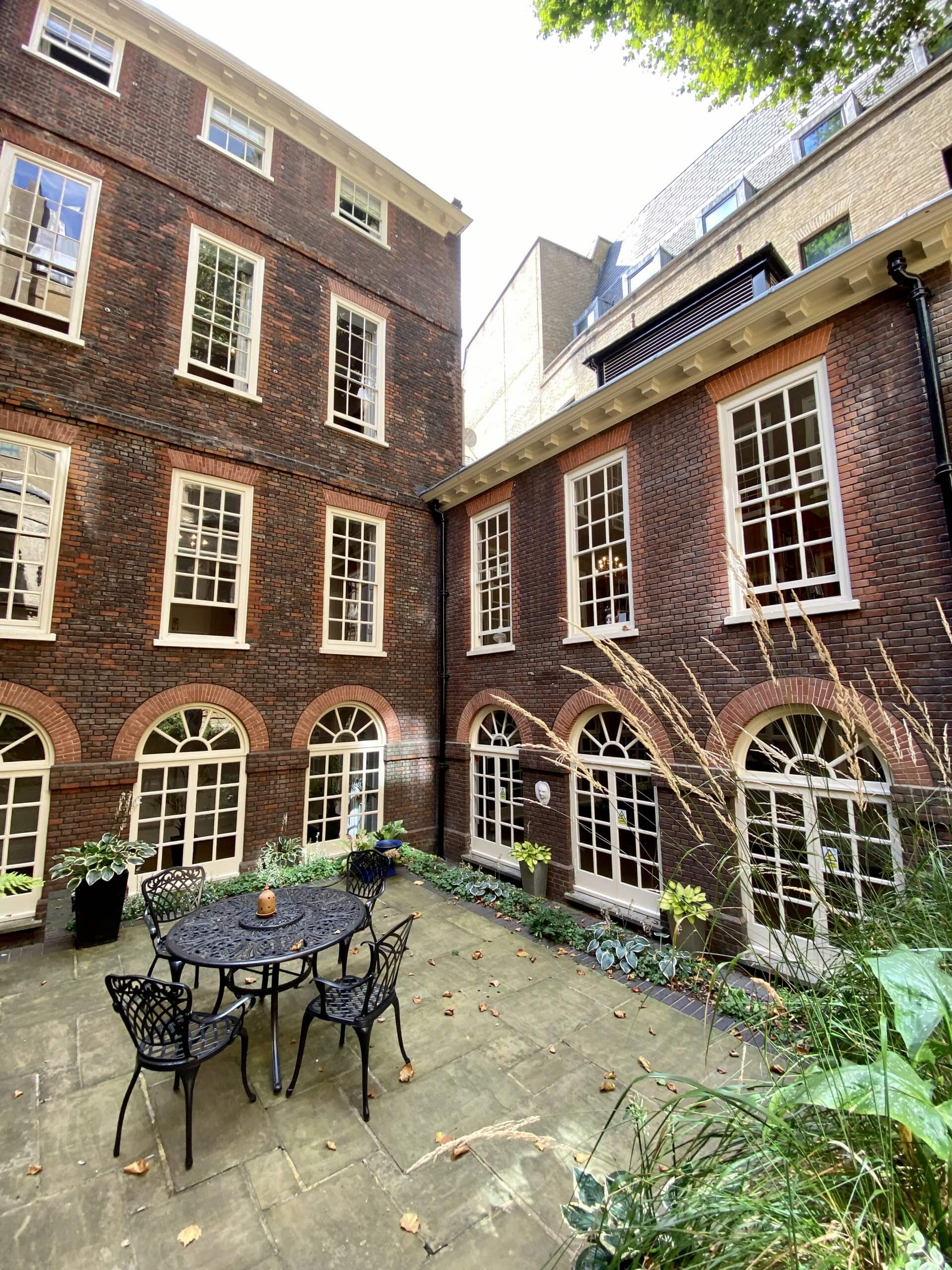 The building was leased to Fennoscandia Bank as its London Headquarters from 1981 to 1992 when the bank went bankrupt.

In 1996 a flat was created in the attic for the then new Bishop of London, Richard Chartres, and his family, overseen by architect Tom Hornsby.

When the 2017 Bishop retired, the Church Commissioners for England saw the opportunity to upgrade the house to twentieth-first century standards. Since 1996, the house had not been altered or subject to anything other than minor refurbishment, which meant that several areas in the building required attention.

Caroe Architecture, based in Cambridge, took on the most recent repairs and renovation work. It included external repairs, comprehensive internal refurbishment of the residential and office accommodation, and significant improvements to accessibility.

Although the ground and first floor still largely follow the seventeenth-century plans, the building has been much-altered over its lifetime. The most recent work addressed many of the areas that were altered thirty years previously and sympathetically re-presented the whole building incorporating facilities suitable for its next period of use.

There were also repairs to the front boundary wall to preserve the wall and the majestic 180-year-old London plane trees planted within the front cobbled courtyard. 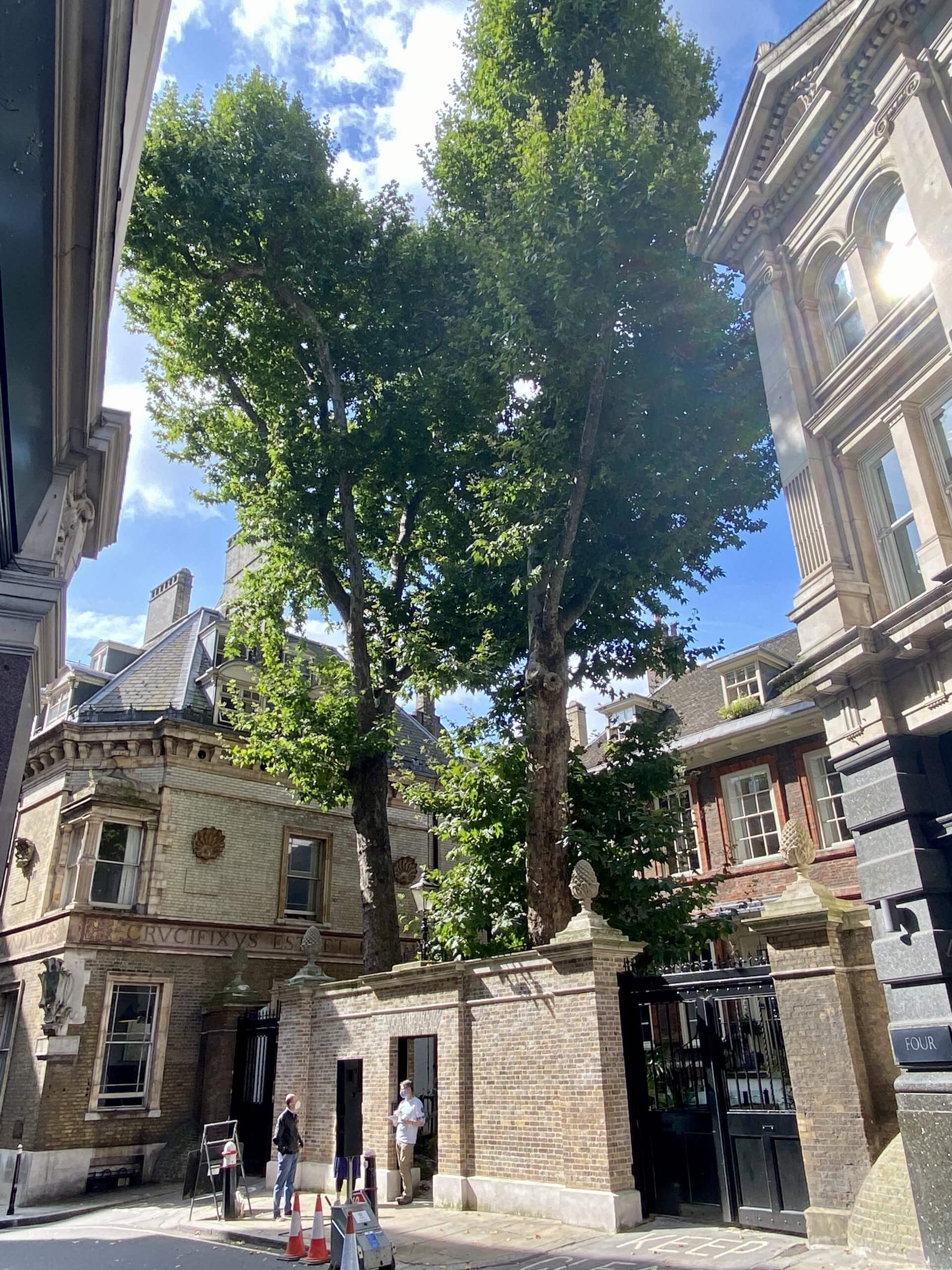 The two-story, red brick house is of seven bays, with a dentil cornice, dormers, a fine door case, and a double flight of entrance steps up to the front door. 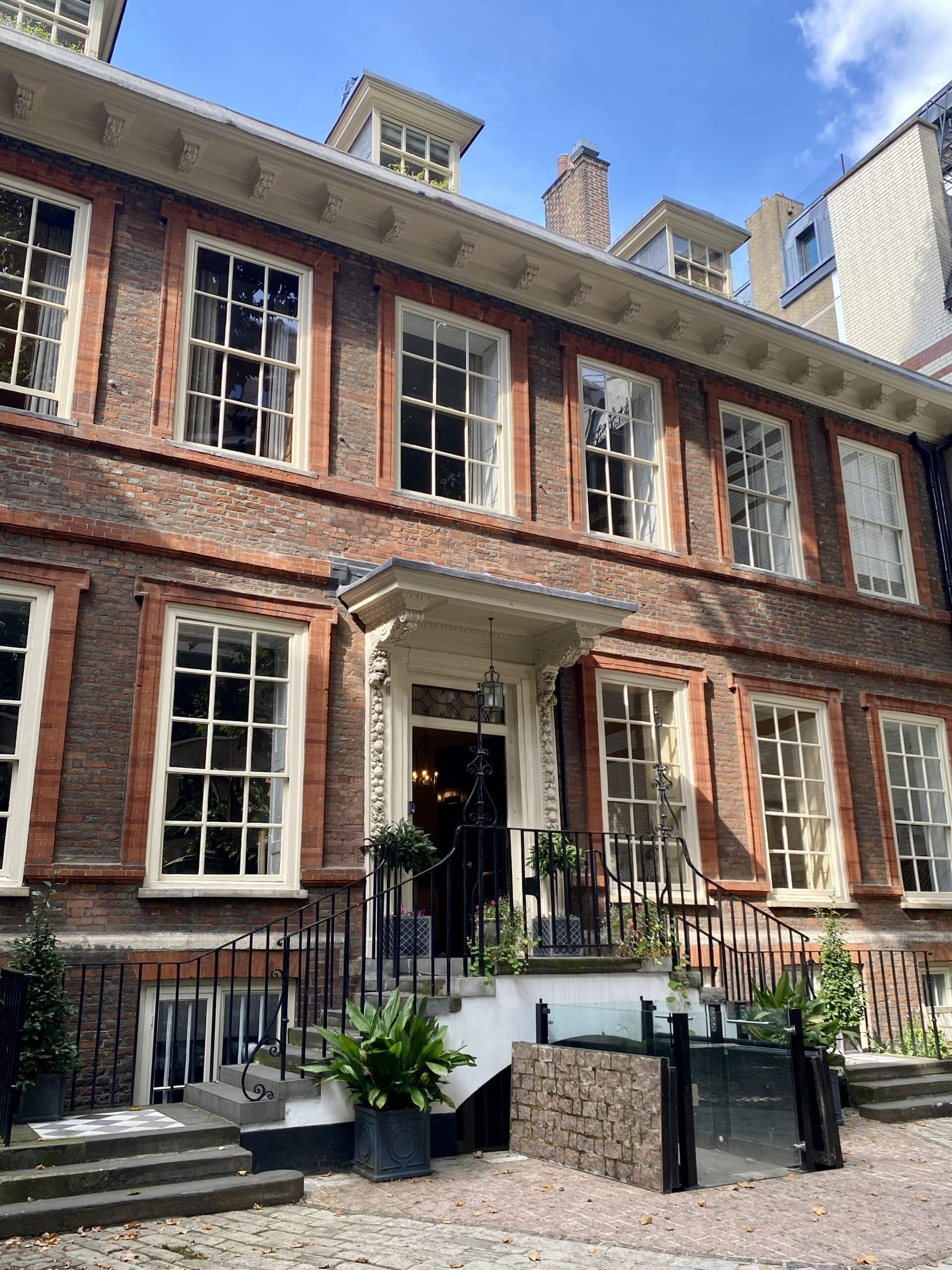 The windows were changed to sash probably over a number of years. The ground floor on the west side has sash windows with more substantial glazing bars, which seem likely to date from the mid-eighteenth century. Most of the other windows, with the narrower profile of the glazing bar, may date from works carried out in the early 1820s. Accounts of 1820–1821 note new stone cills were inserted and describe the lead-paned attic dormer windows being converted to sash at that time.

The 1677 survey shows that the front door originally had a shell-like hood porch, which has been replaced with a flat projecting hood. The main doorcase is still framed by richly carved timber scrolled brackets with decorative drops of carved fruit and foliage hanging from carved lions’ heads. 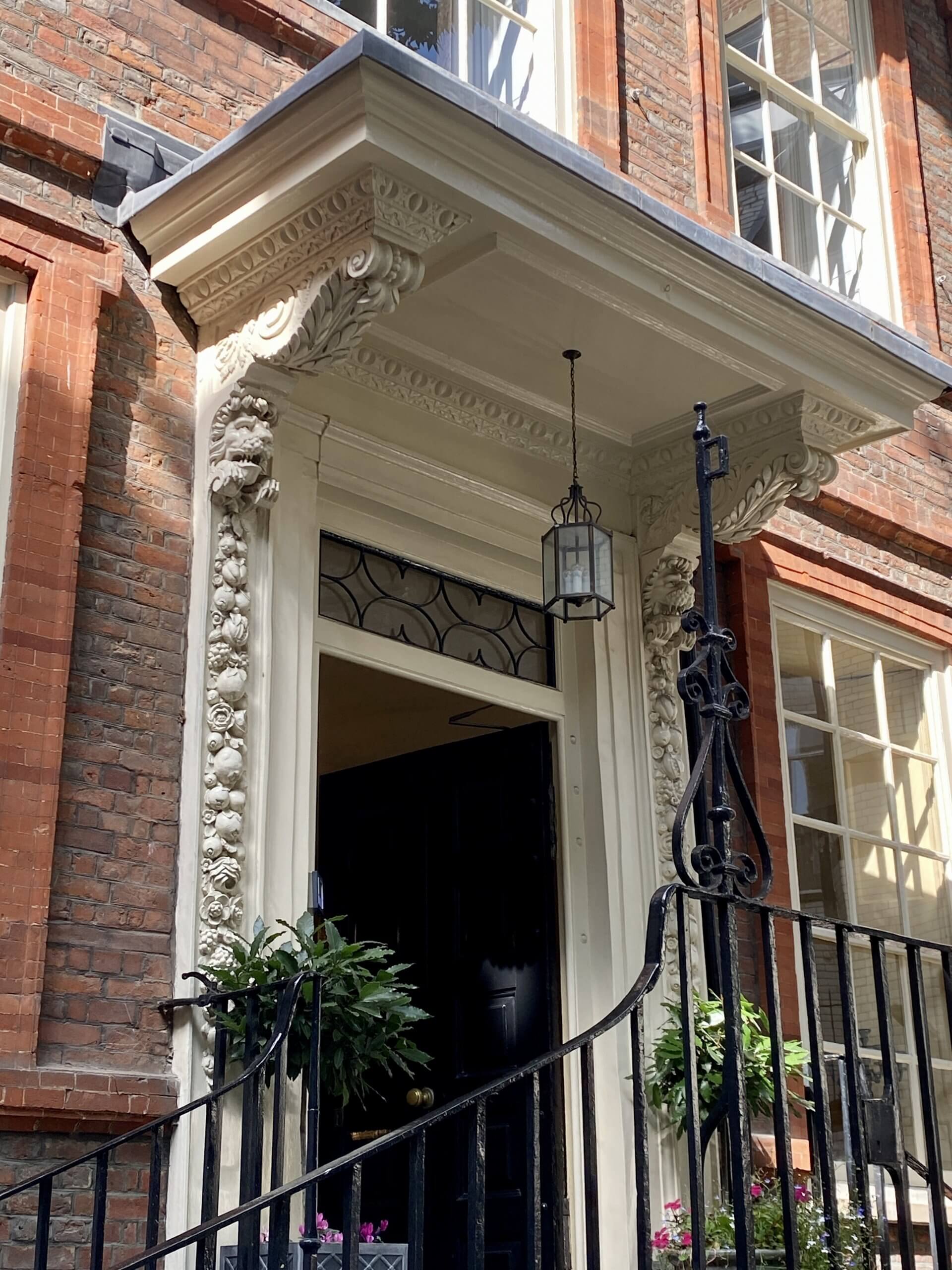 The central door opens into the south end of the main hall. This is now a reception room to welcome visitors. Through corridors and doorways, we reached the 1980s extension, which blends incredibly well with the original building.

The house has two staircases – a narrower set for the servants and a wider staircase for residents and guests. The main room on the first floor was the ‘great parlor’ or dining room which has impressive crown molding (coving). 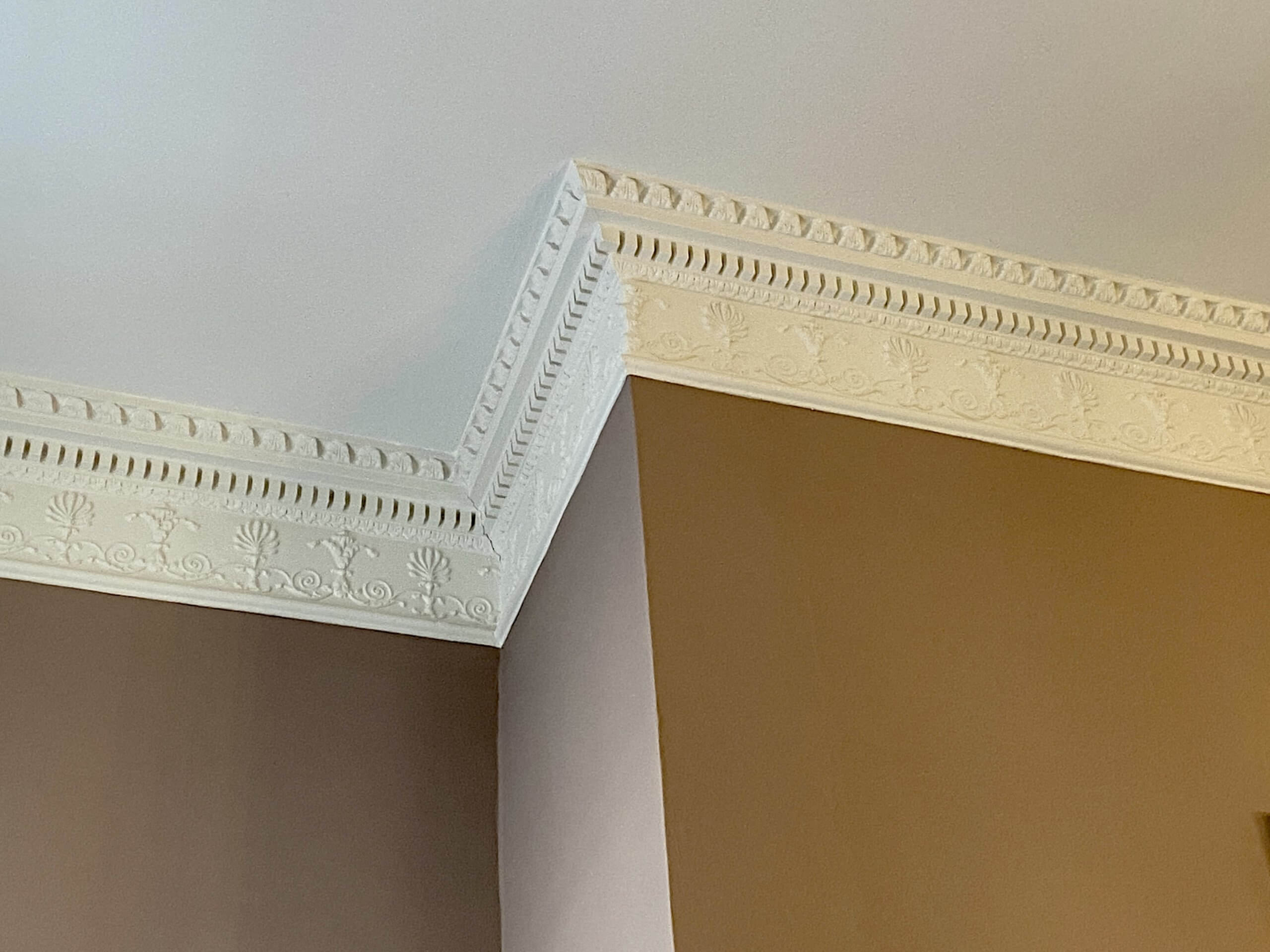 Down to the garden, there is another incredibly tall plane tree as the City of London takes tree preservation seriously. There are also pieces of stone architectural salvage saved from the nearby St Mary Le Bow Church. 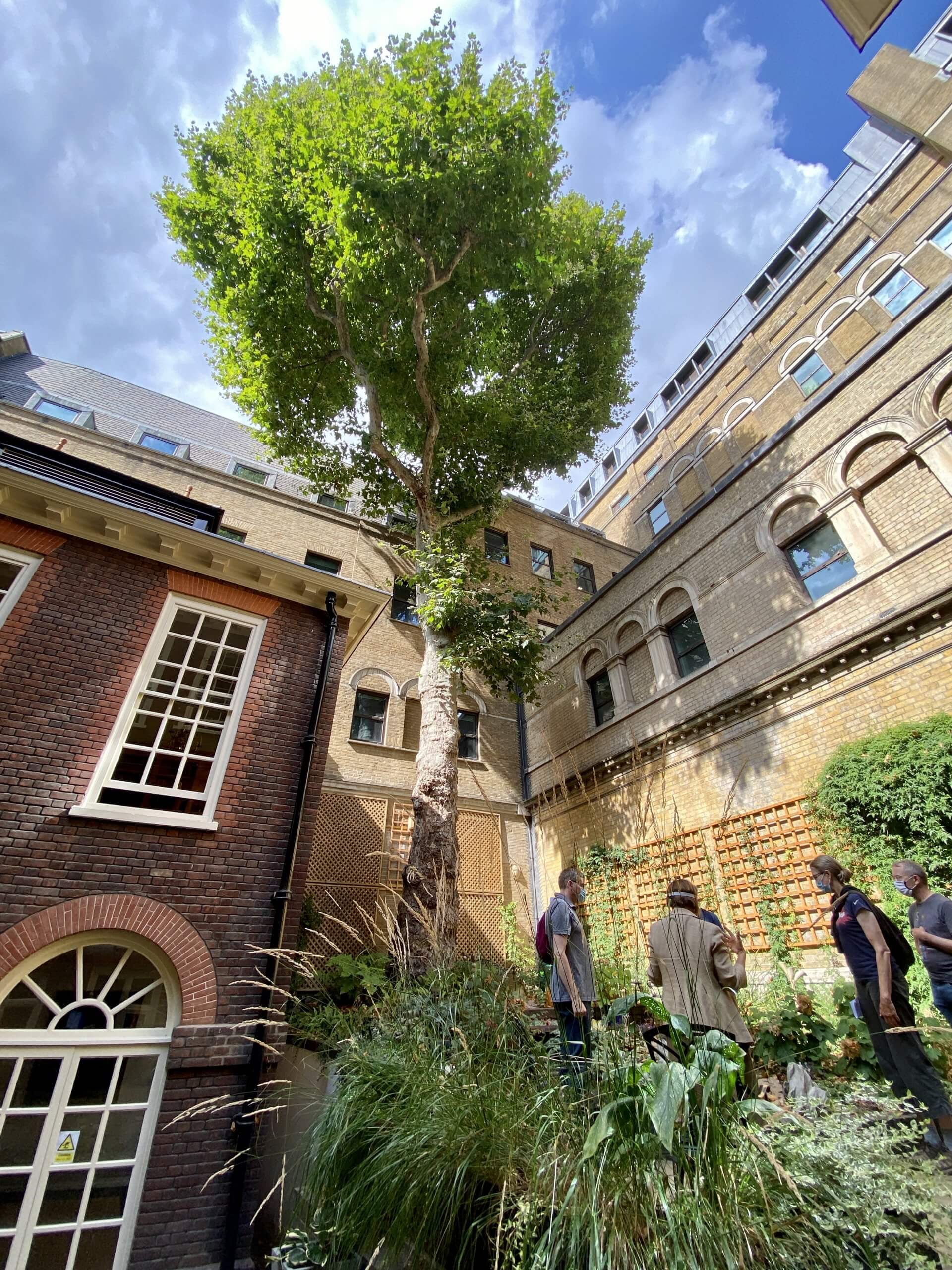 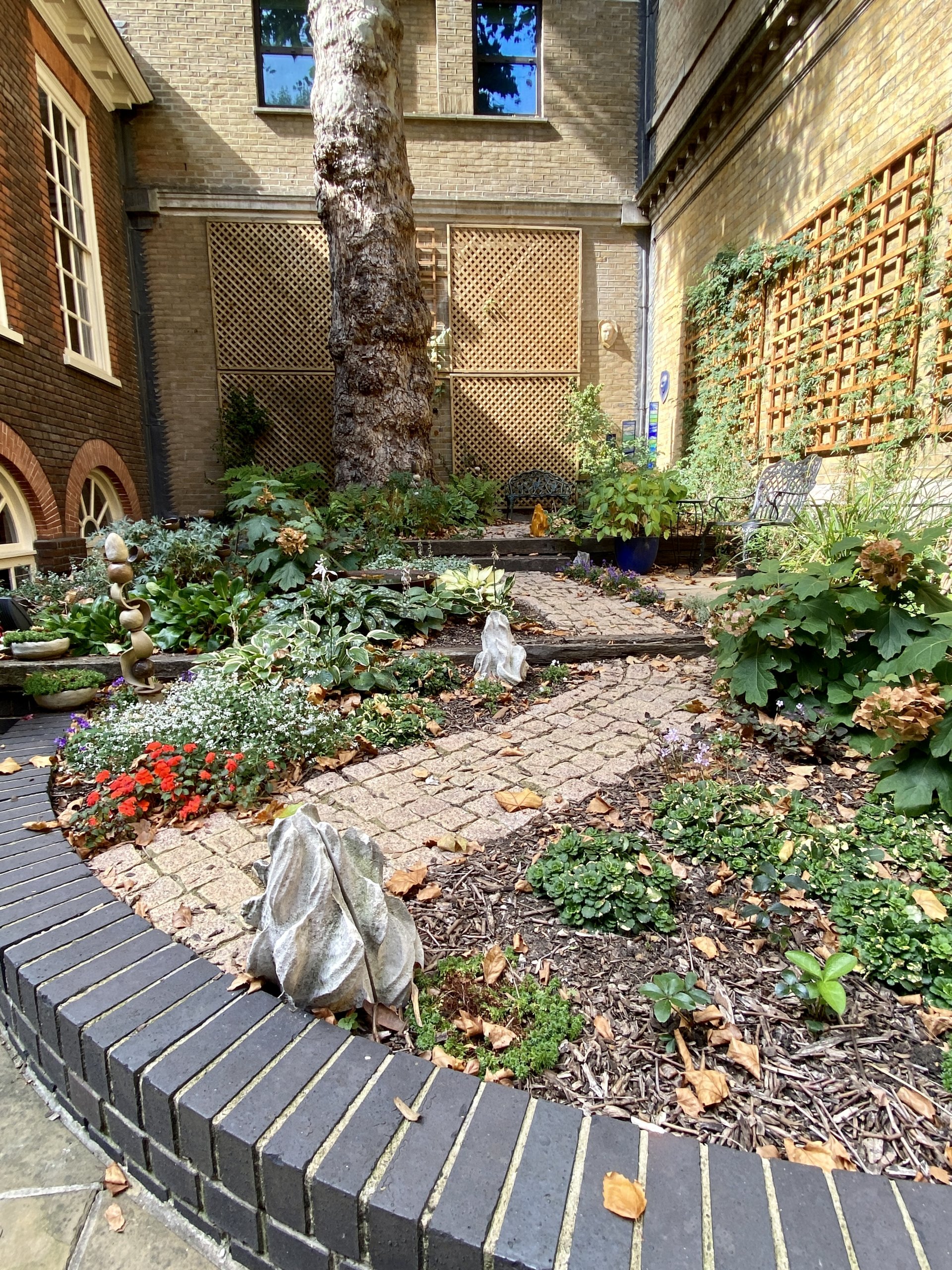 The Bishop of London is third in seniority in the Church of England after the archbishops of Canterbury and York. The role is also one of five senior bishops who sit as one of the 26 Lords Spiritual in the House of Lords.

Today The Old Deanery is the office of the 133rd Bishop of London, the Right Reverend and Right Honourable Dame Sarah Mullally DBE. She was installed into the role at St Paul’s Cathedral on 12 May 2018. She became the first female Dean of Her Majesty’s Chapels Royal, on 12 July 2019.

Today the Diocese of London covers 277 square miles of Greater London and comprises parishes, schools, chaplaincies, missional communities, and other organizations which are united by their common Christian faith. The Diocese is overseen by the Bishop of London, assisted by Area Bishops, Archdeacons, and senior staff, and administrated by the staff of the London Diocesan Fund. Its Cathedral is St Paul’s. 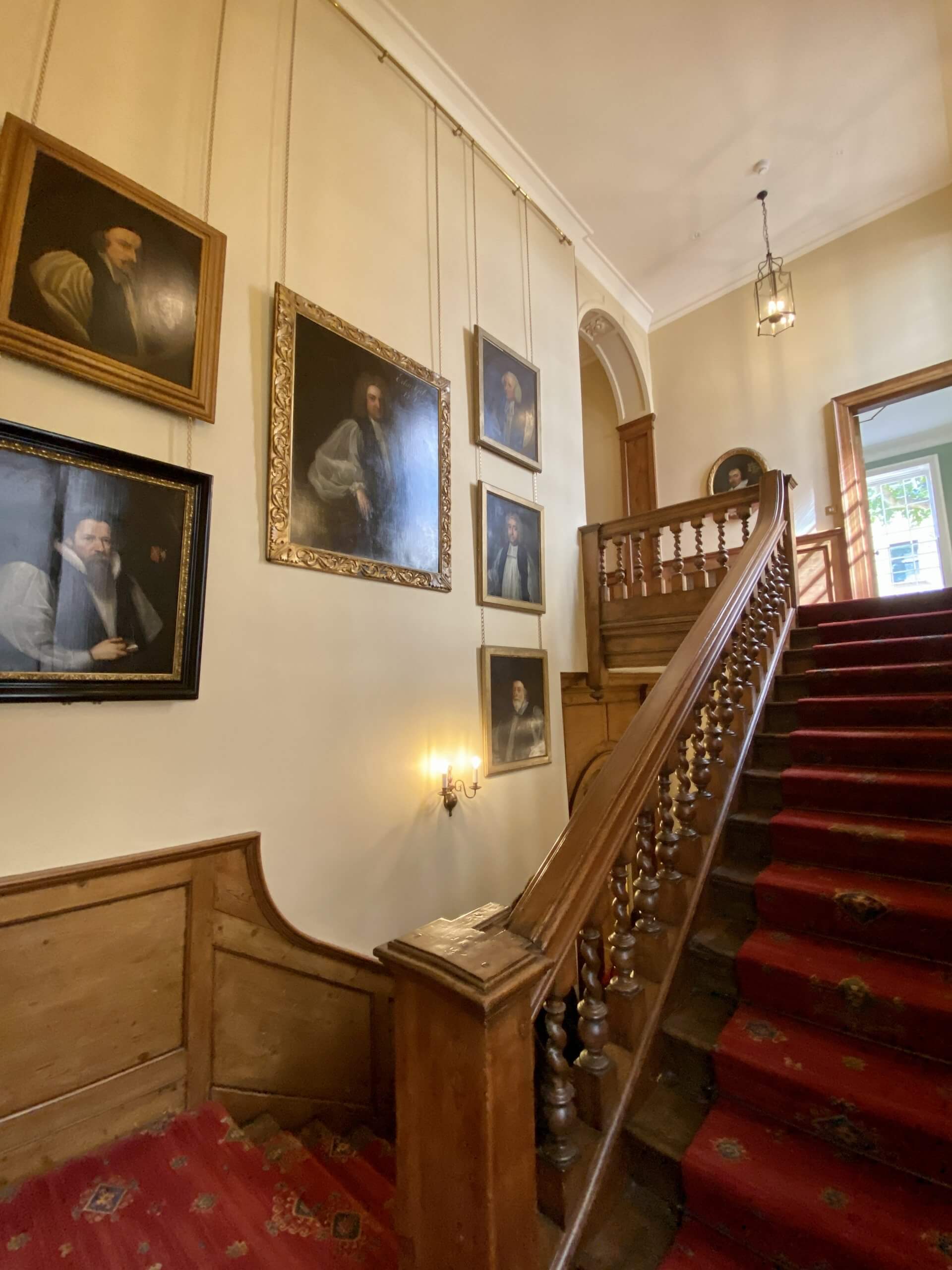