There’s a new exhibition at the National Portrait Gallery featuring one of the most influential British artists of the 20th century. David Hockney: Drawing from Life is the first major exhibition devoted to David Hockney’s drawings in over twenty years.

There are around 150 works from public and private collections on display. The exhibition traces the trajectory of his practice by revisiting five subjects over a period of six decades. The intimate portraits are rendered in pencil, pastel, ink and watercolour, using both traditional and non-traditional drawing equipment including coloured pencil, pen, the Polaroid camera and apps found on the iPhone and iPad.

The exhibition examines not only how drawing is fundamental to the artist’s distinctive way of observing the world around him, but also how it has often been a testing ground for ideas and modes of expression later played out in his paintings. Over the past fifty years, the artist’s experimentation with drawing has taken many different stylistic turns.

The exhibition features previously unseen early works, including sketchbooks from Hockney’s art school days in Bradford in the 1950s. Plus a selection of drawings from an intense period of self-scrutiny during the 1980s when the artist created a self-portrait every day over a period of two months.

Born in 1937 in Bradford, West Yorkshire, Hockney is now 82 years old and still a working artist. Many know and love his swimming pool paintings – Portrait of an Artist (Pool with Two Figures) sold at Christie’s auction house in New York City for $90 million in 2018 making it the most expensive work by a living artist sold at auction at that time.

Encouraged by his family, he went to Bradford School of Art. Below is a wonderful piece of student work as we can all remember art classes where we had to cut out piles of different coloured print from magazines to make a collage. But it also shows the early days of his journey of intense self-scrutiny.

I loved this self-portrait from 1954 (he would have been just 17 years old) as it reminded me of The Shopkeeper in the David McKee Mr Benn children’s books/TV series.

Woman with a Sewing Machine is also from 1954 and made me stop and think how young he was when he was producing artwork of this standard.

David Hockney enrolled at the Royal College of Art in London in 1959 at a time when drawing was compulsory. Rather than rebel against the art form, he embraced the learning and has used those skills throughout his career. He threw himself into life classes and even set himself the challenge of spending several weeks on two detailed drawings of a human skeleton he found at college.

Hockney was involved in the pop art movement in the 1960s. He moved to Los Angeles in 1964 and starting his series of swimming pool paintings. He lived in London, LA and Paris over the next decade.

In 1973, Hockney moved from London to Paris, a city he had always associated with Picasso. He lived and worked in a studio close to the Musée du Louvre and he visited the gallery regularly.

Always willing to try new technology, he used an iPad app to design a stained glass window at Westminster Abbey in 2018. (The Queen’s Window is located in the north transept of the Abbey and features a hawthorn blossom scene which is set in Yorkshire.)

In 2012, the artist made a digital self-portrait every day over the course of twenty days, exploring character types and facial expressions inspired by sketches by the Old Masters, such as Rembrandt.

Hockney is deaf and has used hearing aids since 1979.

The exhibition explores Hockney as a draughtsman from the 1950s to now, by focusing on his depictions of himself and a small group of sitters close to him:

Textile designer and his muse, Celia Birtwell. Celia first sat for him 50 years ago in Paris.

Master printer, Maurice Payne. Maurice has been friends and has collaborated with the artist since the mid-1960s.

Inspired by this exhibition, Hockney asked his friends to sit for him once more. The portraits can be seen in the last room.

Drawn in Los Angeles and Normandy in 2019, the three-quarter length portraits are fond evocations of time spent together. In the works, Hockney uses the walnut-brown coloured ink favoured by Rembrandt, achieving an uninterrupted continuous line.

After seeing the exhibition, I thought it was lovely to see this photo of the group of friends together in the gallery.

I have to say it is wonderful to stand in the rooms dedicated to each sitter to see them ageing and the artist’s techniques evolving.

His mother was always a willing subject for her son as seen in this pencil, ink and wash portrait in a sketchbook from his time at the Bradford School of Art. She was supportive of his desire to be an artist and would sit for him throughout his career.

After the artist’s father died, Hockney made two drawings of his mother in sepia ink and using reed pens as Van Gogh had done in his own portraits. Using a minimal line, Hockney conveys the sadness in his mather’s face as she looks directly at her son.

“Celia has a beautiful face, a very rare face with lots of things in it which appeal to me.
To me, she’s such a special person.”

Celia Birtwell is a fashion and interiors textile designer and muse to David Hockney. Her prints featured on Ossie Clark designs in the 1960s and 1970s when they were a couple. (Hockney met Ossie Clark when they went to the Royal College of Art together.) Hockney was the best man at their wedding.

Gregory and the artist met in London and had a decade-long intimate relationship from 1974 when they both lived in Paris.

Maurice encouraged Hockney to work in an innovative way. This 1998 etching used unusual tools such as a wire brush to create texture and volume.

The influence of Van Gogh can be seen in the mark-making as well as the full-frontal pose of the master printer.

Hockney has always made candid self-portraits in moments of introspection. You can see him playing with different facial expressions, influenced by Rembrandt’s self-portrait etchings.

The portrait drawings reveal his admiration for both the old masters and modern masters from Holbein to Matisse. While in the 1980s he used composite Polaroids to ‘draw with the camera’, as he described it, creating Cubist depictions of form which paid homage to Picasso. In more recent years, Hockney has returned to the distinctive mark-making of Rembrandt and Van Gogh.

In 1999, Hockney adopted another tool to capture the geography of the face. He saw an exhibition of portraits by the nineteenth-century French artist Jean Auguste Dominique Ingres at the National Gallery. He became convinced that Ingres had used a camera lucida – a tiny prism suspended on the end of a flexible metal rod, created for artists to use as a measuring device for drawing. He used this instrument to produce 250 portrait drawings.

After this project, Hockney did return to drawing portraits from direct observation, or ‘eyeballing’ as he calls it.

The artist visited the retrospective exhibition of Picasso’s work at the Tate Gallery in 1960, and the modern Master became a lifelong love. Following Picasso’s death in 1973, Hockney produced Artist and Model to describe an imaginary encounter with his hero. Hockney is the nude model being viewing by Picasso.

Self-portrait July 1986 (below), reflects Picasso’s stylistic influence in it’s neo Cubist style and playfulness. I loved the way a laser photocopier was used. Look at his striped shirt as it was placed directly onto the glass plate of the copier.

David Hockney’s parents were supportive of his art career. His father was an amateur artist, although he worked as a clerk, and his mother was a strong but quiet character.

His parents visited him in Paris in 1975 and sat for him to produce My Parents and Myself. Hockney wasn’t happy with it so it was never finished and that caused a family rift at the time.

When he returned to London, he produced another version in 1977 called My Parents which was completed and is owned by Tate Britain. But we are lucky to be able to see the 1975 unfinished painting on display here for the first time. (Hockney believed the painting had been destroyed so was surprised to find it in his studio when selecting artworks for this exhibition.) His mother’s chair isn’t quite there and her face hasn’t had the detail added. Hockney can be seen in the mirror between them and his father seems stiff and uncomfortable. It’s certainly interesting to compare to the Tate’s painting.

I thought this was a lovely exhibition. It felt like a privilege to be allowed to observe the intimate relationships these friends have formed. The rooms dedicated to each sitter are an absolute delight as you see the life changes of the sitters and the technique of the artist.

Portraits can make the subject vulnerable but by working with the same people over such a long period of time they understand each other.

The exhibition ends with the most recent portraits of the friends but it doesn’t feel like the end of the story as they all still have so much more to offer. This is just another chapter in that life journey.

While there is no doubt that David Hockney is an incredible artist, it was still mildly satisfying to note he never quite got the hands right in the portraits.

The National Portrait Gallery shop always has well-chosen merchandising for their special exhibitions. It was wonderful to see the pieces using designs by Celia Birtwell, CBE. The silk scarves were particularly lovely.

And the egg cups did make me smile. 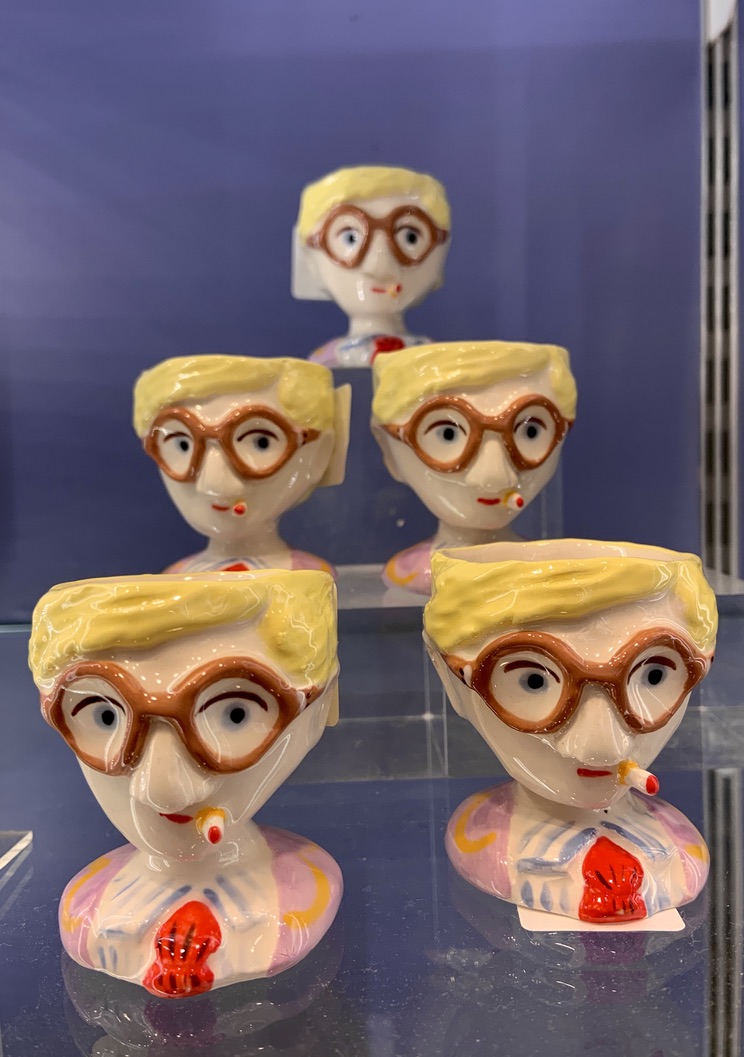 Tickets without donation: £18-£20. Under 12s are free and family tickets are also available.

£5 tickets for under 25s: Every Friday, the Gallery will make 500 £5 tickets available to anyone aged under 25. Tickets are subject to availability on a first-come, first-served basis and can be booked online or in person at the Gallery. Proof of age is required.

Running parallel with the NPG exhibition is a show at Annely Juda gallery, off Bond Street, of Hockney’s recent charcoal and crayon drawings – mainly of friends, plus one of Ed Sheeran from August 2018. It’s on from 28 February to 25 April 2020.