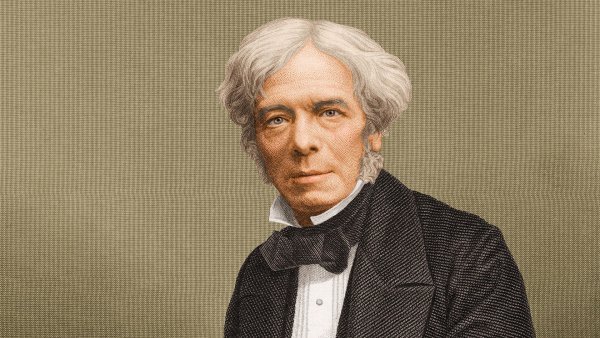 What we know today about electricity owes much to English scientist Michael Faraday.  While his focus of studies was in the fields of chemistry and physics, he is primarily responsible for principles governing electromagnetic induction, diamagnetism, and electrolysis.  These principles made it possible for transformers and generators to produce power, maglev trains to run at super speeds, and for batteries to fuel everything from flashlights to mobile phones.  Not so bad for a boy from South London, isn’t it?

Michael Faraday was born in the London hamlet of Newington Butts (now part of Southwark) on 22 September 1791.  He was the third child of James and Margaret Faraday, a blacksmith and a former servant, respectively.  As such, the family wasn’t particularly wealthy and soon moved from London to the home county of Surrey early in his life.  James was often too ill to work regularly which kept the family in poverty enough that Michael was once given a loaf of bread to eat and told it had to last him for the week.  The family also belonged to a sect of Christianity known as Sandemarians, and it was Michael’s religious beliefs that helped him through these hard years and informed much of his outlook on life and nature.

As was the case in such impoverished families, Faraday left school at the age of fourteen when he was old enough to work.  Fortunately for him, he was apprenticed to a local bookbinder, which enabled him to read as much as he liked and thus educated himself for the next seven years.  Coincidentally, according to the Encyclopedia Britannica, it was an article on electricity that first got him interested in science, leading him to conduct his own simple experiments in electricity and electrochemistry.  His genius was apparent even then as he was able to use lumber and old glass bottles to construct an electrostatic generator and a weak voltaic pile.

The real beginning of his career occurred when he attended lectures on chemistry by Sir Humphrey Davy at the Royal Institute of Great Britain in 1812.  Faraday took notes during the lectures and compiled them into a 300-page book he sent to Davy with a letter asking to become the chemist’s assistant.  Davy was taken by the young man and the next year after he injured his eyes in an accident with nitrogen trichloride, he took Faraday up on the offer.  During a European tour from 1813-1815, Faraday had to act as both Davy’s assistant and his valet and was so horribly treated by Davy’s wife that he nearly considered giving up science altogether.  However, the connections made during the tour with the continent’s brightest minds boosted his ideas, and he continued his work at the Royal Institute helping Davy and other scientists.

By the time his apprenticeship to Davy ended in 1820, Michael Faraday had proven to be a very capable chemist, developing the first known compound of carbon and chlorine as well as testifying as an expert witness in legal trials.  1821 proved to be a rather remarkable year for Faraday.  He published his work on electromagnetic rotation, which was the basis of the electromagnetic motor.  He was also promoted to Superintendent of House and Laboratory of the Royal Institution.  Lastly, on a more personal note, he married Sarah Barnard, a woman he met through the Sendemarian church.

The next couple of decades for Faraday produced a number of important scientific theories and advancements.  In 1825, he discovered Benzene from the oily residue left by London’s gaslights.  Six years later, he developed the principle of electromagnetic induction when he discovered that magnetism could make electricity flow along a current.  His career would see a laundry list of discoveries bearing his name, such as Faraday’s Law of Electrolysis, the Faraday Cage, the Faraday Effect, the Faraday-efficiency effect, and more.  He was elected a member of the Royal Society in 1824, helped to judge exhibits at the Great Exhibition of 1851, and was the first Fullerian Professor of Chemistry at the Royal Institution (a position created specifically for him).  Queen Victoria also offered him a nighthood, but he turned it down, preferring to remain “Mr. Faraday”.

When he died at age 75 in 1867, he was one of the most accomplished scientists in British history.  At the time, he was staying in special lodgings at Hampton Court Palace, which were given to him in recognition of his scientific contributions.  Foregoing burial in Westminster Abbey, he actually has a plaque there close to the tomb of Isaac Newton.  Instead, his burial site can be found in Highgate Cemetary, in the “dissenters” section reserved for non-Anglicans.