You are here: Home / Site News / Featured / The Other London Blitz – German Bombing of London During WWI 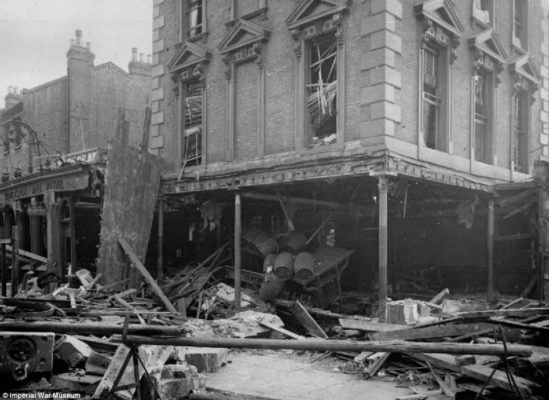 When most people think of the London Blitz now, they think of the Luftwaffe dropping bombs on the city in 1940 and 1941.  However, this was not the first time the city had faced such an attack from German forces.  Well before aircraft bombers existed, the German Army during WWI used a weapon that seems like something out of a steampunk fanfiction or a turn-of-the-century sci-fi novel—zeppelins.  Beginning in 1914, the Germans used these airships to first bomb Belgian cities.  Even though aviation was still in its infancy, the first bombing attacks on the UK came from Taube aeroplanes hitting British ports.  These bombing raids were little more than a nuisance to British forces, but what was to come would be much worse.

Britain declared war on Germany on 4 August 1914, but it would be nine months before the first attacks on London.  In fact, while the German military had wanted to attack London soon after hostilities began, Kaiser Wilhelm vetoed it due to his close familial ties to the British Royal Family and desire not to damage Britain’s cultural heritage.  However, pressure increased for an attack on the UK capital, and as more zeppelins became available, Wilhelm signed the order to bomb England in January 1915.  Five months later, the bombing would begin.

On 31 May 1915, the first zeppelins approached London, using the moonlight reflecting off the River Thames to guide them towards their target.  Wilhelm had ordered bombing east of the Tower of London, with the first incendiary device hitting Stoke Newington, then turning south to strike Dalston, Hoxton, Shoreditch, Spitalfields, Whitechapel, Stepney, Stratford, and Leytonstone.  Most damage from the fires created by the bombs were to private residences, though they also damaged the Shoreditch Empire Music Hall, the Great Eastern Railway’s Bishopsgate Goods Yard, and finally a church, synagogue, and warehouse storing Johnnie Walker whiskey in Whitechapel.

Before the creation of the Royal Air Force in 1918, both the British Army and the Royal Navy had their own air services, the Royal Flying Corps and the Royal Naval Air Service, respectively.  While the RFC was on the continent with the British Army, the RNAS was left to defend the capital.  London had sixteen guns defending it, but they were QF 1-pounder guns that weren’t able to reach the height at which the zeppelins were flying.  Bombing continued in September of that year when a three-ton bomb landed in the heart of the city’s financial district, killing 22 people and six children.  Civilians began to take shelter in the Underground and demand that the government do more to stop what they referred to as “baby killers.”

Anti-aircraft guns were moved from the front lines in Europe to be installed around the city along with massive searchlights.  The government also attempted massive blackouts to hinder the zeppelins’ navigation.  However, it wouldn’t be until technology caught up with the war effort in 1916 that real defences were in place to combat the airships.  Authorities also drained the lake in St. James Park to prevent its reflection from guiding the zeppelins towards Buckingham Palace.  By September 1916, new aircraft were ready that could reach the airships’ altitude and also fired explosive bullets to hit the zeppelins’ biggest weakness.

The zeppelins would try to fly at higher altitudes, but a combination of colder temperatures and oxygen deprivation made this impossible for their crews.  The Germans began to fly fewer bombing missions, then started to use Gotha bi-plane bombers that required the bombs to be dropped by hand.  Bombing continued through 1918, but with the British ability to fight back against the zeppelins and bi-planes, it became a much less effective strategy for the Germans.  As Britain and her allies began to prevail against the Central Powers of Germany and Austria-Hungary, the ships and planes stopped appearing over the city’s skies.

However, this was little comfort to some 700 people who had lost their lives to German bombs.  Germany’s goal to break British morale was not achieved, and it would not be when the bombs fell again roughly 20 years later.  This short span of time permitted the government and the people to recall the horrors of the first blitz and take precautions, even though the results would be even worse than the first time.  On both occasions, though, Britain would show its strength, refusing to give into fear.