You are here: Home / Site News / Featured / The First Blitz: London During World War I 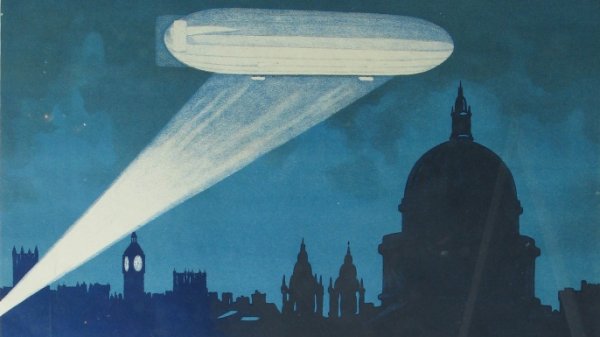 Last year celebrated the centennial of the outbreak of World War I. When the assassination of Archduke Franz Ferdinand of Austria led to that country declaring war against Serbia, the network of alliances led Germany to declare war on them as well, then on Belgium when the latter wouldn’t let Germany cross its borders. Great Britain, as Belgium’s ally, then declared war on Germany on 4 August. Strangely enough, celebrations broke out in the streets of London with the announcement.

However, the joyous feelings of the war in Britain and across Europe would be short-lived. At the time, many people across Europe believed that the war would be over by Christmas. As trench warfare took hold on the mainland, it became readily apparent that the war was going to draw on for a long time. While many remember the London Blitz of World War II, it wasn’t the first time the Germans had bombed the city. A few months into the war, German zeppelins appeared over the city’s skies, having followed the reflection of the Thames.

31 May 1915 saw 90 incendiary bombs and 30 grenades tear through the peace that Londoners had enjoyed. By dawn, the bombs had killed seven, wounded thirty-five, and caused £18,000 in property damage. In the months that followed, the city would see another fifty bombing raids that would result in approximately 5,000 bombs dropped on the city that killed almost 700 people and injured roughly 2,000. It was during these raids that Londoners first began to use the London Underground as bomb shelters.

Situated several hundred metres in the air, British aircraft did not yet have the ability to rise high enough to combat them, leaving the Germans practically free to drop bombs at their leisure. Initial bombing raids remained on the outside of the city to avoid hitting Kaiser Wilhelm’s royal relatives. However, the raids decreased as the number of anti-aircraft guns and air patrols increased, as well as an advance in technology that permitted British planes to reach the same height and fire explosive bullets that could tear through the zeppelins.

During the first year, two million men joined the Royal Army and Royal Navy. The initial swell of patriotism was great as Britain asked for 100,000 volunteers and got 750,000. In London, those men who did not join the military were treated as cowards. People would hand them white feathers and they would be refused service in pubs and shops. However, the horrors of the war started to become apparent to Londoners as trains came into the city carrying the wounded. With them came the doom and gloom of war and the news that many sons, brothers, husbands, and lovers would not be returning.

At home, the Defence of the Realm Act introduced new rules that permitted the government to take over any factory or workshop to aid the war effort. Strict curfews and restrictions on movement were introduced. As the reality of war set in and opposition to it increased, the government heavily censored any discussion of the war, and in addition to discouraging talk considering anti-patriotic, any discussion of military matters in public could be deemed a serious offence. Anyone “causing alarm” could be arrested.

Food rationing became a problem in 1918 after a German u-boat blockade made it difficult to get necessaries supplies at home, with sugar and meat being the first two items to be rationed. The blockade also led to inflation of food prices, making it even more difficult for poorer families to survive. Another effect of the blockade (and the war as a whole) was increased xenophobia in London. The sinking of the Lusitania, with twenty Londoners aboard, raised the level of anti-German sentiment, and all but two Metropolitan Police districts in the city saw some kind of rioting.

On the positive side, the war saw an increase in the role of women in Britain, as men going off to war offered many new job opportunities in civil service, factories, docklands, farms, the Post Office, and more. While 3.2 million women were employed in industry before the war broke out, the number increased to 4.8 million by 1918, of which 40% were married. This did little to curb old-fashioned notions, as some felt women were being de-feminized by working and their male cohorts feared the competition for jobs. Women had to endure stricter regulations than men and never achieved anything close to equal pay.

On the other hand, one major advancement in women’s rights was achieved as the appreciation for their efforts at home and continuous lobbying from suffragettes led to the passage of the Representation of the People Act that gave the vote to 9 million women across Britain. However, the closing of the war and returning of men meant that women were expecting to return to homes and the more menial jobs they’d held before the war. However, in the same month as the Armistice, the Eligibility of Women Act was passed, meaning that women could be elected to Parliament for the first time.

Despite the war ending on 11 November 1918 with the Armistice, recovery took a significant time. Soldiers returned to find a London scarred by bombs, businesses destroyed, and unemployment on the rise. Spending was cut to prevent inflation, which meant that reform programmes that would have brought much-needing housing and healthcare were cut. Eventually, life in London normalised, though things were never quite the same. And little more than twenty years later, the city would see war return to it again.