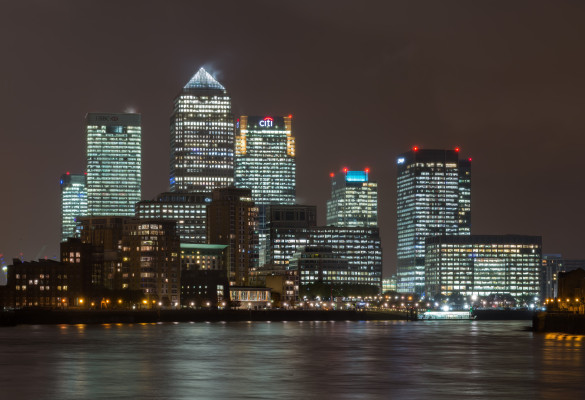 A major financial center of London, it was once one of the busiest docks in the city. The docks’ usage saw a decline from the 1960s to the 1980s, at which time developers began converting the area to offices and retail. The first building constructed as part of the new development was One Canada Square, completed in 1991. Now a prominent feature of London, it sees more life from citizens and tourists than it ever has before. So what interesting facts can we discover about the busiest commercial locale in the Greater London area?

The average salary of someone working in Canary Wharf is £100,000.

Despite the decline in the docks, not everyone was in favor of the new development at the end of the 80s. Locals were concerned there would be no benefit to the local area and that buildings like One Canada Square would block television signals. Companies were also reluctant to relocate to such a remote area that lacked a tube station as well as shopping centers and restaurants. The recession of the early 90s didn’t help matters, but an international development consortium purchased the area and worked to revive it and by 1999, a Jubilee line extension out to the Millennium Dome ensured there would be an Underground stop, followed shortly by a shopping mall, restaurants, and tons of new employees to the area.

Canary Wharf has roughly 14 million square feet of office and retail space. The area also employs approximately 105,000 workers. Of course, just because the docks see less use than they did doesn’t mean that the maritime industry is completely gone, 1,000 ships still pass through the docks each month.

The name “Canary Wharf” actually comes from the No. 32 berth of the West Wood Quay of the Import Dock. This dock was constructed in 1936 primarily for the fruit trade from the Mediterranean and Canary Islands. At the request of Fruit Lines, Ltd., the company that used the dock, it was given this name.

The tube station constructed in 1999 is so large that you can lay One Canada Square inside it. It has at least 20 escalators and sees as many passengers as 50,000 daily and 40 million per year. With these figures, it is easily the second busiest station in London.

Replacing a Real Tree with a Fake

Well, maybe not a fake, but an interesting art installation went up in place of a real tree located in Canary Wharf. French artist Pierre Vivant’s Traffic Light Tree was installed in 1998 to replace a dying tree and features 75 different working traffic lights. It was located originally on a roundabout at the junction of Heron Quay, Marsh Wall, and Westferry Road but was relocated in 2013 to the Trafalgar War roundabout due to reconstruction. What’s more, the area has about 100 art events per year and features over 60 works of public art from 45 artists.

The redevelopment of Canary Wharf also brought with it a cleaning to the docks that has invited many aquatic species back to this part of the Thames. A mixture of fresh and saltwater fish inhabit the area, including flounder, plaice, bream, and rudd, as well as a number of aquatic birds that feed on them. The word is that there’s even a seal that hangs out on the North Docks.

Everyone Deserves a Quality Store

Canary Wharf is home to the largest Waitrose grocery store in the UK and sees 80,000 customers per week. The wine cellar on the first floor has 2,000 different wines from 20 countries, with prices that range from £3.99 to a £425 bottle of Chateau Latour.

Canary Wharf Summer Screens are erected in the area ever year from June to August, showing everything from sporting events to live opera.