You are here: Home / Londonism / London Maps: Intriguing Map of London Shows Just How Much Green Space it Has – The Amount Will Surprise You 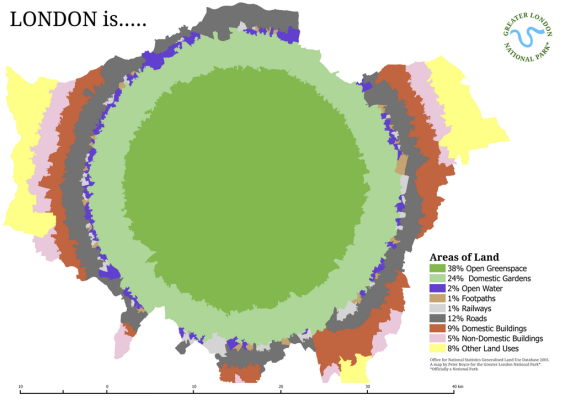 London is a very green city – by that I mean it has lots of parks and open spaces. But I never realized how much until I saw this map put out by the Greater London National Park – which is seeking to turn London into a national park to better manage its green spaces. 62% of London is either open greenspace or gardens.

London is an incredibly diverse place. 8.3 million humans speaking 300 languages share the city with 13,000 wild species as well as lots of cats and dogs. You may be excused of thinking there was not much space for all these Londoners, but 60% of London is open land and 47% of Greater London is green. As well as the 3,000 parks, 142 local nature reserves, 36 sites of special scientific interest, 4 UNESCO World Heritage Sites and 2 National Nature Reserves within the city’s limits, there are 3.8 million private gardens. For its size, London is one of the very greenest cities in the world – something to celebrate …

The Greater London National Park would be a new kind park, a ‘National Park City’ that would aim to conserve London’s awesome ability to be dynamic, innovate and evolve. The Park’s leadership role would be to inform and inspire best practice, help better to co-ordinate and promote London’s biodiversity and recreational opportunities.

A Greater London National Park is an idea that thousands of us could get behind to improve our communities, wildlife and habitats.

It’s certainly an intriguing idea but I doubt London resident want to add yet another layer of governance on their city.

While bits of London are pretty high density one thing that’s so amazing about it is when you see it from the air – how green it is. Just another thing that makes London the great city that it is.