You are here: Home / Guides / Top Ten London: Top 10 Things to See and Do in Fitzrovia 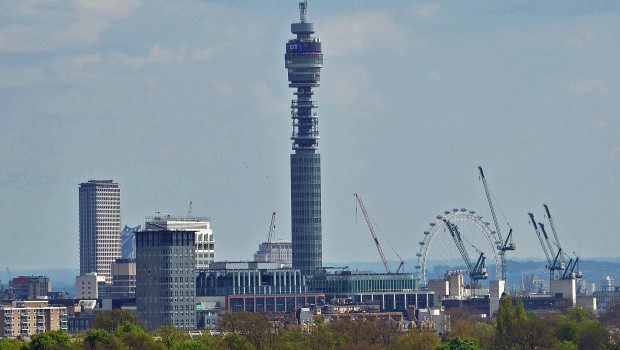 Fitzrovia is one of those districts in London that seems to touch everyone important.  Partly in Westminster and Partly in Camden, it also touches the West End and is a prime example of a mixed-use area of the city.  As such, it has residences, shops, businesses, bars, restaurants, and plenty of attractions for everyone.  No matter what you’re interested in seeing, you can find it in this central part of the city.  We’ve identified our top ten places and things to see in Fitzrovia below, and you can let us know your own favorite hot spots in the comments.

Banksy, the mysterious artist whose murals can be found throughout the city, has certainly left his mark on Fitzrovia.  One of his stenciled rats has existed on a wall on Clipstone Street which was covered over with Plexiglas to keep it from being damaged or painted over by the Westminster Council.  If you get lucky, you might find another piece of art somewhere in the area.

The New Broadcasting House is just next door to Fitzrovia in Marylebone, and while tours aren’t really on the menu, you can still bask in the history of the building that was the BBC’s first purpose-built broadcasting studio in the golden days of radio.  At the very least, if tours aren’t still available, you can attempt to get tickets to a show being filmed there.

Nearby is the Royal Institute of British Architects, which may sound like a snoozefest but is actually a very interesting museum and library.  If you want to know more about architecture in the United Kingdom, the RIBA offers tours of its historic building as well as letting members of the public access its library collection highlighting the best designs around the world.

One of London’s top cocktail bars, the Punch Room in the London Edition hotel is a must-visit if you love spirits.  The reservations-only bar has classic wood paneling and comfortable lounge seats, but that’s not really the reason why you want to go.  As the name might suggest, the punch bowl is a specialty of the house, and they offer ten different choices as well as other mixed drinks and cocktails.

It is believed that Fitzrovia was named for the Fitzroy Tavern, which has been located in the neighborhood since 1883 when it began as a coffeehouse.  The bar has had some pretty famous patrons over the years from poet Dylan Thomas to infamous occultist Aleister Crowley.  It has a very traditional interior along with a good selection of food and ales.  If you’re a Doctor Who fan, the pub has been a gathering place for Whovians since 1984.

One of those wild and crazy spots in London, the Grant Museum of Zoology and Comparative Anatomy has over 67,000 specimens of animals so you can study their anatomy in-depth.  The collection is so large it features any number of strange and unique exhibits, bound to fascinate even the most morbid of curiosities.

Being so close to the West End, the theater district manages to bleed over into Fitzrovia thanks to the Dominion Theater.  A Grade II listed structure that’s been bringing culture to Fitzrovia since 1929, the Dominion Theater is most recently known for being the home of the Queen musical We Will Rock You from 2002 to 2014.  Currently, the theater is home to a different rocker’s musical—Meatloaf’s Bat Out of Hell.

Having been here myself, I can tell you that this museum close to the British Museum is worth the visit if you’re in the area.  The museum is dedicated to the types of cartoons that grace the newspaper pages as far back as the 18th Century when politically-charged cartoons took a comedic aim at figures in power.  The museum shows off the evolution of how these cartoons and comics have developed through time and their power to influence us.

Perhaps the only major landmark in London to be protected by the Official Secrets Act, British Telecom Tower was a sophisticated radio tower when it opened in the 1960s.  Many of the radio dishes and antennas have been removed since then as our communications needs have changed, but the building still serves as an iconic piece of the London skyline.  Closed to the public since the 1980s, it does open occasionally as a ticketed event, so be sure to keep an eye out for one of these special Open House weekends and visit the most iconic place in Fitzrovia.