You are here: Home / Columns / Laura's London / Voice & Vote – Women’s Place in Parliament Exhibition at the Palace of Westminster

I hope you saw The London Annual 2018 as I had a feature in the magazine about Vote 100 marking the centenary of the Representation of the People Act 1918 which gave most men and some women the vote for the first time. 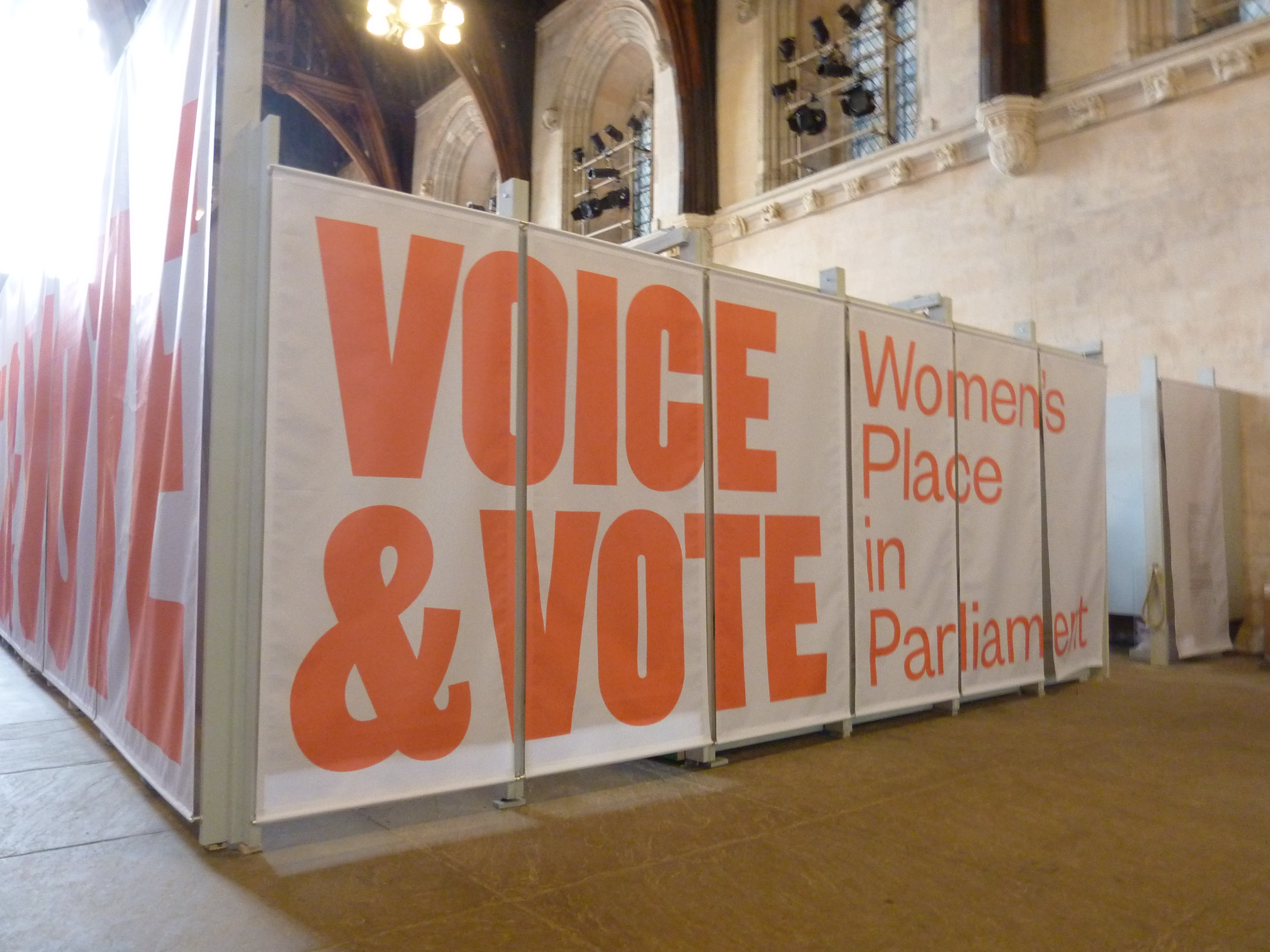 The (often rare and previously unseen) historic exhibits on display here tell the hidden “her-story” of the UK Parliament: the campaigning, the protests and the achievements. It also examines where we are today and how you can make change happen.

The exhibition has three immersive historical spaces, recreating lost spaces of the Palace of Westminster, and one current for you to better experience a women’s place in Parliament.

Two hundred years ago, women, although banned from the public galleries, found an attic space where they could see and hear the debates.

The octagonal loft space was built above the House of Commons Chamber to offer ventilation, and the women found they could see through the ventilation holes.

It started out quite informally and some used the space for socialising. But it soon became more organised as many wanted to be more informed and politically engaged. Some went on to campaign on issues that concerned them, such as the abolition of the slave trade.

To find out how it might have felt to watch debates from this all-female space you can put your head in the cut-outs on the side of this recreation. It has been acoustically modeled by the University of York so you can feel more ‘immersed.’ 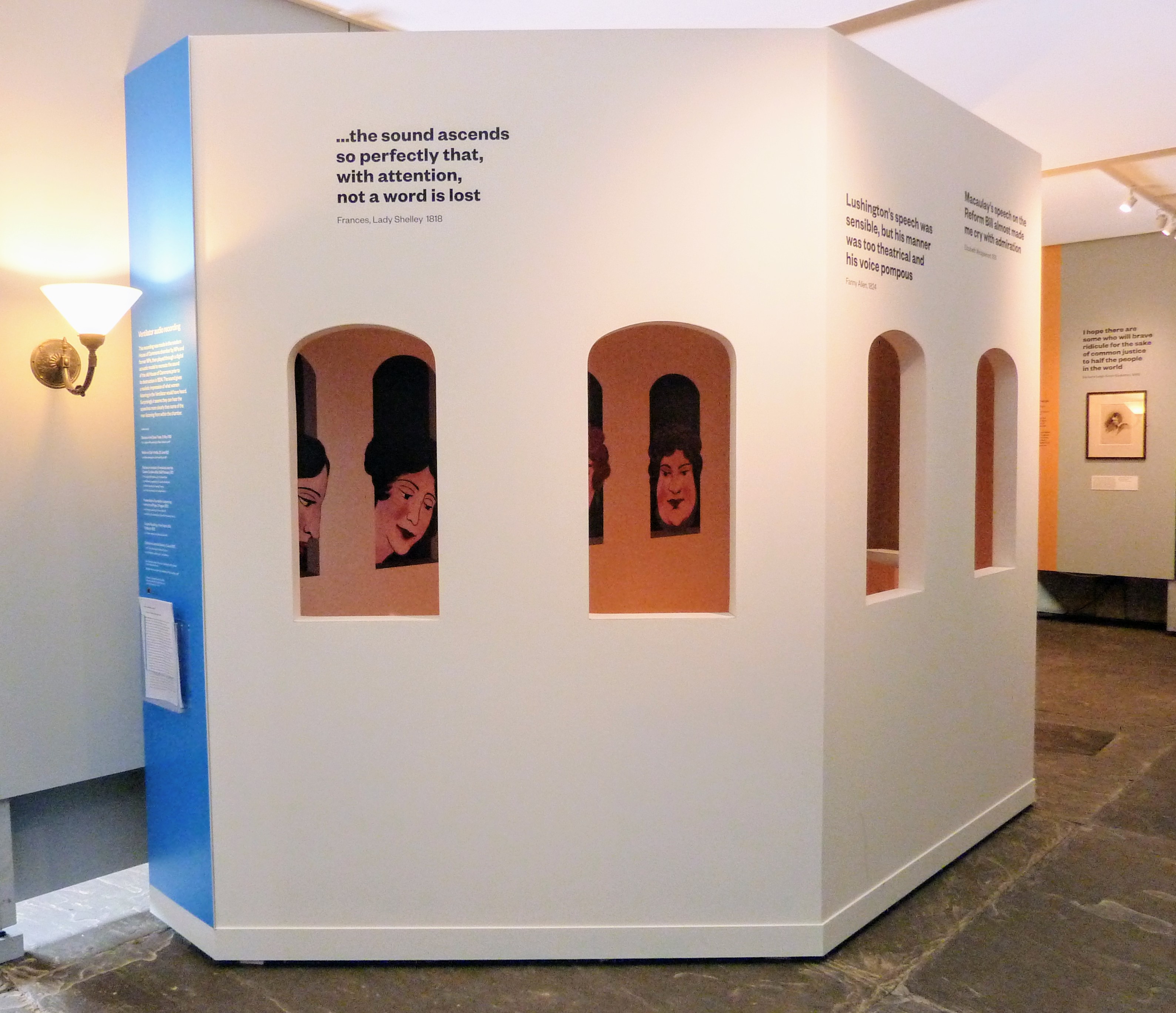 After the 1834 fire that destroyed the medieval Houses of Parliament, it was rebuilt as the Gothic structure we see today. The new House of Commons included a Ladies’ Gallery that allowed women to view the Chamber from high up above the Speaker’s Chair.

While this was an improvement, the gallery had heavy metal grilles over the windows, deliberately placed there to stop MPs seeing the women.

The grilles restricted women’s views, and the Ladies’ Gallery was hot and stuffy. It soon became known as “The Cage.”

The height, together with the grilles, made it very difficult for women to see and hear what was happening. Millicent Fawcett, who went on to be the President is the National Union of Women’s Suffrage Societies, was married to Henry Fawcett MP and she acted as secretary to her blind husband. She wrote that the Ladies’ Gallery was “a grand place for headaches”.

We now have the chance to take a seat and try to look through a replica grille for ourselves. There are recordings of debates so you can see how well you could follow from inside The Cage. 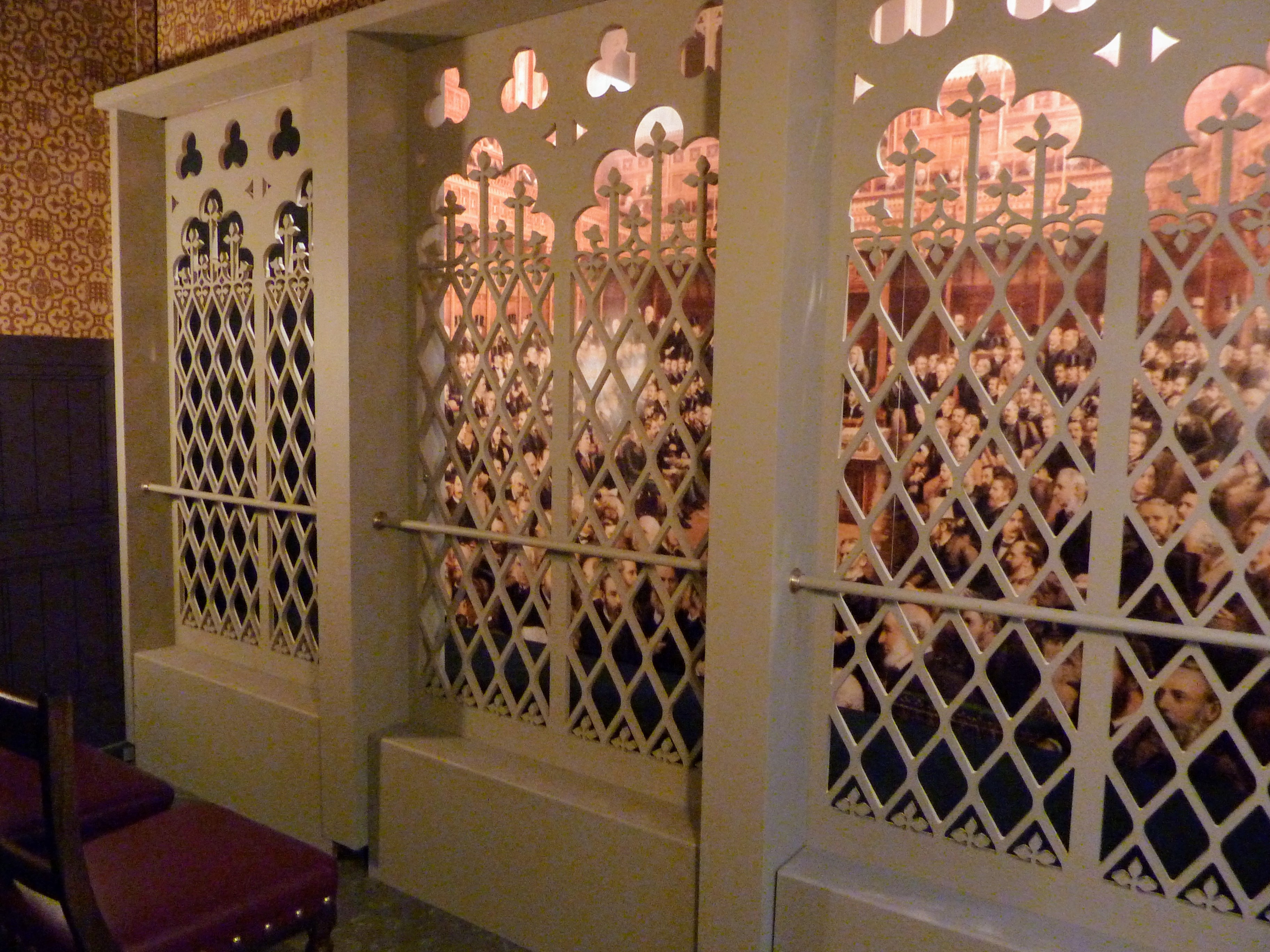 From 1918, women could stand for Parliament for the first time. In fact, Constance Markievicz was elected in 1918, but she never took her seat as she represented left-wing Irish republican political party, Sinn Féin.

Today we may hope that our road to freedom will be a peaceful and bloodless one; I need hardly assure you that it will be an honourable one. I will never take an oath of allegiance to the power I meant to overthrow.

Nancy Astor was the first female MP to take her seat in 1919. Most male MPs didn’t have an office at the Houses of Parliament as they often used their gentlemen’s clubs for business meetings. As this wasn’t an option for Astor an office called the Lady Members’ Room was provided but it was poorly furnished and became increasingly overcrowded as more women were elected as MPs. They had to share the space, which became known as “The Tomb” despite their differing politics.

Once the few desks provided were all taken, women MPs had to sit on the floor to do their paperwork and hold meetings in corridors.

This recreation has historic furniture from the Houses of Parliament collection, so you try the “unsympathetic sofas” or sit at one of the three desks. Lift the telephone, and you can hear a reading of a 1928 description of The Tomb by Ellen Wilkinson, MP, when there were eight female MPs trying to use the small room. 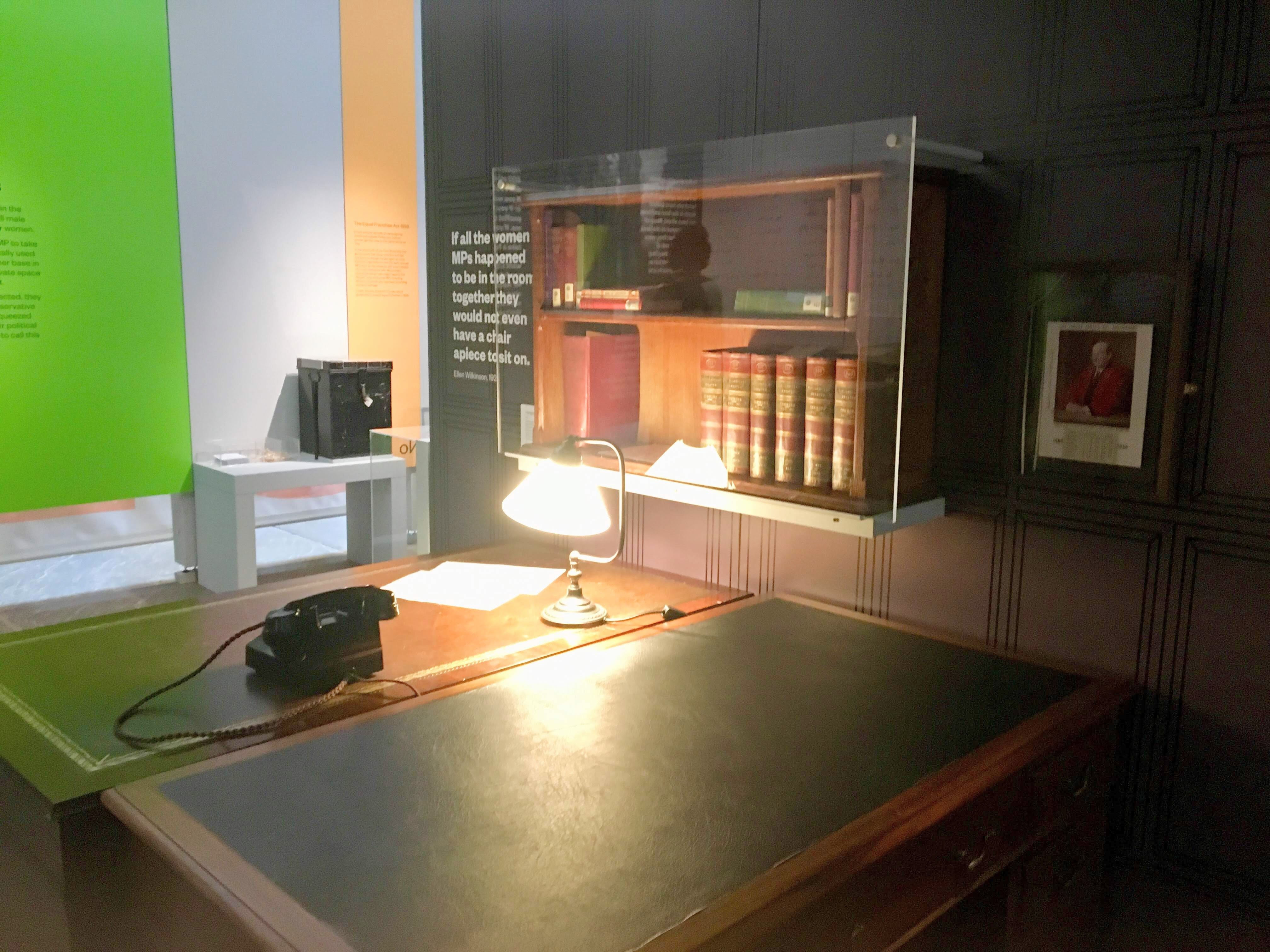 The final part of the exhibition looks at the current situation. There are TV screens to listen to vox pops of female MPs discussing issues important to them and a wall with the names of all 491 female MPs to date.

You can then take a seat in ‘The Chamber’ and listen to oral history recordings from female MPs and members of the House of Lords today.

Women have now occupied the highest positions in Parliament, including Betty Boothroyd, the first, and only (so far) woman Speaker and Baroness Hayman, the first Lord Speaker in the House of Lords. And, of course, the current Prime Minister, Theresa May.

Millicent Fawcett and the Suffragists

Just to be clear, not all women’s suffrage campaigners were ‘suffragettes.’ That name was coined by the press to be derogatory towards the protesters who used militant actions.

Before things escalated to violence, there were the law-abiding suffragists that became formally organized from 1867. They wrote letters and collected petitions and always intended to use their words and intelligence to raise the awareness of the injustice.

The largest non-militant suffrage organization was the National Union of Women’s Suffrage Societies. It was founded in 1898, and Millicent Fawcett became its President from 1907. 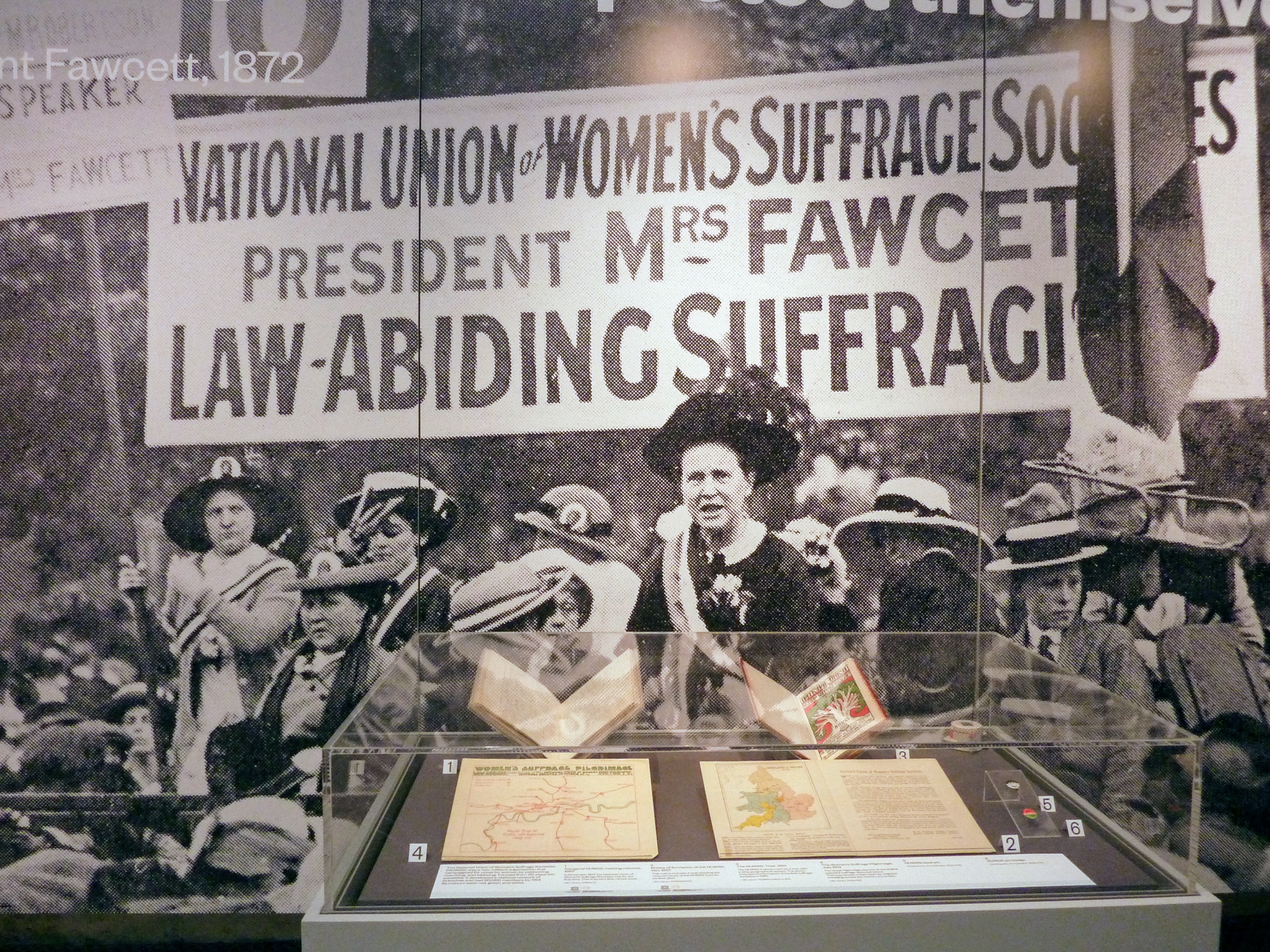 When we see black and white images (like the one above), we can often presume the three colors the women are wearing are the green, white and purple associated with the suffragettes. But the NUWSS’s colors were actually red, white and green.

It shouldn’t be forgotten that there was a sizeable anti-suffrage movement too. This included both men and women and these postcards were made to promote their views.

An incredible find has been this very rare doll depicting a suffragette as a shouting harridan, wearing a masculine tie and pork pie hat. The handbag suggests a weight that might be used to smash windows.

As with the postcards, negative representations like this doll were bought by both pro-and anti-suffrage supporters, who may simply have found them amusing.

Emmeline Pankhurst and the Suffragettes

In 1903, Emmeline Pankhurst and her daughters Christabel, Sylvia and Adela founded the Women’s Social and Political Union (WSPU). Along with many other women, they campaigned visibly, protested loudly and broke the law.

We are not here because we are law-breakers; we are here in our efforts to become law-makers. 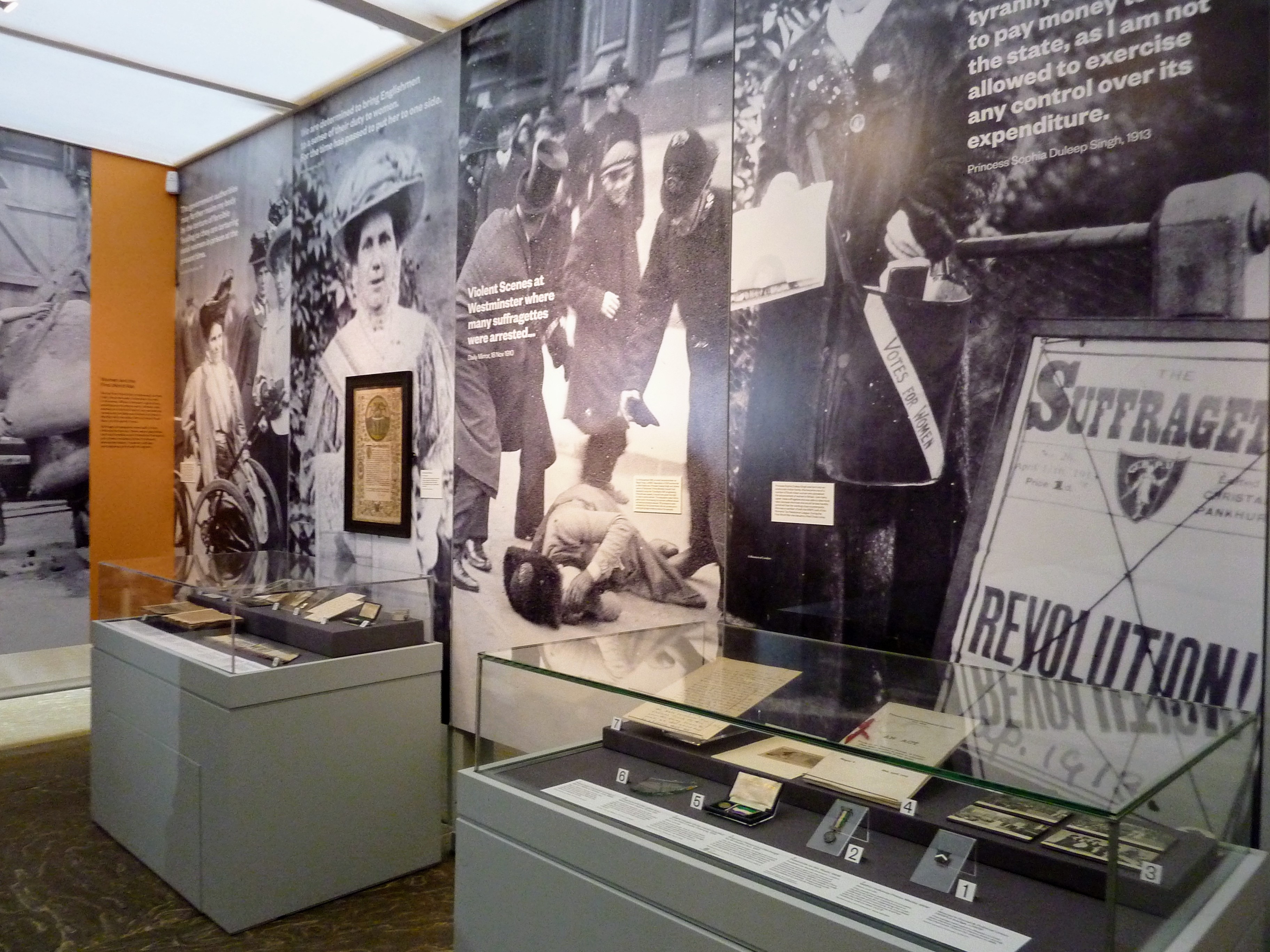 In October 1908, Muriel Matters and Helen Fox from the Women’s Freedom League (a spin-off group from the WSPU) lowered a banner from the Ladies’ Gallery in the House of Commons and chained themselves to the Ladies’ Gallery’s heavy metal grilles. The authorities had to remove the grilles with the women still attached, and the locks were filed off in the Committee Room.

One of the metal grilles is on display here as is the proclamation banner which is ridiculously small (less than the size of a tea towel).

Also on display are the bolt cutters needed to cut through chains when suffragettes attached themselves to railings inside and outside of the Houses of Parliament.

There is a fascinating display of items from Alice Hawkins’ family to highlight the role of lesser-known working class suffragettes.

Another suffragette who is more well-known is Emily Wilding Davison as she died in front of the king’s horse at Epsom Derby in 1913.

She hid in a broom cupboard at the Houses of Parliament on census night in April 1911 so she could give Parliament as her address on the census form. There’s a recreation of the broom cupboard here so you can step inside. 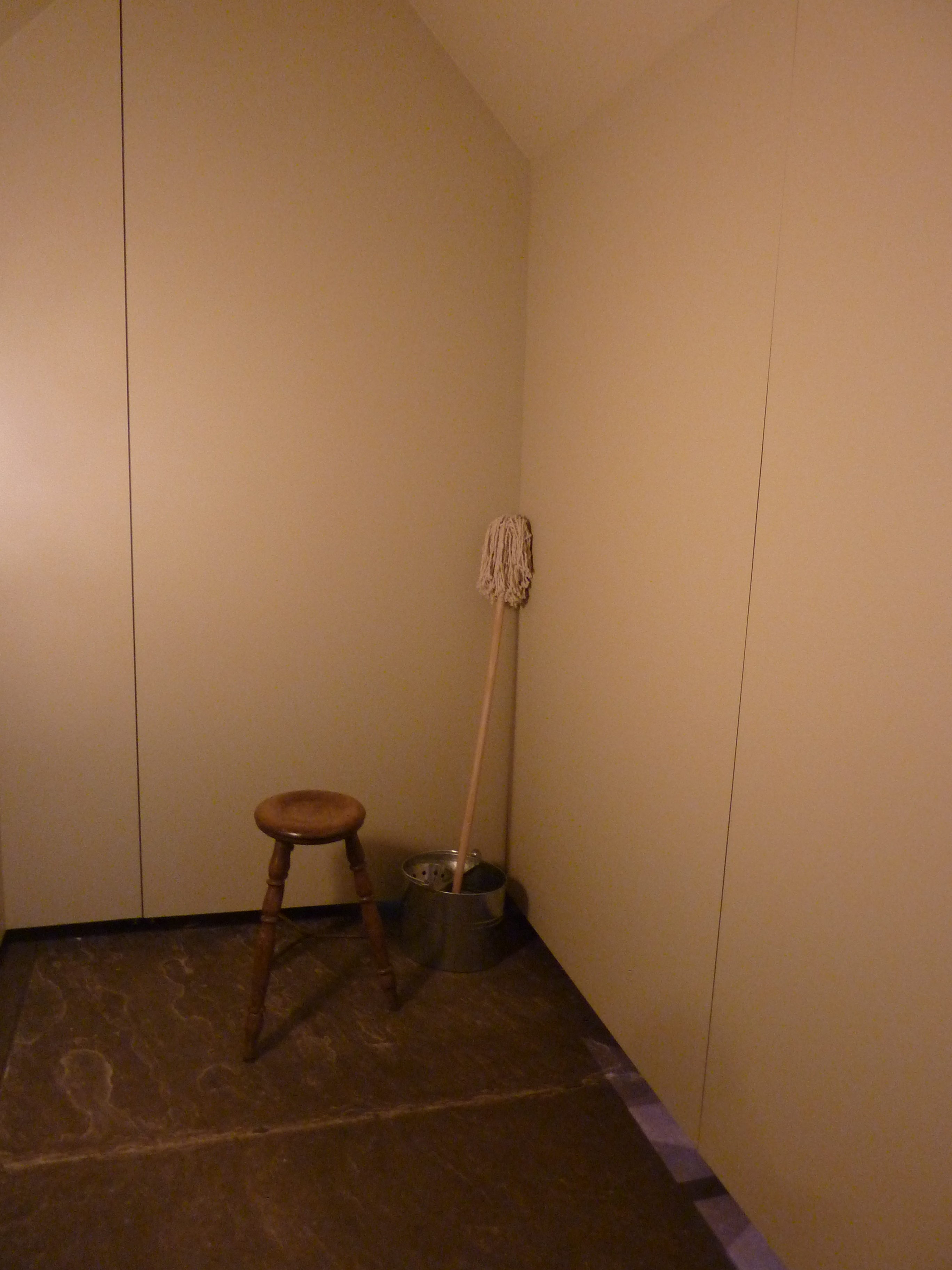 There’s a large flow chart on the wall so you can find out if you were able to vote when the Representation of the People Act 1918 was passed 100 years ago. Once you’ve worked it out, you can add a ball to the yes or no box.

About halfway through the exhibition, there is an easy to miss display cabinet with three immensely important Acts of Parliament.

These three were so life-changing for British women today I think there should be neon arrows pointing to them, so they are not missed. 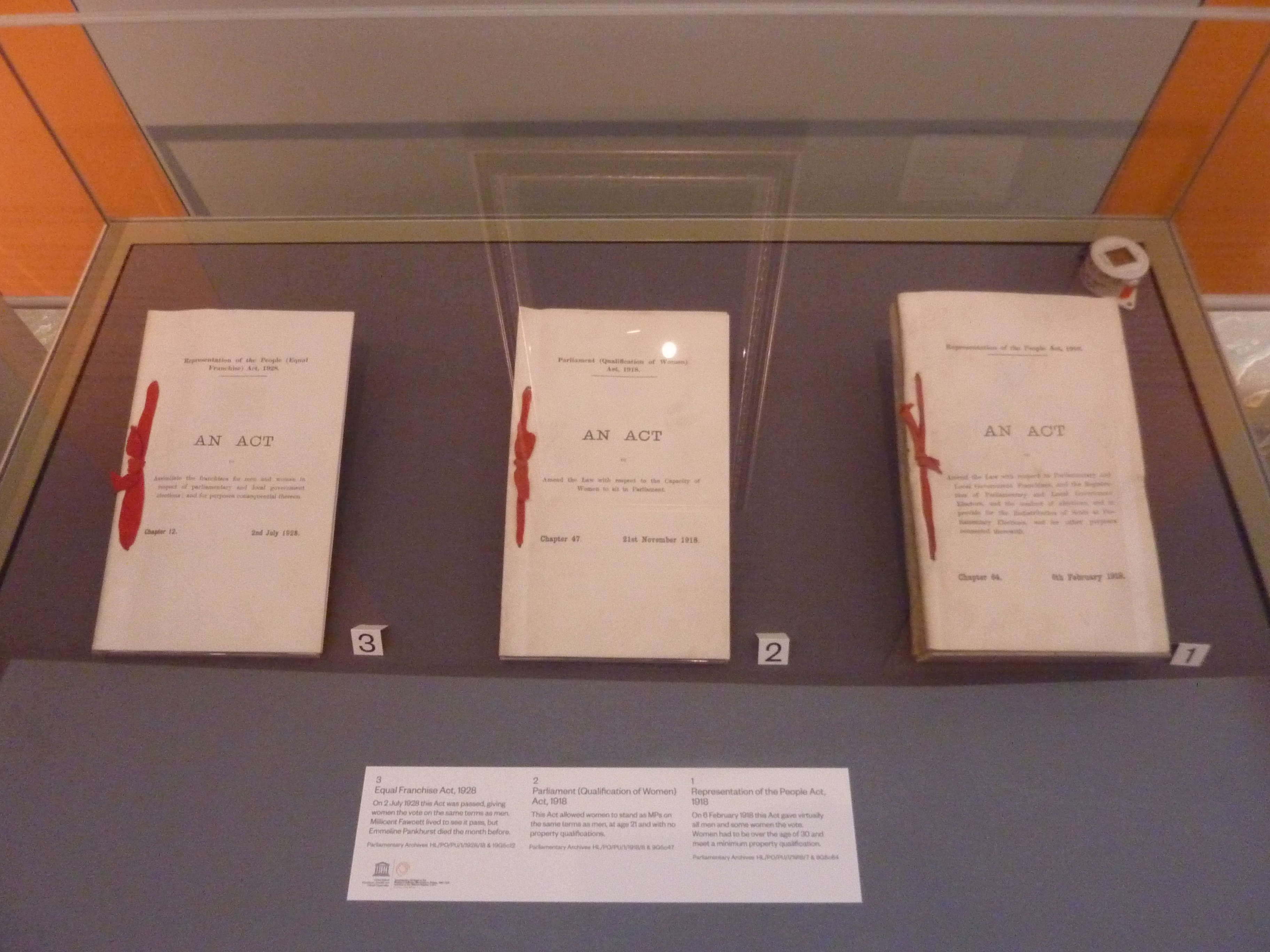 Times: First timed entry is 9 am (except Mondays 10 am). Last entry is normally 5.30pm when the exhibition closes at 6 pm.

Cost: Free although as capacity is limited advance booking is essential. Exhibition tickets, which provide access to Westminster Hall only, can be booked online, by calling +44 (0)20 7219 4114 or in person from the Ticket Office at the front of Portcullis House.

On most days between 26 July and 1 September, you can combine a visit to the exhibition with a tour of the Houses of Parliament.

Don’t forget to stop by the dedicated gift shop which has this rather lovely ‘suffraduck.’ I couldn’t resist. 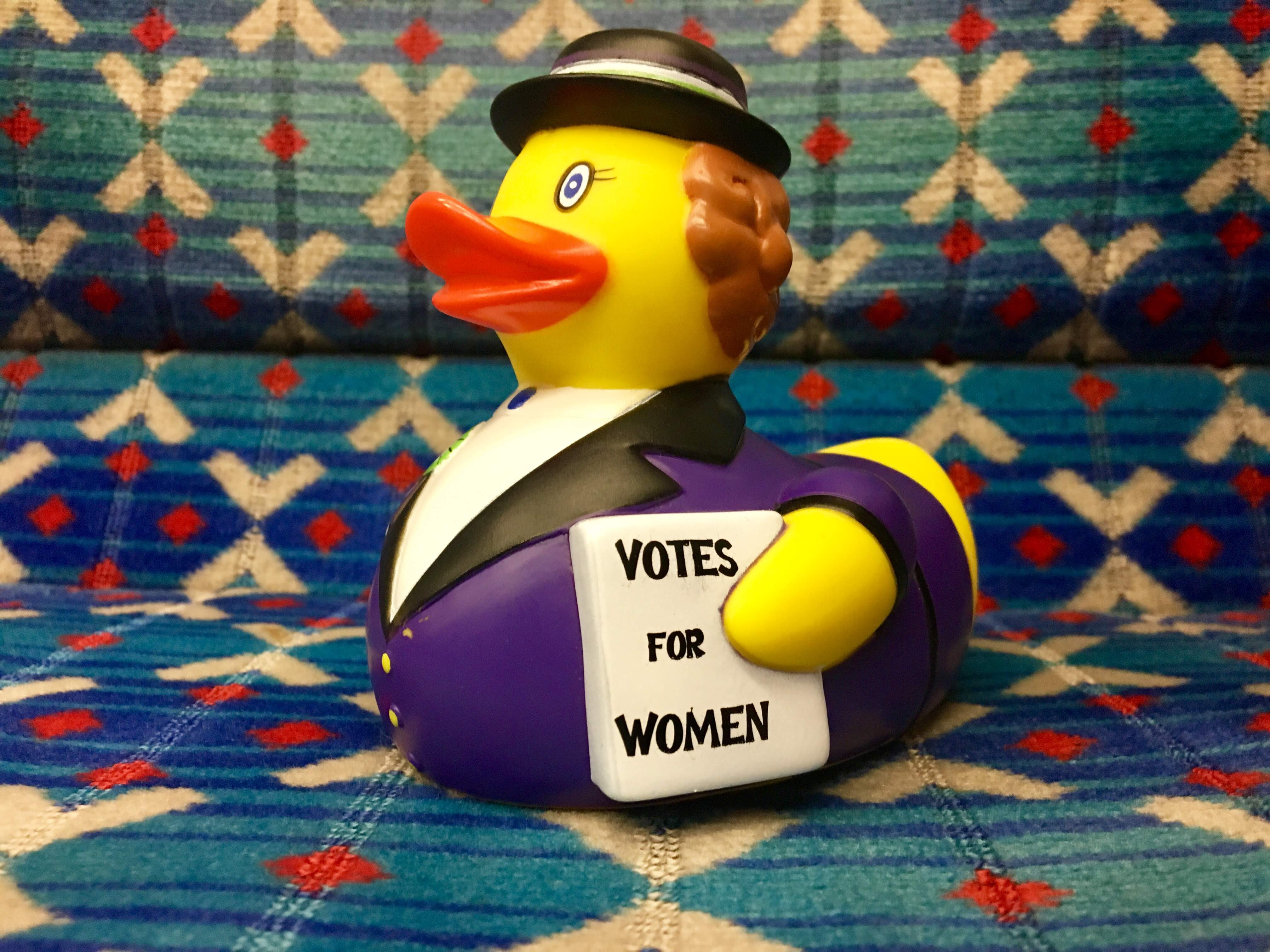