This major new exhibition reveals the scale of the capital’s ‘hidden’ international port. London: Port City runs from 22 October 2021 to 8 May 2022 at the Museum of London Docklands, itself originally part of West India Docks – London’s first enclosed dock system and a hive of activity packed with valuable cargoes from around the world from 1802 until its closure in 1980.

The Museum of London Docklands opened in 2003 and is housed in a Grade I listed converted Georgian sugar warehouse. It tells the story of the port, river, and city – focusing on trade, migration, and commerce in London.

The exhibition draws upon the extensive archives of the Port of London Authority (PLA), established in 1909. And also critically explores the port from many perspectives, including the legacies, results, and reminders of the British Empire.

Importantly, the exhibition addresses the wider global context of London’s seaborne trade, most notably its historical dependence on the sugar trade and slavery. A document commemorating the original unveiling of the statue of merchant and slave owner Robert Milligan, which was removed from outside the Museum in 2020, is displayed alongside original plans for docks. It serves as a reminder of the truth behind the economic prosperity that made the building of West India Docks possible.

The Museum of London Docklands is home to the London, Sugar & Slavery Gallery – one of only three permanent galleries to tell the history of the transatlantic slave trade in the UK. The gallery opened in 2007, which was the year of the Bicentenary of the Abolition of Slavery Act. The gallery provides a place where the voices of descendants of enslaved Africans and all those affected by the legacy of the transatlantic slave trade can be heard.

As you enter, there is an animated geographical visual display that introduces how London’s port has shaped the physical, economic, and cultural landscape of the city over centuries. 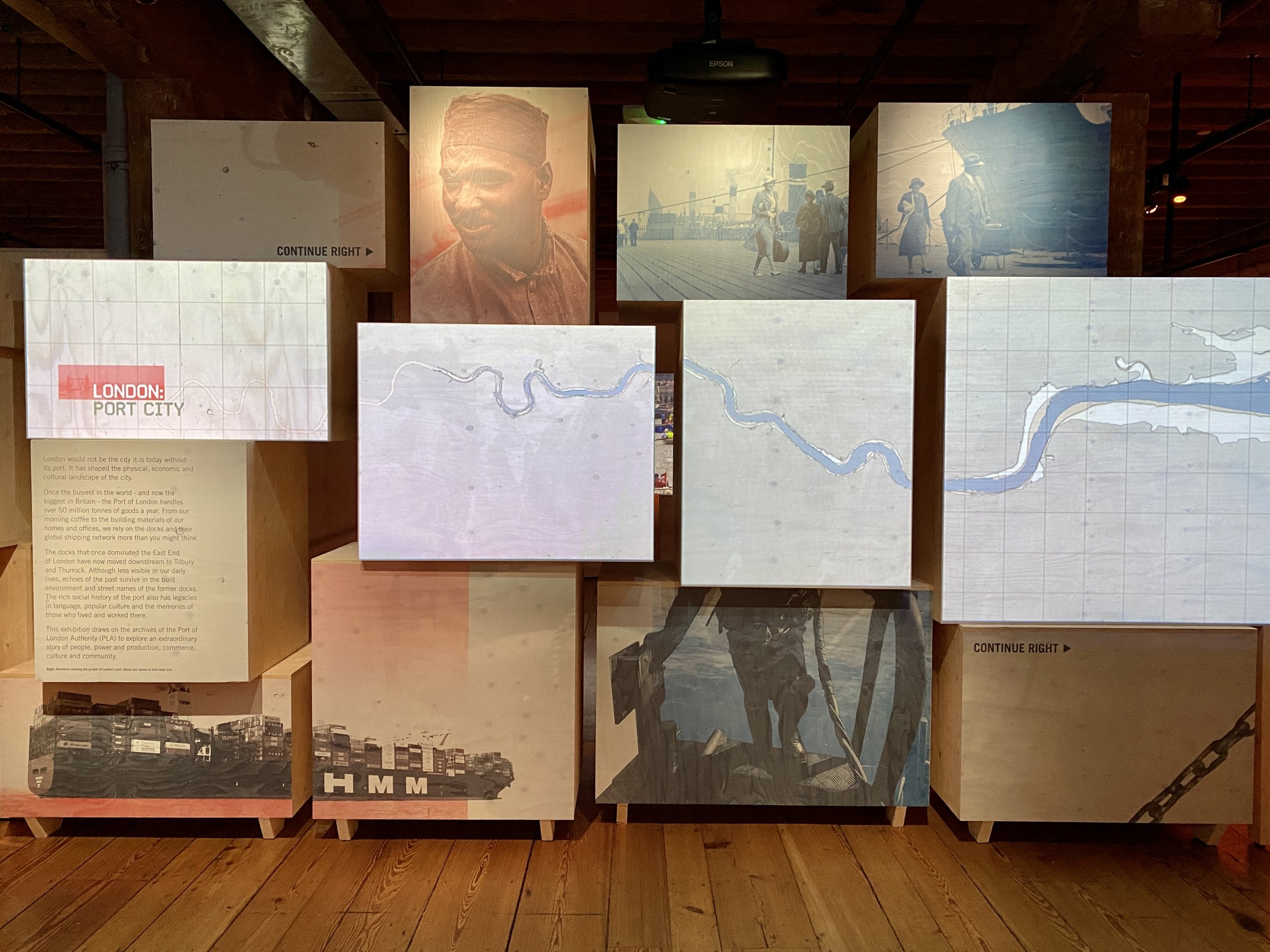 It’s incredible to think that London was once the busiest port in the world, and it is still the largest port in Britain, handling over 50 million tonnes of goods a year. While it all used to happen in the Docklands (that name makes a lot more sense now, eh?), the port of now downstream in Tilbury and Thurrock in the Thames Estuary. For many of us, it is out of sight, but the port is still very much part of London.

The Port of London Authority Archive is one of the most important social history archives for London, so it’s a treat to have some of the hidden gems out on display that have never been seen before.

The exhibition is thematic and not chronological. The first theme is ‘Movement and Exchange,’ and there is a fabulous Leslie MacDonald Gill ‘Highways of Empire’ poster. (Do see the articles I’ve written on his 1914 London Wonderground Map and his 1915 Theatreland Map.) 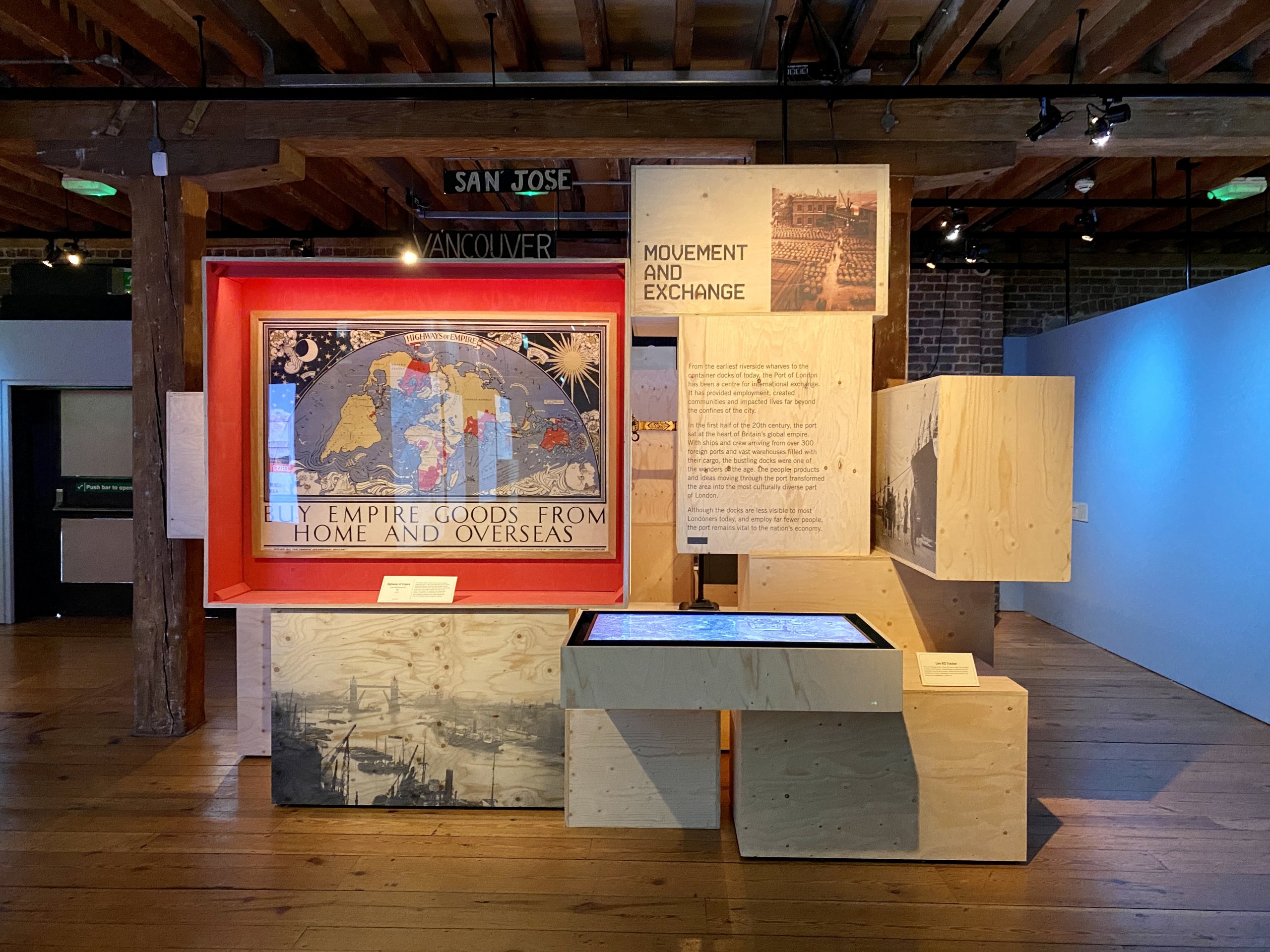 This 1927 poster shows London at the center of global shipping routes. Ships from over 300 foreign ports came to London and filled the warehouses with their cargo.

The poster was displayed in public places at 7 meters wide (over 22 feet), so it was highly influential. 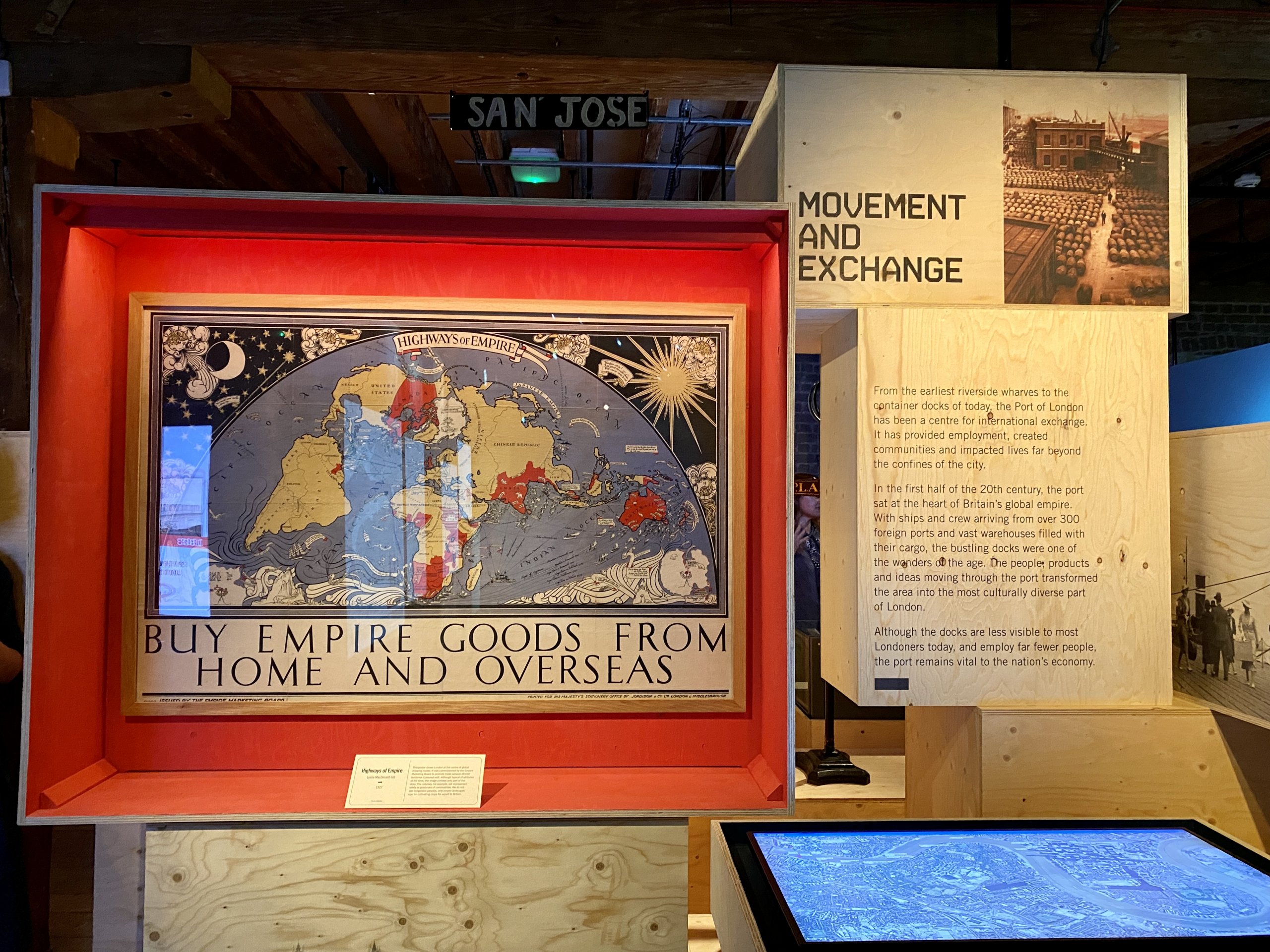 The screen in the bottom right of the photo above is an AIS Tracker – an Automated Identification System so you can see the vessels on The Thames in real-time. The port handles over 50m tonnes of cargo and receives over 12,000 commercial vessels each year, connecting with over 50 countries worldwide.

Look at the lower areas of the wooden crates for family ideas, such as this reminder that ambergris is whale poop and was used in perfumes. 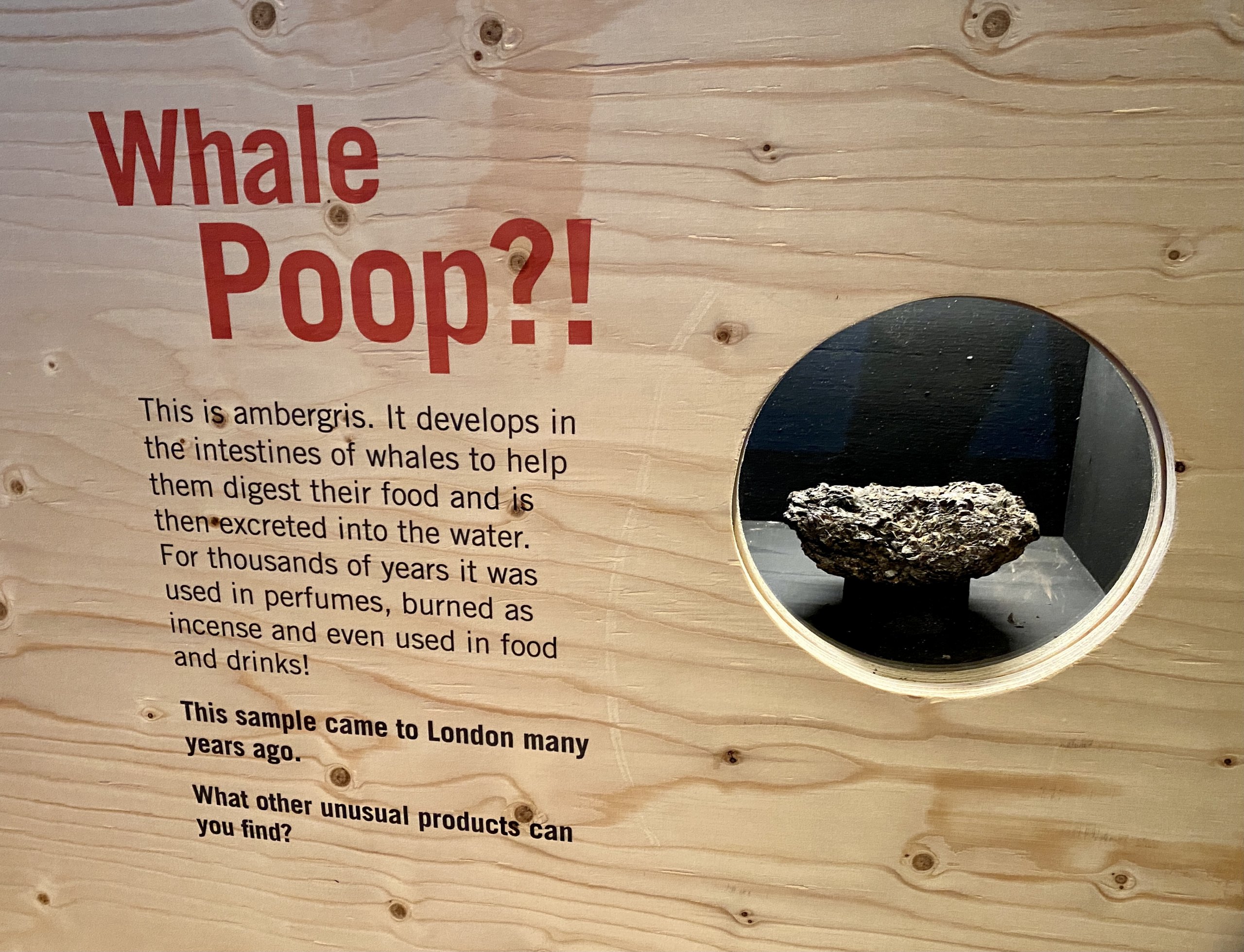 There are displays of samples of goods and ledgers as everything that came through the London docks was accounted for. By 1930 there were up to one million tons of produce housed in the PLA’s dockside warehouses at any one time.

There are also displays of wonderful photos so you can see the people who passed through the docks as well.

The next section looks at the people and the roles involved with the docks. It wasn’t all seamen as Mary Smith was a “Knocker Upper,” and it was her job to wake the dock workers. It was common practice to use a long stick to tap on the bedroom windows of the workers to wake them, but Mary chose to use a pea shooter. (Knocker Uppers also woke factory workers across the country, so it wasn’t just a dockyard idea.) 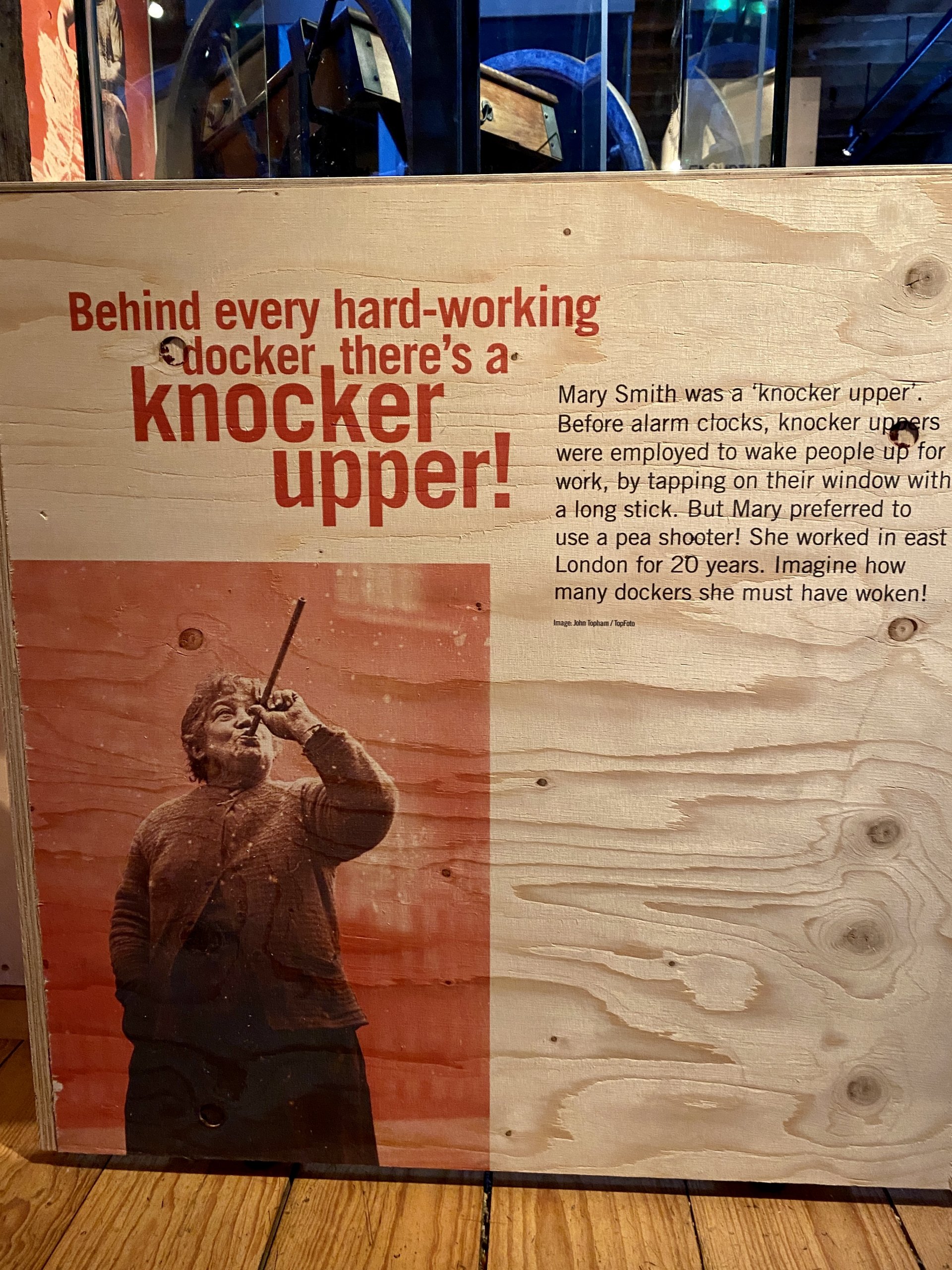 There are some ‘tools of the trade’ on display, including examples of the handheld hook that was used to lift and move the sacks from ships. 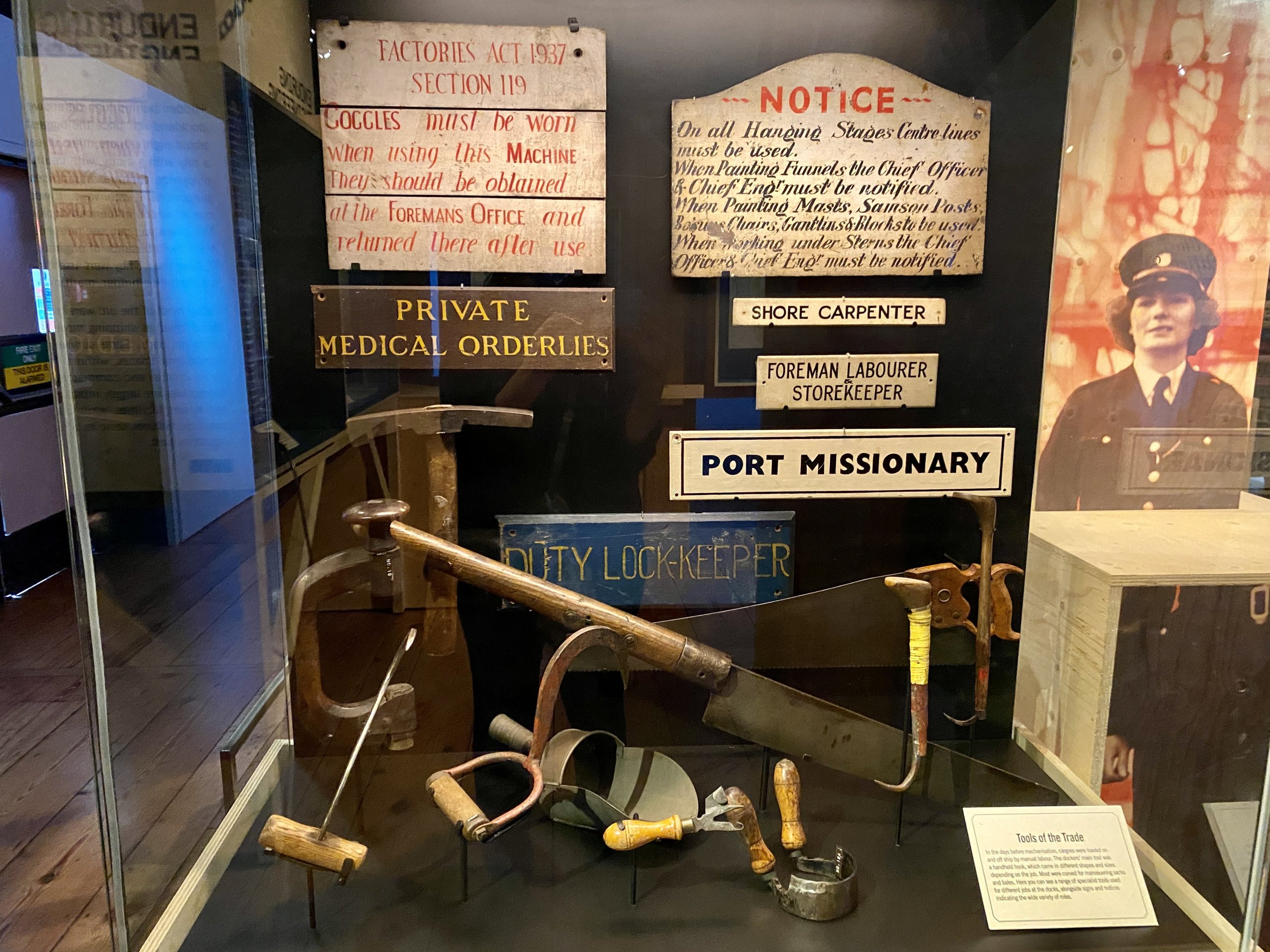 There was certainly a lot of roles needed at the docks! 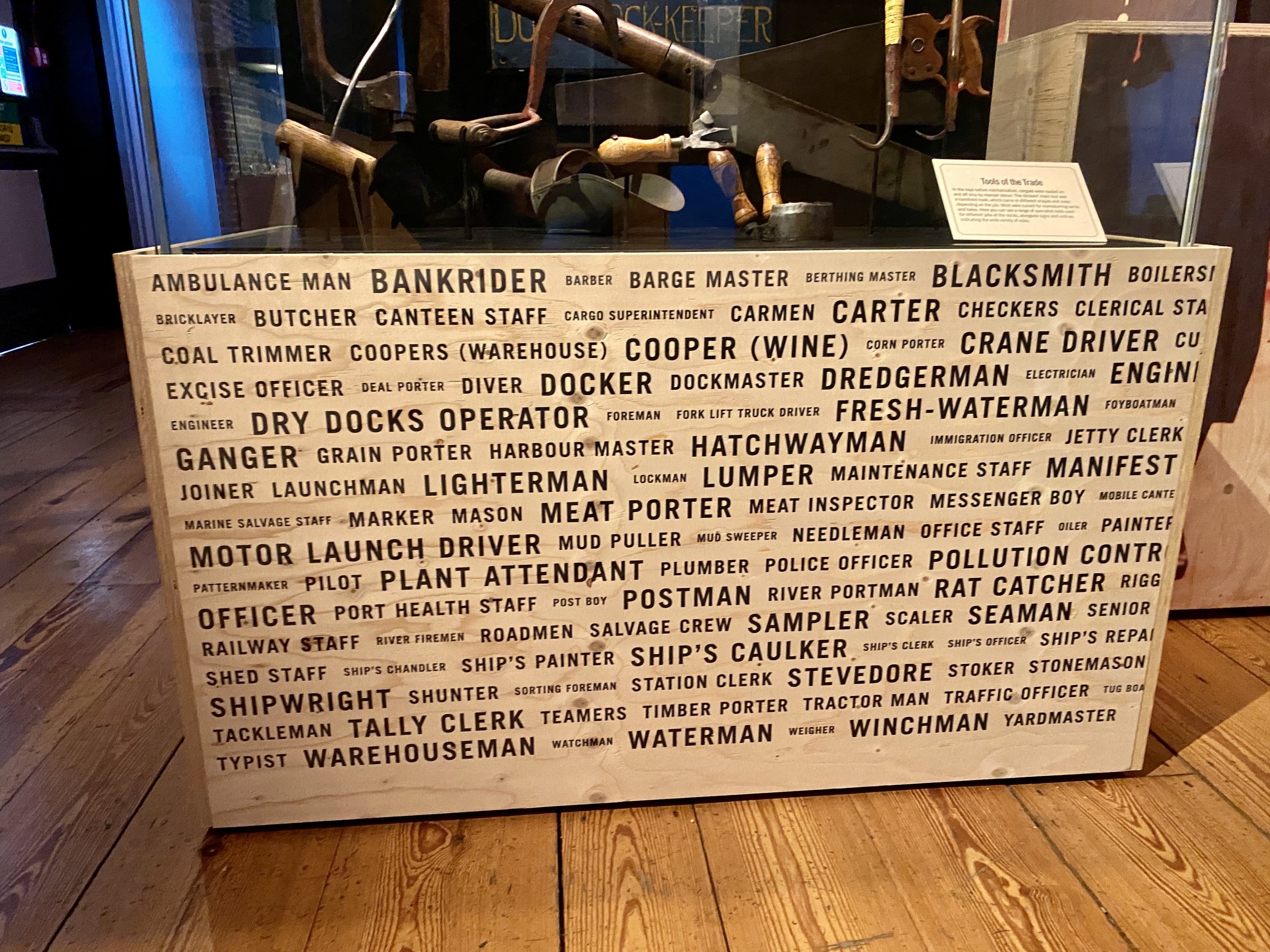 And there’s a large video section that covers topics such as the biodiversity of The Thames, what’s beneath the surface of the water, and the areas of scientific interest. 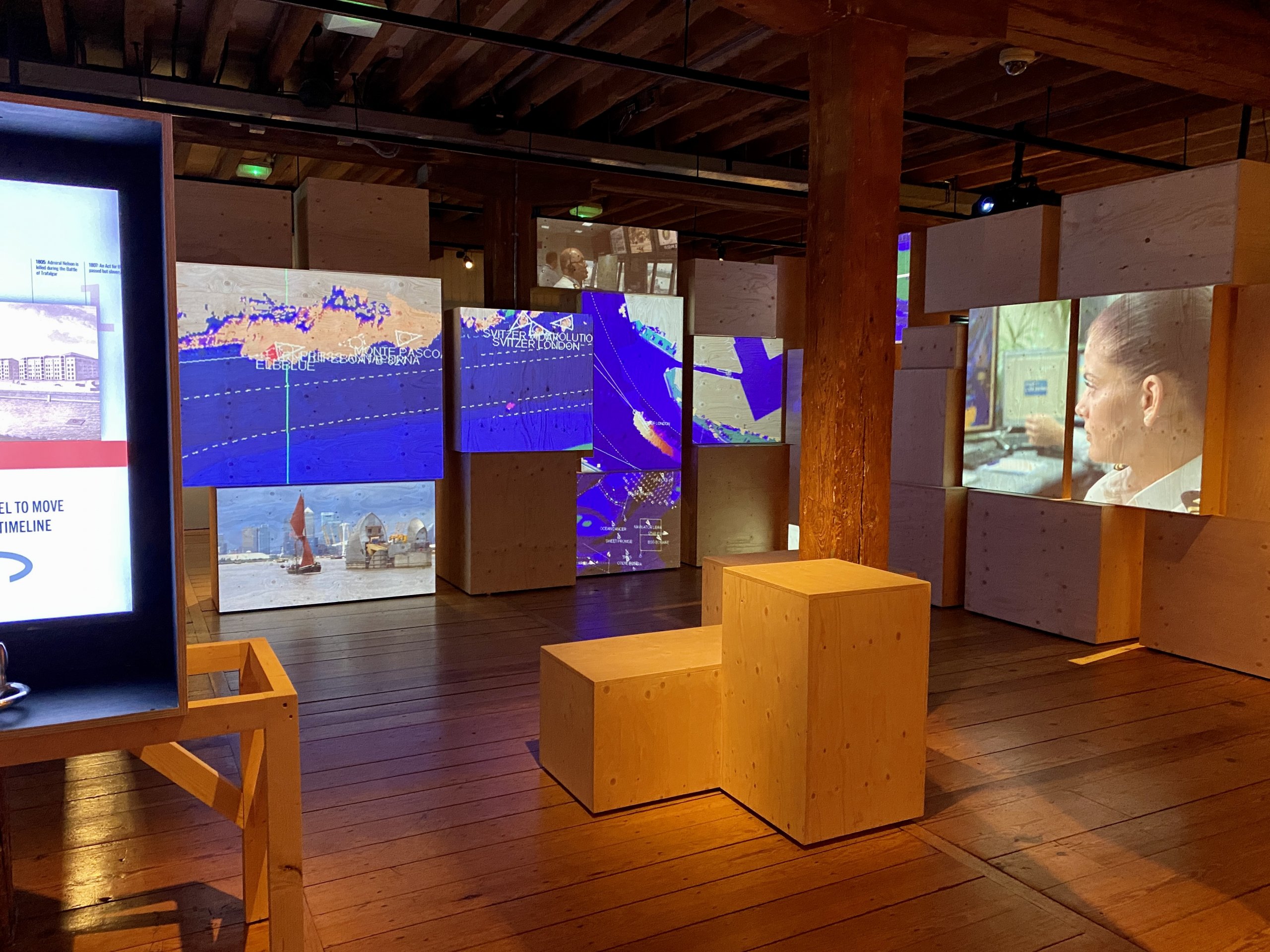 London’s dockland covered eight square miles of east London (I told you it was big!) There were warehouses, shipyards, factories, and offices clustered around the purpose-built waterways.

This section has wonderful maps and a 1968 film about the construction of Tilbury Port. There are also some facts, such as the cranes at London Gateway port are the largest in the world – each crane is the same height as the London Eye (138 meters/452 feet).

This is a simple but fun interactive display. There are 80 words and phrases on wooden blocks that you can pull out to see the origin of an expression or London place name. There are connecting words, too so you can create sentences. 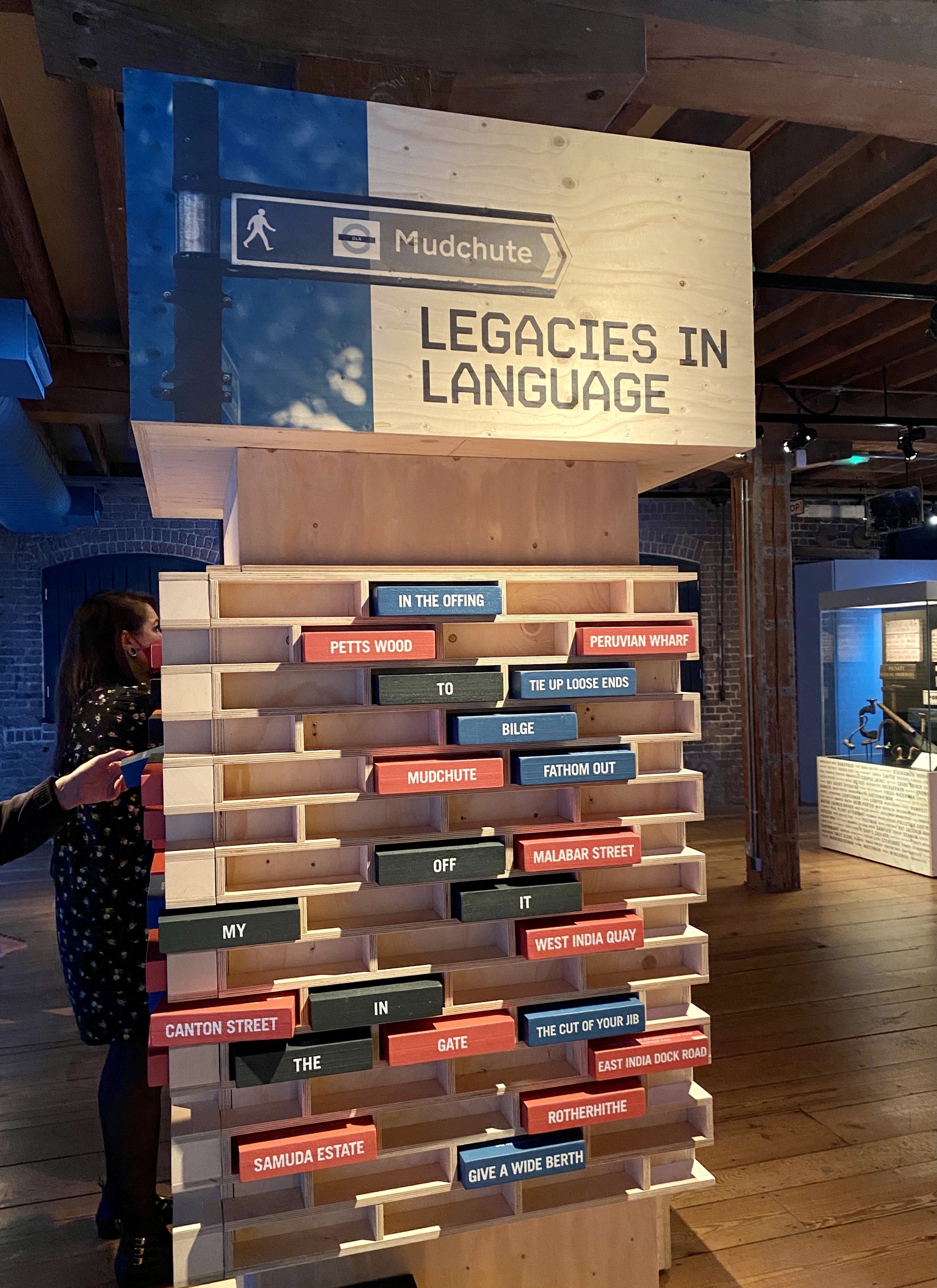 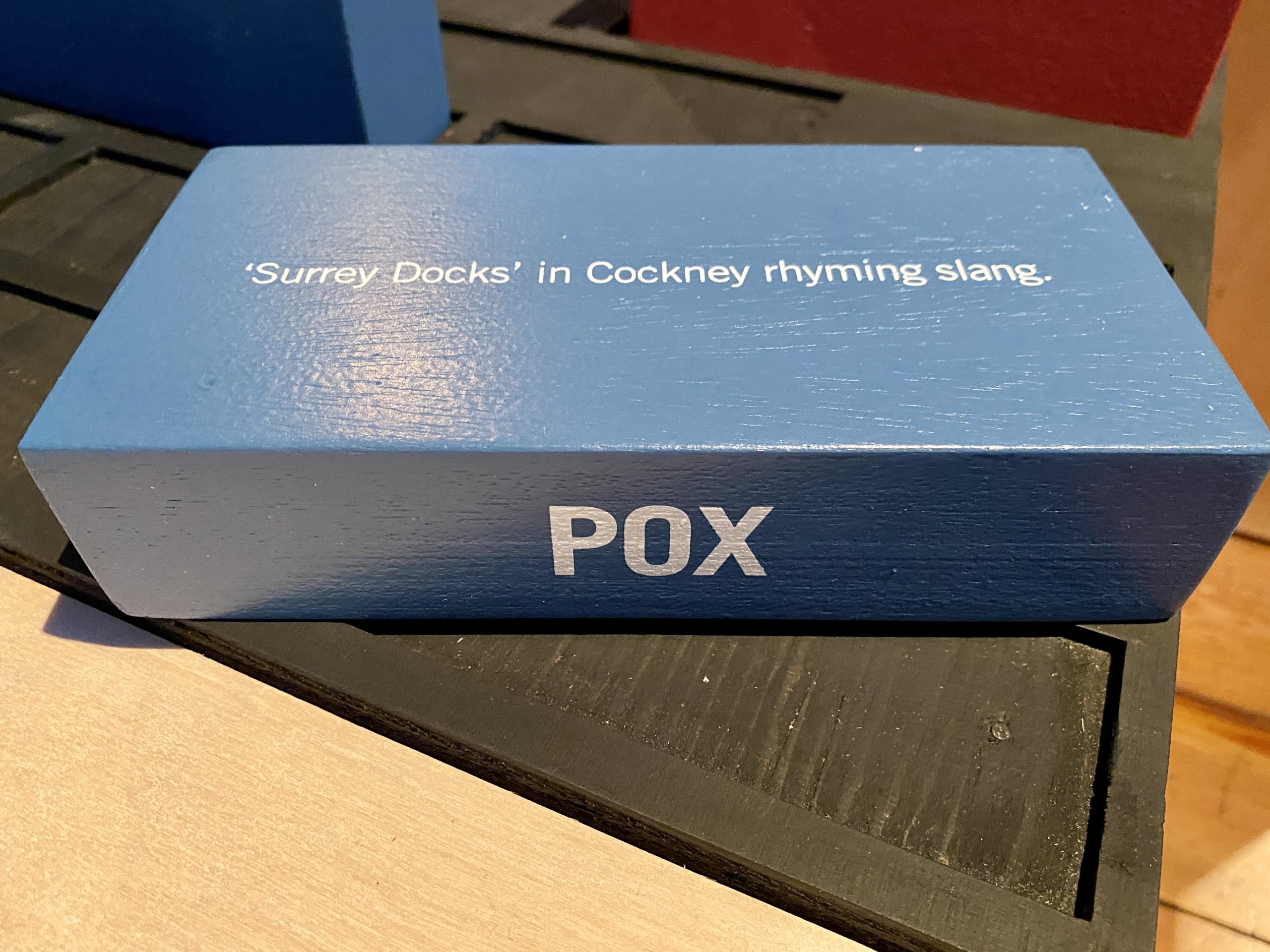 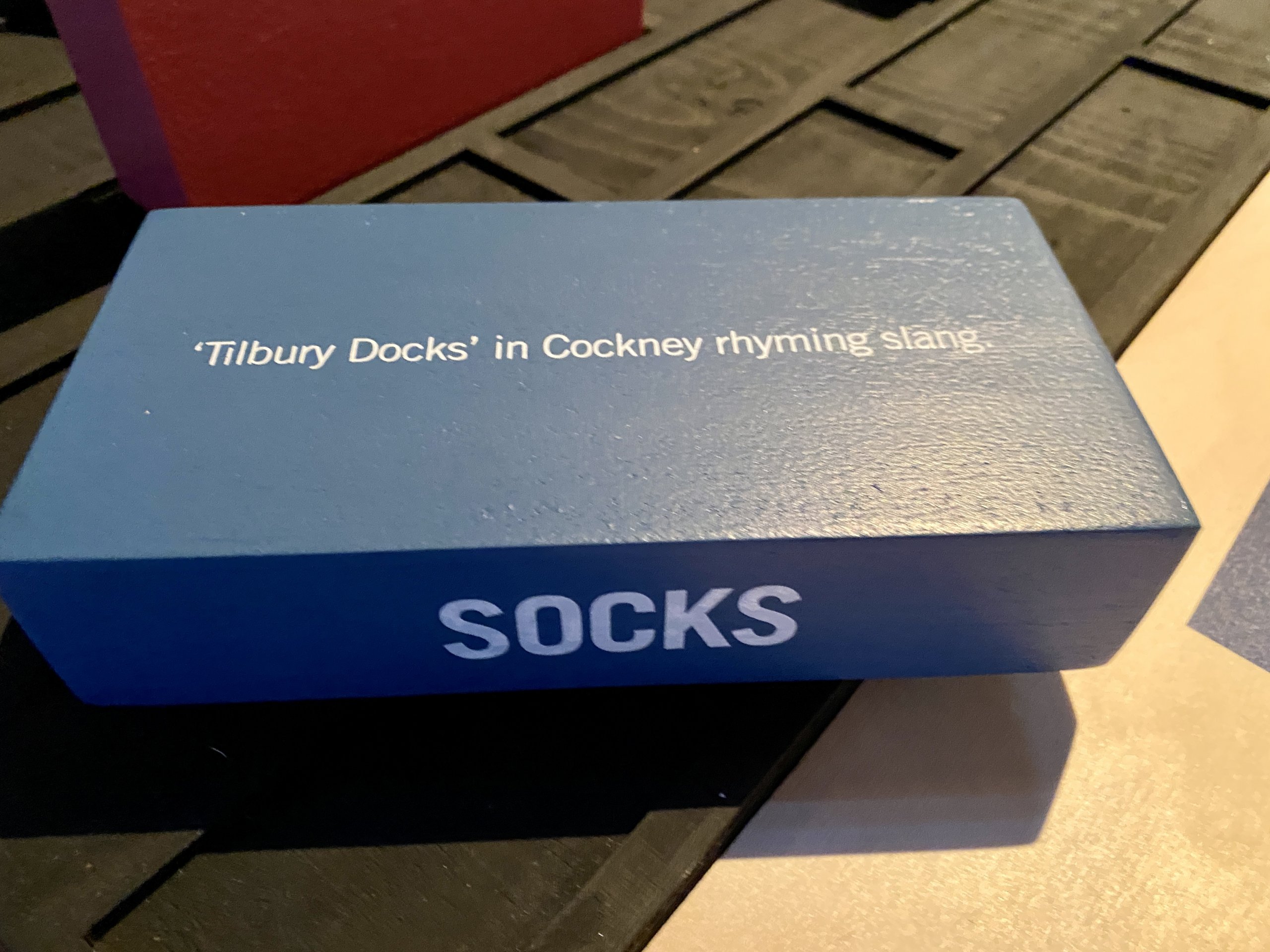 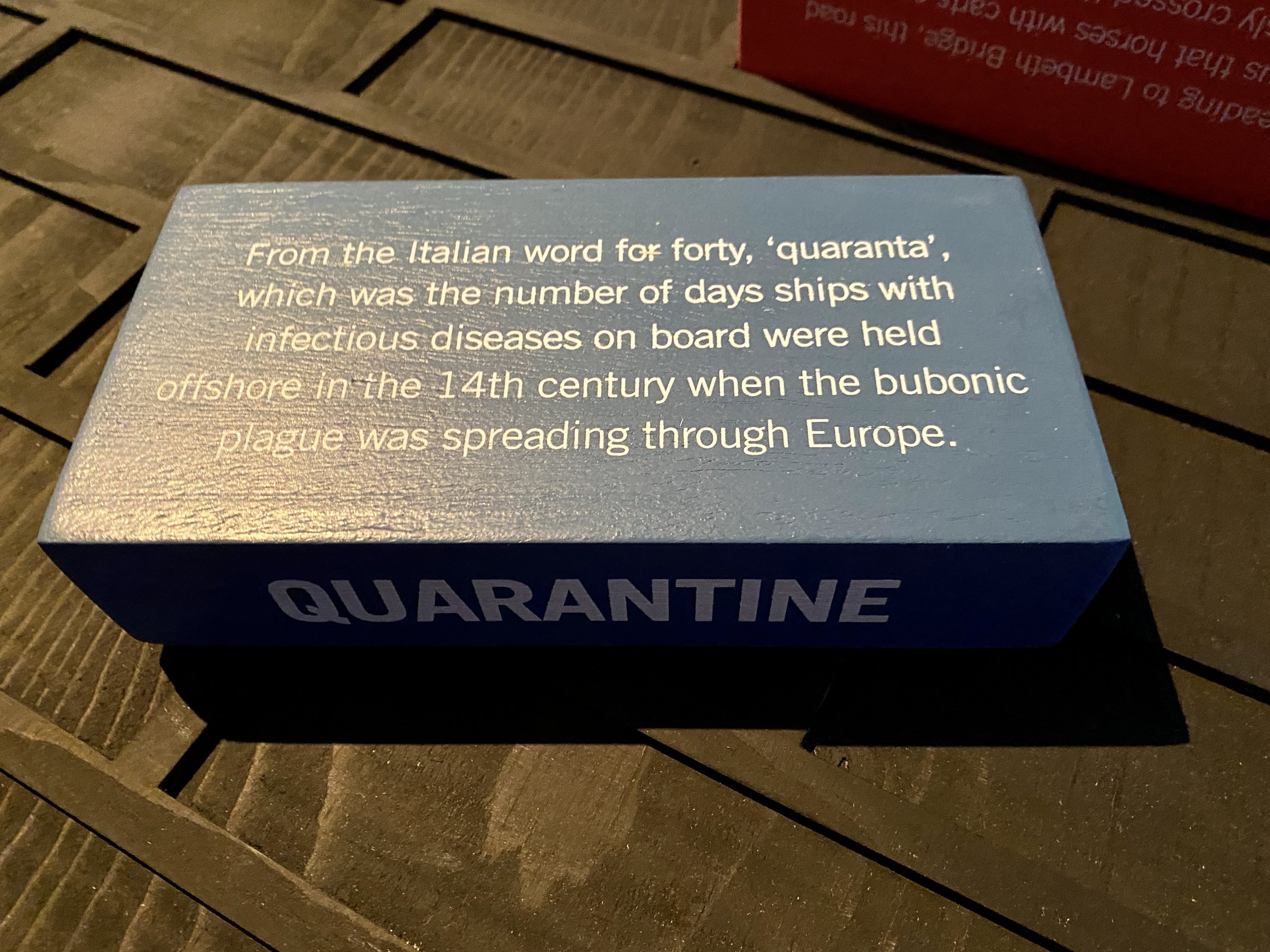 A good reminder that the smells of aromatic spices and pungent chemicals much have been overwhelming. It was said that “any old hand could tell his whereabouts while blindfolded” due to the unique aroma of the different docks.

There are some oral histories to hear that recall the sights and smells from the 1890s to the 1980s. 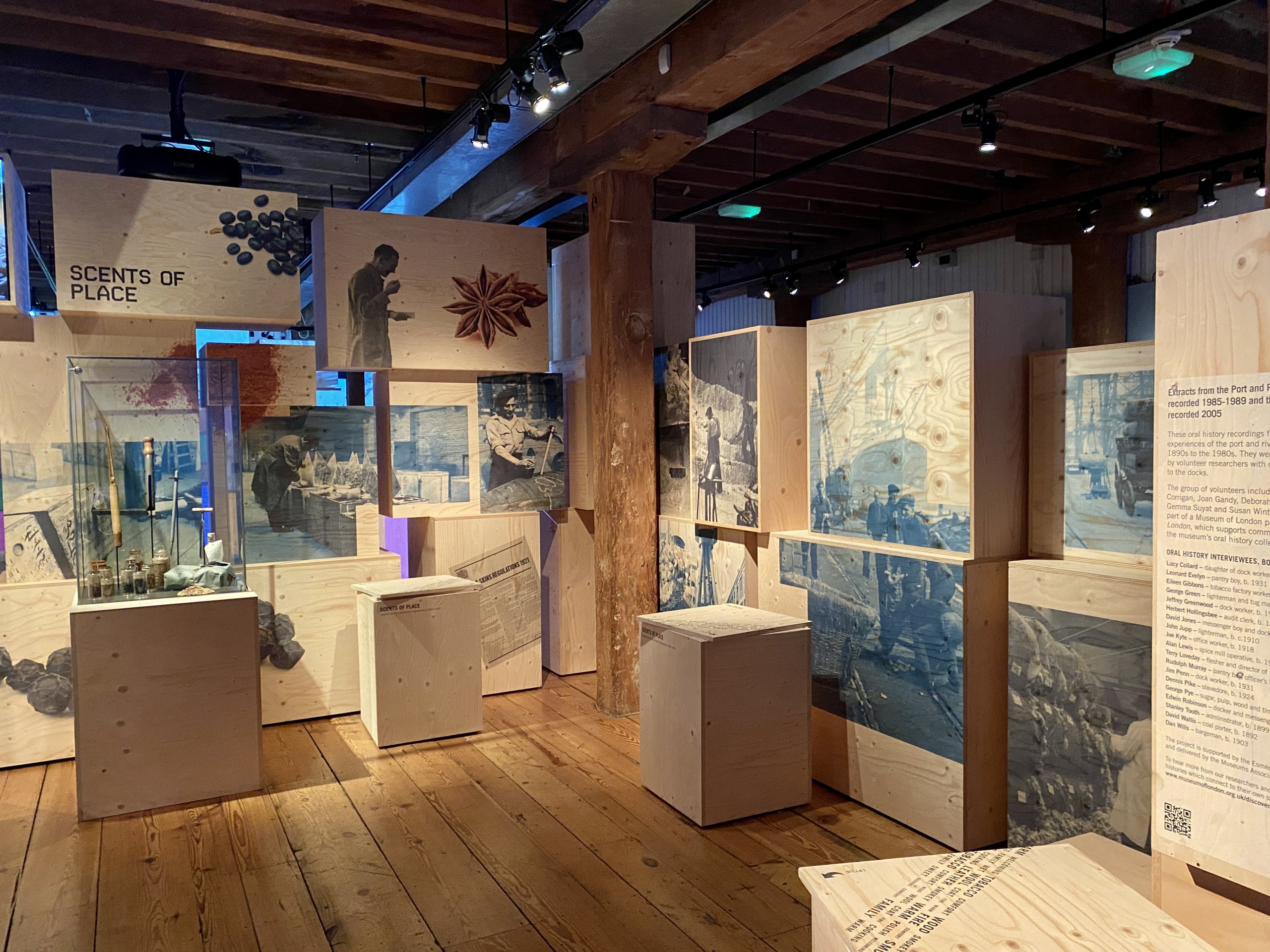 The last section has ‘The Port in Art’ on one side and ‘Depicting the Port’ on the other.

The artworks are diverse, and all come from the PLA Archives. 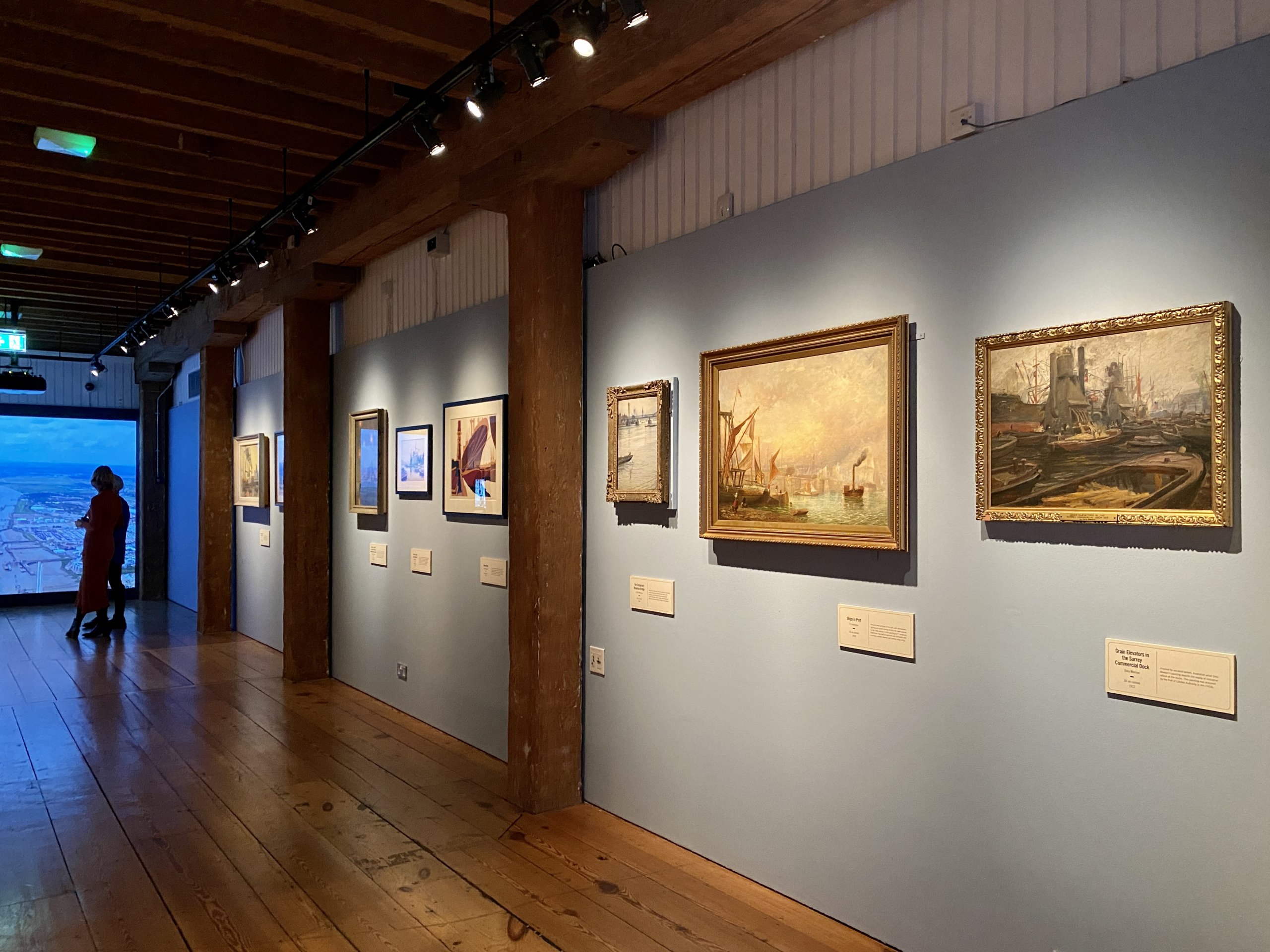 I particularly liked this 1938 view of the temporary Waterloo Bridge by C.R.W. Nevinson. 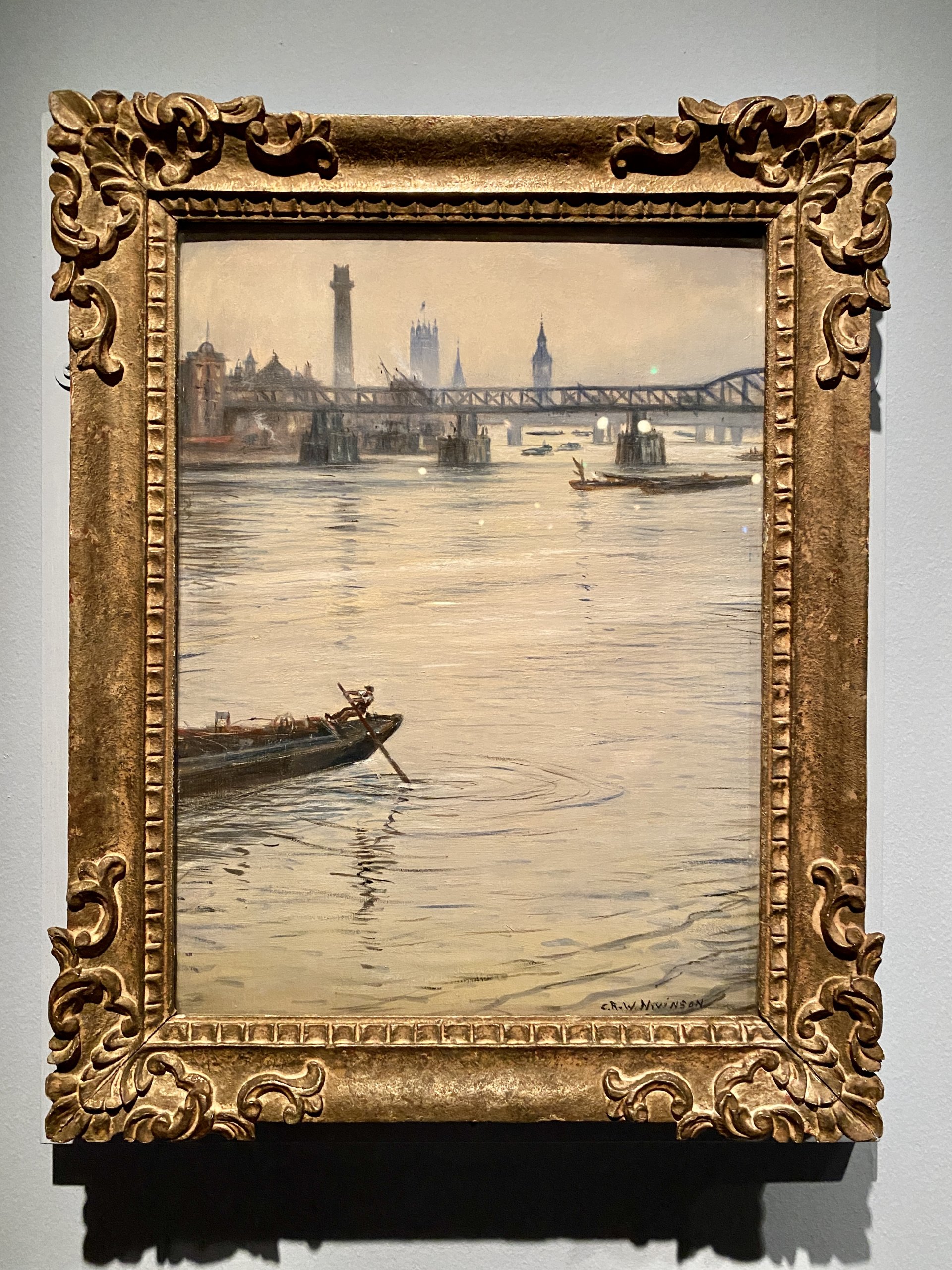 ‘Depicting the Port’ has promotional material and British Pathé newsreel. By the 1930s, the docks were promoted as a wonder of the modern age, and by the 1960s, the references to the Empire had disappeared.

These London Transport posters have that marvelous iconic style. 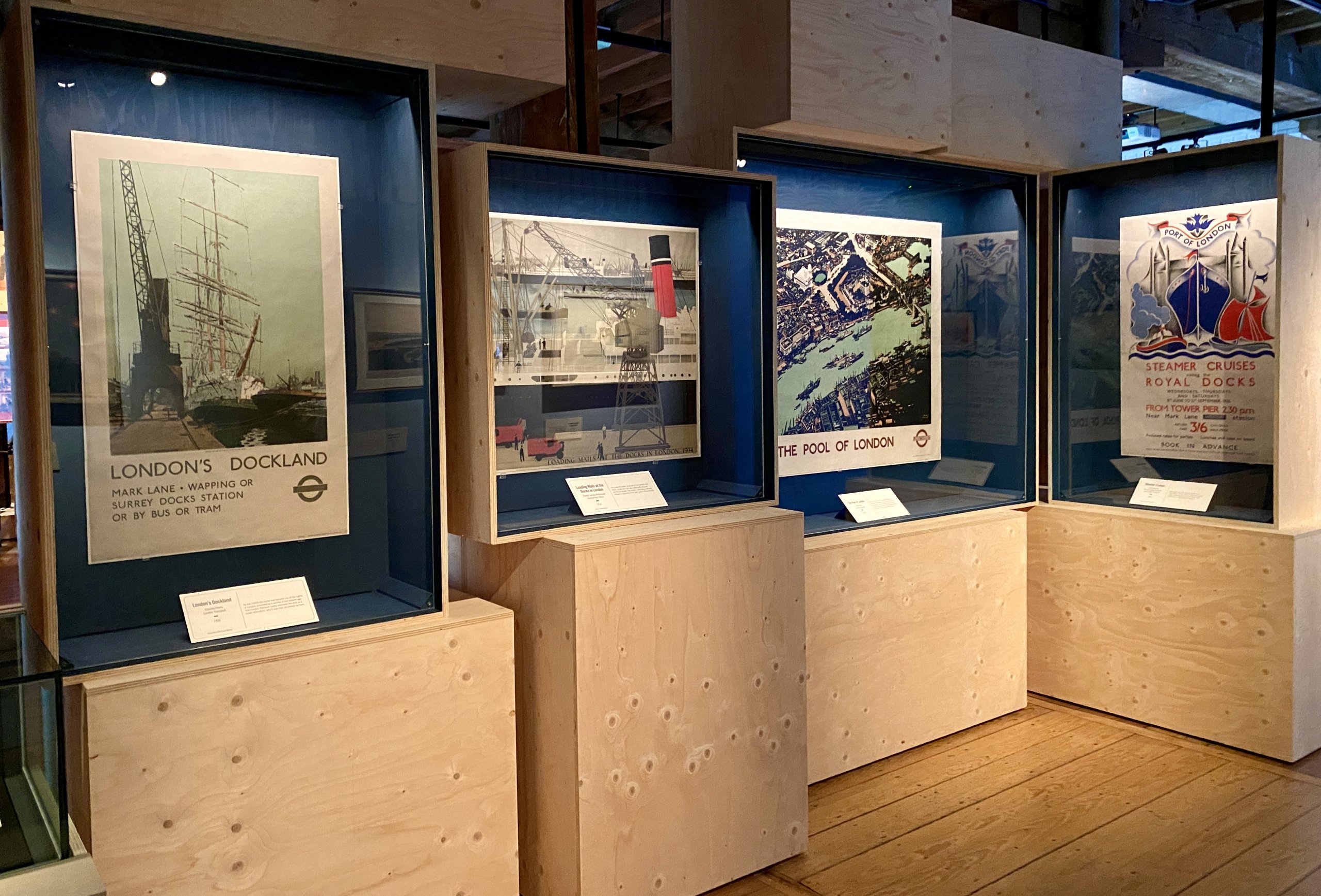 London’s docklands has featured in more films than you might think. From period dramas and animated family films to James Bond and gangster movies, the port has provided the backdrop to classic moments in cinema and television history. 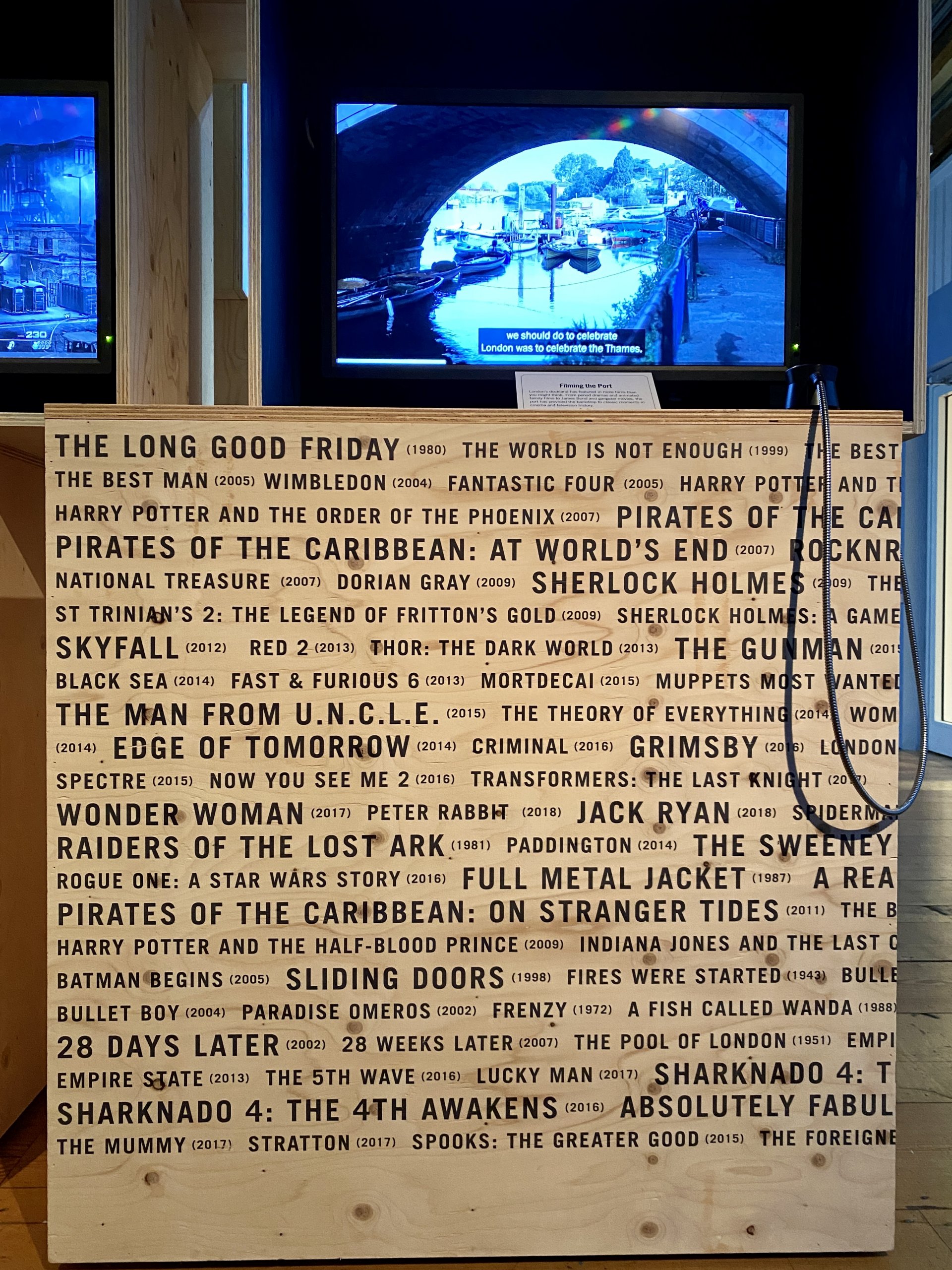 You won’t need long to see the exhibition – probably under an hour – but it is worth seeing, and you can then explore the rest of the Museum of London Docklands. London: Port City allows you to stand in the present, learn the history and look to the future.

Admission: The Museum is free to all. Please book a free general admission ticket in advance of visiting the Museum.

When you leave, do look at the display board outside the Museum to see the goods that came to West India Dock North Quay. 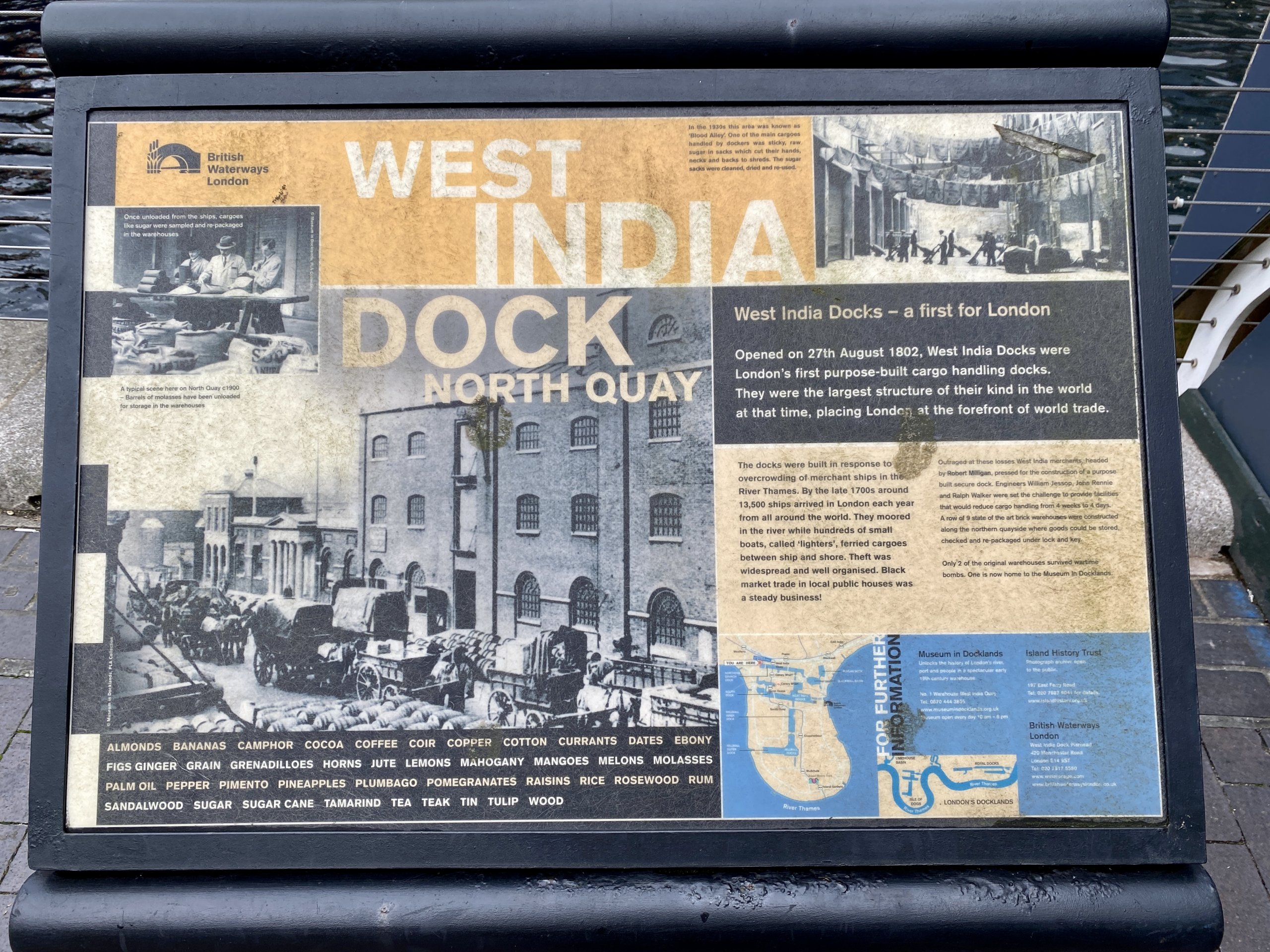 And do consider taking the short walk to Canary Wharf Pier so you can enjoy a boat trip on The Thames. 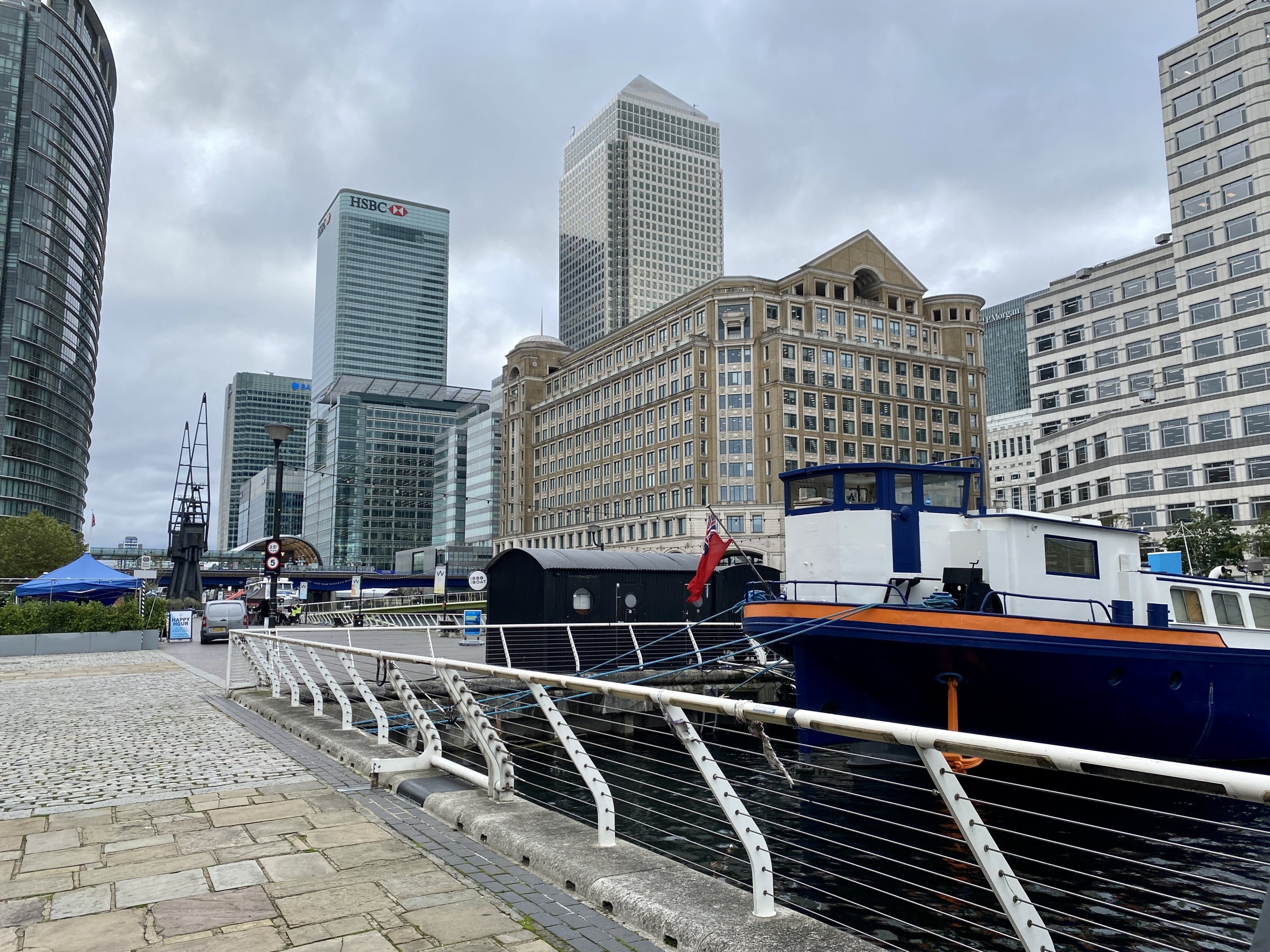