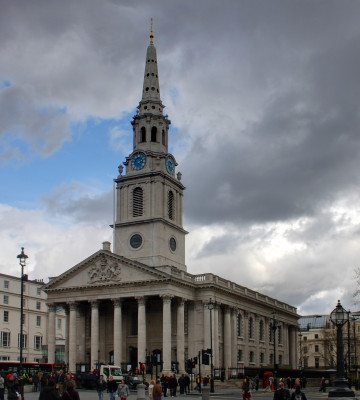 Forming one of the corners of Trafalgar Square and existing as a landmark on par with Nelson’s Column and the National Gallery.  Prior to the 13th Century, there is no reference to a church existing on the site in the City of Westminster.  The year 1222 marks the first recorded mention of the church when it came under a jurisdictional conflict between Eustace, the Bishop of London, and William, the Abbot of Westminster.  The Archbishop of Canterbury ultimately sided with the Abbot and the monks of Westminster Abbey began to make regular use of the church from that point.

The church is dedicated to St. Martin of Tours, and at the time it was founded, it was surrounded by fields, from which its name derives.  It was during this time when much of Westminster was still undeveloped that King Henry VIII rebuilt the church in 1542 and extended its parish boundaries to keep plague victims from being brought through the Palace of Whitehall.  Prince Henry, son of King James I, then enlarged it in 1607.  This version of the church was a brick building overlaid with stone, a tiled roof, and a stone tower.

It was this prior church building that would be pulled down in 1721 to make way for the current church.  A survey done on the church in 1710 showed proof that the walls and roof were in a state of decay.  In 1720, Parliament passed an act for the rebuilding of the church that raised some £22,000 towards construction.  Rebuilding commissioners selected James Gibbs as the architect on the project.  His first suggestion involved a circular nave and domed ceiling, but the commissioners rejected this, so he scaled back his plan to focus on a rectilinear plan with a neoclassical design that was accepted. 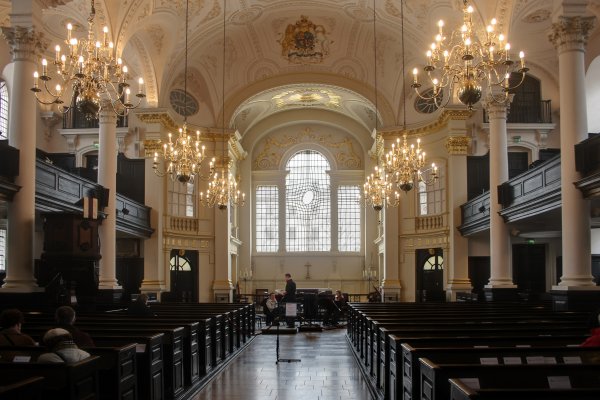 The foundation stone was laid on 19 March 1722 and took nearly four years to complete, with the finishing touches being placed in 1726.  The final look of Gibbs’ plan is a blending of Baroque and Palladian architecture that would eventually give birth to Neoclassical style.  The interior is covered in white plaster with Baroque designs and arched ceilings.  The ceilings are supported by Corinthian columns that help mark the galleries and arcades on either side.  King George I was said to be so happy with St. Martin’s that he gave £100 for the construction workers to share amongst themselves and £1,500 towards the purchase of the organ.  However, not everyone was happy with the design and it was heavily criticised at first until it became enormously popular and imitated widely in America.

St. Martin’s has ever been a fixture of this part of Westminster, even before the buildings that blocked the view of it were knocked down to construct Trafalgar Square in the 1820s.  The reputation of the church increased under Vicar Dick Shepperd, who coined St. Martin’s mission as being the “Church of the Ever Open Door”.  He spearheaded programs to assist London’s homeless and provided a place of thoughtful contemplation and ministry to soldiers going to, and returning from, the fields of World War I.

Today, St. Martin-in-the-Fields continues to be a major place of worship for the City of Westminster in addition to serve as concert venue and community centre.  Underneath the church is a crypt that not only includes gathering venues, a shop, and a chapel dedicated to Dick Sheppard, but also possesses its own lovely cafe.  Visiting the church will grant you the opportunity to take in displays of art or participate in some brass rubbing for a special souvenir to take home.  If you visit Trafalgar Square during your time in London, you would be remiss if you didn’t visit St. Martin’s.