You are here: Home / History / London Calling: A Brief History of London in the 1980s – Riots, Privitisation and Docklands Regeneration 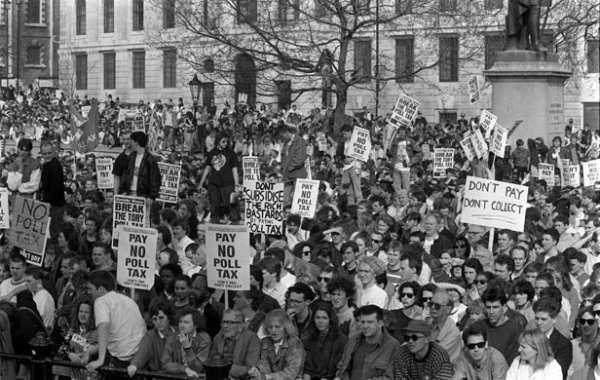 The 1980s were an iconic time for the United Kingdom, and London was at the centre of it all.  Short of a world war, there was probably no other period in which the social and political atmosphere changed so drastically.  From the conservativism of Margaret Thatcher to the rebellion of the Sex Pistols, 1980s London seemed to revel in extremes.  Unions and family-owned shops gave way to privitisation and impersonal, foreign-owned stores.  While some took to the streets in protest, others gathered in Wembley for a concert to bring help to less-fortunate populations.  Additionally, the music scene ranged from the anger of the Punk to the expressionism of New Wave and everything in between.

Arguably, this period of social change began even before the decade started officially.  The election of Margaret Thatcher’s Conservative government in 1979 and her premiership was one that didn’t see a point in hanging onto government-run industries that the Tories felt were costing more to keep open.  This included the Docklands that, as time went on, were unable to accommodate larger vessels.  As the cargo vessels moved east towards the port of Tilbury, Thatcher’s government opted to let the East End industry die off, though that didn’t mean it would let the area go with it.  In another example, the closing of the pits in the North may not have directly impacted London, but many Londoners had friends or family who worked there or felt that it was another example of the Iron Lady’s unfeeling attitude towards tradition and the working classes.  This led to the beginning of protests in the streets that would continue well into her introducing the Community Charge (also known as the “Poll Tax”) beginning in 1989.

Additionally, Thatcher’s government saw another means of relieving themselves of the burden of state-run industries by permitting their privitisation, beginning with the energy companies in 1983.  In the end, water, gas, and electricity were all privatized, which led to mixed results depending on who you ask, though also gave way to lower prices for consumers as competition took the place of the government-owned monopolies that came before the 1980s.  Interestingly enough, Thatch was resistant to the idea of privitising British Rail, an industry that would not change until her successor, John Major, divested the government of it in the 1990s.  Another major act of Margaret Thatcher’s government was the dissolution of the Greater London Council, an organisation that, by the 1980s, was led by the very left-leaning Ken Livingstone.  It’s largely believed that Livingstone’s resistance to Thatcher’s policies led to the government arguing for the GLC’s abolition in 1983, though this would not happen until 1986, and even then, the bill was hotly contested and passed by a thin majority.  Management of London’s services then either fell to the local boroughs or Parliament itself.  The situation would remain as such until the creation of the Greater London Authority in 2000.

Amidst all this political change, the youth of London led a social rebellion.  Turning their youthful rage to music, punk really took off, with leading bands of the time expressing their anger at the government or the lack of economic opportunities created.  The music of groups such as the Sex Pistols, The Clash, and Generation X (as well as Billy Idol’s own solo career) came to represent the feelings held by many of London’s young people.  Less angry, but no less politically charged, groups such as U2 from Ireland found an audience in young people who wanted change.  Artists began to feel the need to make a difference, leading individuals such as Bob Geldof of the Boomtown Rats to first organise Band Aid in 1984, using the song “Do They Know It’s Christmas?” to raise money for poorer regions in Africa.  Realising that one song would not be enough, he led the charge to create Live Aid, a concert featuring many bands that shared his ideas and ultimately raised £150 million for relief efforts.  The concert at Wembley Stadium had an attendance of 72,000 people.

The skyline of the city also began to experience a major change during the 1980s.  The Natwest Tower, now known as Tower 42, opened in 1981.  One of the city’s leading cultural locales, The Barbican Centre, followed in 1982.  This building today is home to several stages, movie theaters, concert halls, art galleries, and libraries.  In one of the city’s first true multi-use buildings, it is today home to restaurants as well.  With its similarly futuristic design, the Lloyd’s Building opened in 1986.  And even as Thatcher’s government allowed the East End’s shipping business to render it a ghost town, Dame Maggie had no intention of letting it remain this way.  In 1981, the government formed the London Docklands Development Corporation, which made efforts to invest in the region and helped Billingsgate Market relocate there.  It developed the Docklands Light Rail to provide greater infrastructure to the area and helped to create new developments that brought office buildings, restaurants, residences, and shops.  By the time the corporation wrapped up in the late 1990s, it had inspired similar development efforts in other parts of the United Kingdom.

This, from the politics to the very buildings, London experienced a constant change during the 1980s that has rarely been seen before or since.  Despite the often-chaotic times, London carried on and held itself together until brighter times in the 1990s and the rise of even more impressive structures in the 2000s.  The changes that came about would help to make London what it is today, and the evidence of it can still be seen across the whole of the city.