You are here: Home / Culture / For Silly Walks: A Guide to Monty Python’s London 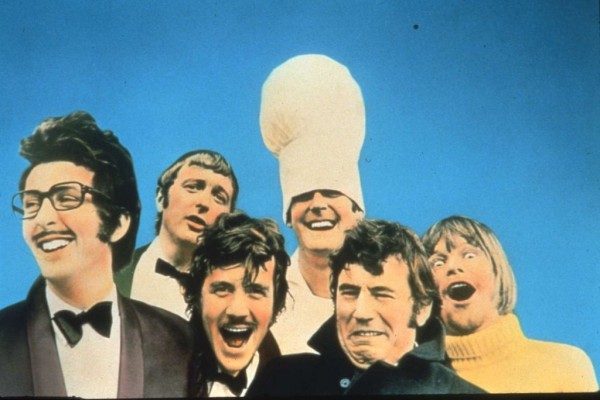 “It’s!” This line opening nearly every episode of Monty Python’s Flying Circus heralded comedy unlike any Britain had seen at the time. Growing out of such comedy shows as Spike Milligan’s Q5, At Last the 1948 Show, and The Frost Report, the six Pythons comprising John Cleese, Graham Chapman, Terry Jones, Michael Palin, Eric Idle, and Terry Gilliam would come to eclipse their predecessors. Headquartered at BBC Television Center, the show naturally reached out beyond the TVC to film in surrounding London. From the early days of Monty Python’s Flying Circus up until their last film, The Meaning of Life, London always had a role to play in making comedy history in nearby neighborhoods in Ealing, Shepherd’s Bush, and Acton.

Thorpebank Road in Shepherd’s Bush provided another iconic location. This normal-looking street with its row houses began with the “New Cooker Sketch” at No. 94, but morphed into “The Ministry of Silly Walks” at No. 107. It was here that we see John Cleese’s famous walk as he emerged from what used to be a corner shop, taking great strides down Dunraven Road and then Ludgate Hill before meeting Michael Palin. For added silliness, the Teddington Lock served as the filming location for “The Fish-Slapping Dance”, which is exactly how it sounds for those who haven’t seen it. Michael Palin returned to Teddington to film a brief in-character documentary about the sport of fish-slapping.

Ealing as a location included Graham Chapman climbing the Uxbridge Road, which was really the South Ealing Road. While much of the camera’s attention is focused on Graham Chapman on the road itself, you may be able to determine the particular location from John Cleese’s reporter character commenting on Chapman’s feat. Nearby Acton featured heavily in the “Hell’s Grannies”, where the High Street showcases Eric Idle’s reporting on the gang violence and the grannies themselves wreak havoc on unsuspecting young people. Acton also featured in “Bicycle Repairman”, including a local laundromat where Palin’s character quickly changes from Mr. F.G. Superman into his alter ego.

One of the most memorable sketches done during the TV program’s run was the “Upperclass Twit of the Year” sketch. A competition that put several well-to-do idiots in competition with each other required them to slam car doors, take a bra off a blow-up doll, and finally, shoot themselves in the face. The majority of the sketch was filmed in Hurlingham Park, including the stadium and nearby road. Meanwhile, though it wasn’t a filming location per se, the editing suite used by Michael Palin and Terry Gilliam is located at Neil’s Yard, Covent Garden.

Even the films made use of London as a location, and while much of Monty Python and the Holy Grail was filmed in Scotland, especially Doune Castle, Hampstead Heath was used for several external locations, including King Arthur’s approach to the French Castle, Sir Lancelot’s charge against Swamp Castle, and Lancelot’s arrest at the end of the film. Cleese has said that during filming of his charge, people would walk around the filming paying it no mind, as if to say “If we look at it, it will only encourage such behavior.”

While The Life of Brian confined most of its filming to Tunisia, the more sketch-centered The Meaning of Life returned to London for a number of scenes. The first of which was the opening sketch, “The Crimson Permanent Assurance”, where a band of accountants sail their building like a pirate ship, plundering other companies. The building they use is actually 71 Fenchurch Street, the real-life headquarters of Lloyd’s Register of Shipping and the Lloyd’s Avenue facade doubling for the accountants’ ship. The well-known sketch featuring the cartoonishly overweight Mr. Creosote was filmed at Porchester Hall, 45 Porchester Street, which in its daily life is a for-hire venue. Lastly, the interior of the Battersea Power Station was dressed up for the very bizarre “Find the Fish” sketch.

Even more locations, homes, bus stops, and so on were used over the course of Python’s history, but finding a comprehensive list can be difficult. Japan once published a guidebook for that nation’s fans of the program, but it is itself a Holy Grail of a find, even if you read Japanese. In the meantime, if you opt to go for a silly walk down Dunraven Road, you probably won’t get as many incredulous looks as you’d think.