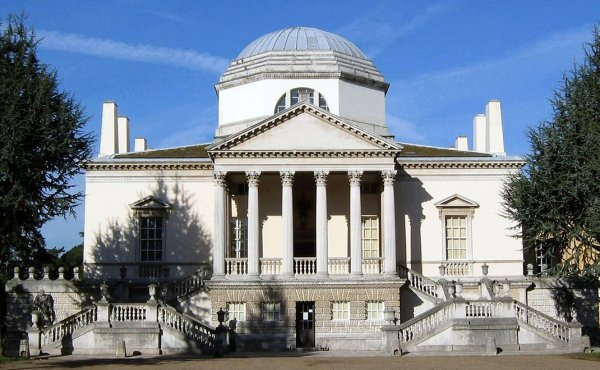 One of the last Neo-Palladian manor homes left in London, it is named for the area of the city in which it can be found.  The original Chiswick House was a Jacobean home built in approximately 1610 and was the property of the Wardour family.  It was then sold to Robert Carr, 1st Earl of Somerset, and later to Carles Boyle, 3rd Viscount Dungarvan.  After a fire in 1725, Richard Boyle, the 3rd Earl of Burlington, opted to rebuild the family summer home just a bit to the west of the original building.

Boyle was well-known in his day for his knowledge of classic art and architecture.  He had translated the works of Italian architect Andrea Palladio.  Six years before the fire at Chiswick House, he had the chance to travel to Italy and further engrossed himself in the Palladian style.  Burlington decided to rebuild the manor as a “villa” in his desire to bring this classical Italian style back to prominence in England.  Rather than hiring another architect, he opted to do the work himself, only partnering with protégé William Kent to help design the new Chiswick House.

Work began on the villa in 1726, just a bit north-west of the original Jacobean mansion.  He modelled it after Palladio’s Villa Capra in Vicenza, though borrowed much from classical Roman buildings and merged those designs with more modern 16th Century locations.  After its completion in 1729, Burlington did mean to live in the house, but only to use it for entertaining, housing his art collection, and providing an example of his architectural views.  Later on, Burlington left Kent to design the gardens, relaxing the more formal style of the original gardens.  Chiswick House then became one of the buildings that helped to inspire the Neo-Palladian style in both the United Kingdom and the United States.

The home remained in the Boyle family until Richard’s death in 1753.  His daughter Charlotte had married William Cavendish, the 4th Duke of Devonshire, five years earlier and the house subsequently passed to them.  The 5th Duke of Devonshire, also named William, and his wife, Lady Georgianna, also loved to use Chiswick House as a getaway home and a place to throw lavish parties.  It remained in the Cavendish family for over 150 years.  During the 19th Century, the Cavendish family leased it to a number of successive tenants.  Samuel Ware built a 300-foot conservatory on the grounds in 1813 and gardener Lewis Kennedy built a geometric Italian garden around it.

During this time, the home became a well-known location for those who wished to be seen, including Handel, Charles James Fox, and Queen Victoria and Prince Albert.  Albert Edward, the Prince of Wales (and future King Edward VII) lived there during the 1870s, but not too long after this, the 9th Duke of Devonshire rented Chiswick House to a pair of doctors who sued it as a mental institution.  The sphinxes present at the gate were sent to Green Park for Queen Victoria’s diamond jubilee, but were never returned.  It would also be the 9th Duke who sold Chiswick House to Middlesex County Council in 1929, years after it had begun to fall into decline.

It found a smattering of uses in the following years, including as a fire station during World War II.  Chiswick House was damaged by a V-2 rocket on 8 September 1944, and post war, a campaign to save the house kept it from being entirely demolished, though two of the wings would still be torn down in 1953.  It was also during the 1950s that the home was sold to the Ministry of Works and later passed to English Heritage, which has maintained the gardens since 1984.  Hunslow Council eventually formed the Chiswick House and Gardens Trust in 2005 and fully took over management of the estate in 2010.  Today, its public status leaves Chiswick Gardens open to the public and free to visit.  The gardens remain open from 7AM until dusk, while the house is open from 10AM to 7PM and comes with a small cost to visit. The House will be closed November 2016 – Re-opens fully April 2017.