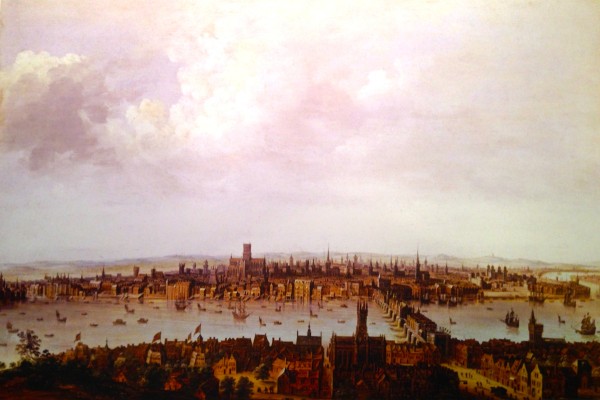 Editor’s Note: Due to the popularity of featuring a work of British art every week on our sister site Anglotopia, we’ve decided to do something similar here at Londontopia.

This view of London from Southwark depicts the capital around 1600 but is not completely topographically accurate. It does however convey a generalized view of the City and is one of very few surviving paintings to do this. One is at Chatsworth and another at the Society of Antiquaries. The biggest landmark of note in the painting is Old Saint Paul’s Cathedral off in the distance.

It relates to a print by Clement de Jongh ( fl. 1640-70) and has been tentatively dated by means of technical analysis on the panel to 1625-1655. The two main inaccuracies are that of Whitehall on the left and the river bend on the right which have been squeezed in although they are not part of the view. It was taken from the top of Southwark Cathedral a popular viewpoint for artists drawing to the south. The artist is unknown but likely to be from the Netherlands.

London never looked like this again – it burned to the ground in 1666 and took on a more familiar look that we know today including the new Saint Paul’s that graces London’s skyline now.