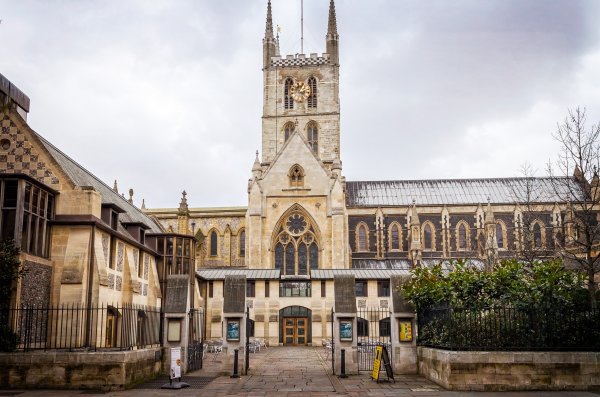 Near the famous London Bridge on the south bank of the Thames is Southwark Cathedral. The origins of the church are something of a mystery and while no one really knows when the first church building was constructed, but it is believed that a church has existed on the site for over 1,000 years. It’s from 16th Century historian John Stow who related reports of a woman named Mary who had used profits from a Thames ferry she inherited to start a nunnery in Southwark. It was believed that the nunnery existed well before the Normans came to London, possibly as early as the 7th Century. Prior to this, a Roman villa existed there and its pavement was incorporated into the floor. Excavation on the cathedral site in 1977 discovered a well and a pagan statue below the choir.

The first actual records of the church’s existence come from the Domesday Book in 1086, describing a “minister” or monastery existing in Southwark since the time of Edward the Confessor. Control of the church passed to Odo, the Bishop of Bayeaux and half-brother of King William I, then to William de Warrane, the Earl of Surrey. In 1106, two Norman knights named William Pont de l’Arche and William Dauncey “refounded” the church as a priory following the rule of St. Augustine of Hippo and renamed it St. Mary Overie (or “St. Mary Over the River”) for the woman who had allegedly founded the original church and to distinguish it from many other churches with the same name. In addition to the monastery, they built a hospital and counted on the patronage of the Bishops of Winchester, first William Guilford and then Henri of Blois, to construct and support St. Mary’s.

Unfortunately, tragedy struck in 1212 when a fire destroyed significant portions of Southwark, including much of the church, hospital, and priory. The doorway on the north aisle of the nave is one the only remaining parts of the previous church. The Bishop of Winchester at the time, Peter des Roches, began the reconstruction effort and built the current cathedral in the Gothic style, becoming one of the first Gothic buildings in London and the oldest one still standing. Work began in 1215, the cathedral was consecrated by the bishop in 1260, and completed around 1283. Parts of the cathedral, including the south transept and the tower, had to be rebuilt following another fire in the 1390s. The nave roof later collapses in 1468 and the vault was rebuilt in wood. Bishop Richard Fox constructed the stone altar screen that separates the choir from the retro-choir in 1520. 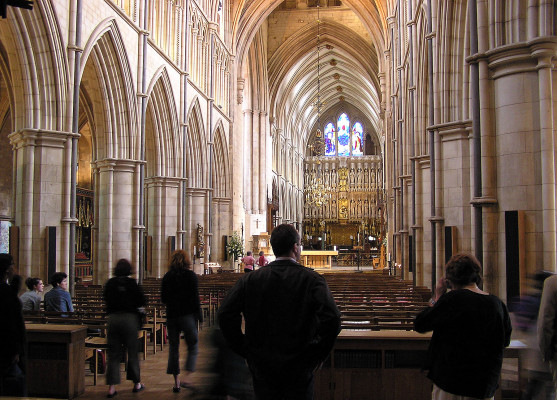 With the Dissolution of the Monasteries in 1539, the cathedral was turned over to the Crown in 1540. King Henry VIII renamed it St. Saviour’s and leased it to the congregation as a parish church, an arrangement that remained until 1611 when a group of businessmen known as “The Bargainers” purchased the church from King James I for £800. During this period, the church developed a close relationship with Elizabethan dramatists, including William Shakespeare. The Bard’s brother, Edmund, was buried in the church in 1607 and one of the church’s stained-glass windows depicts scenes from his plays with an alabaster statue below that features a reclining Shakespeare writing with his quill.

By the 19th Century, the cathedral was in need of serious repairs and there was some discussion of tearing it down, along with London Bridge, and building a smaller church on the same site. Instead, while London Bridge’s demolition went ahead, the bridge committee opted to restore the Southwark Cathedral, yet parts of the church including the lady chapel were demolished. Architect George Gwilt came to the aid of the church and worked hard to repair and strengthen the nave and the tower, as well as restoring the aisles, choir, and retro-choir. The Prince of Wales, the future King Edward VII, laid the foundation stone to the new nave in 1890.

In 1904, Parliament created the Diocese of Southwark and the following year renamed St. Saviour’s to Southwark Cathedral (with its official name as the Cathedral and Collegiate Church of St. Saviour and St. Mary Overie). Like much of London, Southwark Cathedral did not escape the bombs of the London Blitz and sustained damage from shrapnel that is still visible on the outside of the church. More restoration and expansion took place in the 1990s to early 2000s, and in 2001, Nelson Mandela opened the northern cloister that includes a library, refectory, coffee shop, gift shop, conference centre, museum, education centre, and visitor centre. Both Mandela and Desmond Tutu have monuments in Southwark Cathedral today.

Moving further into the 21st Century, Southwark remains a working church and a daily place of worship for Londoners. In addition to a host of Sunday services, the cathedral hosts services for special groups throughout the week, so be sure to check the website for the best times to visit as a tourist or a worshipper.