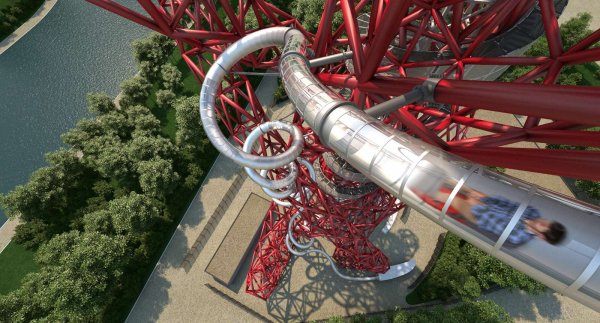 You may remember the Orbit sculpture that was built in the London Olympic Park as part of the London 2012 games. After the Olympics it was meant to be a centerpiece of the new Queen Elizabeth Olympic Park and attract tourists to visit.

Four years on, it turns out not many people want to trek all the way to a sculpture in East London just to get surrounding views of Stratford. Visitors have been very light to the attraction.

To spice things up, they’ve added a slide. In fact it’s the world’s longest slide.

According to the press people:

Visitors will descend the world’s highest and, at 178m, the world’s longest tunnel slide, as they travel down the UK’s tallest public artwork, they’ll pass through light and dark sections with London’s dramatic skyscape whizzing by!

In the 40-second trip, visitors will circle around the ArcelorMittal Orbit 12 times as they weave their way through the famous loops and curves of the iconic structure, including a tight corkscrew section names the ‘bettfeder’ – after the German word for ‘bedspring’ – and end with a 50m straight run back down to earth!

Sounds a little fun and may actually be worth the trip out there. It’s costs £15 for an adult and £10 for children. You’ll need to plan and book in advance and for the next few months it’s sure to be booked up.

Will it be the attraction to make the Orbit less of a White Elephant? Time will tell.

Here’s a video of someone going down the slide: