You are here: Home / Culture / Buildings / Seat of Power: 10 Interesting Facts and Figures about 10 Downing Street – The Home of the Prime Minister 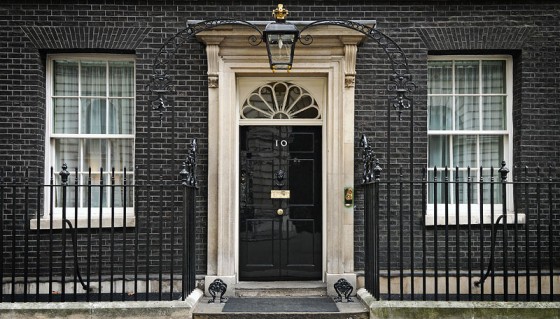 All the leadership of government in the United Kingdom can be represented by one place.  Much as the White House is the centerpiece for the head of America’s government, 10 Downing Street is both the home and workplace for the British Prime Minister.  Since the 18th Century, the three buildings that make up Number 10 have been the home for politicians and, eventually, the Prime Minister.  Today, it remains a place of history, power, and controversy, and as such, it is full of interesting facts that you may or may not know.

Perhaps the most famous door in the world, the one at Number 10 has at least three different copies.  Two of them rotate in use, while the third is located at the Imperial War Museum.  Originally made of oak, a 90s mortar attack from the IRA led to the fabrication of a reinforced, bomb-proof metal door.  It stays shiny both from the metal and a coat of glossy black paint.

Downing Street is named for Sir George Downing, who was the chief spy for Oliver Cromwell and was known by the title “Scoutmaster General”.  He was British Ambassador to The Hague at the time of Cromwell’s death, but as any good spy, he saw which way the wind was blowing and sided with King Charles II.  Downing purchased the land in Westminster in 1682 and built several homes with shallow foundations on marshy ground, an engineering oversight that would later cause Sir Winston Churchill to remark that the homes on Downing Street (including Number 10) were “shaky and lightly built by a profiteering contractor”.

Though it has one address, 10 Downing Street was originally comprised of three buildings:  a mansion overlooking St. James Park (also known as “The House in the Back”), a townhouse, and a cottage.  William Kent joined the three houses together in 1733 at the request of Sir Robert Walpole, the First Lord of the Treasury and advisor to King George II.  Altogether, the property has roughly 100 rooms.

The first person to live at 10 Downing Street after the Crown constructed the mansion in 1530 was Thomas Knevett, whose claim to fame was the arrest of Guy Fawkes.

Not a Personal Home

When King George II gifted Number 10 to Sir Robert Walpole, Sir Robert conditioned the gift on it being made to the First Lord of the Treasury rather than to him personally.  Eventually, this position merged with that of the Prime Minister, effectively making it the PM’s home.

Larry is a rescue cat that has been in residence at Number 10 since 2011.  Rescued from the Battersea Dogs and Cats Home, since his adoption, he has been installed as “Chief Mouser to the Cabinet Office”.  As with any member of the government, Larry has been subjected to some criticism for lacking “killer instinct”, he has also assisted in the nation’s foreign relations, going so far as to send President Obama’s dog Bo a chew toy in 2015.  While another government has yet to be formed, the Labour Party indicated that if it had won the general election, Larry would have kept his position, ensuring that Chief Mouser will remain a permanent post.

Is There a Surgeon in the House?

William Pitt the Younger chose to have a cyst removed there in Downing Street rather than go to a hospital.

Number 10 has always been known for its black exterior, but renovations to the building shortly after World War II uncovered that the bricks were actually yellow and had blacked over the years from a combination of soot and air pollution.  Rather than go back to the original colour, the bricks were painted black to be in keeping with everyone’s expectations.

10 Downing Street’s last private resident before it was gifted to Sir Robert Walpole was a man known only as “Mr. Chicken”.  No other information about him survives to the present.