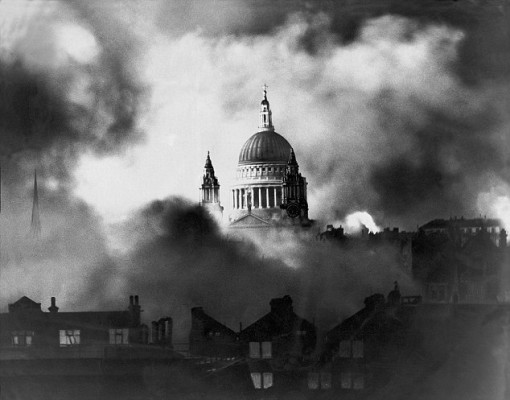 The towering church that sits on top of Ludgate Hill in the City of London is not the first place of worship to be located there. It’s actually the fifth. The first church located here was a wooden building built by King Ethelbert and consecrated by Mellitus, the Bishop of the East Saxons, in 604 A.D. Less than a century later, it burnt down in 675 under unknown circumstances, only to be rebuilt. The building would last until the 10th Century, when it was burnt down by Vikings.

Perhaps learning that wooden churches burn rather easily, the third St. Paul’s was constructed out of stone in 962. It would last little more than a century until another fire destroyed it, as well as much of the city, in 1087. The Normans set about constructing the fourth cathedral, which would become known as Old St. Paul’s. Yet another fire managed to disrupt the construction in 1136, and as a result, it was not finished and consecrated until 1240. What’s more, the architectural style changed from Romanesque to Gothic, a feature reflected in Old St. Paul’s pointed arches, the larger windows, and the ribbed vault.

Old St. Paul’s became a major centre of London life, perhaps sometimes to the chagrin of church officials charged with its upkeep. Trade and sports took place under its roof, and people would often use the north and south transepts as a thoroughfare. St. Paul’s Cross, a major feature of Old St. Paul’s, was an uncovered pulpit located on the grounds from which proclamations would be made and people would give speeches about religion or politics. However, it became seldom used by the 1630s, but remained on the grounds until 1642.

Under the Tudor Era, things became more unsettled as King Henry VIII broke from the Catholic Church to create the Anglican Church, initiating the dissolution of the monasteries and destroying many of Old St. Paul’s shrines and iconography. This marked the beginning of a particularly bad time for St. Paul’s, as lightning struck the cathedral spire in 1561, starting a fire that destroyed much of the spire and the roofs. While they were rebuilt, the rest of the cathedral started falling into disrepair, which was less of a concern to Oliver Cromwell’s government. It wasn’t until the Restoration in 1660 when King Charles II instructed for repairs to begin on St. Paul’s that anything was done, but unfortunately, it wouldn’t be too long until catastrophe struck.

On 2 September 1666, an oven fire that wasn’t completely put out managed to reignite in Thomas Farriner’s bakery on Pudding Lane. It quickly spread to neighboring houses and would carry on for four days until it had destroyed much of the City of London, including 13,200 homes, 87 parish churches, and Old St. Paul’s Cathedral. In a twist of cruel irony, the plans for the restoration of the cathedral had only been agreed to a week before the fire and the wooden scaffolding that had been erected helped to usher its demise.

It wouldn’t be too long after the fire had been put out that Sir Christopher Wren’s proposal for rebuilding much of the city, including St. Paul’s, was accepted. Already one of Britain’s best architects, many of his proposals for the new church, such as the dome on top, had been included for the pre-fire renovation plans. Construction began in 1675, the same year as Wren’s son, Christopher, was born. Even during construction, the new cathedral saw use, with the consecration taking place on 2 December 1697 and the first service there being a thanksgiving for peace between England and France. The new cathedral was completed in 1708 when Christopher Wren Jr. laid the last stone on the dome’s lantern in the presence of his father.

After this, the cathedral’s history was a pretty quiet one. King George I visited St. Paul’s in 1715, but after him, no monarch would visit the cathedral again for another seventy-four years, when his grandson, King George III, held a service in thanks for recovery from his temporary bout of madness. The cathedral became a burial place for many well-known persons, one of the first being its designer, Christopher Wren. Others buried there include Admiral Horatio Nelson, the Duke of Wellington, and Alexander Fleming. The cathedral would receive periodic upgrades and structural renovations through the early 20th Century.

The war was relatively kind to St. Paul’s Cathedral, and despite three bombs dropping on it during the London Blitz of World War II, the church remained in-tact. One bomb had managed to destroy the high altar while another left a hole above the crypt. The third bomb, a time-delayed explosive, managed to be diffused before it went off, saving St. Paul’s further damage. It was during the Blitz that one of the most famous images of the war was taken, of a defiant St. Paul’s Cathedral amidst the smoke of several burning fires caused by incendiary bombs dropped by the Luftwaffe. Entitled “St. Paul’s Survives” it was taken from the top of the Daily Mail building and the news article included an account of how the photograph was taken (see the picture at the top of this article).

St. Paul’s Cathedral has continued to be a historical landmark ever since. In 1964, Dr. Martin Luther King, Jr. stopped to give a speech on the west steps while on his way to accept his Nobel Peace Prize. His widow, Coretta Scott King, would later become the first woman to preach a sermon in the church. 1965 saw the state funeral of Sir Winston Churchill and his funeral would be the last for a former Prime Minister in St. Paul’s until Margaret Thatcher in 2013. In 1981, the cathedral was the site for Prince Charles’ wedding to Princess Diana. Meanwhile, Queen Elizabeth II held thanksgiving services for both her Diamond and Golden Jubilees in St. Paul’s. The victims of the terrorist attacks on 11 September 2001 and 7 July 2005 were honoured there as well. The great history and importance of St. Paul’s Cathedral ensures that it will continue to be a major historical location for years to come.