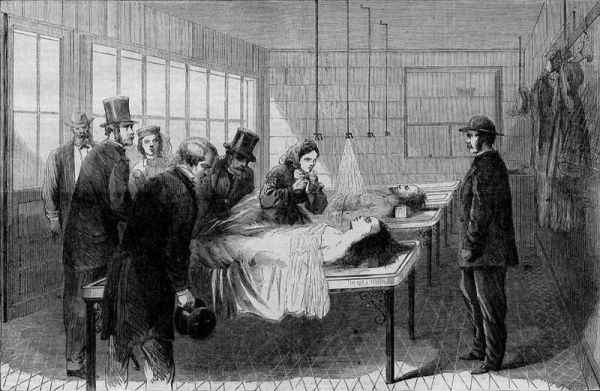 Something strange happens, a rumour spreads, and as it grows, a new urban legend is born. Urban legends are contemporary tales filled with humour, horror, or rampant speculations with little to no supporting evidence. London is no stranger to these modern myths and I have written about the Victorian legend of Spring-heel Jack previously. Here five of the city’s other urban legends, from the Victorian period into the present day.

In 1862, Hugh Pilkington, MP, was attacked, mugged, and possibly choked. From this came an urban legend that gangs of vicious criminals were wandering the streets garroting any unfortunate soul who just so happened to cross their path. The legend was, in part, the result of sensational news articles reporting the end of transportation to Australia and activities of “ticket-of-leave” men (offenders out on provisional license), and the ineffectiveness of reform programmes. The clamour was so much that Parliament passed the Garrotters Act in 1863 that reintroduced corporal punishment to violent or armed robbery. The next year it passed the Penal Servitude Act, which made it mandatory for police to supervise ticket-of-leave men. No other actual instances of garroting were reported despite all the noise.

The legend goes that in the early 1900s, there was a train that went from the Royal London Hospital in Whitechapel to a mysterious location. Moving along the tracks of its special tube line, while it carried passengers, it did not transport a single living soul. The late 19th and early 20th centuries still saw problems with sanitation and disease within a congested city such as London, and oftentimes the hospitals, morgues, and burial parlours were unable to accommodate the large amount of deceased persons. While the legend told of a train that transported these bodies from the hospital to an unknown place, little evidence has been found to support the train’s existence and other evidence suggesting it has been disproved.

Every major city seems to suffer from some gigantic animals that live in the sewers, at least, according to urban legends. For New York, it’s alligators or R.U.O.S.s and for London, it’s pigs. The legend went that pigs released into the sewers had grown monstrous and would one day free themselves to run amok in London above and make us pay for our love of bacon. While the origins are unclear, it seems a story about a sow getting into the sewer transformed into a whole army of swine trapped below. Of course, there’s no evidence to support anything like this having happened.

Modern urban legends have the help of social media, which people will often believe over common sense. A story began circulating that construction companies building some of the most expensive homes in London during the 1990s would leave the JCB diggers behind after excavating the land for the home’s foundation. “Property experts” even estimated that there were up to 1,000 of them buried in the subterranean levels of London. Actual builders of course, said that this was ludicrous and only occurs with very deep and long tunnel jobs such as building the Chunnel, the Underground, or Crossrail.

The press was certainly responsible for a few whoppers meant to sell papers. One reported that a civil servant had seen a man who looked exactly like himself on the other side of Tavistock Square every evening as he walked home from work. When he gave chase to the man, who would round the corner and the doppelganger was gone. Another woman claimed to have seen a vision of her sister at Russell Square as the woman was dying. These stories are nothing new at all. The theory is that, with more and more people flocking to London and crowds on an unprecedented scale, people were bound to see others in the crowd who looked like someone they knew.