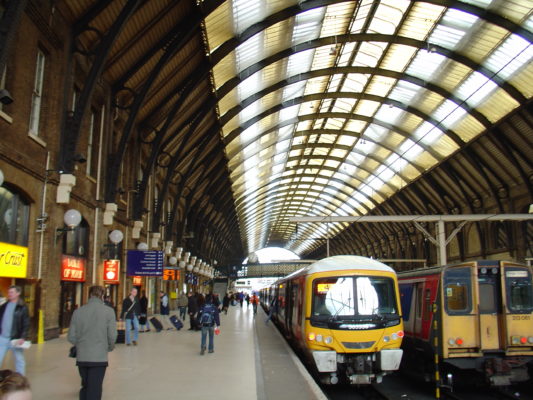 Known to most people outside London as the home of Harry Potter’s Platform 9 3/4, King’s Cross Station is a historic railway station in the heart of the city.  The southern terminus of the East Coast Main Line that runs up to North East England and terminates in Scotland.  Long before being known as the hub for railway transport, the King’s Cross area was known for a different kind of transport as it was a crossing point for the River Fleet.  Prior to its renaming, the area was known as “Battle Bridge” and featured one of the final battles between Roman forces and the Celtic Iceni tribe led by Boudica.  Lore has it that this was Boudica’s final battle as well and she is buried under one of the station’s platforms.

Development of King’s Cross began in 1756 with the construction of Euston Road (known as “The New Road” until the mid-19th Century), which led to the building of two-story terraced homes and a couple of hospitals.  The construction of Regent’s Canal in 1820 further developed the neighbourhood by providing another link between the South and the industrial North, further transforming King’s Cross into an economic and transportation hub for London.  It was the erection of a statue to King George IV at the Battle Bridge crossroads in 1830 that gave the borough its name.  While the statue was later demolished, the name King’s Cross stuck. 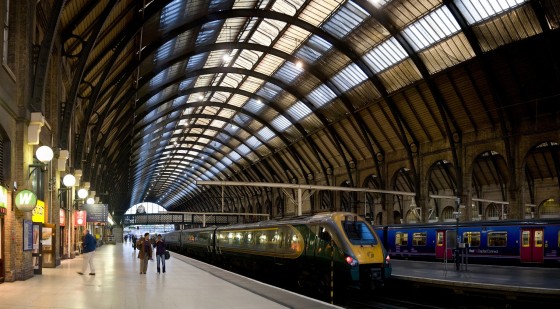 The Great Northern Railway would provide a lasting positive change to King’s Cross.  Construction on the southern terminus began in 1849, as GNR purchased the land where the station is presently located because of its proximity to Regent’s Canal.  A temporary station was constructed at Maiden Lane in 1850 and work on the permanent King’s Cross Station began in 1851.  Lewis Cubitt designed the station along with Sir William Cubit, the latter of whom had built the Crystal Palace in 1851 and was a consulting engineer on the Great Southern Railway.  Their design had two arched train sheds with a brick edifice at the south side to mirror the sheds inside the station.  Its main exterior feature was the clock tower topping off at 112 feet and containing tenor, treble, and bass bells.

When it was finished in 1852, it had two platforms (still there today as Platforms 1 and 8) with the space in-between used for carriage sidings.  The station became an immediate hit for suburban commuters, and in 1862 it was linked with the Metropolitan Railway to the London, Chatham and Dover Railway.  Another station west of the main building (containing what would later be Platforms 9 through 11) would open 1875 known as the King’s Cross Main Local Station.  At least half of the station traffic by 1180 was suburban, and Platforms 5 and six were then added in 1893 to meet the ever-increasing demand.

King’s Cross Station was purchased by the London and North Eastern Railway in 1921, and they made subsequent refurbishments to modernise the station’s amenities.  During both World War I and World War II, the station saw quite a bit of traffic from soldiers deploying to the front as well as children being sent off to the countryside.  Further platforms were added, leading to a total of fourteen, that were numbered officially in 1972, with Platforms 1-8 in the main building and 9-14 on the side building.  1987 saw the station’s worst disaster with the King’s Cross Fire that began on a wooden escalator and ultimately led to the deaths of 31 people.  Along with the rest of British Rail, King’s Cross Station was privatised in 1996, and the Great North Eastern Railway took over, leading to a restoration of the station in 2007 and a radical new design for the concourse area that would ultimately cost about £500 million.

Completed in 2012, King’s Cross Station’s new concourse included the restoration and reglazing of the main train shed, as well as removing the 1972 extension at the front of the station and replacing it with an open-air concourse.  The concourse now features what its architect, John McAslan, believes is the longest single-span station structure in Europe with a semi-circular radius of 59 yards and over 2,000 triangular roof panels.  In 2013, the restoration project won the European Union Prize for Cultural Heritage/Europa Nostra Award. 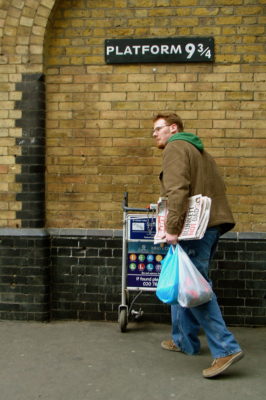 The station was immortalised in J.K. Rowling’s Harry Potter and the Philosopher’s Stone as the location of Platform 9 3/4, a platform reached through a magical portal from which the Hogwarts Express would take wizarding students off to the famous school.  It’s believed that Rowling was thinking of nearby Euston Station when she initially wrote the scene, as Platforms 9 and 10 are in a separate building from the main station.  Nonetheless, the station was still used for filming when the cinematic adaptations began, specifically using the space between Platforms 4 and 5.  Today, the station has constructed a spot for Potter fans to take photos in a passageway that connects the main station to the Platforms 9-11 annexe.  Initially just a sign, the area now includes a trolley disappearing into the wall and a nearby Harry Potter shop.

Today, King’s Cross Station is still a constant hub of activity.  The station sees over 50 million commuters per year, owing in part to it serving more Underground lines than any other station in London.  Whether you’re there to take a photo at Platform 9 3/4, catch a Tube train to another part of the city, or venture beyond London, King’s Cross Station is a must-visit location in the city.