You are here: Home / Culture / Buildings / Great London Buildings: The Guildhall – The City of London’s Centre of Power 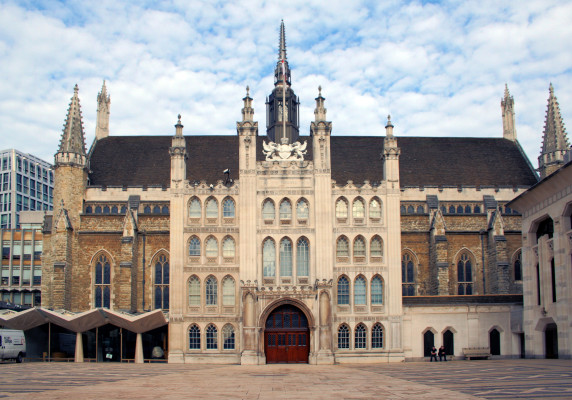 Since Medieval times, the Guildhall in London has been an actual and ceremonial centre for the City of London and its Corporation.  Even before the current building that sits near Gresham and Basinghall streets, a Roman amphitheatre existed on the site and previous guildhall buildings served the Saxons.  A previous guildhall existed on the same site in the 12th Century with the original foundation believed to have been constructed between 1120 and 1130.   A crypt was constructed underneath in the 13th Century that helped become the foundation of the current Guildhall.

The elegant building that currently represents the City of London began construction in 1411.  Completed in 1440, it was largely built by mason John Croxtone and, over 800 years later, it is the only non-ecclesiastical stone building of that era to survive.  By the 15th Century, the Lord Mayor of London and the ruling merchant class held enough power to rival that of the king within the city.  As such, they decided that a new Guildhall was necessary that could house the offices for London’s municipal government, the Court of Common Council, the Sheriff of London, and the Lord Mayor. 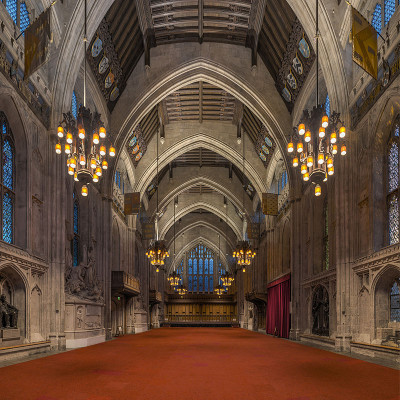 Once completed, the Guildhall was the third-largest such structure in England, after Westminster Hall and the Great Hall of the Archbishop’s Palace in Canterbury.  The Great Hall inside the structure was and still is the meeting place for the Court of Common Council, which is the City of London’s legislative body.  It was also the site of many trials over the centuries.  Anne Askew was tried there for Heresy in 1546, as was Henry Howard, whom King Henry VIII believed was plotting against him and had Howard executed in 1547.  Lady Jane Grey and her husband, Lord Guilford Dudley, were both tried there for high treason along with Archbishop Thomas Cranmer by Queen Mary I in 1553.

In the next century, the Guildhall was one of many London buildings not spared by the Great Fire, though it was fortunate enough that its stone permitted the walls to survive.  The rest of the interior was rebuilt and the building was enlarged.  The interior contains many monuments to famous Britons, including Admiral Nelson, William Pitt the Elder, William Pitt the Younger, the Duke of Wellington, Lord Mayor William Beckford, and Winston Churchill.  The Guildhall added a minstrel’s gallery in 1862 that included statues of Gog and Magog, who in British mythology are the protectors of London, giants who were defeated by Brutus and Cornelius and then chained to the walls of the palace that stood on the Guildhall’s site to act as its guardians.

An earlier version of the statues were destroyed during the Great Fire and the ones in 1862 were meant to replace them.  However, the replacement statues were destroyed during the London Blitz along with other parts of the hall, such as the roof.  The hall’s roof has been replace or repaired at least four times over its history, with the last following the German bombing of the city.  The windows were also restored after the Blitz and bear the names of all the previous Lord Mayors.  The windows also bear the arms of England, London, and the city’s twelve livery companies, including:  Mercers, Drapers, Fishmongers, Goldsmiths, Skinners, Merchant Tailors, Haberdashers, Salters, Ironmongers, Vinters, and Clothworkers.

Today, the Guildhall still acts as the government centre for the City of London.  Grade I listed, it also provides a venue for important ceremonies, dinners, and events.  The west wing, constructed in 1974, is the most modern part of the building and contains a bookshop, museum, and the Guildhall Library, which houses the corporation’s art collection.  No matter the reason for your visit, you can experience history and see one of the oldest city governments in action here.