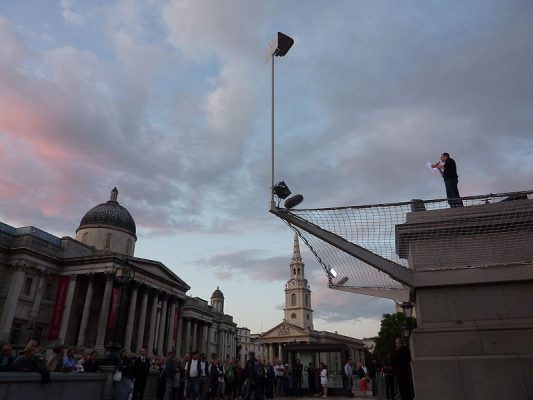 Every year, Trafalgar Square’s fourth plinth sees a new statue set up, giving tourists taking in some of the top city break destinations in London the opportunity to take a look at a different – and ever-changing – side of the capital, while allowing up-and-coming artists to get their voice heard in this busy metropolis.

Not only does this position in the north-west of the square give the creator and subject the focus of the public’s eye for 12 months, but it also shines a light on to the message that is being conveyed by the statue.

So, which are the most influential fourth plinths in history?

Child on a rocking horse

The monument of a bronze child on a rocking horse, unveiled in February 2012, could have a significance and meaning that could speak volumes for the year ahead.

Designed by Scandinavian artist duo Elmgreen & Dragset, the Powerless Structures piece represents a future to have hope for. The boy riding the horse gives the impression of a historical hero, while the childlike features remind spectators of his future and promise.

In a year in which London faces a difficult economic climate and the much-awaited Olympic Games, this plinth could lift the spirits of those in the capital and have particular significance for the city for years to come.

Anthony Gormley’s One & Other

2009 saw one of the most innovative ideas for the fourth plinth realised, with Anthony Gormley’s One & Other living monument.

Every 24 hours for 100 days people from all over the country stood on top of the plinth as its living statue. This was meant to symbolise the different faces of London and the UK, in an attempt to represent all of humanity and the many cultures found in Britain.

This unique idea is likely to ensure that Gormley will go down in history for his take on Trafalgar Square’s fourth plinth – and was bound to have caught plenty of people’s eyes as they walked past these living statues.

One fourth plinth that has been engrained in the minds of many people – including those who live in London, as well as ones who love to visit the capital – is Marc Quinn’s giant statue of disabled, pregnant artist Alison Lapper.

The marble monument was 12 ft tall and was meant to make the point that disabled people are not represented enough in art.

It took Quinn ten months to complete the statue, but it was worth it in the end, as it stood in its place between September 2005 and October 2007.

This considerable amount of display time owes to the significance of the statue, with Quinn highlighting gaps in modern art, as well as addressing the different people found in London’s – and by extension Britain’s – communities.

There have been many other influential fourth plinths over the years, from Nelson’s Ship in a Bottle by Yinka Shonibare in 2010 to the 2007 Hotel for the Birds by Thomas Schutte.

However, the three we have gone into detail here are among our favourites – not only for the talent that went into creating them, showing the impressive skills of British artists, but also for what they represent about our capital city and society.

What are your favourite fourth plinths of all time? Leave a comment and let us know!