You are here: Home / Culture / Art / Great London Art: The Burning of the Houses of Lords and Commons by Joseph Mallord William Turner 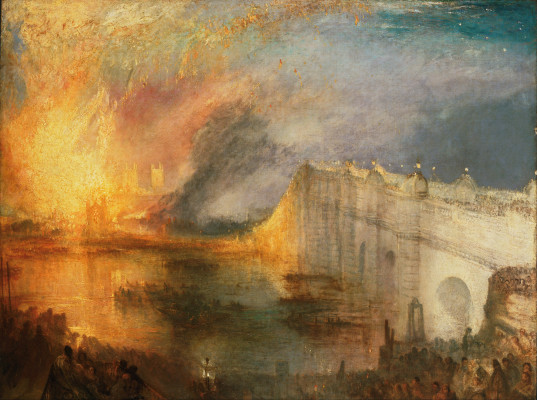 The Burning of the Houses of Lords and Commons is the title of two oil on canvas paintings by J. M. W. Turner, depicting the fire that broke out at the Houses of Parliament on the evening of 16 October 1834. Turner himself witnessed the Burning of Parliament from the south bank of the River Thames, opposite Westminster. He made sketches using both pencil and watercolour in two sketchbooks from different vantage points, including from a rented boat, although it is unclear that the sketches were made instantly, en plein air. The sketchbooks were left by Turner to the National Gallery as part of the Turner Bequest and are now held by the Tate Gallery.

The paintings were made in late 1834 or early 1835 and both measure 92.1 centimetres (36.3 in) by 123.2 centimetres (48.5 in). Turner spent many hours reworking both paintings on the varnishing day immediately before the exhibition opened to the public.

The first painting, exhibited at the British Institution in February 1835, shows the Houses of Parliament from the upstream side of Westminster Bridge. The buildings on the other side of the river are wreathed in golden flames. The fire is consuming the chamber of the House of Commons in St Stephen’s Hall, and illuminating the towers of Westminster Abbey. The fire reflects dull red in the water, with a crowd of spectators in the foreground. To the right of the painting, Westminster Bridge looms like an iceberg, larger than life, but the perspective of the part of the bridge closest to the far bank is strongly distorted where it is lit up by the flames. The painting was acquired by the Philadelphia Museum of Art in 1928 as part of the John Howard McFadden Collection. 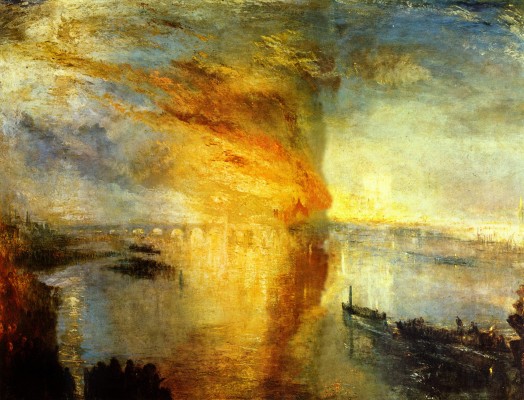 The second painting was exhibited at the Royal Academy summer exhibition later in 1835. It shows a similar scene from further downstream, closer to Waterloo Bridge, with the flames and smoke blown dramatically over a river as spectators on the river bank and in boats look on. This painting was acquired by the Cleveland Museum of Art in 1942 as a bequest from John L. Severance (son of oil magnate Louis Severance).