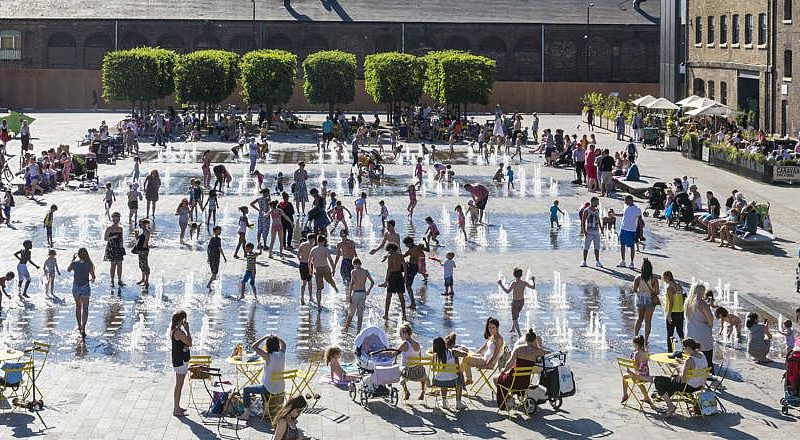 Sure, London summers don’t get as hot as they do in the United States, but you’d be surprised how warm it can get.  Temperatures in the 70s might seem pretty cool to us, but it’s a little toasty for the average Londoner.  If you want to experience summer the way the locals do, there are plenty of opportunities to cool off throughout Greater London.  Whether you’re chowing down on ice-cold treats, running through water, or finding the coldest spots in the city, here are five ways to cool down during a London summer.

Ice cream is the snack of summer, and there are plenty of options for this sweet treat throughout London.  Whether you grab a Cornetto from Sainsbury’s or go out to find some of the best ice cream parlors in the city, there are plenty of great ice cream options.  You can try the nitrogen ice cream at Four Winters, gelato at La Gelateria, Filipino Mamasons at Mamasons Dirty Ice Cream, Ice Cream Sandwiches at Yolkin, vegan ice cream at Black Milq, and more.  No matter what your taste is, you’ll find ice cream to cool your taste buds.

Running through water at a water park is a great past time in the United States, but in London you can run through the Granary Square Fountains by King’s Cross and even play a game with them.  In addition to the 1,080 coordinated jets that dance and even light up, the fountains have an app that will let you play a real-world version of the computer game Snake.  Additionally, the square hosts any number of events throughout the summer, including concerts and street markets.

What we think of as a public pool, there are several outdoor and indoor lidos throughout the city that will give you the chance to cool off and go for a swim.  One of the best lidos in London is Tooting Bec, which is also the largest public pool in the city at 90 meters long.  If you’re looking for a more natural swimming experience, Hampstead Heath has swimming ponds that were made from dammed off clay pits.  The temperature in the ponds is a good bit colder and are separated into men’s and women’s ponds during the summer.

Ice bars are a popular (though cold) place to drink, but many of them are little more than pop-ups or seasonal drinking establishments.  Belowzero bills itself as the only *permanent* ice bar in London, but it’s a perfect place for drinks during the summer.  The inside of the bar maintains a constant -5 degrees Celsius (23 degrees Fahrenheit) and provides parkas for its patrons, but you might want to dress appropriately anyway.  Once you get tired of the cold, you can visit the non-icy parts of the bar that include food and Tiki-style cocktails.

If you don’t want to get as cold as you would at Belowzero, you can go underground to the Chislehurst Caves.  The caves are actually a series of man-made tunnels and caverns that began over 8,000 years ago and were mined for flint and lime until the 1830s.  Today, visitors can take a guided tour of Chislehurst Caves where they will be regaled with tales of Druids, Romans, and even the likes of David Bowie and Jimi Hendrix who once performed here.  The tours last for forty-five minutes as the guides take you through more than twenty miles of underground history.  Tours go from 10 AM to 4 PM from Wednesday to Sunday, and the ticket price is £5 for adults and £4 for children over 5 (younger children can enter for free).