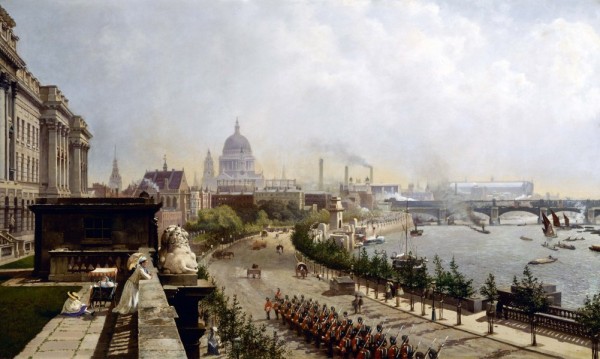 John O’Connor painted this view of the Victoria Embankment shortly after it was completed in 1872. The painting looks east from the terrace of Somerset House towards the City and St. Paul’s Cathedral.

A woman with a parasol and two children bask in the sunlight on the terrace, while a regiment of Grenadiers march along the road below. In the distance, smoke can be seen issuing from chimneys, trains and boats and Blackfriars Bridge stretches across to the right.

Work began on the new Embankment scheme, designed by Joseph Bazalgette, in 1864 but it took years to complete. A total of thirty-seven acres were claimed from the river and the project was considered to be one of the engineering feats of the period.

O’Connor came to London in 1848 where he worked as a scene painter at both Drury Lane Theatre and Haymarket Theatre. During the course of his career, he depicted topographical subjects and royal ceremonies. This is one of several paintings by him of views of London in the Museum’s collection.

A study for this painting, which was displayed at the Royal Academy in 1874, was engraved by Henry Adlard and published in ‘The Stationers Almanac’.