You are here: Home / Travel / Airports / London’s Other Airport: 10 Interesting Facts and Figures about Gatwick Airport 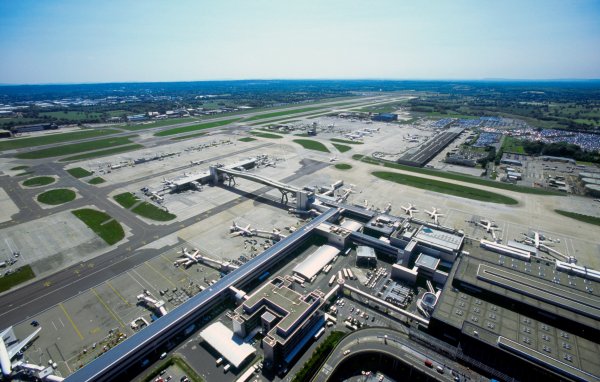 It feels like Heathrow gets all the attention, but London’s Gatwick Airport certainly has its own prestige. Existing first as an aerodrome in the 1920s, the Air Ministry approved Gatwick for commercial flights in 1933 and the first terminal was built in 1935. From these humble beginnings, Gatwick has built itself up into a major airport for the city and serves as the hub for British Airways. Now celebrating its 80th anniversary, Gatwick Airport is full of facts in its terminals, on its runways, and in the friendly skies above it.

The name Gatwick was first recorded in 1241 as “Gatwik” and was a manor in the village of Charlwood in Surrey that sat where the northern edge of the North Terminal taxiing area is today. “Gatwik” is comprised of the Old English words “Gat” (or “goat”) and “wik” (“farm”), so the name means, essentially, “goat farm”.

By Gatwick’s own numbers, the airport sees approximately 38 million passengers pass through it each year heading to over 200 destinations in 90 countries from 45 different airlines. As such, Gatwick flies to more destinations than any other UK airport. Additionally, 20% of the air traffic at Gatwick are charter flights, also making it the largest charter airport in Britain.

The airport’s first terminal was completed in 1935 and got the nickname “The Beehive” for its circular structure, rings, and the fact that the terminal housed all necessary functions under a single structure. By integrating all the airport’s roles into one building, Gatwick was recognized as the first airport in Europe to structure itself in this way. Expansion in the 50s for the airport as we know it today made the Beehive obsolete and today, the Bland Group rents out office space inside it.

Gatwick has parking spaces for 27,000 cars. On the busiest day of 2003, the 16th of August, 134,527 passengers created more demand on parking than the airport could handle.

The first commercial flight from Gatwick departed the airport for Paris on the 17th of May, 1936. A single ticket, including the train ride from Victoria Station, cost only £4 and 5 shillings. To compare, that same cost today would be £160.22.

Prior to the opening of the aerodrome (and even after), Gatwick had a race course that opened in 1891. It was used in this manner until 1940 and even hosted the Grand National from 1916 to 1918.

Built, in part, to help alleviate congestion at Heathrow in the 1950s, the new London airport was a rousing success. Within the first six months, Gatwick had 186,172 passengers. By 1959, annual passenger numbers were at 368,000. Only 8 years later, the number of passengers flying into and out of Gatwick hit 2 million. Today, the airport covers 1,687 acres and is as large as a medium-sized town.

One of the airport’s odder traditions has it that, following an airplane’s first flight into Gatwick, the fire service sprays the plane down with water. You can guarantee with its one runway, Gatwick is possibly the busiest runway in the world.