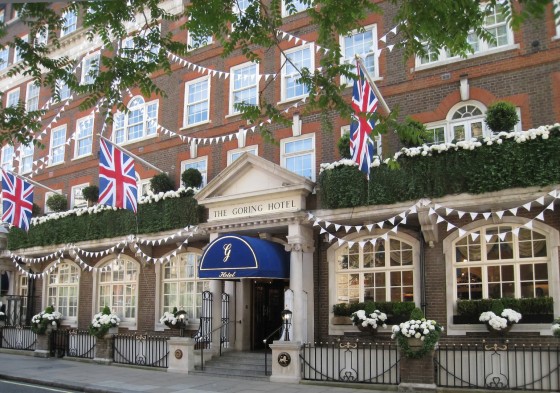 The Goring Hotel was made world famous back in 2011 when the Duchess of Cambridge stayed there the night before her wedding. As the Diamond Jubilee year drew to a close, it was announced that The Goring was to receive a Royal Warrant of appointment to HM The Queen for Hospitality Services.

Jeremy Goring, whose family built the Belgravia hotel over 100 years ago, said:

“We are hugely honoured to have been appointed a Royal Warrant holder by The Queen. To be able to display Her Majesty’s coat of arms is something that the staff will be enormously proud of. Without doubt this is the most important recognition their work could ever receive. It is made all the more special for us because I believe this is the first Royal Warrant The Queen has ever granted to an hotel.”

The Goring family continues to run the hotel 103 years after it was built by Jeremy’s great grandfather in 1910. Throughout that time it has continued to provide some of the very highest levels of hospitality to be found anywhere in the world. This 69 bedroom hotel employs over 160 of London’s best hotel staff to take care of guests’ every need. Located in Belgravia it is well placed for theatre visits and dining in the famous restaurants of the West End or the shopping in Knightsbridge to the east.

Over the past five years the family has invested in the refurbishment of the whole hotel. Luxurious silks have been woven by Gainsborough Silks (also a Royal Warrant holder) for the walls of the bedrooms designed by Russell Sage. Linley has redesigned the Dining Room creating bespoke furniture as well as immense walnut columns juxtaposed by the (now notorious) Swarovski Blossom Chandeliers.

The Goring has welcomed Royal guests since it first opened its doors. The Coronations of George VI and our present Queen saw the hotel filled with foreign royalty attending these great occasions. In 2011 The Duchess of Cambridge famously stayed at the hotel the night prior to her wedding, leaving for Westminster Abbey on the morning of the 29th April. Receiving the Royal Warrant from The Queen marks the high point of these long associations.