You are here: Home / Londonism / Royal London / On Her Majesty’s Appointment – Shops in London that Serve the Royal Family 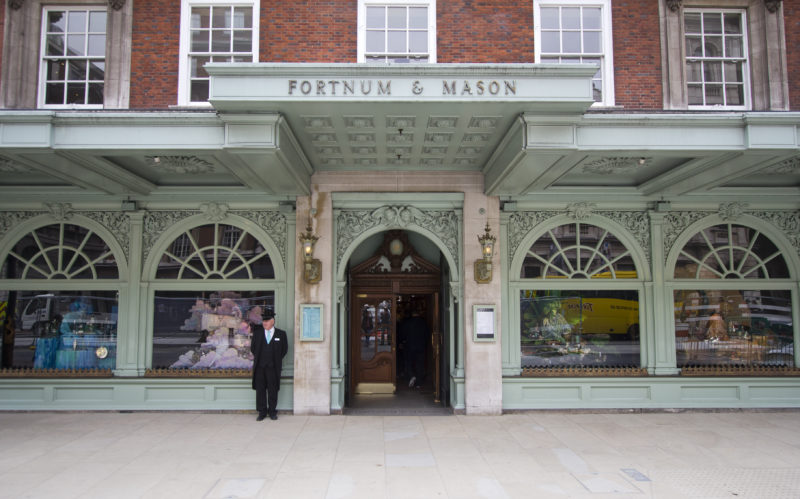 A Royal Warrant of Appointment is a special designation to merchants granting them the ability to announce to the world that they sell goods or services to the Royal Family.  These warrants may be given out by the Royal Family as a whole or by individual members, specifically the Queen, the Duke of Edinburgh, and the Prince of Wales.  Unsurprisingly as London is the central base of the Royal Family, many shops within the city carry a Royal Warrant from one of the three or all of them.  If you want to shop like a royal, have a look at the list below and consider visiting one of these shops on your next trip to London.

One of the most well-known warrant holders in London is Fortnum & Mason, a place that started as a tea shop before expanding into all manner of food and beverages.  They’re perhaps best known for their luxury hampers, which are perfect for taking to a picnic in the park.

Smythson has a Royal Warrant from the Duke of Edinburgh for stationary, printing, and calligraphy.  The businesses was originally founded for its leather goods in 1864.

A clothing supplier located on St. Martin’s Courtyard, J Barbour and Sons has been supplying Queen Elizabeth with waterproof and protective clothing for Her Majesty since 1974.  The company offered to make her a new style for her Diamond Jubilee, but she reportedly said she preferred her old style still.

It might not be the most glamorous option on the list, but sometimes the Royals like to shop at the same places as everyone else.  Waitrose is a grocery store chain in the United Kingdom that has Royal Warrants for both the Queen and the Prince of Wales.  The Duchess of Cambridge has even been spotted there on occasion.

Oftentimes if you’ve seen a picture of the Queen in public, she’s almost always sporting a Launer handbag.  The shop can be found on Regent Street and is perfectly happy to sell a stylish handbag or two to any member of the public.

Of course, not everything the royals purchase is expensive.  For £20, you can buy the same umbrella that the Royals use from the shop on Premier Park Road.  Of course, if that one’s not really your fancy, you can find plenty of other styles that would suit anyone at a reasonable price.

If you want your wellies to be as fashionable as Her Majesty’s, Hunter Boot Ltd. offers its footwear at their stop on Regent Street in Mayfair.

If you want to buy some jewelry fit for the queen in your life, jewelers Cartier holds a Royal Warrant with the Prince of Wales and has locations throughout London, including on Old Bond St, New Bond St, and in Selfridges.  The last of these options is one of the most interesting as it will give you the opportunity to shop plenty of other wonderful brands.

You won’t have to guess too hard where this shop is located, Anello & Davide on St. Albans Grove is mostly known for making ballet shoes and theatrical footwear.  The shop is also responsible for creating the “Beatle boot” in the 1960s and has held a Royal Warrant for the Queen’s footwear since 2001 and her mother before that.  The company makes two pairs of shoes for her per year as well as repairing and resoling her older pairs.