You are here: Home / Travel / Attractions / London Eye: 10 Interesting Facts and Figures about the London Eye You Might Not Know 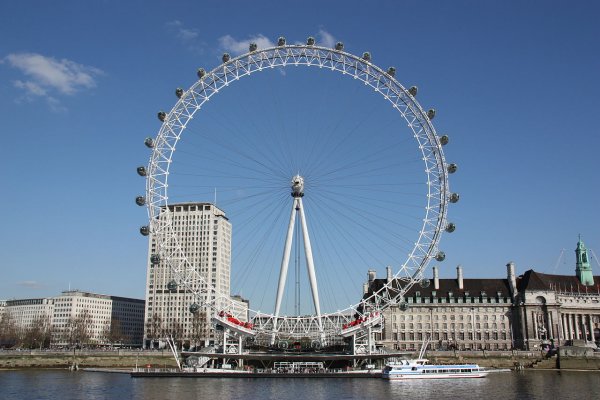 One of London’s premiere attractions, the Ferris Wheel known as the London Eye is as recognisable against the London skyline as Tower Bridge or the Shard. Located on the South Bank of the Thames in Lambeth, right across from Westminster, it has plenty of famous neighbors, including the Palace of Westminster, Big Ben, Westminster Bridge, and St. Thomas Hospital. There are many interesting facts about the London Eye and we at Londontopia are here to tell you some things you may not know about this great landmark.

At 394 feet in diameter, you can see twenty-five miles in any direction from the Eye’s capsules. On a clear day, you can even see Windsor Castle. It’s one of the highest views in the city, with the Shard’s viewing platforms taking the top honour.

There are thirty-two capsules on the London Eye, which is one for each London borough. For superstitious reasons, they’re actually numbered 1-33 (since they skip number 13). Each capsule weights as much as 1,052,631 pound coins.

Three-and-a-half million people visit the London Eye every year, including both tourists and Londoners. This is more people than visit either the Taj Mahal or the Great Pyramids of Giza. The Eye can carry 800 people on every rotation. Kate Moss has been on the Eye a total of 25 times (as of this writing), making her the celebrity that’s ridden it most.

Best in the World

The Eye was designed by some of the world’s leading architects, including David Marks, Mark Sparrowhawk, and Julia Barfield. For twelve years, from 2000-2012, it won thirty awards in such categories as best ride, best attraction, design, experience, and so on.

Not a Ferris Wheel

At least, not it’s official classification. The London Eye is actually what’s known as a cantilevered observation wheel. Meaning that there is a long projected beam at one end, fixed to the ground, around which the wheel rotates. A normal Ferris Wheel has projected beams on both sides to give it support.

The London Eye makes one revolution every thirty minutes, meaning that each capsule moves at 26 cm per second, or 0.6 miles per hour. It actually doesn’t stop to let people on and off, it just moves so slowly that people can easily get in and out without missing their capsule. Of course, the important thing about that is that is moves so slowly to give you the best view of London.

The Eye has certainly made itself culturally identifiable with London. It is a focal point for the city’s New Year’s fireworks display. It was lit up red, white, and blue for the marriage of Prince William and Kate Middleton. In 2005, it was lit pink to celebrate the first civil partnership performed on the attraction. It also features prominently in many TV programmes and films, including having a major role in the first episode of Doctor Who’s modern era.

It’s Not the First

London actually had another Ferris Wheel before the Eye known as the Great Wheel. It was built in 1895 and ran from that time until 1906, after which it was demolished in 1907. It was used by over 2 million people, which is 1.5 million less than visit the London Eye every year.

For a special treat, you can reserve a private VIP capsule that grants you early boarding and a chance to have a flute of champagne while you “fly” with the London Eye.

Love is in the Air

As a very special treat for couples, the London Eye is kept open on the night of Valentine’s Day so that couples can take advantage of its romantic views.