You are here: Home / Site News / Featured / London Icon: 10 Interesting Facts and Figures about the Iconic Routemaster You Might Not Know 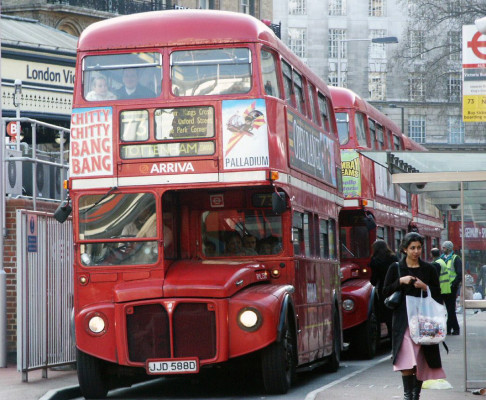 The Routemaster bus is one of the most iconic parts of London that isn’t fixed to the ground. Like the black cab, it’s immediately identifiable with the city and even today influences the look of new buses that move through London’s streets. Premiering in 1954 and in production until 1968, these incredibly sturdy vehicles outlasted many of their successors and (with some upgrades) are still running today for tours and other organisations. While the New Routemaster has taken on its predecessor’s responsibilities, there’s still plenty of love for the old girl and many interesting facts about this transportation icon.

Over a fourteen year period, Associated Equipment Company built 2,876 Routemaster buses. As stated above, they proved to be incredibly resilient and long-lived, and today there are 1,280 still in existence (though some survive more as museum pieces).

The Routemaster was designed to replace the old trolley buses, which had served London for over 30 years along 68 routes that were powered by overhead electrical wires. The original diesel buses were ordered in 1935, but with the onset of the war, production did not pick up again until 1947. The first prototype came out in 1954 and the first Routemaster saw service in 1956. The Routemaster itself was not replaced until the New Routemaster in 2012.

If you see a Green Routemaster, your eyes aren’t deceiving you. It’s still owned by London Transport and serves their country division.

Prior to 1907, the colour of a bus actually determined which route it followed. London General Omnibus Company wanted to make their buses stand out against the fierce competition for service, so they painted their entire fleet red. Some predictable confusion led the Metropolitan Police to suggest that LGOC add numbers to its buses to identify their routes. The Underground Group purchased LGOC in 1912, which later became part of the London Passenger Transport Board in 1933, shortened later to “London Transport”. 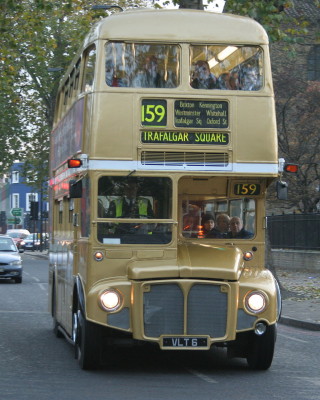 In keeping with Her Majesty Queen Elizabeth II’s silver and golden jubilees, some Routemasters were repainted in those colours in 1977 and 2002, respectively.

Allegedly, a ghostly Routemaster Number 7 drives up the middle of the street in Cambridge Gardens with no lights, no passengers, and no driver! It was last spotted in 1990.

One of the most popular features of the original Routemaster was its rear platform that made it easy to board and alight the bus, even while it was moving. A rear conductor would stand on the platform to help people on board and take their tickets or fees, but eventually the job was phased out. However, the convenience of the rear platform wasn’t without some danger, and in 2013, former Mayor of London Ken Livingstone revealed to ITV that approximately twelve people per year died from falling off the platform during his time in office.

The famous Night Bus from Harry Potter, which was first seen on film in the adaptation of Harry Potter and the Prisoner of Azkaban, was not actually made from a Routemaster. Instead, it was constructed out of three Regent III RT buses. The Regent III was the immediate predecessor to the Routemaster and ran from 1939 to 1979.

While many of the original Routemasters have been taken out of service, there are still a couple operating on heritage routes that are still available to passengers. Route 9 travels from Kensington High Street to Aldwych while Route 15 travels from Trafalgar Square to Tower Hill.

In 2009, three ladies named Linda, Mary, and Jo opted to use their Freedom Pass (available to people over 60 years old) to ride every route in numerical order. They completed their task nearly five years later and since March, 2014, have set their attention to visiting every single museum in London.