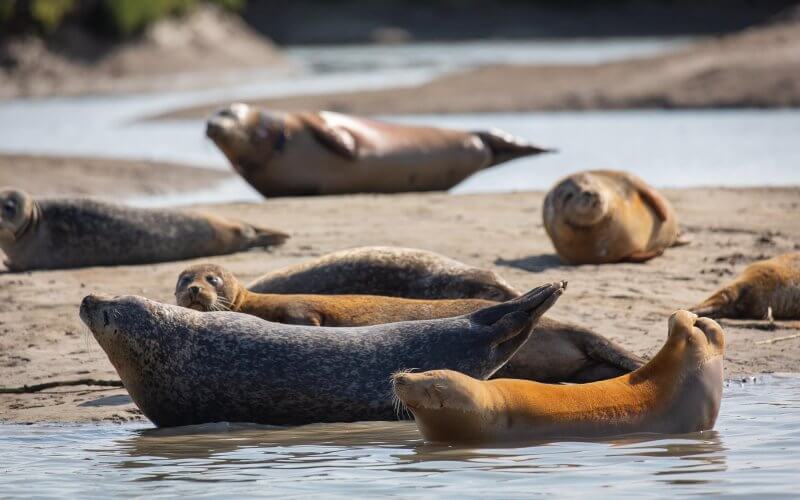 The Thames’ healthy seal population is proof the river is teeming with life, conservationists have said, despite a dip in numbers over the past two years.

A team of researchers from the Zoological Society of London (ZSL) found the river was home to 2,866 grey seals and 797 harbor seals following the most recent pupping season.

Apart from 2020, when the survey was paused due to the pandemic, the seals have been counted every year since 2013.

One of the Thames’ apex predators, the mammals, are used by marine biologists as a barometer of the health of the river, with stable numbers indicating good water quality and reliable stocks of fish.

Although they are a protected species, they face a number of threats, including disease, marine litter, becoming entangled in “ghost nets” – abandoned fishing gear – and being hit by ship traffic.

The seals are also vulnerable to disturbance when they are having their pups, particularly from curious members of the public, loose dogs, and other water users like canoeists and kayakers.

In 2002, the population was badly hit by an outbreak of distemper virus, which provokes a number of symptoms, including a rash, conjunctivitis, and a bout of pneumonia that often proves fatal.

To monitor the population, researchers compare the seals from photographs taken from a light aircraft of different haul-out spots in the Thames Estuary over a period of three days.

The numbers are totted up, and the final figure adjusted to account for the fact that a number of seals will always be out at sea.

Despite the fall in numbers, the research team said it is not definitive proof that the two populations of seals are facing difficulties.

Conservation biologist Thea Cox said: “It is the long-term picture that is most significant, and that’s why it is important to do these surveys on a regular basis.

“Changes in number can be down to a few factors, such as the variability in the proportion of seals at sea whilst the survey is taking place, but this is something we want to keep a close eye on.”

Ms. Cox told the PA news agency: “As top predators, (seals) are a great indicator of ecological health, so they tell us how the Thames is doing.”

The thriving seals show how far the recovery of the Thames has come since it was declared “biologically dead” in the 1950s.

“People think the Thames is dead because it is brown, but the Thames is full of life – the water quality has improved so much,” Ms. Cox said.

She continued: “Seals have always been here, but there wasn’t necessarily the data on them, so we wanted to understand how they use the Thames, where they go, and their numbers.”

“Nationally, some seal populations are going up, and some are going down, and we don’t necessarily know exactly the cause,” Ms. Cox said.

There is also competition between grey seals and harbor seals for space, and there have been instances of attacks by grey seals on harbor seals, Ms. Cox said.

Near one of the seals’ favorite haul-out spots close to Ramsgate in Kent, plenty of plastic litter is dotted around the shoreline, but it is not clear how much of a threat it poses to the animals.

“There is definitely some litter, and there have been studies showing the extent that we see that in marine mammals,” Ms. Cox said.

“But knowing the impacts of that and the population level impacts – that’s something we also don’t know yet, but there are lots of studies going into that to work out what level of threat that might be.”

Getting caught up in fishing gear, either as bycatch in nets cast by commercial fishing vessels or ghost netting, is less of a problem for the Thames seals than elsewhere, but still a cause for concern.

“Entanglement is a threat to seal populations, it is less of a problem here in the Thames, but it is definitely a threat to populations of seals in general,” Ms. Cox said.

“We are still trying to develop the evidence base about what those impacts on the animals actually are.”