You are here: Home / Culture / Londonism: 10 Things Not to do in London – London Travel Etiquette 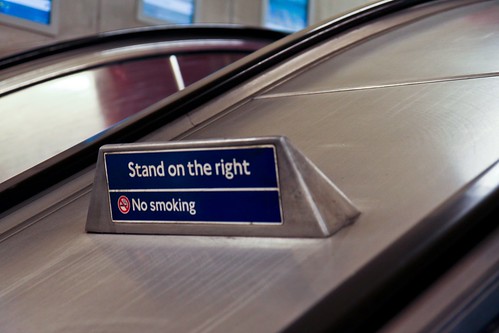 Londoners are a steely lot and sometimes it can be easy for a tourist to get on their nerves. So, we thought it would be fun to put together a list of things a tourist should not do when they come to London.

Do Not Ride the Tube During Rush Hour

The Tube is a tool used by Londoners to get to and from work. It’s sole reason to exist is to move commuters around – not for the entertainment of tourists. That means that during rush hour, the Tube means business. It’s crowded, it’s hot, it’s prone to problems. That said, Londoners are pretty annoyed when groups of tourists hog the commuting space on the Tube when it’s already hard enough to find a seat. As an aside, if you travel with Luggage on the Tube during Rush Hour, you will quite possibly be visually murdered by everyone in the Tube car. Rush hour runs from roughly from 6am-10am and from 4-6pm.

Do Not Stand on the left on the Escalators

This one is simple and there are even signs pointing this out, but people still ignore them. Do not stand on the left on an escalator. The left is the ‘passing lane’ where people in more of a hurry than you pass you by. Don’t get in their way. Stand on the right. Please.

If you’re lost, don’t just stop in the middle of the sidewalk to study your map or your iPhone. Go off to the side to find your way so you don’t get into anyone’s way.

Do Not Take a Mini-cab under any circumstances

Only take licensed Black Cabs – never take a mini-cab, they’re unregulated and the drivers don’t have to learn London’s street like a Black Cab driver has to (they rely on GPS devices).

Do Not Complain about the Rain

It’s London, it could rain at any moment. Really it doesn’t rain that much at all. But there’s no use complaining about it. Carry an umbrella and be prepared. London in the rain is sublime and lovely.

Do Not Talk about Politics

As an American or a tourist from any other country, you have no right to comment on the Politics of Britain. You’re not a local, you’ll never understand it like locals and you’re bound to offend somebody. You may think it’s cool to talk about Politics back home, but again don’t. No one is interested and you probably won’t like what Brits have to say about your politics. Just avoid the subject entirely until you really know someone and are comfortable covering the topic.

Do Not Flash Your Cash

Tourists have a tendency to flash their cash around – whether it’s paying for things on the street, counting their money or taking out a wad of cash and then asking the waiter how to figure out the bill. British money is not hard to figure out. Always keep a running tally in your head so you don’t have to whip out your cash and start counting. This will also protect you from thieves as well as not annoy a local.

Do Not Complain about your Neighborhood or Hotel

Londoners are a geographically loyal lot – I would not recommend complaining about your hotel, neighborhood or anything about London really. You may not like what’s said back to you.

Do Not Compare with Life Back home

This relates to the previous point. Don’t spend time comparing things in London to things back home. Don’t complain their streets aren’t on a grid system or that you come from an area with better weather. It’s just rude to say where you come from is better than London – why did you go there? Things are DIFFERENT in London. The sooner you learn and accept this, the better.

Do Not Talk with Loud Volume

We’ve heard this from many of our London friends – Americans (and to some extant Australians) speak a few notches louder on the volume scale than Londoners do. It’s not intentional – it’s just the way we are. We’re loud. But when travelling in London – turn it down a few notches. Londoners will appreciate it.

Are you a Londoner? What tip would you have for a tourist? What should they NOT do when in London?