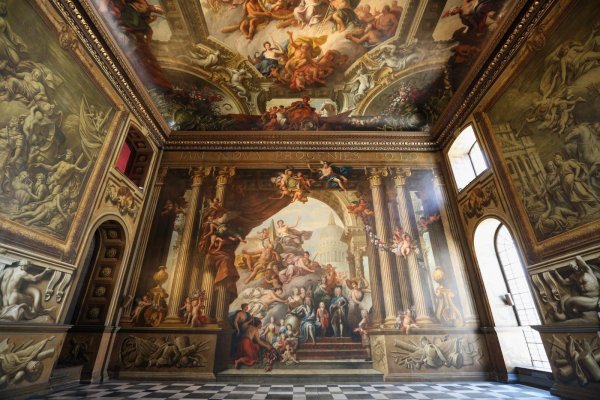 The Painted Hall is often described as the ‘finest dining hall in Europe’. Designed by Sir Christopher Wren and Nicholas Hawksmoor, it was originally intended as an eating space for the naval veterans who lived here at the Royal Hospital for Seamen. Its exuberant wall and ceiling decorations are by Sir James Thornhill and pay tribute to British maritime power.

The Painted Hall sits within the King William Court. Wren submitted designs in 1698 and the roof and dome were in place five years later. When in 1708 James Thornhill began decorating the interior, he was instructed to include many references to the importance of the navy in Britain’s fortunes. 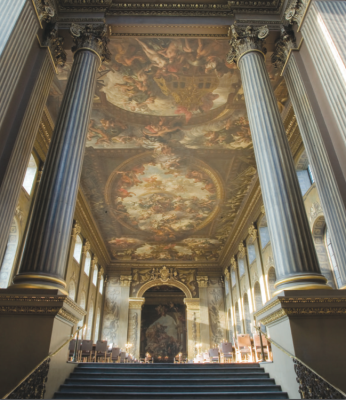 His ‘great and laborious undertaking’ was completed after 19 years, by which time the Painted Hall was felt to be far too grand for its original purpose. Respectable visitors were allowed admittance, after paying a small fee, and the residents of the Royal Hospital – Greenwich Pensioners – acted as tour guides.

Thornhill was paid only £3 per square yard (about one square metre) for the ceiling, and just £1 per square yard for the walls. However, he did receive a knighthood in 1720 and his legacy is the finest painted architectural interior by an English artist.

In 1806, 3 months after the Battle of Trafalgar the previous October, the body of Horatio Nelson was brought to lie in state in the Painted Hall.
Between 1824 and 1936, it was known as the National Gallery of Naval Art, with over 300 naval-themed paintings on display.
In 1939, it was used for dining (including breakfast) by the officers of the Royal Naval College.
The Painted Hall today

Today the Painted Hall is open to visitors free of charge. It is also still used for the purpose for which it was originally built; as a venue for dinners and formal occasions. If you would like to learn more about the Painted Hall, join one of their knowledgeable Yeomen guides on a daily tour or download the free Painted Hall interpretation guide (pdf 1.7MB). This printed guide is also available in English and other languages from the welcome desk in the Painted Hall for 50p.