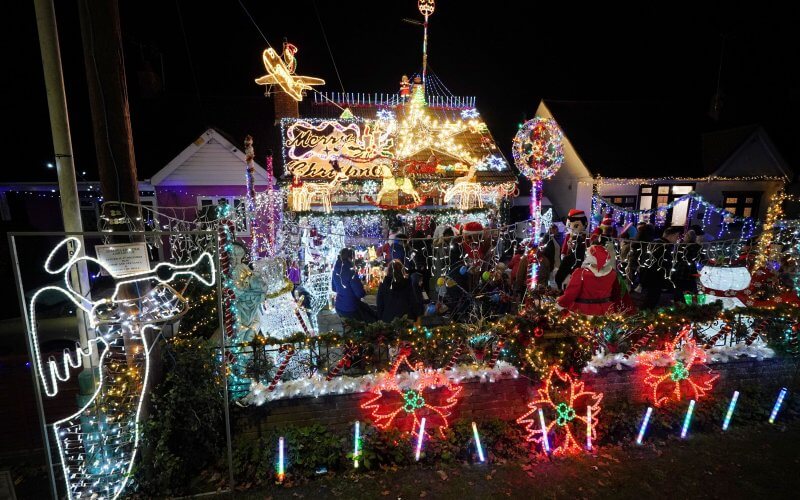 A man who was diagnosed with leukemia is raising money for a blood cancer charity by creating an elaborate Christmas display outside his and his partner’s house.

Peter Elliott, 71, has spent a month putting up thousands of lights on his home in Romford, east London, to raise money for Leukaemia Care and Great Ormond Street Hospital.

He creates the display each year to raise money for GOSH and other charities, but decided to raise funds for the cancer charity this year following his treatment.

Mr. Elliott was diagnosed with leukemia in February 2021. He created a pared-down display last year as he had Covid-19 at the time.

However this year the display has returned to its full glory and features Santa’s grotto with rocking horses, five Father Christmases, elves, reindeer, and stars.

There is also a 17ft star on the roof of his home, which he shares with his partner Lesley Haylett, 61.

Mr. Elliott told the PA news agency: “I’ve been doing it every year for about 38 years. Every year I try to do something different – so I’ve built gingerbread houses, castles, pirates’ things, lots of different things.

“Every year we raise money for GOSH because my grandchild was in Great Ormond Street years ago, and this year Leukaemia Care, because they’ve been really supportive after I was told my blood count was low and needed to be checked out. I just think it’s a good way to show your appreciation.”

He added: “It started off with just a string of lights. We’ve got some elderly people who live across the road and they sent us a Christmas card saying how much they liked the lights, and it’s just grown from there. People come and see it from all over.”

One feature from the couple’s display is missing this year.

Two 6ft statues of comics Laurel and Hardy, which Ms. Haylett bought for her partner 40 years ago, were stolen from outside their home in the summer.

A £10,000 reward for their safe return has been offered by Dean Floyd, on behalf of his construction company, Chigwell Group, but the statues have not been seen since.

It was the fourth time they had been stolen. Last time they returned after three years.

Mr. Elliott said: “Hopefully they’ll come back. I was gutted when they were nicked again. The house is known for them and the Christmas decorations.

“I found out they’d been taken when I was in hospital for a bone marrow transplant. They didn’t want to tell me they’d gone again.”

He added that he was delighted that he was able to make the display this year as it was a little “touch and go” because of his diagnosis.

“It feels terrific to see it done,” he said.

Ms. Haylett said: “We’re really proud of him. A lot of people get cancer and then just lock themselves away. But he’s just been trying to carry on as he always does.”