Mail Rail is London’s newest subterranean heritage attraction. Open from 4 September 2017; the disused postal railway tunnels have been brought back to life as a visitor ride for the first time in their 100 year history. This miniature railway was the world’s first driverless, electric railway and was never intended for passengers.

While The Postal Museum opened on 28 July 2017, in a converted printing factory, we’ve had to wait longer for Mail Rail to be open. But has the wait been worth it? Well, if I tell you I’ve been on it twice already and I’d happily go again I think we have our answer.

Across the road from the Postal Museum is the Royal Mail Mount Pleasant Sorting Office, and under there is the Mail Rail. 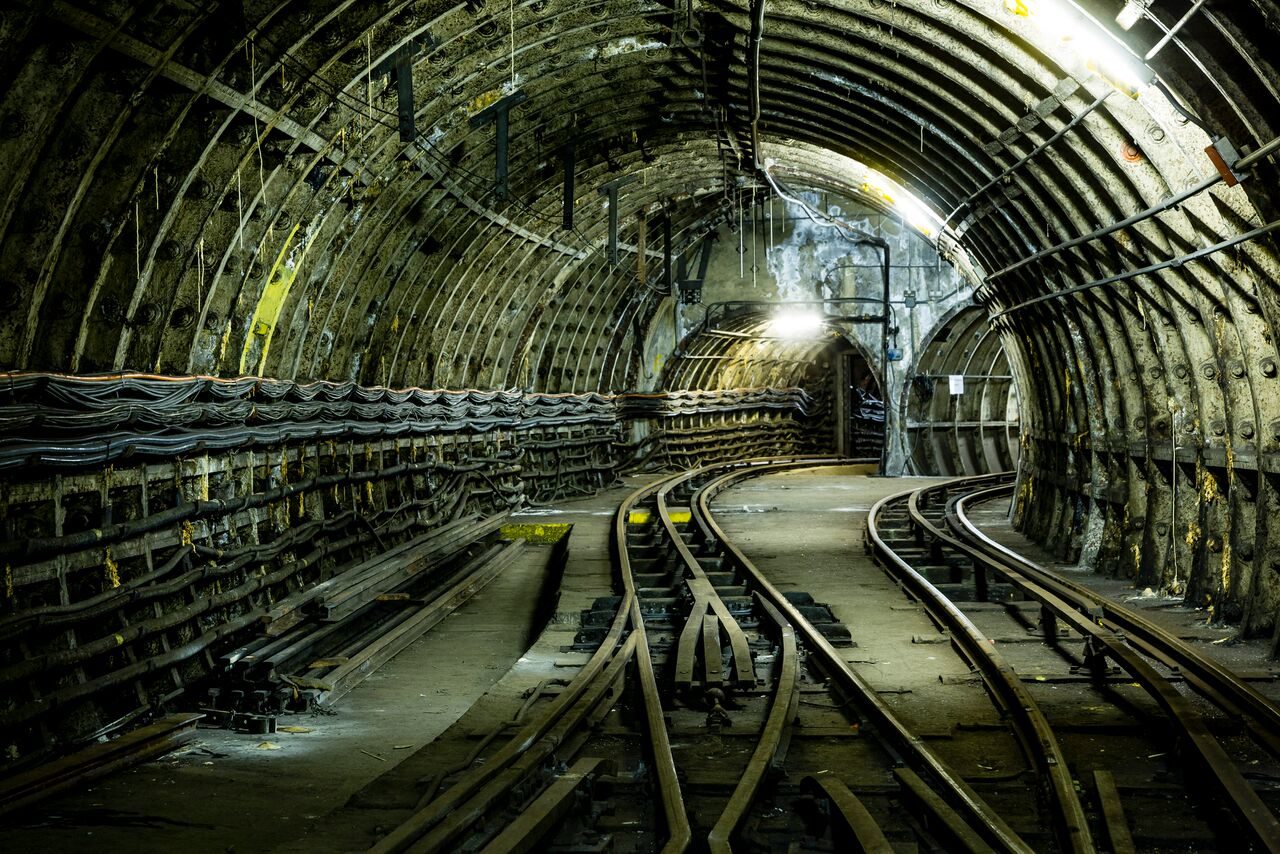 By 1909 London roads were so congested that mail coaches travelled at less than 7mph so a solution was needed. Construction of the railway started in 1914, and the tunnel was dug by hand. Work stopped during WWI and started again after 1918. The postal railway opened in 1927 and ran for over 75 years.

The full railway route of this unique narrow gauge railway – 0.6m (2ft) gauge – is 6 miles west to east under central London, from Paddington to Whitechapel. (Mount Pleasant Sorting Office was in the middle of the route.)

The postal railway tunnels are 20 metres below ground, and the trains could run at up to 30mph.

Previously hidden from the public, visitors now enter at the former engineering depot of the 100-year-old Post Office railway. 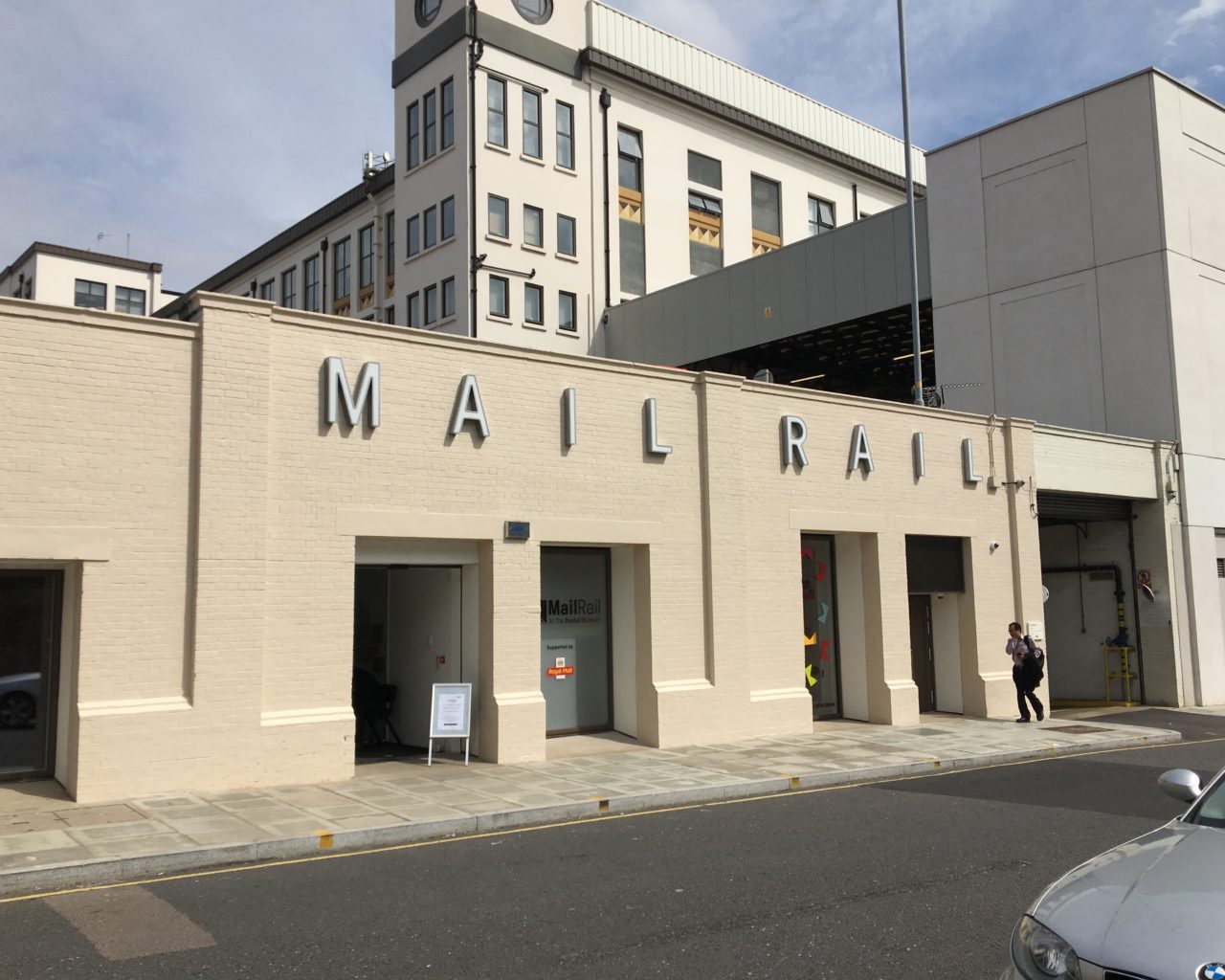 There’s a well-stocked shop at the entrance to Mail Rail before you go down the stairs to the railway itself. It all still feels very industrial with lots of concrete.

There’s a large Lobby area with a video screen so you can find out more about Mail Rail if you arrive early. 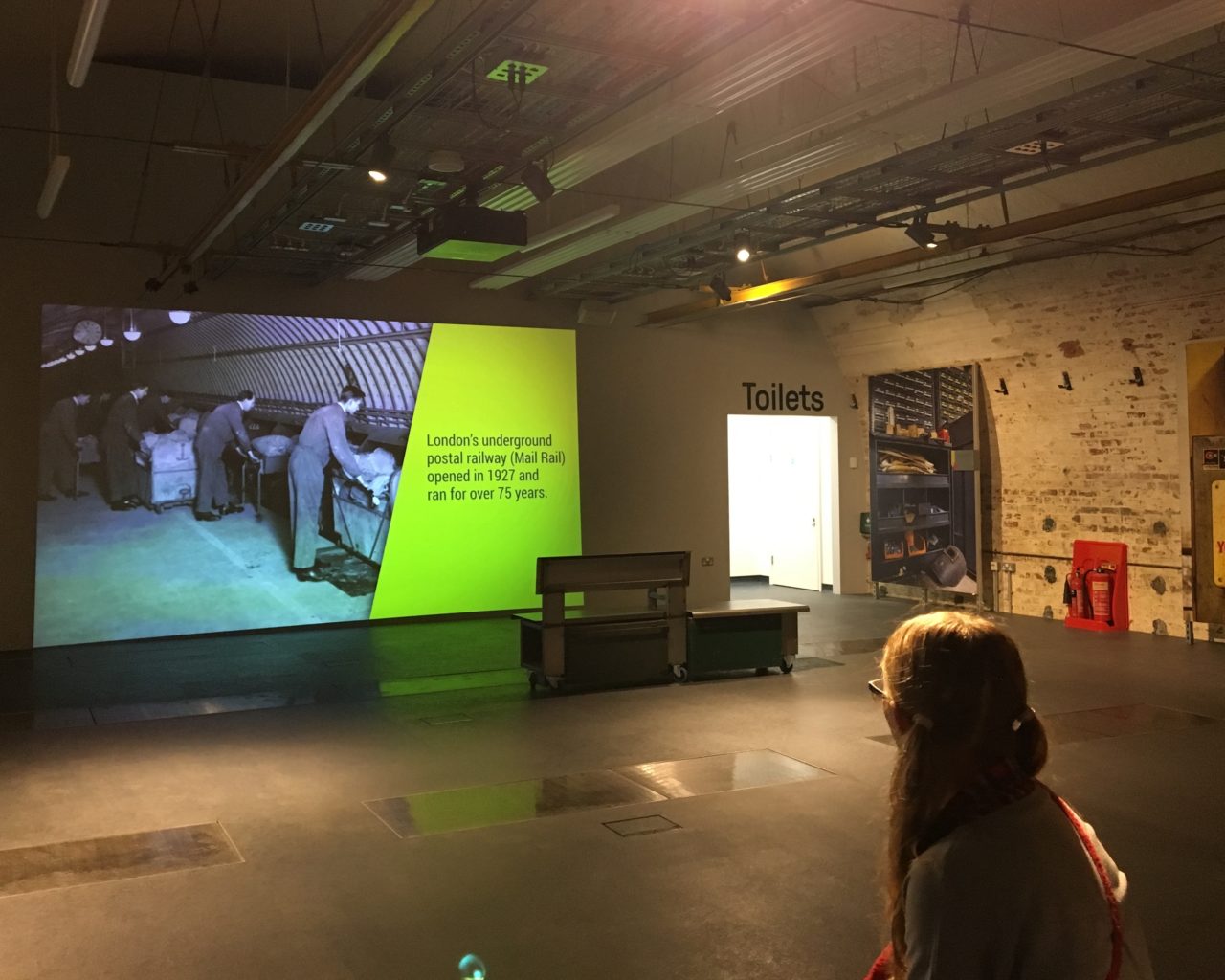 Once it’s time for your ride, you are asked to leave coats and bags in a cupboard on the platform due to the small amount of space inside the train compartments. You then line-up and, when all are ready, you choose your seat. These trains do have a driver, so there’s no need to try and rush for the front seat. 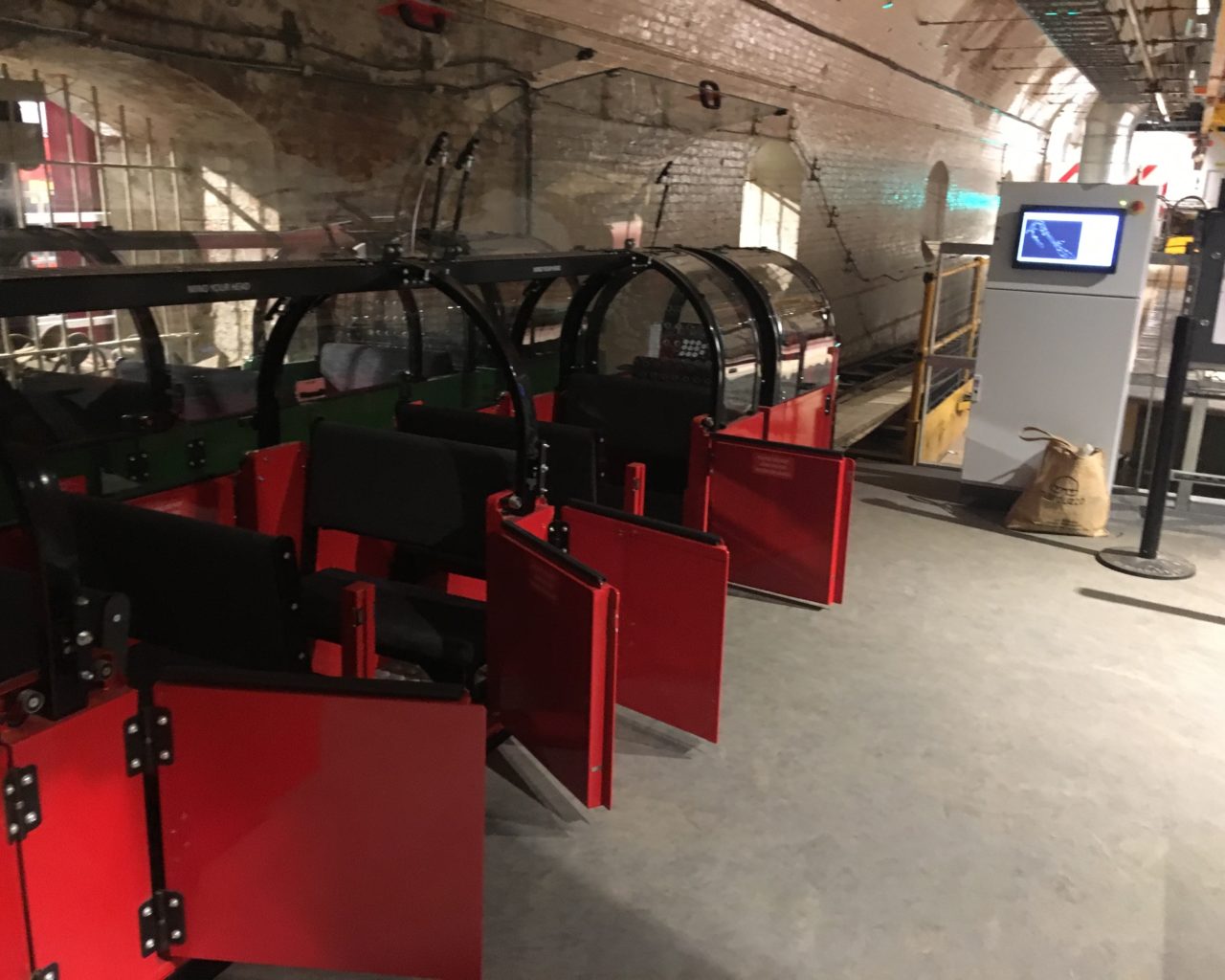 It is a little cramped inside as there is only room for 1-2 people on each seat. If you are taller, you may find it even more cramped, but I saw men, women, and children all able to cope for the 16-minute ride.

You can take photos and videos so don’t forget your phone or camera.

Throughout the journey, there’s an audio guide from Andy and Ray. Andy worked here for 27 years as an Engineer, and Ray still works here although he is about to retire. It’s a great way to bring the history to life.

The Mail Rail train ride has stops at the original, and largely unchanged, station platforms. See if you can spot the dart board as the postal workers often played darts between trains arriving.

As you travel through the tunnels, you also travel through time with video projections on the walls and the platforms, giving you history about the impact of the railway and the innovation of the postal service.

The first stop has video projections for each decade.

The railway was rebranded as ‘Mail Rail’ to mark its 60th anniversary in 1987, and Bruce Willis filmed Hudson Hawk here in the early 1990s. (I couldn’t resist re-watching this movie to see the Mail Rail as the secret Vatican railway.)

The 1970s was about the arrival of postcodes (zip codes) and the many strikes.

The 1950s talks about airmail becoming more popular after WWII, and the 1940s shows The Blitz bombing in London. The railway was bombed several times with a direct hit in 1943, yet it was back up and running the next day proving how vital a service it offered.

As the Mail Ride train ride is a loop, you pass by a tunnel entrance leading to Liverpool Street in the east. The stop here talks about the River Fleet flooding. 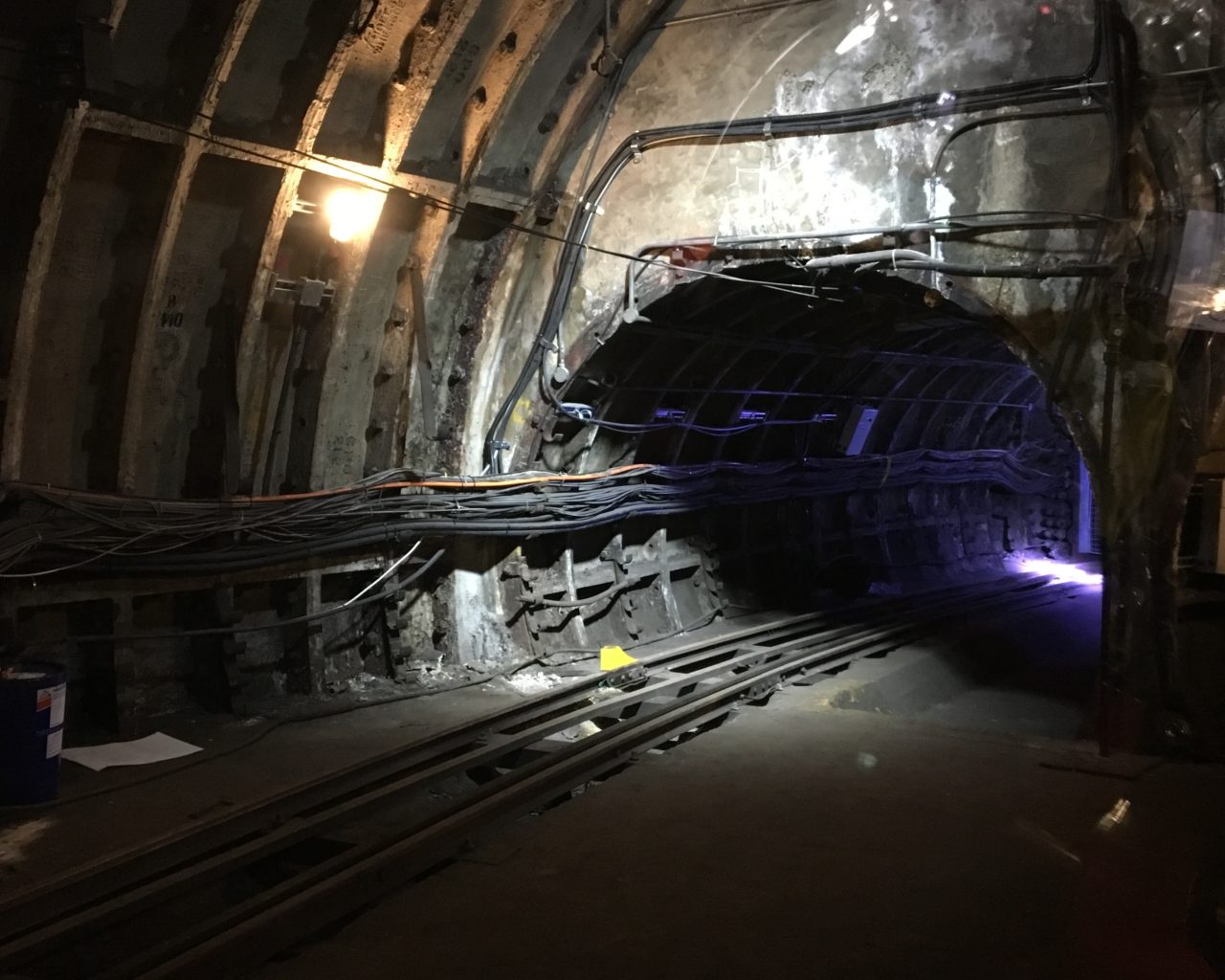 Near here, you get a glimpse of the ‘train graveyard’ where the disused trains are kept.

The next stop is slightly unnerving as you think there’s a problem with the train as it stops rather abruptly and everything goes dark. But there’s no need to panic as it’s simply demonstrating the frequent power cuts the railway had to cope with. When this happened for the postal railway, the train could draw power from the next station. I will admit, the noise when the lights are out made me think Doctor Who was going to arrive! 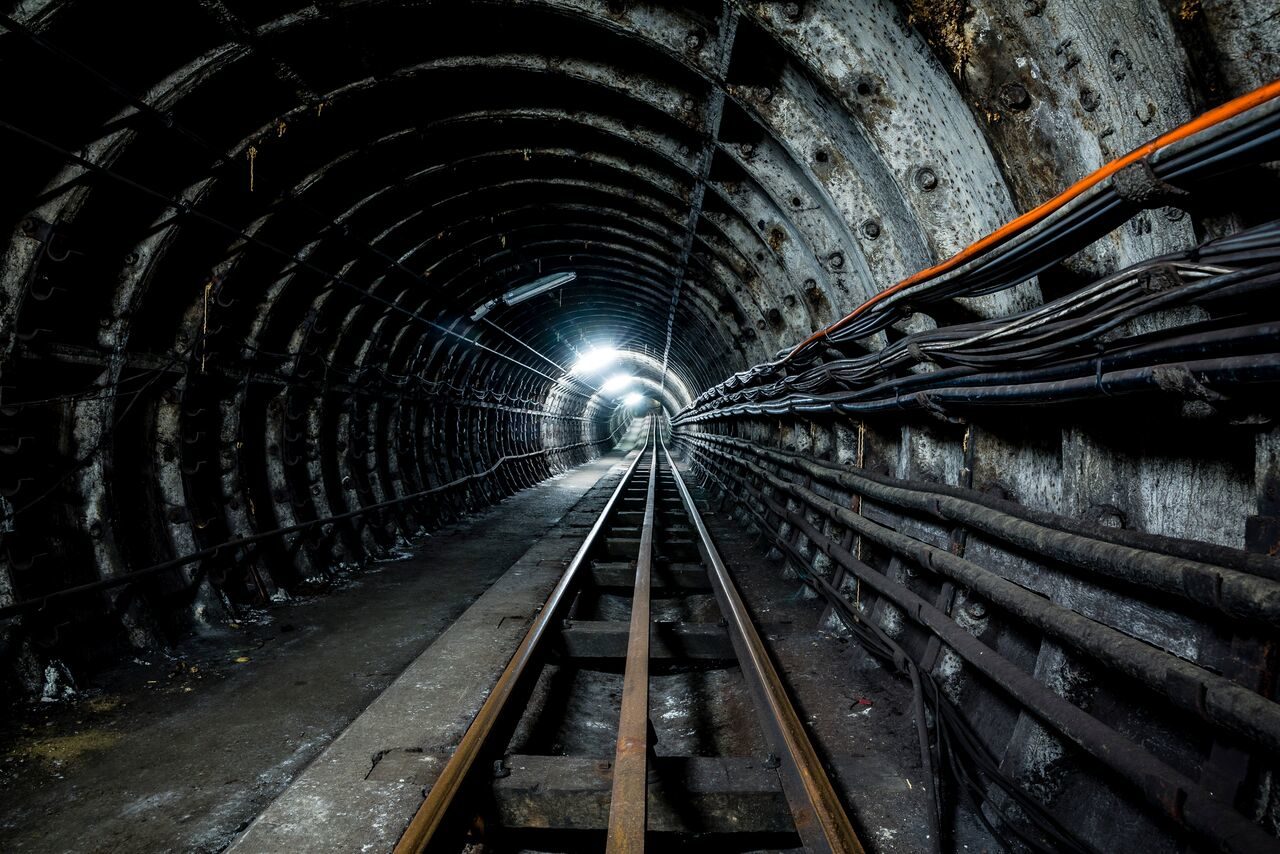 The last stop is at a platform with video projections of three stories from the 1930s:

Incredibly, at this time the postal railway was moving 4 million letters a day!

The ride ends soon after this stop and, once you collect your bags, you can explore the exhibition.

This building has a small display area of exhibits about the history of Mail Rail, plus some interactives too. 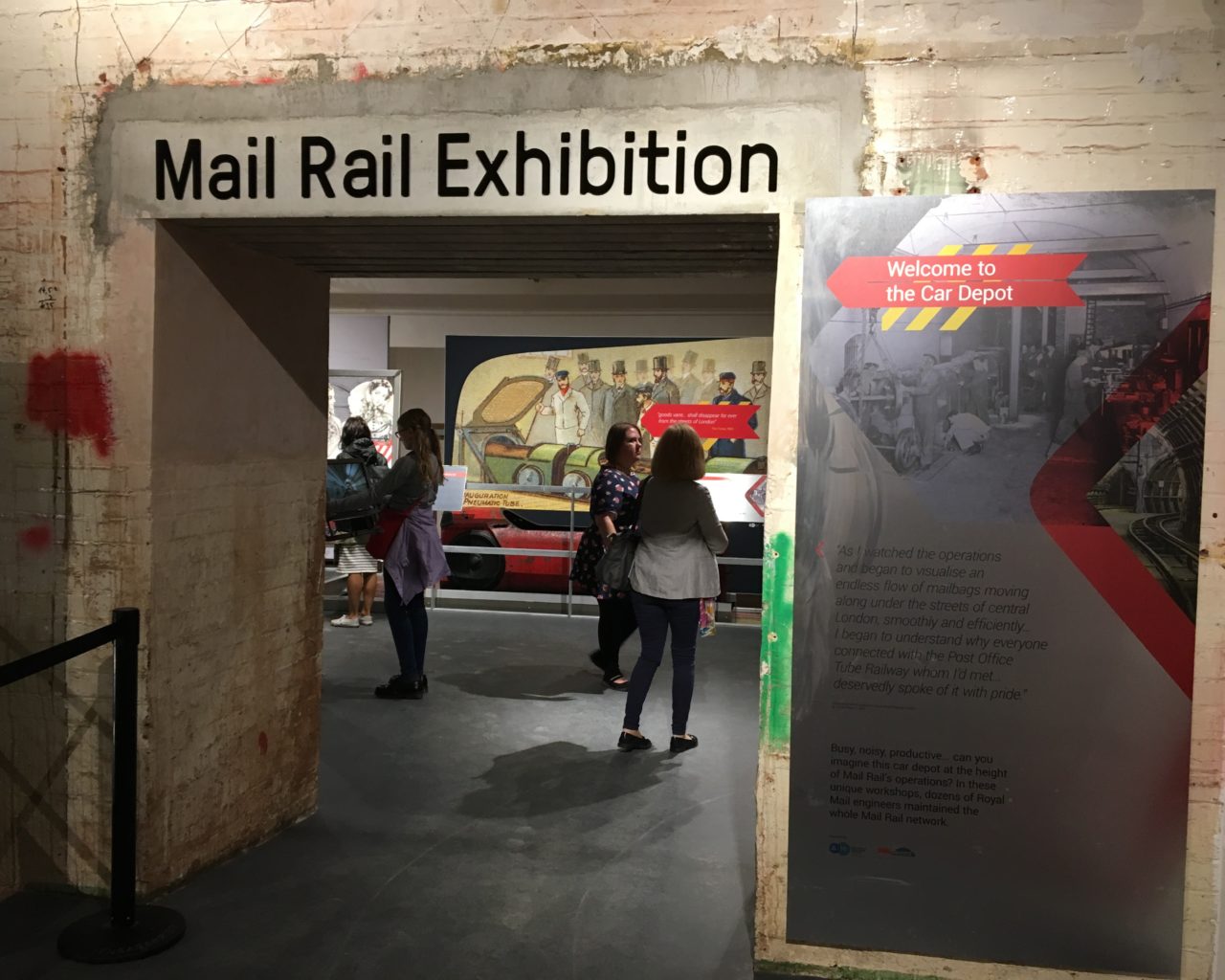 Once you’ve posed for a photo pretending to drive a train, have a look at the staff lockers. Quite shockingly, the loyal Mail Rail workforce was not warned about its closure. They came to work on 30 May 2003 and were told they had to leave that day. Their lockers are still there with many personal items inside, just as they left them.

Next, to these you can try on a hard hat and overalls for more photo opportunities. 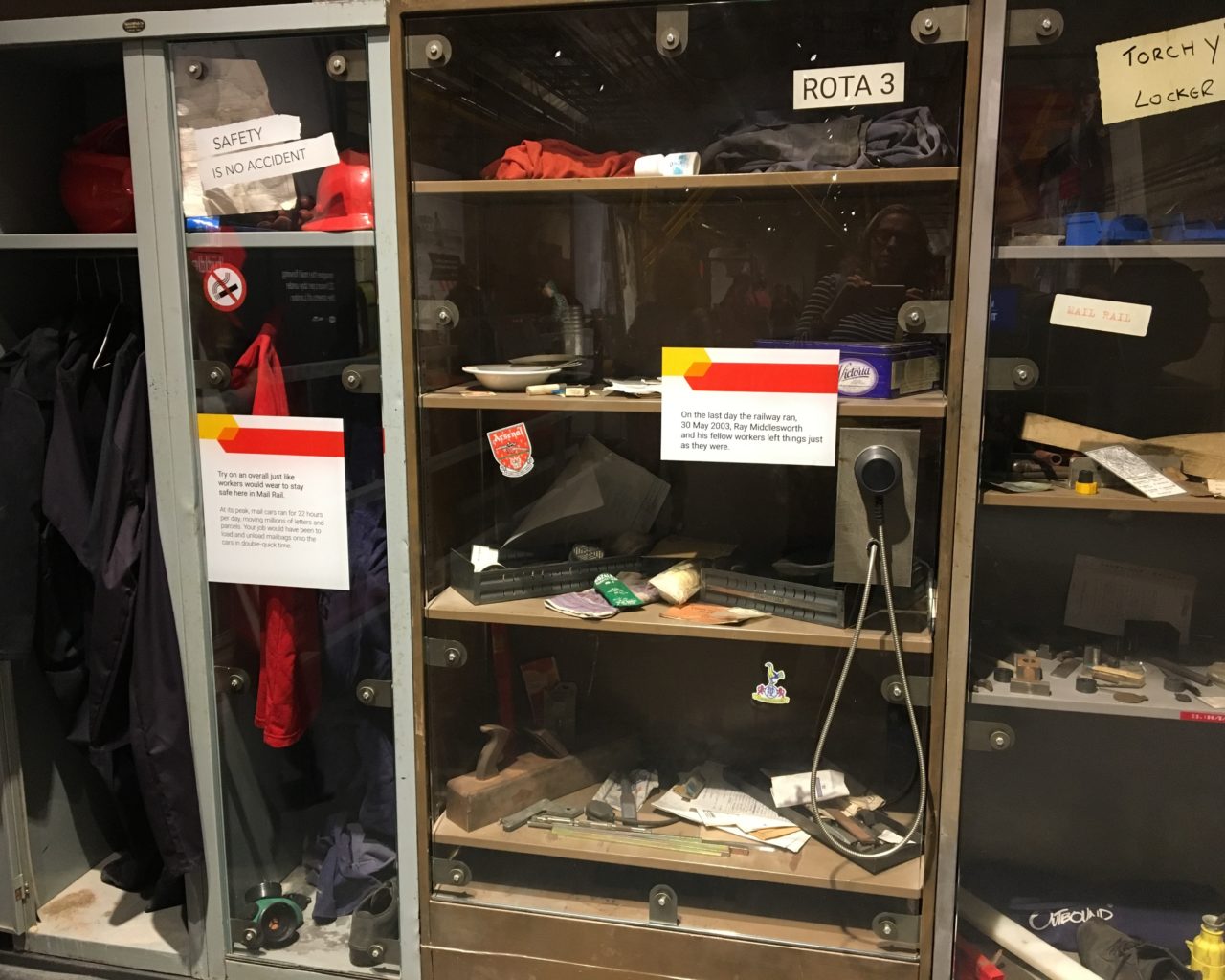 The displays here include a ‘time telescope’ to see the Mail Rail network before the ride and exhibition were installed. And there’s the remains of a Victorian pneumatic rail car – a 1860s predecessor to Mail Rail. 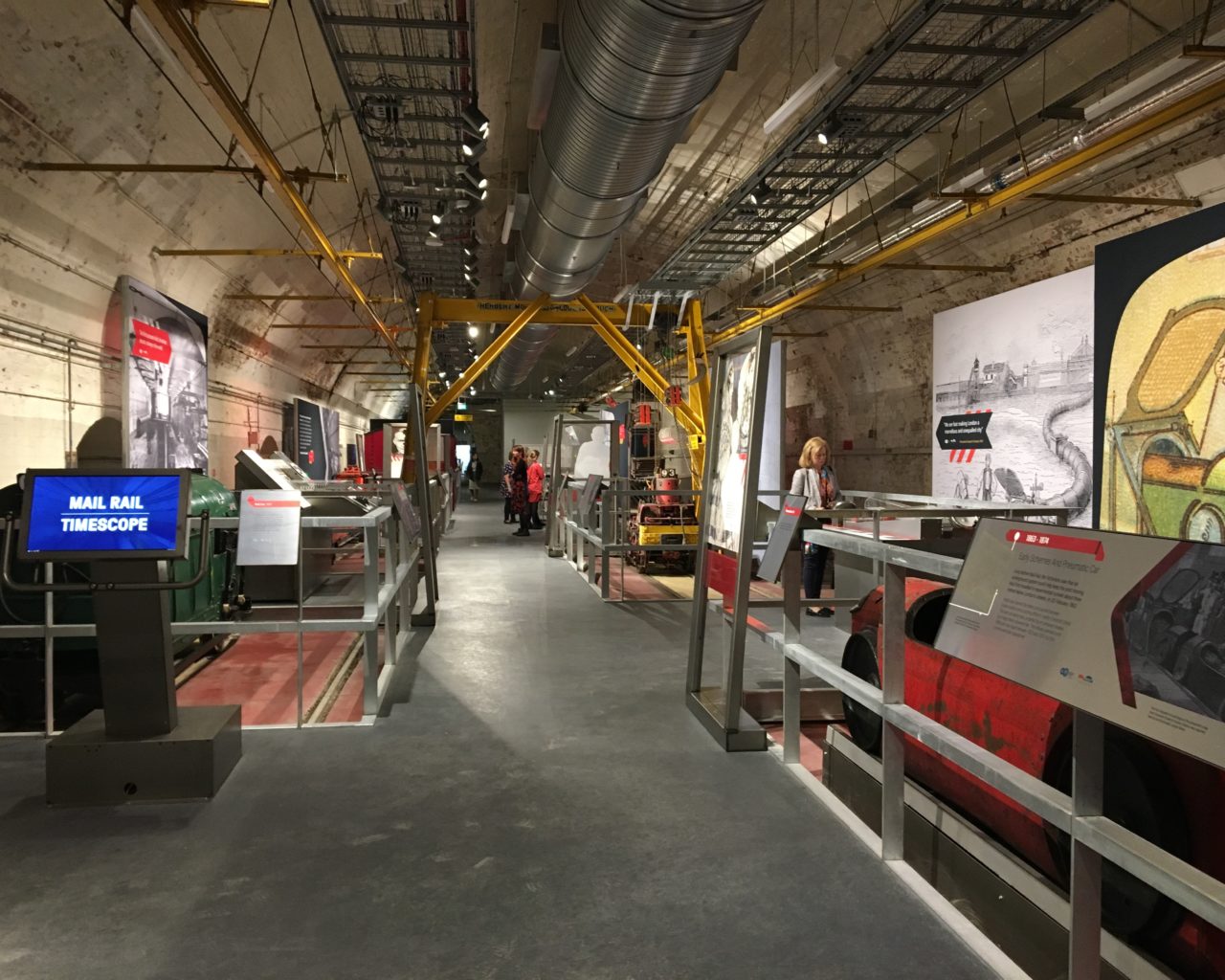 The really fun thing here is the Travelling Post Office. You can dress up (jacket and hat) and then go inside with a friend to sort the mail. The floor starts shaking, and you both have to race the clock to get your letters organised. 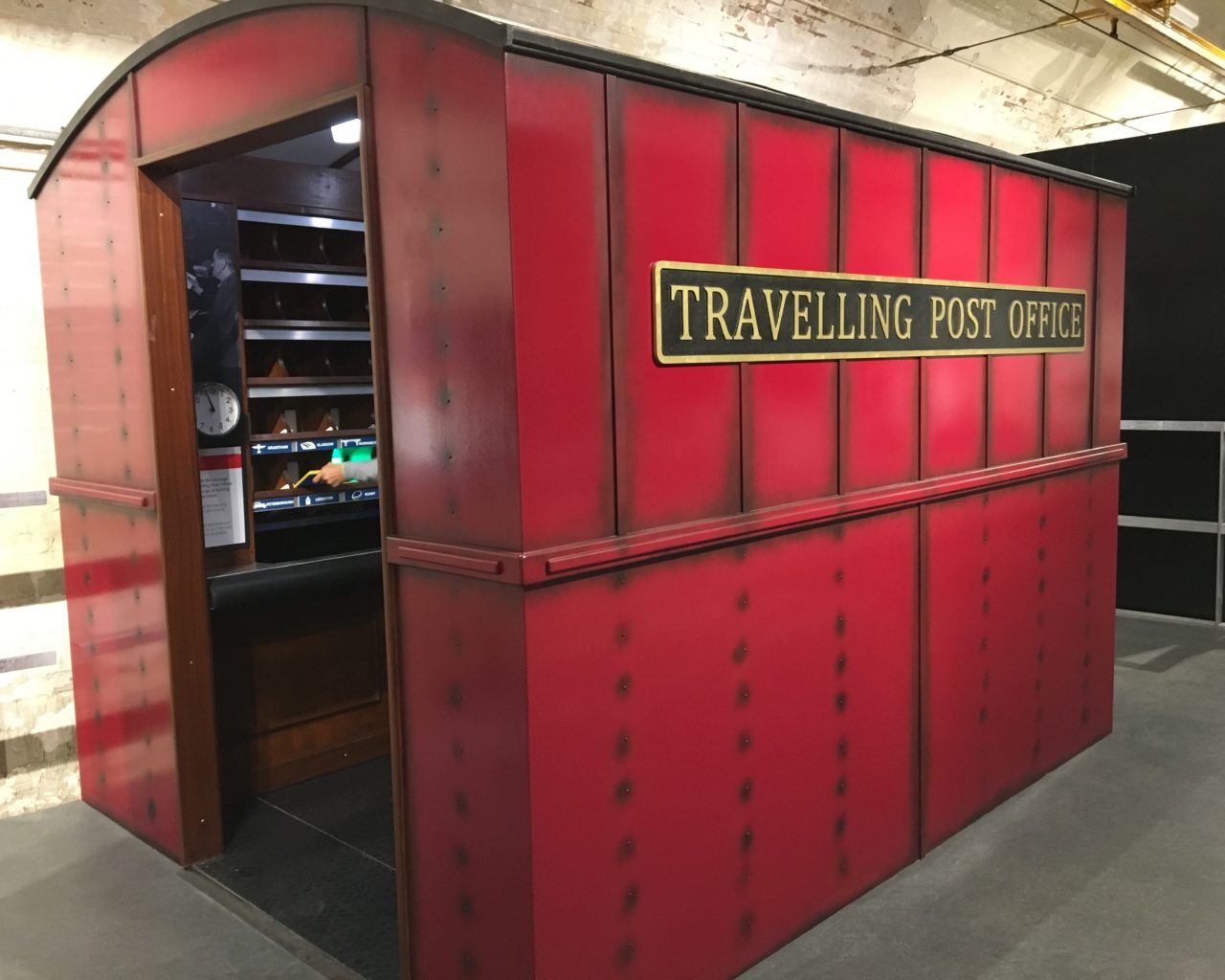 Back up on the ground floor, next to the Mail Rail shop, is Sorted! – The Postal Museum’s dedicated under 8s play area. I’ve had a look inside with some children, and they were thrilled with the miniature world where they can sort the mail, run a Post Office, drive a wooden vintage post van and then be a postman and deliver the mail too. 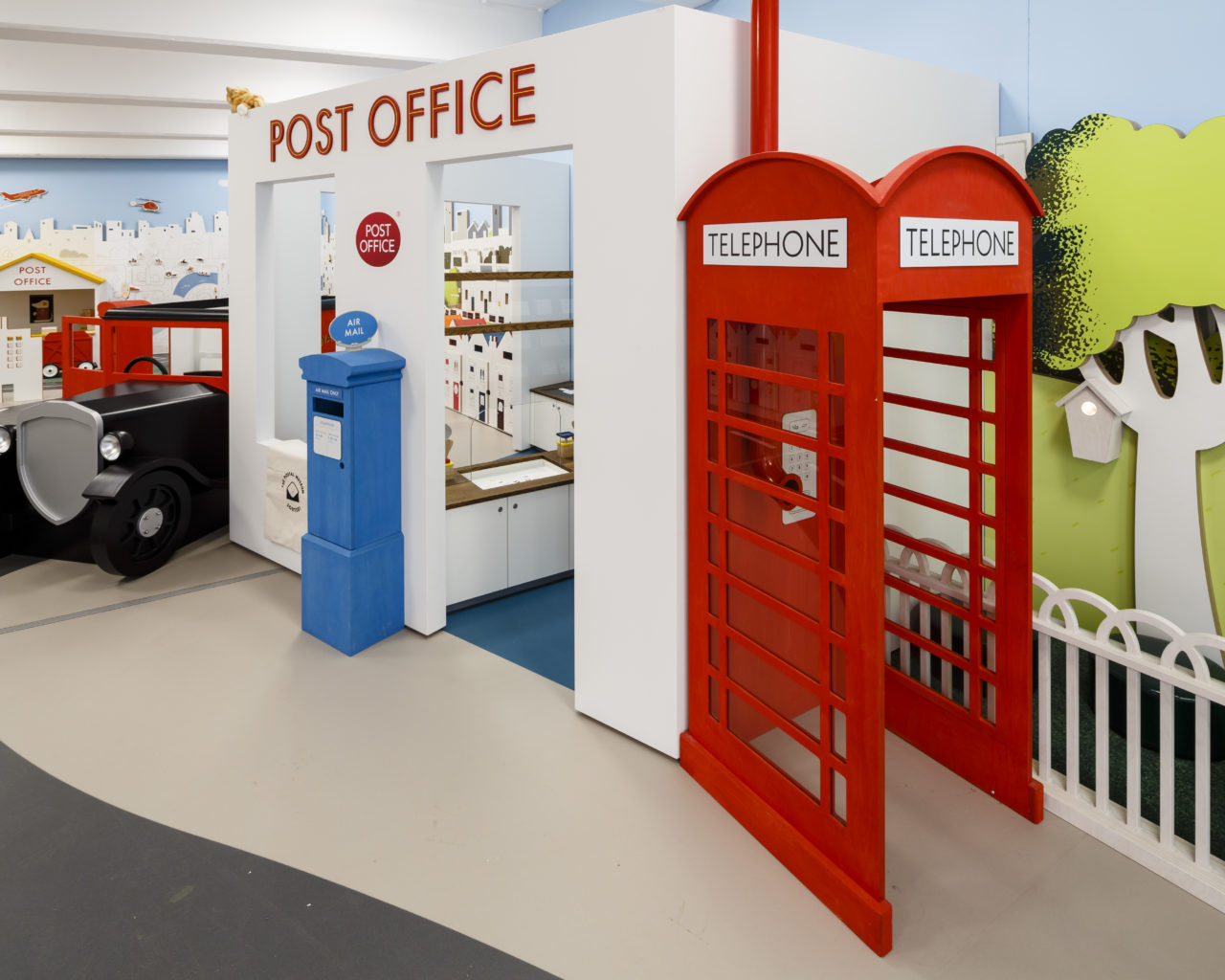 Back across the road, you’ll be grateful for the cafe here which has indoor tables plus outdoor courtyard seating. 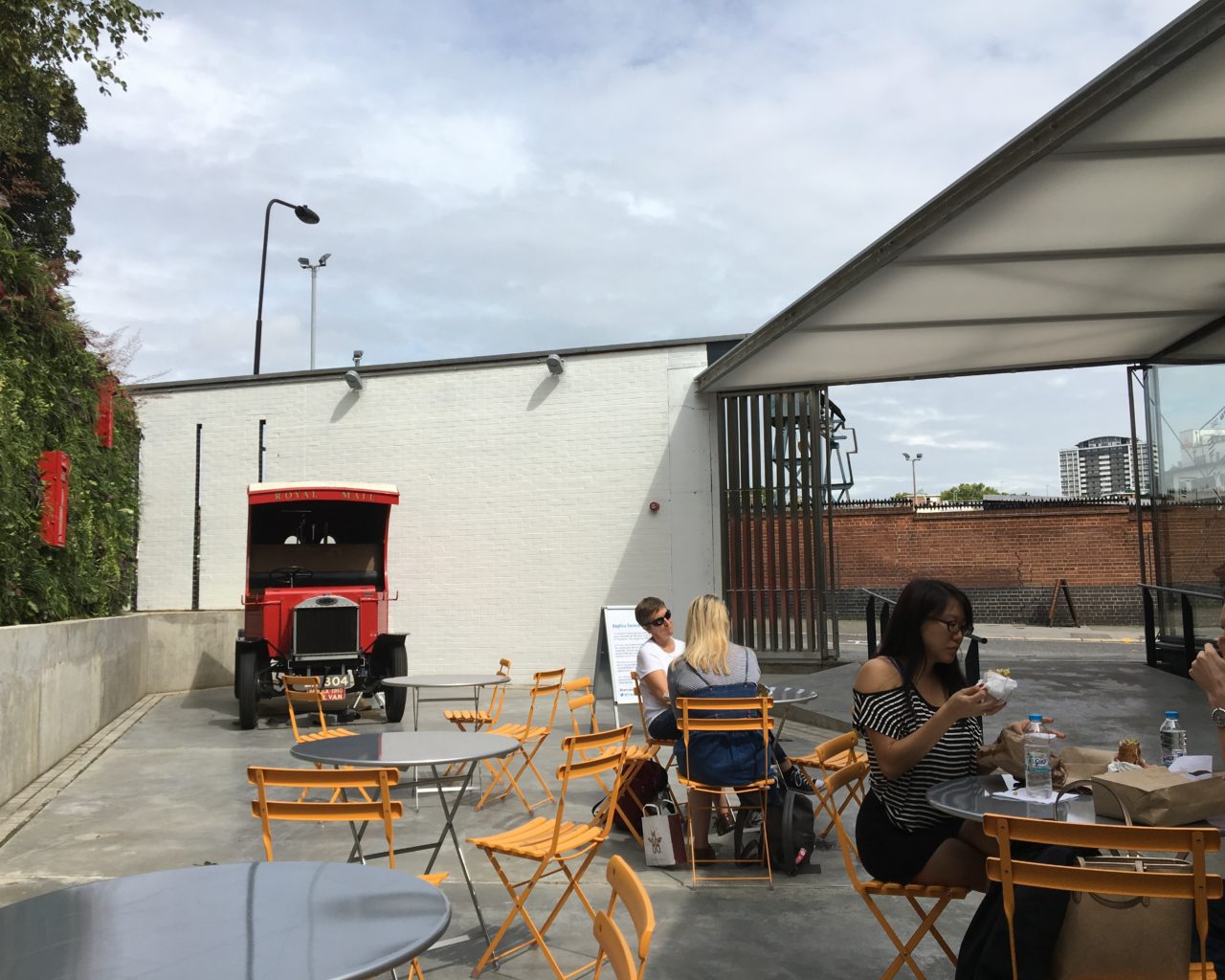 There’s also another shop which includes such delights as cuddly telephone and post boxes.

Once you’ve had a pot of tea, it’s time to gain an insight into some of the quirky social history behind an incredible British invention – the post. 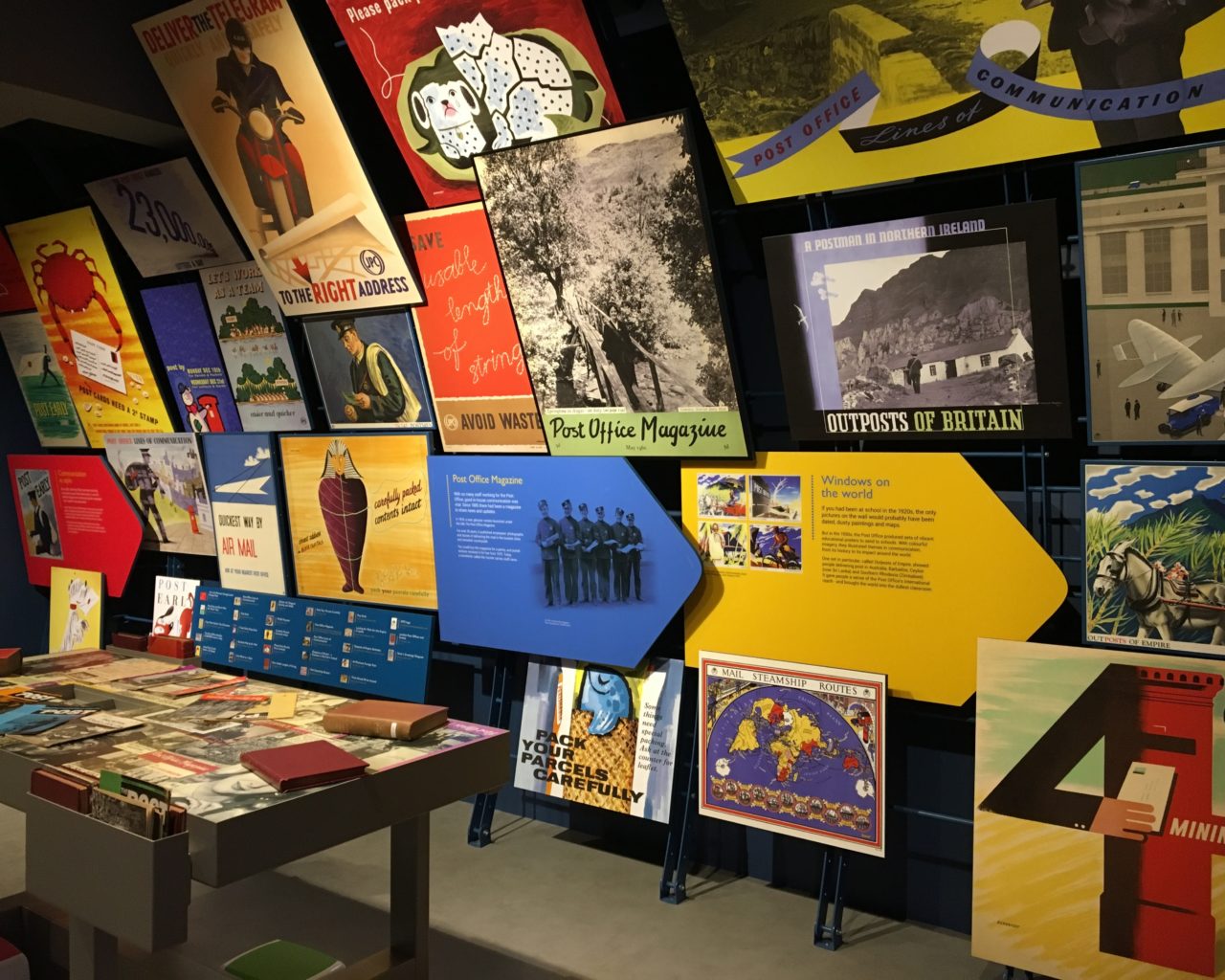 Inside the museum, there’s a wealth of items tracing the history of the postal service from its beginnings, back in the days of Henry VIII, up to the present day. It’s divided into five zones covering five centuries of curiosities.

We are the only country which does not have the name of the country on our stamps, just the Queen or King’s head. This is because the UK was the first country to use stamps. The cast of the portrait used for our Queen’s stamp profile is on display.

I was impressed by that until I noticed the machines next to it where you can take a photo and create a pretend stamp then email it to yourself. 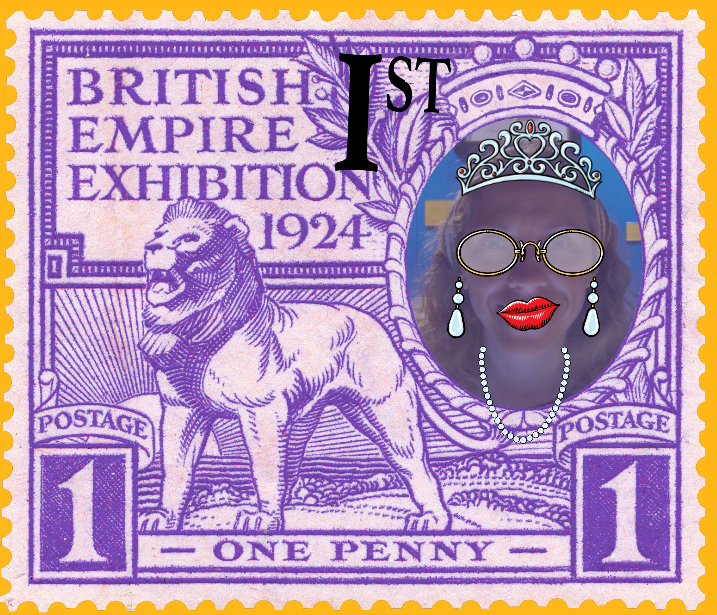 The other fun thing for families is the pneumatic tube running across the ceiling of the museum so visitors can send messages to people on the other side. The idea is based on an experimental 40-mile pneumatic network to send messages around London by air pressure, connecting the Central Telegraph Office directly with Parliament and the Stock Exchange. 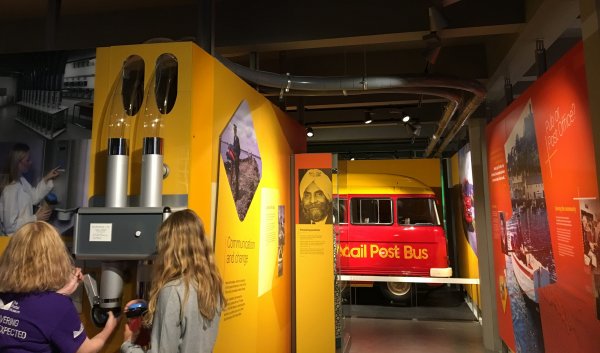 One complaint has been that The Postal Museum is too family-friendly so if you’d like to see more of the archives, you can visit The Discovery Room (upstairs in the same building) from Tuesday to Saturday for free.

General Admission to The Postal Museum and a timed ticket for Mail Rail: £16

The Postal Museum only: £11

There are reduced rates for children but only under 1s go free.

Do note; you cannot buy a ticket just for Mail Rail (but, of course, you don’t have to visit The Postal Museum as well).

Tickets for Mail Rail have been selling out as soon as each batch is released, so they have now announced there will be a limited number of walk-up tickets available each day. These can’t be reserved, so it’s simply on a ‘first come, first served’ basis. We advise signing up for the Postal Museum Mailing list so you can get notified when tickets become available.