You are here: Home / History / All Roads Lead to Nelson: The History of London’s Roads 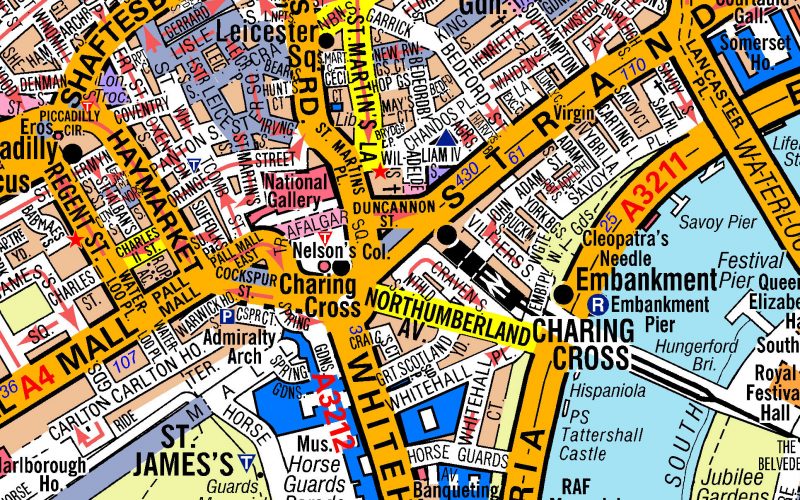 Prior to the arrival of the Romans, there were no real roads in London or the United Kingdom; in fact, there wasn’t even a London.  The Romans founded the city in 43 AD, and as was usual for their expansion of the Empire, they brought roads with them.  Being the center of Roman Britain, roads began in London and stretched out to the remainder of Great Britain, facilitating the movement of troops and supplies.  The primary hub of the roads was where the City of London is today, and while they formed the basis of the city’s road system, virtually everything that remains of Roman London (apart from the walls) are entirely underground.

When the Romans left in the 5th Century, the knowledge of road construction and maintenance went with them.  It took invasions by the Angles and the Saxons to begin new roads in the city.  From isolated farms, Anglo-Saxon villages appeared that became linked to London by new roads.  The Anglo-Saxons nearly doubled the number of roads in the area that now comprises Greater London, and unlike the straight roads preferred by the Roman military, Anglo-Saxon roads tended to follow river beds and valleys, making them more winding.

Unfortunately, there isn’t much in the way of historical record to document the growth of the city’s roads between the Roman invasion and that of the Normans.  Some Saxon charters offer ideas of how the roads expanded, but it wouldn’t be until the Normans that more detailed accounts were made.  During the Medieval period, roads grew in their importance, permitting the king’s ministers and armies to travel to remote parts of the kingdom while also bringing trade into and out of London.  The 14th Century map bequeathed by Richard Gough to the Bodleian Library at the University of Oxford showed a national road system that centered on the city.

The city started to grow significantly in the Tudor period, with some 200,000 people flocking to London from other parts of the country.  Perhaps one good thing to come of King Henry VIII’s Dissolution of the Monasteries was that it provided new land for London to expand, which in turn meant creating more roads to link redeveloped areas.  The next major development occurred with the several Turnpike Acts beginning in the late-17th Century.  These acts marked the first time that tolls were instituted on major roads leading out of London in order to provide funds for their maintenance.

Going into the 18th and 19th Century, the beginning of the Industrial Revolution swelled London’s population from 630,000 to 2 million people.  During this time period, a very dense and complex network of roads connected many villages in the surrounding counties to London.  Roads continued to grow and connect with one other, leading London to become an incredibly congested city for road traffic, even though that traffic was mostly horse-driven.  This was not a problem that was addressed as London grew, leading to increased traffic issues as the years passed.

It wasn’t until the early 20th Century that London’s transport organizations began to see the need for road planning.  Between 1913 and 1916, several conferences were held amongst the local authorities to unite London’s road plans.  These talks led to the construction of the North Circular Road, the Great West Road, and several bypasses.  Several more ring roads were constructed in the early part of the 20th Century, but it was in the 1960s when the scheme really took off, resulting in the construction of Ringways 1, 2, 3, and 4, which either created new roads or expanded previous connections such as the North Circular Road.  These effectively became part of the motorways.

While no formal plan was ultimately adopted for the city, some experts believe this has been to the city’s benefit.  Making it difficult for cars to operate within London, they feel, has turned many towards using public transport.  During his time as Mayor of Greater London, Ken Livingstone instituted a congestion charge that served to reduce traffic within parts of inner London.  While work on roads is ongoing, making it easier to move within the city appears to be currently antithetical to London’s goas to reduce traffic.